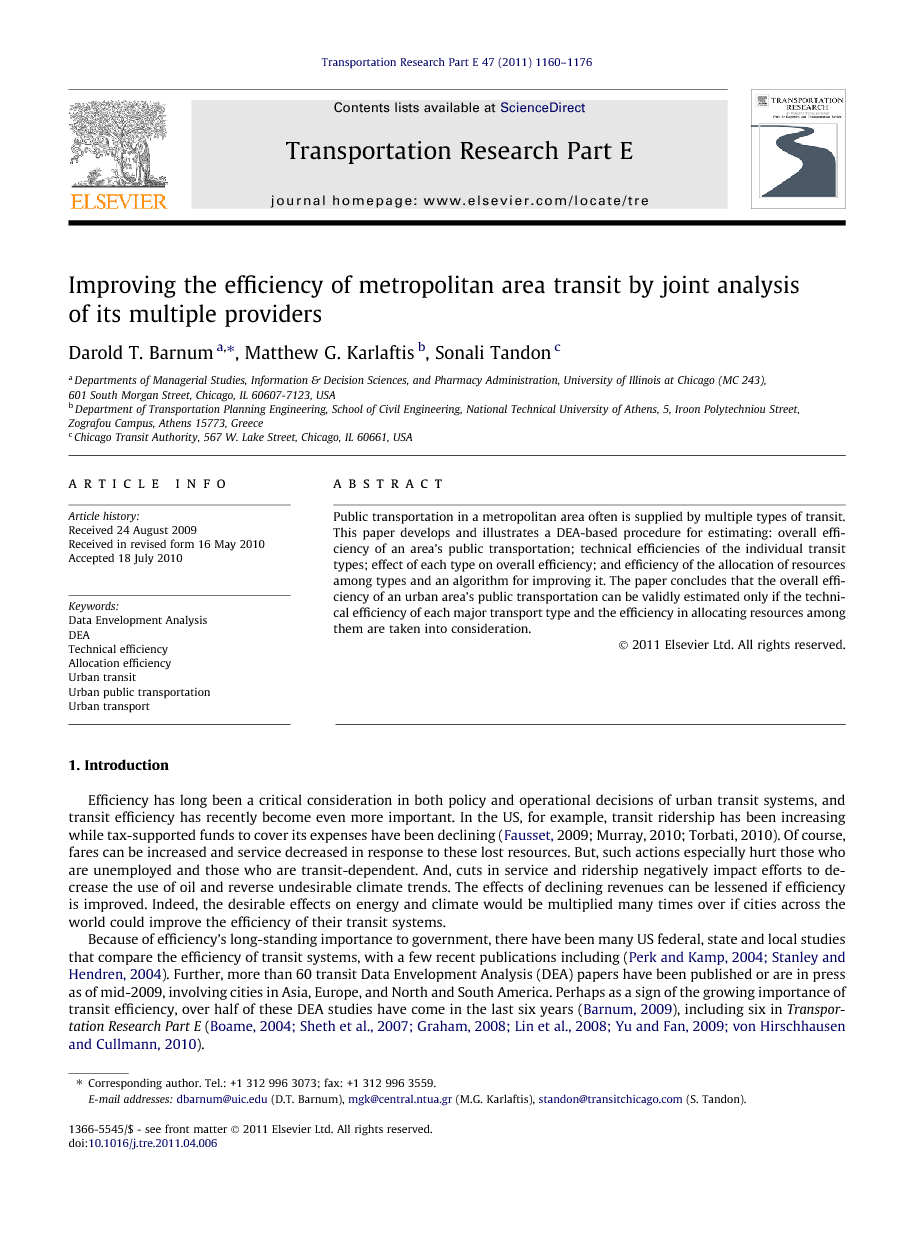 Efficiency has long been a critical consideration in both policy and operational decisions of urban transit systems, and transit efficiency has recently become even more important. In the US, for example, transit ridership has been increasing while tax-supported funds to cover its expenses have been declining (Fausset, 2009, Murray, 2010 and Torbati, 2010). Of course, fares can be increased and service decreased in response to these lost resources. But, such actions especially hurt those who are unemployed and those who are transit-dependent. And, cuts in service and ridership negatively impact efforts to decrease the use of oil and reverse undesirable climate trends. The effects of declining revenues can be lessened if efficiency is improved. Indeed, the desirable effects on energy and climate would be multiplied many times over if cities across the world could improve the efficiency of their transit systems. Because of efficiency’s long-standing importance to government, there have been many US federal, state and local studies that compare the efficiency of transit systems, with a few recent publications including (Perk and Kamp, 2004 and Stanley and Hendren, 2004). Further, more than 60 transit Data Envelopment Analysis (DEA) papers have been published or are in press as of mid-2009, involving cities in Asia, Europe, and North and South America. Perhaps as a sign of the growing importance of transit efficiency, over half of these DEA studies have come in the last six years (Barnum, 2009), including six in Transportation Research Part E ( Boame, 2004, Sheth et al., 2007, Graham, 2008, Lin et al., 2008, Yu and Fan, 2009 and von Hirschhausen and Cullmann, 2010).

This paper presents a Data Envelopment Analysis (DEA) protocol for analyzing the efficiency of metropolitan transit agencies that oversee multiple types of transportation service. The protocol is illustrated by applying it to US transit agencies that can serve their cities with four types of subunits: self-operated motorbus, outsourced motorbus, self-operated paratransit, and outsourced paratransit. DEA scores that are estimated for a target agency include: (1) overall efficiency of the target agency as a whole, (2) technical efficiency of each of the target agency’s subunits when each subunit is compared only to other subunits of the same type, (3) effect of changes in each of service type’s efficiency on its parent agency’s efficiency and (4) the agency’s allocation efficiency in apportioning resources among its subunits. Finally, a mathematical programming algorithm is illustrated that allocates target agency resources to its subunits with the objective of decreasing the cost of transit in the urban area while holding total service constant. The protocol thereby provides a comprehensive audit of a target transit agency’s efficiency in supplying service to its metropolitan area, including recommendations for improvement. This paper contributes to the literature by comprehensively addressing metropolitan area transit efficiency issues that have heretofore been ignored or done incorrectly. It is the first to validly identify the individual technical efficiencies of each type of transit employed in an urban area, to identify allocation and technical efficiency in the DEA aggregated score for all transit types, to estimate the effect of changes in each type of transit’s efficiency on the overall public transportation efficiency, to estimate the efficiency of the metropolitan area’s allocation of funds among its transit modes, and to offer a method for reallocating resources in order to improve efficiency.