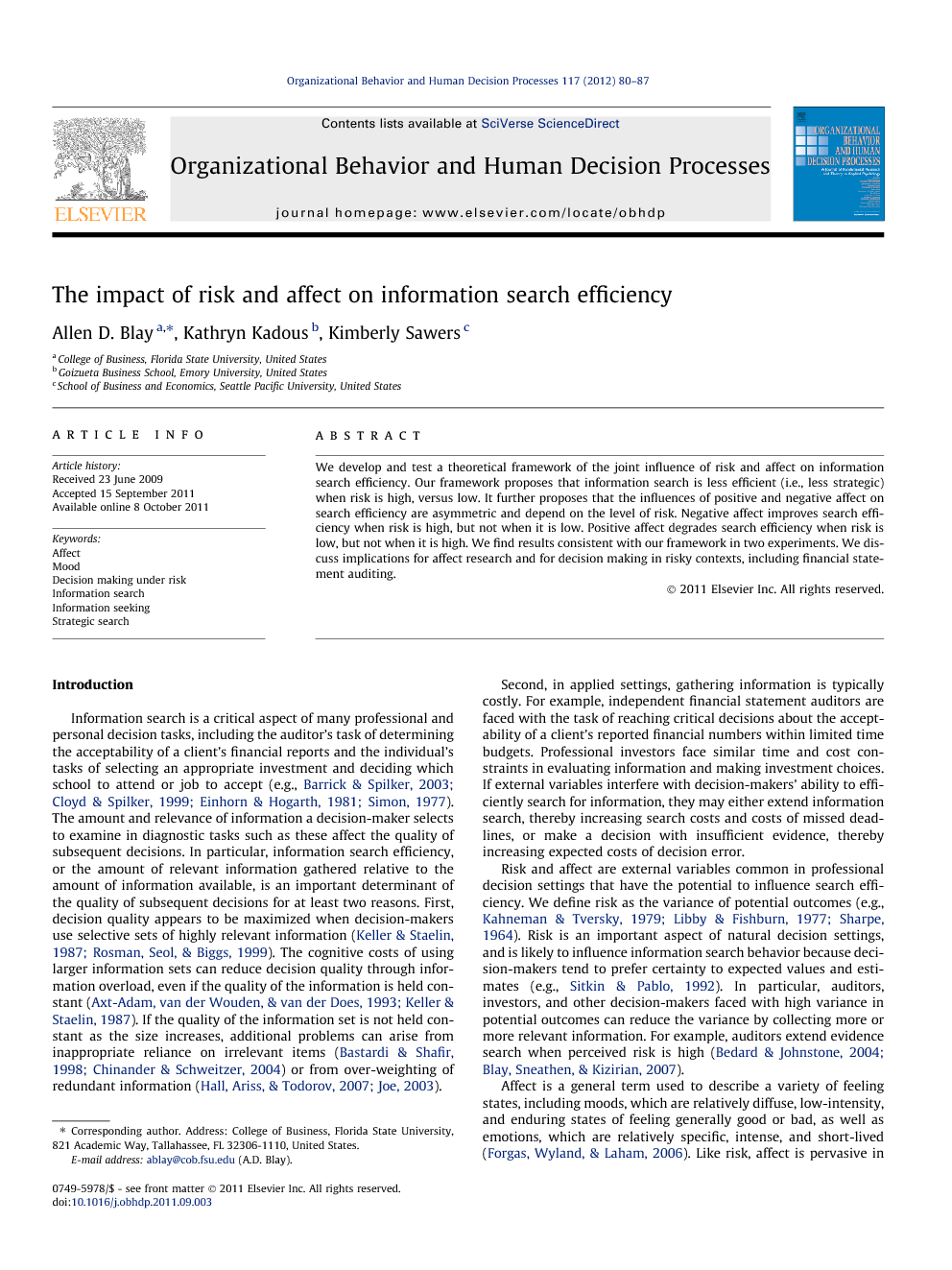 Information search is a critical aspect of many professional and personal decision tasks, including the auditor’s task of determining the acceptability of a client’s financial reports and the individual’s tasks of selecting an appropriate investment and deciding which school to attend or job to accept (e.g., Barrick and Spilker, 2003, Cloyd and Spilker, 1999, Einhorn and Hogarth, 1981 and Simon, 1977). The amount and relevance of information a decision-maker selects to examine in diagnostic tasks such as these affect the quality of subsequent decisions. In particular, information search efficiency, or the amount of relevant information gathered relative to the amount of information available, is an important determinant of the quality of subsequent decisions for at least two reasons. First, decision quality appears to be maximized when decision-makers use selective sets of highly relevant information (Keller and Staelin, 1987 and Rosman et al., 1999). The cognitive costs of using larger information sets can reduce decision quality through information overload, even if the quality of the information is held constant (Axt-Adam et al., 1993 and Keller and Staelin, 1987). If the quality of the information set is not held constant as the size increases, additional problems can arise from inappropriate reliance on irrelevant items (Bastardi and Shafir, 1998 and Chinander and Schweitzer, 2004) or from over-weighting of redundant information (Hall et al., 2007 and Joe, 2003). Second, in applied settings, gathering information is typically costly. For example, independent financial statement auditors are faced with the task of reaching critical decisions about the acceptability of a client’s reported financial numbers within limited time budgets. Professional investors face similar time and cost constraints in evaluating information and making investment choices. If external variables interfere with decision-makers’ ability to efficiently search for information, they may either extend information search, thereby increasing search costs and costs of missed deadlines, or make a decision with insufficient evidence, thereby increasing expected costs of decision error. Risk and affect are external variables common in professional decision settings that have the potential to influence search efficiency. We define risk as the variance of potential outcomes (e.g., Kahneman and Tversky, 1979, Libby and Fishburn, 1977 and Sharpe, 1964). Risk is an important aspect of natural decision settings, and is likely to influence information search behavior because decision-makers tend to prefer certainty to expected values and estimates (e.g., Sitkin & Pablo, 1992). In particular, auditors, investors, and other decision-makers faced with high variance in potential outcomes can reduce the variance by collecting more or more relevant information. For example, auditors extend evidence search when perceived risk is high (Bedard and Johnstone, 2004 and Blay et al., 2007). Affect is a general term used to describe a variety of feeling states, including moods, which are relatively diffuse, low-intensity, and enduring states of feeling generally good or bad, as well as emotions, which are relatively specific, intense, and short-lived (Forgas, Wyland, & Laham, 2006). Like risk, affect is pervasive in natural decision settings. Moreover, affect influences information processing in a variety of ways. Most research in this area focuses on the impact of ambient mood, as opposed to emotion (Forgas et al., 2006). Negative affect has been shown to focus information search (Fiedler et al., 1986, Isen, 1984, Keinan, 1987, Lewinsohn and Mano, 1993 and Mano, 1992). On the other hand, studies of the influence of positive affect on information processing tasks indicate that positive affect may reduce focus of attention (George & Brief, 1996) and increase risk aversion (Mittal & Ross, 1998), which would lead to less efficient information search (Mittal & Ross, 1998). We develop a theoretical framework that predicts when and how the increased focus from negative affect and the reduced focus from positive affect will moderate the effects of risk on the efficiency of information search. We conduct two experiments using tasks that are similar to an auditor’s verification task to test our predictions. We manipulate ambient affect and risk in both experiments. Information is costly.