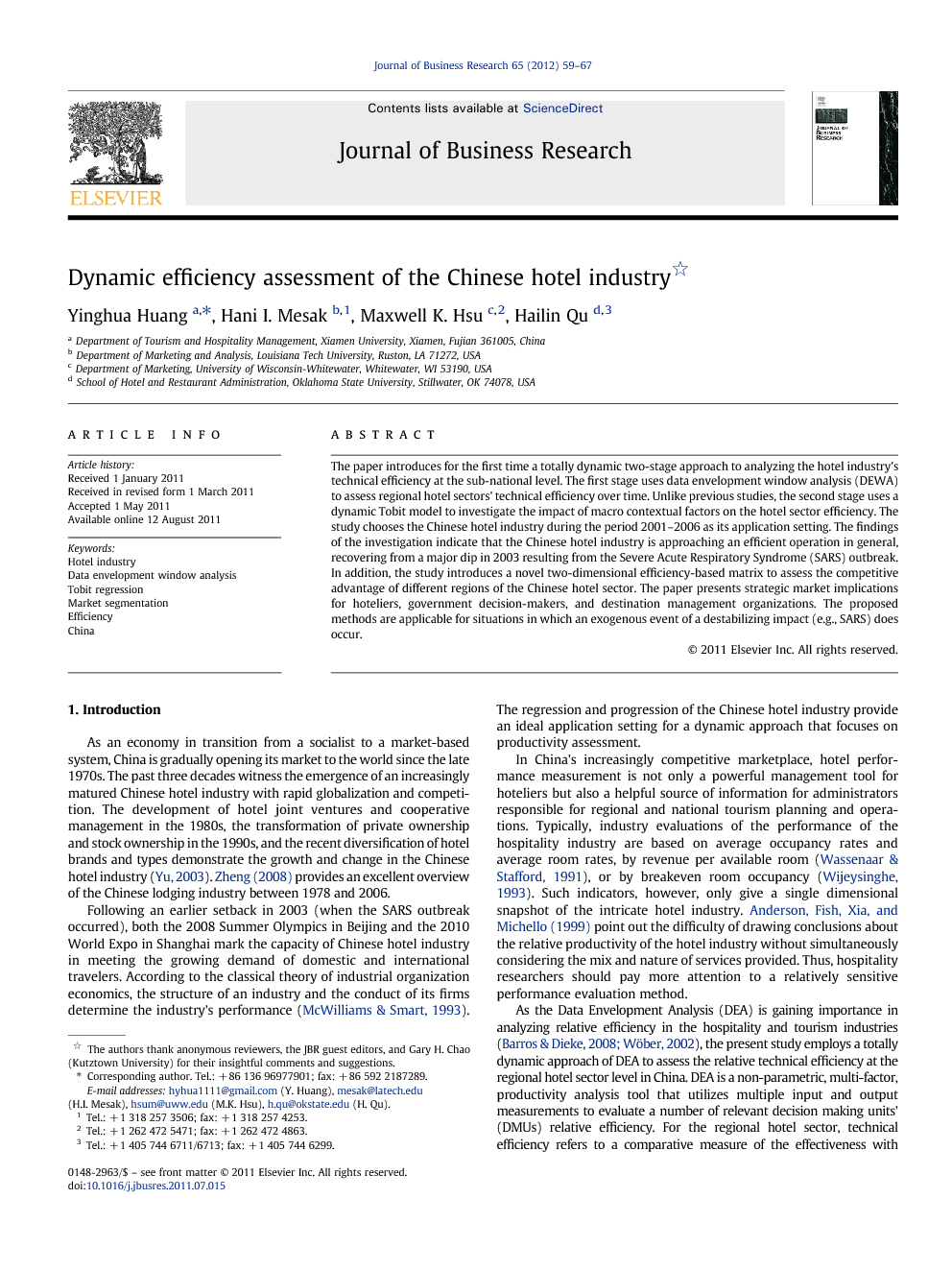 The paper introduces for the first time a totally dynamic two-stage approach to analyzing the hotel industry's technical efficiency at the sub-national level. The first stage uses data envelopment window analysis (DEWA) to assess regional hotel sectors' technical efficiency over time. Unlike previous studies, the second stage uses a dynamic Tobit model to investigate the impact of macro contextual factors on the hotel sector efficiency. The study chooses the Chinese hotel industry during the period 2001–2006 as its application setting. The findings of the investigation indicate that the Chinese hotel industry is approaching an efficient operation in general, recovering from a major dip in 2003 resulting from the Severe Acute Respiratory Syndrome (SARS) outbreak. In addition, the study introduces a novel two-dimensional efficiency-based matrix to assess the competitive advantage of different regions of the Chinese hotel sector. The paper presents strategic market implications for hoteliers, government decision-makers, and destination management organizations. The proposed methods are applicable for situations in which an exogenous event of a destabilizing impact (e.g., SARS) does occur.

As an economy in transition from a socialist to a market-based system, China is gradually opening its market to the world since the late 1970s. The past three decades witness the emergence of an increasingly matured Chinese hotel industry with rapid globalization and competition. The development of hotel joint ventures and cooperative management in the 1980s, the transformation of private ownership and stock ownership in the 1990s, and the recent diversification of hotel brands and types demonstrate the growth and change in the Chinese hotel industry (Yu, 2003). Zheng (2008) provides an excellent overview of the Chinese lodging industry between 1978 and 2006. Following an earlier setback in 2003 (when the SARS outbreak occurred), both the 2008 Summer Olympics in Beijing and the 2010 World Expo in Shanghai mark the capacity of Chinese hotel industry in meeting the growing demand of domestic and international travelers. According to the classical theory of industrial organization economics, the structure of an industry and the conduct of its firms determine the industry's performance (McWilliams & Smart, 1993). The regression and progression of the Chinese hotel industry provide an ideal application setting for a dynamic approach that focuses on productivity assessment. In China's increasingly competitive marketplace, hotel performance measurement is not only a powerful management tool for hoteliers but also a helpful source of information for administrators responsible for regional and national tourism planning and operations. Typically, industry evaluations of the performance of the hospitality industry are based on average occupancy rates and average room rates, by revenue per available room (Wassenaar & Stafford, 1991), or by breakeven room occupancy (Wijeysinghe, 1993). Such indicators, however, only give a single dimensional snapshot of the intricate hotel industry. Anderson, Fish, Xia, and Michello (1999) point out the difficulty of drawing conclusions about the relative productivity of the hotel industry without simultaneously considering the mix and nature of services provided. Thus, hospitality researchers should pay more attention to a relatively sensitive performance evaluation method. As the Data Envelopment Analysis (DEA) is gaining importance in analyzing relative efficiency in the hospitality and tourism industries (Barros and Dieke, 2008 and Wöber, 2002), the present study employs a totally dynamic approach of DEA to assess the relative technical efficiency at the regional hotel sector level in China. DEA is a non-parametric, multi-factor, productivity analysis tool that utilizes multiple input and output measurements to evaluate a number of relevant decision making units' (DMUs) relative efficiency. For the regional hotel sector, technical efficiency refers to a comparative measure of the effectiveness with which evaluators use a given set of inputs, such as labor and capital, to produce a targeted set of outputs, such as revenue and room occupancy. When explicitly taking into account the mix of service outputs produced, DEA is best suited to the comparison or benchmarking of a number of similar operational units (Donthu, Hershbergerb, & Osmonbekove, 2005). Despite a wide variety of DEA applications existing in various contexts such as regional development (Dinc, Haynes, & Tarimcilar, 2003), the banking industry (Luo, 2003 and Ward, 2009), and the higher education industry (Hsu, Chao, & James, 2009), Wöber (2006) conducts a comprehensive literature review related to the application of DEA technique in the tourism and hospitality fields, and he concludes that only a few recent studies start to raise attention among tourism researchers (Anderson et al., 2000 and Chiang et al., 2004). Recently, Chen (2009) also recognizes that the performance evaluation factors in the hospitality industry are multi-dimensional in nature and can hardly be aggregated using price or cost figures, and he acknowledges the usefulness of the DEA technique in the hospitality industry. Chen (2009) proposes a modified DEA model to measure the performance of a Taiwanese hotel chain. Similarly, Botti, Briec, and Cliquet (2009) apply the DEA method to examine French hotel chains, and they conclude that no specific organization form (e.g., plural forms versus franchise and company-owned systems) is more efficient than another. Motivation for the present study comes from the fact that the majority of DEA studies in the hospitality industry are static in nature, based mainly on cross-sectional data at the individual level of hotel entities. The present study assesses the hotel industry at the aggregate level of the regional hotel sector coupled with a dynamic analysis of DEA, monitoring technical efficiency and stability behavior over time. The study also identifies the critical antecedents of technical efficiency. Previous research focuses on the micro contextual factors (Hwang and Chang, 2003 and Yang and Lu, 2006), however, the influence of macro socio-economic factors needs further consideration. The present study partially fills the gap by focusing attention on the antecedents of technical efficiency at the regional hotel sector level in China. The purposes of the present study are threefold: to explore the dynamic technical efficiency of the Chinese hotel industry at the sub-national level; to provide a strategic framework for classifying regional hotel sectors that would be instrumental in the assessment of their competitive (dis)advantage; and to examine the impact of socio-economic variables on technical efficiency scores of the Chinese hotel industry. The current study offers a unique methodological contribution to the tourism literature. Specifically, the study employs a data envelopment window analysis (DEWA) in conjunction with a dynamic Tobit model (unlike previous studies that use exclusively a static Tobit model) to examine antecedents of DMUs’ relative efficiency over time using the Chinese hotel sector at its aggregate regional level as the application setting. Based on the obtained relative efficiency measures together with their fluctuations over time, the paper extends the DEA application within the literature by introducing a novel two-dimensional efficiency-based matrix to assess the competitive advantage of different regions of the Chinese hotel sector. The designated matrix serves not only as a tool for market segmentation, but also as a thoughtful basis for strategic decision-making and performance management that would be of help to government decision-makers, hoteliers/investors, and destination management organizations (DMOs). The methods of analysis mentioned above appear appropriate as the studied period (i.e., 2001–2006) includes an exogenous event of a destabilizing impact (i.e., SARS in 2003).

The current study presents findings from a dynamic evaluation of technical efficiency in the Chinese hotel industry during the period of 2001–2006. The findings allow the investigation of the antecedents of technical efficiency at the sub-national level. As such, the present study makes two major contributions. First, the study employs a data envelopment window analysis (DEWA) in conjunction with a dynamic Tobit regression model (unlike previous tourism and hospitality studies that exclusively use a static Tobit model) to examine the impacts of macro contextual factors on hotel sectors' technical efficiency over time. While previous research addresses the impacts of micro contextual factors (e.g., hotel size) on hotels' relative efficiency levels, this study extends the scope of efficiency antecedents to macro socio-economic factors at the sub-national level. Second, the present study introduces a novel two-dimensional efficiency-based matrix to assess the competitive advantage of different regions of the Chinese hotel sector. Strategic market implications for hoteliers, government decision-makers, and destination management organizations (DMOs) are presented. As a result, the findings enhance the understanding of hotel efficiency evaluation in a dynamic setting. The study reveals an overall low efficiency measure during the SARS outbreak in 2003 as shown in Fig. 1, and the dynamic Tobit regression findings in Table 5 confirm this result. Overall, the result of an average aggregate technical efficiency score of .85 indicates that the Chinese hotel industry is approaching a technically efficient operation. The research detects a statistically significant and negative correlation between average efficiency scores and their standard deviations, suggesting that DMUs with relatively low average efficiency are most likely to have high dispersion. Based on the level of technical efficiency observed over time, the study classifies hotel sectors in the 31 regions into four categories. Regarding the two-dimensional efficiency-based matrix in Table 4, government decision-makers and hoteliers can gain insight into the benchmarked best practice (i.e., those DMUs in the zone of high efficiency and high stability) in the Chinese hotel industry. Nevertheless, researchers should interpret the empirical findings with caution as the DEWA outcome could be different when other inputs and outputs are employed in the analysis. The second part of the study explores macro contextual factors driving technical efficiency. The positive effects of historical technical efficiency (HTE), international tourism attractiveness (ITA), education level of employees (EDU), and payment level of employees (EARN) on technical efficiency are in conformity with the standard economic view that market share and human incentives are keys to economic development and greater technical efficiency. However, whether a positive effect of trade openness in terms of technology diffusion and resources allocation may be offset to the full extent by a negative effect of overcapacity of hotels in China's highly competitive hospitality industry requires further examination in future research. In addition to the contextual factors examined in the present study, many other factors that may influence the technical efficiency of the Chinese hotel industry exist. Possibly influential factors include the agglomeration effects of industrial clusters (Barros & Dieke, 2008), and scale and scope economies (Chung & Kalnins, 2001) among others, which future studies are expected to investigate. Given the underlying differences between China and western countries, conducting a cross-national study, comparing the efficiency of the hotel sector industry between China and a sizable western country like the United States would be of value. Furthermore, researchers may conduct further study in a broader global setting (e.g., using hotel industry data from both developed and developing nations) to shed light on the operational efficiency of the global hotel industry. Effective practice of benchmarking would be an aid to better decision making as part of the overall global investment process.