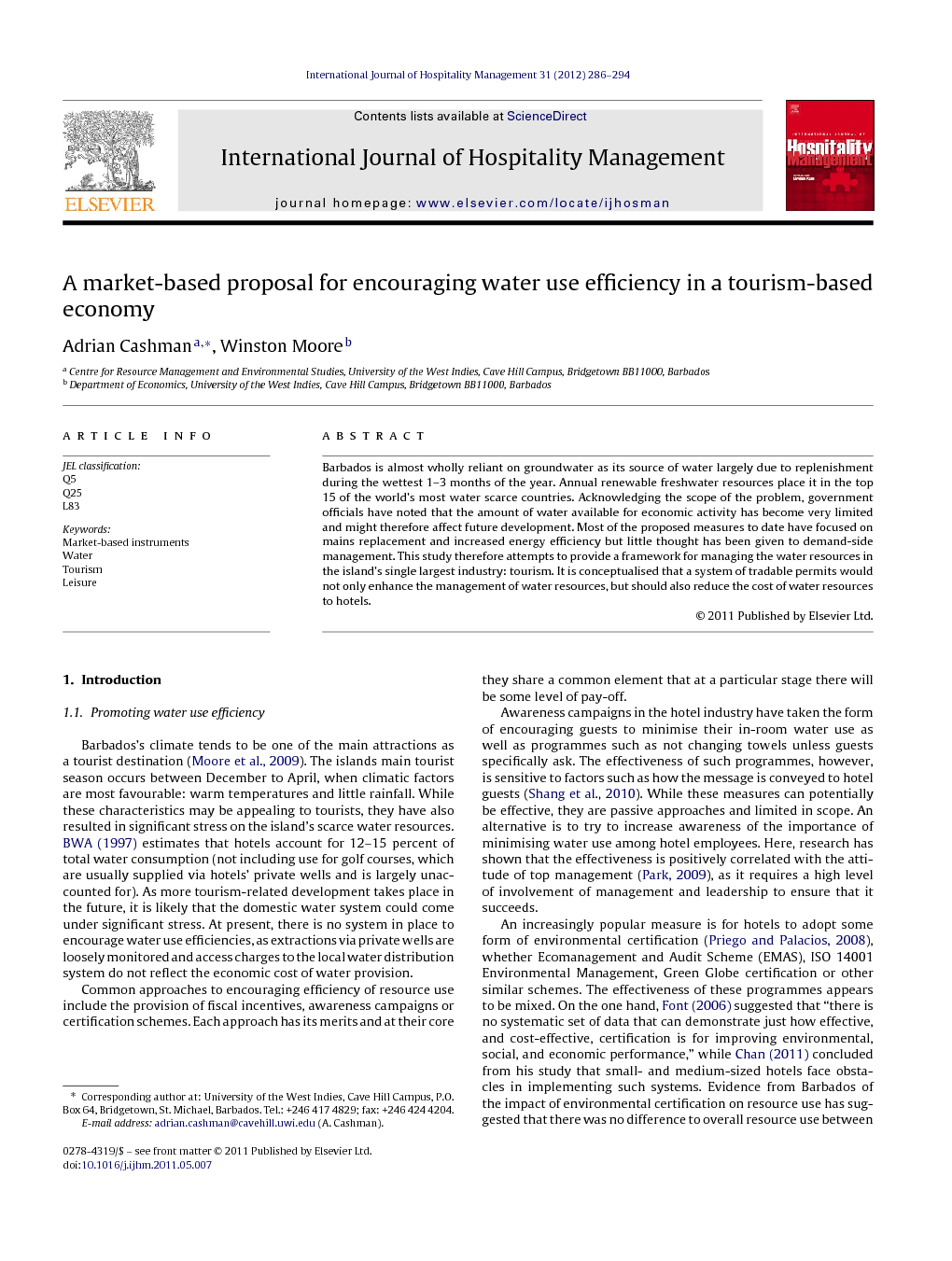 Barbados is almost wholly reliant on groundwater as its source of water largely due to replenishment during the wettest 1–3 months of the year. Annual renewable freshwater resources place it in the top 15 of the world's most water scarce countries. Acknowledging the scope of the problem, government officials have noted that the amount of water available for economic activity has become very limited and might therefore affect future development. Most of the proposed measures to date have focused on mains replacement and increased energy efficiency but little thought has been given to demand-side management. This study therefore attempts to provide a framework for managing the water resources in the island's single largest industry: tourism. It is conceptualised that a system of tradable permits would not only enhance the management of water resources, but should also reduce the cost of water resources to hotels.

Barbados is one of the most water-scarce countries in the world. Despite this, there is no system in place to encourage water-use efficiency either among residential or industrial users. Given that the island depends on tourism to drive the economy, water resources (or the lack thereof) could significantly hamper future growth prospects. This paper therefore puts forward the idea of the use of tradable permits in order to manage and encourage water use efficiency in the hotel industry. The study concludes that the basic conditions do exist for the introduction of a proposed water permit and trading scheme for the hotel industry of Barbados and it outlines what the main features of such a scheme might consist of. A key factor in the introduction of such a scheme would be the setting of a realistic cap on water consumption at individual establishments, by introducing an efficiency measure requirement that creates an incentive (for some) to cut water consumption and to trade the surplus. We propose that the initial allocation be based on a combination of historic water use adjusted by taking into account desired efficiency gains and the benchmarking of consumption. The results of the simulated trading in water permits presented indicate that, depending on the assumed elasticity of demand for water within hotels, there would be a significant amount of trading. The price of tradable permits varies from US$1.64 to US$8.55/m3 again depending on assumptions, with the expected range being between US$1.34 to uS$3.44/m3, which is not too dissimilar from the commercial rate of US$2.33/m3. We conclude that such a scheme could increase the profitability of the hotel industry as a whole. While such a scheme would, in theory, be both feasible and beneficial, there are a number of practical considerations that would need to be addressed. These fall into three categories: (1) technical; (2) administrative; and, (3) social. Technical considerations include the need to ensure that the meters at all hotel properties are reliable, functioning correctly and accurately, that protocols are in place to ensure regular calibration of meters and that replacement meters are on hand if the need arises. Complementing this would be a need to ensure that should any problems arise with the meters that they are dealt with expeditiously. Confidence in the quality of the data produced would be a critical consideration. This would require investment on the part of the BWA but could also be outsourced and funded out of the trades. In order to determine the setting and allocation of consumption permits it will be necessary to benchmark consumption across different types of hotels and to secure consensus for the benchmarking. There are already a number of benchmarking approaches that have been developed (Charara et al., 2010) which could be adapted to suit local circumstances. Administratively the biggest issue to be resolved would be the arrangements for the trading of the permits. We suggest either through brokers and the stock market or through the EPD. If trades were to be conducted through the EPD this would require capacity building as well as organisational change. If through traders then the necessary capacity building should be less. But this should not be separated from provision to impose penalties for non-compliance and with this in mind it might be preferable for trades and enforcement to be exercised through the same body, which would suggest the EPD acting as the clearing house. The social barriers are perhaps the most problematic as evidenced by difficulties in setting up other permit trading schemes (Bailey et al., 2010 and Sovacool, 2011) and the compromises it usually entails to get agreement. It is likely that such a scheme would not (initially) be welcomed by the hotel industry nor by the BWA. On the one hand, the BWA would have to be persuaded that there would be benefits for it arising from such a scheme and on the other hotels would have to be convinced that the administrative burden would not be heavy and that it would not adversely impact on their profitability. The concerns of the BWA should be the easier to handle. Firstly because of the arguments already advanced and secondly, because promoting resource conservation is in the national interest and they are a national body. The concerns of hotels present more of a challenge and would have to be the subject of persuasion and engagement. With backing, recognition of the support the industry receives from government and careful engagement it should be possible to address their concerns. In the light of the above we believe that the introduction of a water permit-trading scheme for the hotel industry should be given serious consideration by policy-makers. It has the potential to reduce the demand on scarce water resources, increase water productivity and at the same time enhance the quality of guest experience within the hotels without adversely impacting on the profitability of the sector.