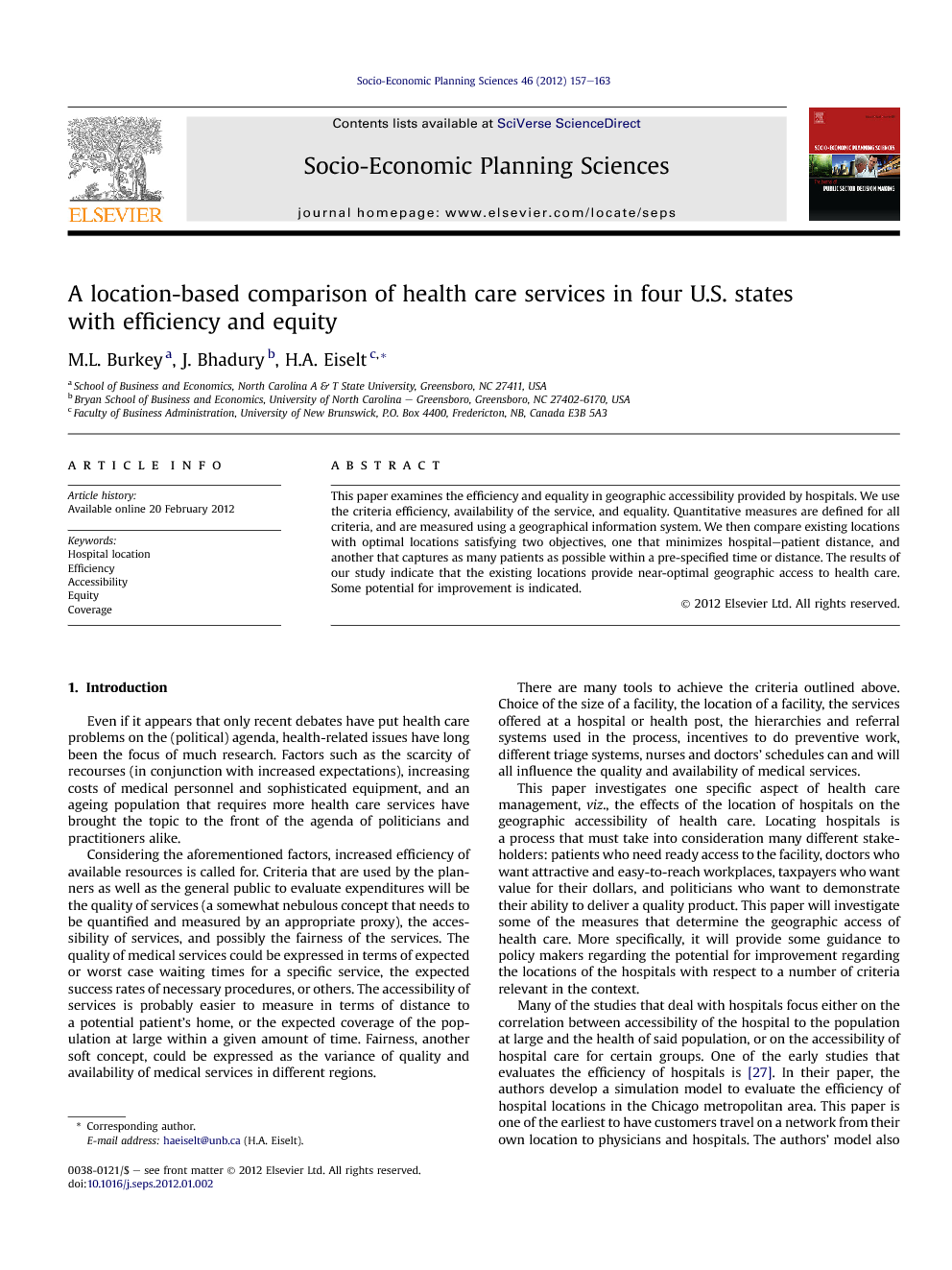 This paper examines the efficiency and equality in geographic accessibility provided by hospitals. We use the criteria efficiency, availability of the service, and equality. Quantitative measures are defined for all criteria, and are measured using a geographical information system. We then compare existing locations with optimal locations satisfying two objectives, one that minimizes hospital–patient distance, and another that captures as many patients as possible within a pre-specified time or distance. The results of our study indicate that the existing locations provide near-optimal geographic access to health care. Some potential for improvement is indicated.

Even if it appears that only recent debates have put health care problems on the (political) agenda, health-related issues have long been the focus of much research. Factors such as the scarcity of recourses (in conjunction with increased expectations), increasing costs of medical personnel and sophisticated equipment, and an ageing population that requires more health care services have brought the topic to the front of the agenda of politicians and practitioners alike. Considering the aforementioned factors, increased efficiency of available resources is called for. Criteria that are used by the planners as well as the general public to evaluate expenditures will be the quality of services (a somewhat nebulous concept that needs to be quantified and measured by an appropriate proxy), the accessibility of services, and possibly the fairness of the services. The quality of medical services could be expressed in terms of expected or worst case waiting times for a specific service, the expected success rates of necessary procedures, or others. The accessibility of services is probably easier to measure in terms of distance to a potential patient’s home, or the expected coverage of the population at large within a given amount of time. Fairness, another soft concept, could be expressed as the variance of quality and availability of medical services in different regions. There are many tools to achieve the criteria outlined above. Choice of the size of a facility, the location of a facility, the services offered at a hospital or health post, the hierarchies and referral systems used in the process, incentives to do preventive work, different triage systems, nurses and doctors’ schedules can and will all influence the quality and availability of medical services. This paper investigates one specific aspect of health care management, viz., the effects of the location of hospitals on the geographic accessibility of health care. Locating hospitals is a process that must take into consideration many different stakeholders: patients who need ready access to the facility, doctors who want attractive and easy-to-reach workplaces, taxpayers who want value for their dollars, and politicians who want to demonstrate their ability to deliver a quality product. This paper will investigate some of the measures that determine the geographic access of health care. More specifically, it will provide some guidance to policy makers regarding the potential for improvement regarding the locations of the hospitals with respect to a number of criteria relevant in the context. Many of the studies that deal with hospitals focus either on the correlation between accessibility of the hospital to the population at large and the health of said population, or on the accessibility of hospital care for certain groups. One of the early studies that evaluates the efficiency of hospitals is [27]. In their paper, the authors develop a simulation model to evaluate the efficiency of hospital locations in the Chicago metropolitan area. This paper is one of the earliest to have customers travel on a network from their own location to physicians and hospitals. The authors’ model also includes patients’ religious and racial choices for the facility they patronize. Because of the technology at the time, the paper’s modeling of the network and patient location is somewhat coarse, but they highlight the idea that going to the nearest facility is not always optimal or even feasible due to the type of services needed or racial or religious considerations. There is a significant number of studies concerning the accessibility of health care facilities. Newhouse et al. [33] measured accessibility as the number of specialists per capita. Rosenthal et al. [35] modeled customer and physicians’ locations on a zip code level and modeled accessibility as the number of physicians per capita and the average distance between patients and physicians for rural and urban areas. Using more detail, Love and Lindquist [23] assessed customer and hospital locations at the census block group level for the State of Illinois. Hare and Barcus [19] followed a different line of research. Their accessibility measure is ultimately the expected time between a customer (approximated by zip code) and the nearest hospital. The road distances and speeds are then used to estimate the travel time. The authors’ main results are the correlation with areas of low accessibility of hospitals and (rural) areas of poverty. Concerning the correlation between accessibility and preventative care, Currie and Reagan [8] find that among inner-city children, each additional mile to the closest hospital (which is used by many in this population group not for emergencies but for routine medical checkups) corresponds to a 3% decrease in the probability that a child has had a medical checkup.1 Goodman et al. [40] achieved a similar result in their study. In particular, they determined that patient–hospital distance is inversely correlated to the likelihood that patients will seek care in discretionary services. Similarly, Nattinger et al.’s [31] study revealed that longer patient–hospital distances correlated with lower use of follow-up radiation treatment after a lumpectomy. Finally, Buchmueller et al. [4] used a quasi-experimental approach, using actual hospital closures’ affects on accessibility on patient outcomes. They find that patient–hospital distances positively correlate with deaths due to heart attacks and accidental injuries. After briefly discussing the measurement of average accessibility and equality of accessibility in the next section, we discuss how optimization models may be used to determine a theoretical maximum on the amount of improvement possible in reducing the average or providing a minimum access level while keeping the number of facilities the same. Section 3 applies these criteria to four states in the southeastern US, finding that improving the average (efficiency) usually also improves the lot of those with the worst access. However, if the goal is solely to guarantee a minimum level of service, we see equality of access improve at the expense of efficiency. Section 4 summarizes our findings and suggests future extensions of this research.

In this paper we have studied geographic access to hospitals, which is one of many facets of overall accessibility to health care. We calculated travel distances and times at a very fine level using census block groups and road networks for four contiguous U.S. States. We found that measures of equality are very sensitive to whether times or distances are used because of the higher speeds in rural areas relative to urban areas. We argued that travel times are a more justifiable measure of access than distance. Remarkably, we found that the existing hospital locations in these states are very efficient relative to the optimized set of locations, with three of the four states providing average travel times within 3–6% of the optimal value. Similarly, the existing locations provide a fairly good level of service availability, with 91–94% of the populations in these states having access to a hospital within a 30-minute drive. Stated differently, even if policy makers could go back in time to form a bureaucracy to screen hospital locations to ensure that they were located “optimally,” or invest substantial funds to force/encourage improvements in either efficiency or availability, little improvement could have been made over the pattern that has emerged naturally. The sole exception to this was the state of Tennessee. An additional corollary of the results presented in this study is that it determines the theoretical limits of improvement in either efficiency (mean time within which a patient can reach the nearest hospital) or service availability (proportion of the population that can reach a hospital within 30 minutes), given the actual locations of the hospitals and the best possible solutions (assuming that all hospitals could be relocated to their optimal sites). As mentioned before, we found that the existing locations provide service levels very close to those that could be attained by using optimal locations. This information will be very helpful to policy makers in that it provides them with an indication of what the potentials for improvements are and how much access and efficiency can be enhanced. Finally, the study also found that improving efficiency usually had an improvement in availability as a byproduct. However, the opposite was found when the goal was improving availability: an increase in availability served as an equalizing influence, reducing travel times for the worst served, but increasing times for the majority, which decreased efficiency. Thus, we observe the tradeoffs between equity and efficiency seen so often in the economics literature played out in a spatial accessibility analysis. Such tradeoffs will be of particular interest in prescriptive scenarios, i.e., those in which decision makers are actively searching for locations of new or facilities or are seeking replacements of existing facilities. Future research could focus on a variety of tools to increase efficiency of health care services. Among them are hierarchical systems and the required referral systems (pioneered in location theory by Hodgson [20]). Another important issue deals with congestion [2]. However, many such models are probabilistic, which will any larger instance of these models impossible to solve exactly. Among of the exceptions are deterministic models with backup coverage, see, e.g., [10].