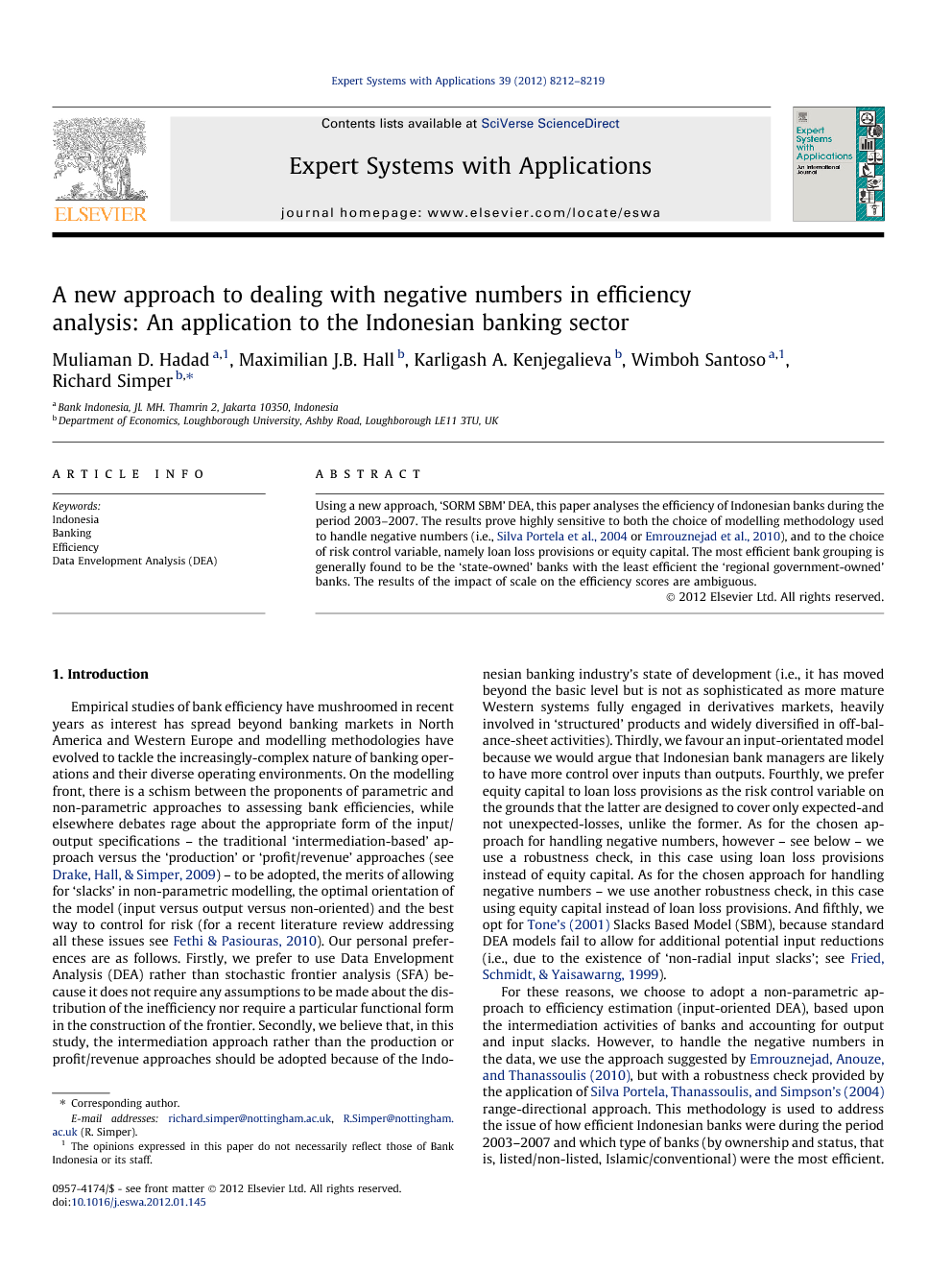 Using a new approach, ‘SORM SBM’ DEA, this paper analyses the efficiency of Indonesian banks during the period 2003–2007. The results prove highly sensitive to both the choice of modelling methodology used to handle negative numbers (i.e., Silva Portela et al., 2004 or Emrouznejad et al., 2010), and to the choice of risk control variable, namely loan loss provisions or equity capital. The most efficient bank grouping is generally found to be the ‘state-owned’ banks with the least efficient the ‘regional government-owned’ banks. The results of the impact of scale on the efficiency scores are ambiguous.

Empirical studies of bank efficiency have mushroomed in recent years as interest has spread beyond banking markets in North America and Western Europe and modelling methodologies have evolved to tackle the increasingly-complex nature of banking operations and their diverse operating environments. On the modelling front, there is a schism between the proponents of parametric and non-parametric approaches to assessing bank efficiencies, while elsewhere debates rage about the appropriate form of the input/output specifications – the traditional ‘intermediation-based’ approach versus the ‘production’ or ‘profit/revenue’ approaches (see Drake, Hall, & Simper, 2009) – to be adopted, the merits of allowing for ‘slacks’ in non-parametric modelling, the optimal orientation of the model (input versus output versus non-oriented) and the best way to control for risk (for a recent literature review addressing all these issues see Fethi & Pasiouras, 2010). Our personal preferences are as follows. Firstly, we prefer to use Data Envelopment Analysis (DEA) rather than stochastic frontier analysis (SFA) because it does not require any assumptions to be made about the distribution of the inefficiency nor require a particular functional form in the construction of the frontier. Secondly, we believe that, in this study, the intermediation approach rather than the production or profit/revenue approaches should be adopted because of the Indonesian banking industry’s state of development (i.e., it has moved beyond the basic level but is not as sophisticated as more mature Western systems fully engaged in derivatives markets, heavily involved in ‘structured’ products and widely diversified in off-balance-sheet activities). Thirdly, we favour an input-orientated model because we would argue that Indonesian bank managers are likely to have more control over inputs than outputs. Fourthly, we prefer equity capital to loan loss provisions as the risk control variable on the grounds that the latter are designed to cover only expected-and not unexpected-losses, unlike the former. As for the chosen approach for handling negative numbers, however – see below – we use a robustness check, in this case using loan loss provisions instead of equity capital. As for the chosen approach for handling negative numbers – we use another robustness check, in this case using equity capital instead of loan loss provisions. And fifthly, we opt for Tone’s (2001) Slacks Based Model (SBM), because standard DEA models fail to allow for additional potential input reductions (i.e., due to the existence of ‘non-radial input slacks’; see Fried, Schmidt, & Yaisawarng, 1999). For these reasons, we choose to adopt a non-parametric approach to efficiency estimation (input-oriented DEA), based upon the intermediation activities of banks and accounting for output and input slacks. However, to handle the negative numbers in the data, we use the approach suggested by Emrouznejad, Anouze, and Thanassoulis (2010), but with a robustness check provided by the application of Silva Portela, Thanassoulis, and Simpson’s (2004) range-directional approach. This methodology is used to address the issue of how efficient Indonesian banks were during the period 2003–2007 and which type of banks (by ownership and status, that is, listed/non-listed, Islamic/conventional) were the most efficient. Furthermore, the differences in efficiencies between different ownership, status and asset-sized groups, were then formally tested using the bootstrapping procedures of Simar and Wilson (2007). This paper represents one of the first attempts to analyse Indonesian banks on a stand-alone basis. The analysis of banking markets in Indonesia is long overdue given the country’s growing importance within the resurgent region of South East Asia and its significance as a major ASEAN nation. Moreover, it is one of only a few studies to analyse bank efficiency in this region since the end of the Asian financial crisis (AFC). Accordingly, it represents a timely and warranted addition to the extant empirical literature on banking efficiency, especially for the South East Asian region. The paper is structured as follows. In Section 2, we briefly set out the structure of the Indonesian banking system, highlighting the respective asset shares of the different groups. In Section 3 we present the modelling methodology, the nature of the dataset used, and the input/output variables deployed in the intermediation-based efficiency analysis. In Section 4 we set out our results, and explain their policy implications. And, in Section 5, we summarise and conclude.

Using a unique dataset provided by Bank Indonesia and adopting input-oriented SBM (Tone, 2001) and SORM (Emrouznejad et al., 2010) DEA intermediation-based approaches, we have estimated the average efficiencies of Indonesian banks during the 2003–2007 period, both overall and by ownership group, size and status. We also employed Silva Portela et al.’s (2004) range-directional (RD) model as a robustness check. The stage one results demonstrate the following: (i) average bank efficiency within the industry during the analysed period lay between 58% and 63% for the SORM SBM model, and between 72% and 79% for the RD model, with the efficiency scores being higher, but only marginally, when equity capital is used as the risk control variable within the SORM SBM model but marginally lower within the RD model; (ii) under the RD model, the most efficient group of banks was the ‘state-owned’ group, recording an average efficiency of over 90%; (iii) under the SORM SBM model, the most efficient group of banks when LLP was used as the risk control variable was the ‘non-foreign exchange private banks’ group, with an average efficiency score of 79%, but when equity capital was used as the risk control variable, the ‘non-foreign exchange’ and ‘state-owned’ banks performed the best (74%); (iv) the ‘regional government-owned’ banks were shown to be the least efficient in both models, recording average efficiency levels of between 39% and 66%; (v) listed banks were shown to be more efficient (with average efficiency levels of around 80%) than the average bank under the RD model but not under the SORM SBM model; and (vi) despite their very different operational structure when compared with conventional banks, Islamic banks were shown to have enjoyed average levels of efficiency of between 45% and 61% under the SORM SBM model, and between 62% and 90% under the RD model. These results suggest that the estimated efficiency scores are very sensitive to the choice of methodology used for dealing with negative numbers (i.e., SORM SBM or RD), the latter delivering scores, on average, 14% higher than the former. They also suggest that group rankings are somewhat sensitive to the choice of risk control variable, although most models have the ‘state-owned’ banks amongst the most efficient, with all models showing the ‘regional government-owned’ banks as the least efficient. Formal statistical tests confirm that the results are, in fact, very sensitive to the choice of risk control variable under the RD model but less so under the SORM SBM model. The bootstrapping results largely confirm the group rankings derived in the first part of the analysis, as well as the relative performances of the ‘Islamic’ and ‘listed’ banks. Moreover, the results for the impact of scale are ambiguous, with the largest banks only emerging as the most efficient in the RD model. As for the main policy implications of our study, firstly, given that they have the third greatest share (around 10%) of assets and customer deposits yet are the most inefficient group, supervisory resources should be devoted to trying to understand why the regional government-owned banks’ intermediation-based activities are so inefficient with a view to raising their performance to at least the industry average. Although, in all likelihood, the answer mainly lies in their continued susceptibility to ‘directed lending’ by their political masters (and hence subject to social policy/political requirements rather than to cost-minimisation considerations) there may be other factors at play. Their relatively – low loans to deposits ratios, for example, are a reflection of their cautious policy to lending because of the very short-term nature of their liabilities, predominately current accounts. Secondly, closer analysis of the operations of the state-owned banks might be undertaken with a view to eliciting “best industry practice” and disseminating such findings to the rest of the industry. [The ‘state-owned’ banks are likely to have benefitted from ‘cleansing’ of their balance sheets prior to privatisation to enhance the demand for their shares.] And, finally, close inspection of the relative efficiency rankings might also be used to inform the continuing debate on bank mergers by identifying those tie-ups which are likely to prove most beneficial, whether they arise as a result of private sector initiatives or from officially-sanctioned ‘assisted mergers’, a common feature of banking markets around the world as regulators seek to stabilise their financial systems in the wake of the sub-prime crisis and the global economic downturn. The empirical finding that large banks are significantly more efficient than their smaller counterparts in the RD model offers some support to Bank Indonesia’s efforts, to date, to force further consolidation in the Indonesian banking sector, although, of course, increased efficiency need not necessarily equate to increased stability, as evidenced by the liquidity crisis which faced the British bank Northern Rock in the Autumn of 2007 despite the bank possessing an industry-beating cost-to-income ratio (see House of Commons, 2008). The findings therefore suggest a future Indonesian bank efficiency research agenda embracing formal analysis of the potential gains to be made from further mergers in the banking industry. In addition, it would be informative to examine the impact of external and regulatory factors on the evolution of the Indonesian banking industry’s efficiency since before the AFC and to compare industry performance with that of other ASEAN banking systems. Our future efforts, accordingly, will be focused in these areas.