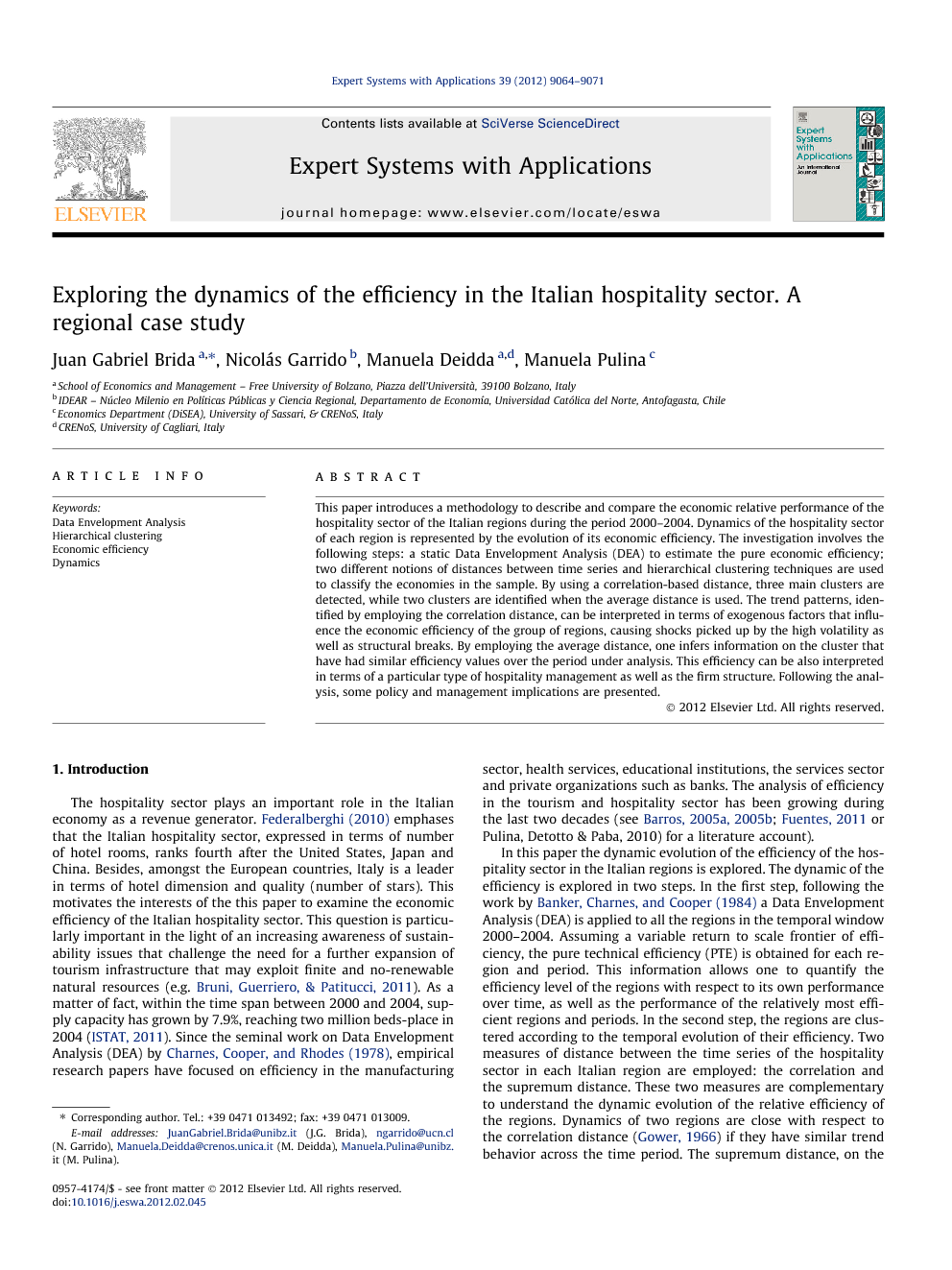 This paper introduces a methodology to describe and compare the economic relative performance of the hospitality sector of the Italian regions during the period 2000–2004. Dynamics of the hospitality sector of each region is represented by the evolution of its economic efficiency. The investigation involves the following steps: a static Data Envelopment Analysis (DEA) to estimate the pure economic efficiency; two different notions of distances between time series and hierarchical clustering techniques are used to classify the economies in the sample. By using a correlation-based distance, three main clusters are detected, while two clusters are identified when the average distance is used. The trend patterns, identified by employing the correlation distance, can be interpreted in terms of exogenous factors that influence the economic efficiency of the group of regions, causing shocks picked up by the high volatility as well as structural breaks. By employing the average distance, one infers information on the cluster that have had similar efficiency values over the period under analysis. This efficiency can be also interpreted in terms of a particular type of hospitality management as well as the firm structure. Following the analysis, some policy and management implications are presented.

In this paper, a methodology has been introduced to explore the dynamical behavior of the economic efficiency of the hospitality sector in the Italian regions, during the period 2000-2004. This tool allows one to construct clusters according to two measures of distance between the trajectory efficiency of the regions: the correlation and the average distance. The correlation distance clusters together regions where the time series of the measure of efficiency are correlated. The average distance clusters together regions having a similar level of efficiency during the whole period. All regions, except three outliers have been clustered in three groups according to the correlation distance. Then, the evolution of the average efficiency has been taken into consideration, in order to identify some common features which may have determined regions belonging to the same cluster to respond to shock in a similar way. Considering the evolution of the overnight of stays during the period of interest, as an indicator for external shocks, it has been noticed that regions belonging to Cluster C (i.e. Apulia, Trento, Veneto and Bozen) show an opposite pattern with respect to the evolution of such an economic indicator. It may be possible that the terroristic attack in 2001 have moved tourism flows away from central regions with large cities such as Florence and Rome, thus causing an opposite movement of the efficiency in the peripheral regions. On the one hand, when considering the average distance, regions are grouped into two clusters, with the majority of regions belonging to the first cluster. When looking at the evolution of the average efficiency over the period under consideration, the path of the efficiency of all the regions, but those belonging to Cluster 2, is rather smooth. On the other hand, Sicily and Aosta Valley, which belong to the second cluster, are characterized by a large decrease of the efficiency in the period taken into consideration. This may be due to the high seasonality of these regions, which may cause inefficiencies in the utilization of resources. Finally, all regions are segmented according to the fact that their belonging to the clusters identified with the correlation distance rather than the average distance. Regions which show a similar trend and dynamics share common features in terms of entrepreneurial structure (i.e. number of stars, beds, rooms) as well as for the seasonality. Structural factors rather than the mere geographical location of hotels indeed affects the evolution of hotel efficiency over time. The results obtained in this paper suggests future research into two lines. On the one hand, the exploration of the data in the Italian hospitality sector has indicated the possibility to explore new relationships between investments, labor, revenues and value added among the regions. On the other hand, new distances can be employed to extract different information from this empirical data and another data sources. In particular, if longer time series were available, the evolution of the clusters could be further investigated. (see Brida et al., 2010 and Brida et al., 2011). Limitation of the present research includes the relatively short time span of the data set and the use of aggregate data that may not be entirely represent tourism demand and supply.