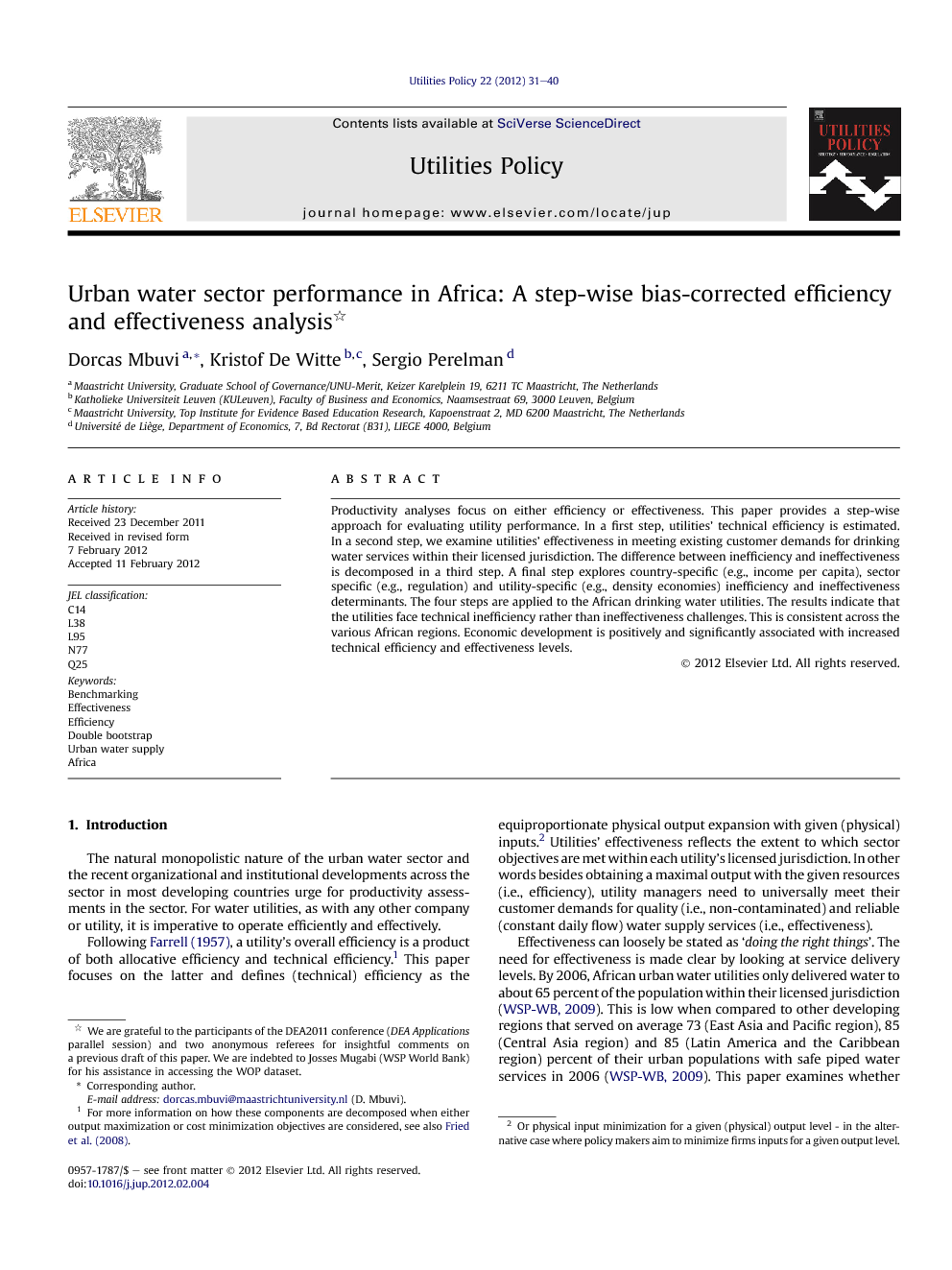 This paper explored the use of benchmarking techniques in facilitating informed policy decisions across the African urban water sector. Using the double bootstrap procedure in a step-wise model approach, technical efficiency scores were first estimated and compared across different model specifications. The first (basic) specification ignored output quality variables. The second and third specification took into account both service connectivity (in terms of active piped water connections) and service continuity factors (measured in daily hours of water supply). Second, utilities' effectiveness levels were explored and unbundled from inefficiency in a third step. In the latter step, we used the ratio of utilities’ effectiveness to technical efficiency to understand the key reasons behind utilities poor performance (due to either inefficiency or ineffectiveness) and the extent to which observed utilities utilize available resources to reach their effectiveness targets. We referred to this ratio as the ‘potential input capacity’ (PIC). PIC values of less than, more than or equal to one denote utilities’ resources deficiency, excess use of input resources (due to higher inefficiency than ineffectiveness problems) and, exact resource allocation. Finally, possible influences of country, sector and utility-specific environmental variables on utilities’ technical efficiency (and effectiveness) levels were explored. The results pointed out that most utilities faced more inefficiency than ineffectiveness problems (PIC values >1). Consequently, if the utilities would have been performing as efficiently as the best practice observations, they would achieve their effectiveness targets with fewer resources. To provide water supply services to all the population within their licensed jurisdiction and attain 100 percent effectiveness, these utilities would not need any additional resources. Across the African region, no major performance differences were observed. Utilities across the East, West and Southern African regions seemed less ineffective than technically inefficient. To fully penetrate their markets, these utilities would need to reduce their input use (as evident from their PIC values of more than one). Nonetheless, South African utilities are the most well performing (both effectively and efficiently) followed by (i.e., when both service connectivity and continuity variables are considered) the East African and the West African utilities. Only countries’ economic development (measured in terms of the gross domestic product per capita purchasing power parity) is positively and significantly linked to utilities technical efficiency and effectiveness. Network density correlates positively to utilities’ technical efficiency but negatively influences utilities’ effectiveness. This is, however, insignificant across the three model specifications. Independent regulation is positively found linked to utilities’ technical efficiency and effectiveness. Nevertheless, this is only significant when service connectivity variables are considered. Despite the fact that the paper been based on correlations and thus does not provide causal relationships, it offers some clear insights for policy. First, the paper confirms that efficiency and effectiveness are not a trade-off. Water utilities can improve their effectiveness by increasing their efficiency. To do so, they should learn from best practices. Second, utility regulators, managers and policy makers should carefully take into account both efficiency and effectiveness performance indicators. This paper provided one way of disentangling ineffectiveness from inefficiency. Lastly, national economic advancement matters for utilities’ efficiency and effectiveness improvement. International organizations such as the World Bank and the United Nations should thus foster the wealth of countries. This in turn will improve the efficiency and effectiveness of public service utilities. We see various avenues of further research. First, the availability of complete operational data (both quantity and cost data) would permit the extension of this study to explore other kinds of efficiency (including cost and allocative efficiencies) and effectiveness measures. Second, despite this first study, a better understanding of the complex relationship between efficiency and effectiveness is needed. Therefore, it would be insightful to apply the proposed step-wise model to other sectors and other continents. Third, the paper at hand provides some first steps in explaining the drivers of effectiveness. Further research is needed to explore the influence of quality indicators, political economy variables as well as management structures. A final promising avenue for further research consists of extending the cross-sectional setting to panel data. This should allow for controlling of country and utility fixed effects.