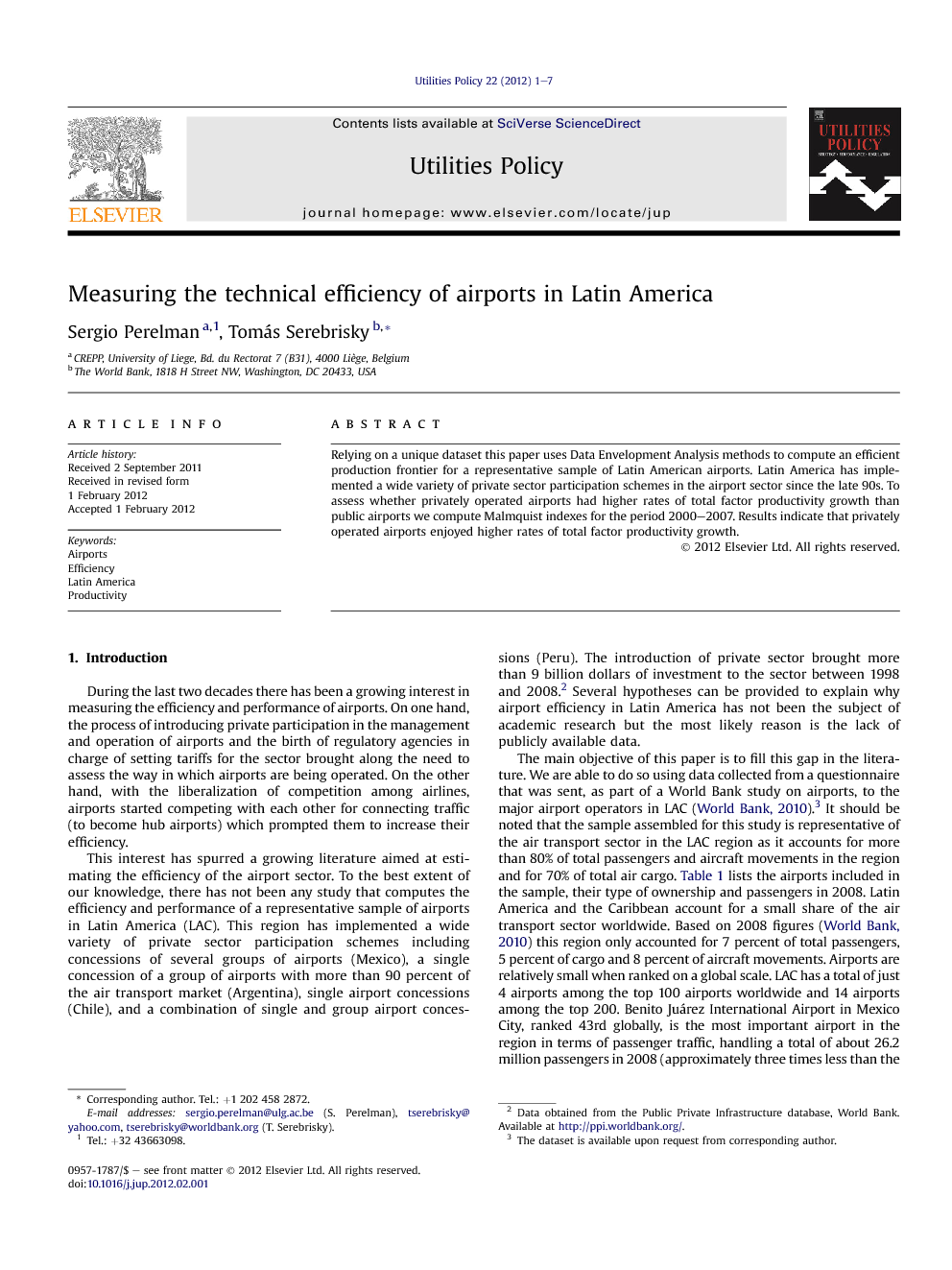 During the last two decades there has been a growing interest in measuring the efficiency and performance of airports. On one hand, the process of introducing private participation in the management and operation of airports and the birth of regulatory agencies in charge of setting tariffs for the sector brought along the need to assess the way in which airports are being operated. On the other hand, with the liberalization of competition among airlines, airports started competing with each other for connecting traffic (to become hub airports) which prompted them to increase their efficiency. This interest has spurred a growing literature aimed at estimating the efficiency of the airport sector. To the best extent of our knowledge, there has not been any study that computes the efficiency and performance of a representative sample of airports in Latin America (LAC). This region has implemented a wide variety of private sector participation schemes including concessions of several groups of airports (Mexico), a single concession of a group of airports with more than 90 percent of the air transport market (Argentina), single airport concessions (Chile), and a combination of single and group airport concessions (Peru). The introduction of private sector brought more than 9 billion dollars of investment to the sector between 1998 and 2008.2 Several hypotheses can be provided to explain why airport efficiency in Latin America has not been the subject of academic research but the most likely reason is the lack of publicly available data. The main objective of this paper is to fill this gap in the literature. We are able to do so using data collected from a questionnaire that was sent, as part of a World Bank study on airports, to the major airport operators in LAC (World Bank, 2010).3 It should be noted that the sample assembled for this study is representative of the air transport sector in the LAC region as it accounts for more than 80% of total passengers and aircraft movements in the region and for 70% of total air cargo. Table 1 lists the airports included in the sample, their type of ownership and passengers in 2008. Latin America and the Caribbean account for a small share of the air transport sector worldwide. Based on 2008 figures (World Bank, 2010) this region only accounted for 7 percent of total passengers, 5 percent of cargo and 8 percent of aircraft movements. Airports are relatively small when ranked on a global scale. LAC has a total of just 4 airports among the top 100 airports worldwide and 14 airports among the top 200. Benito Juárez International Airport in Mexico City, ranked 43rd globally, is the most important airport in the region in terms of passenger traffic, handling a total of about 26.2 million passengers in 2008 (approximately three times less than the number handled by first-ranked Hartsfield-Jackson Airport in Atlanta). As for cargo, the entire LAC region handled a total of 4.6 million metric tons in 2008, only 1 million metric tons more than the amount of cargo traffic handled by the global leader, Hong Kong International Airport (3.6 million metric tons) and three times as much as Miami, North America’s cargo hub (1.5 million metric tons).Table 2 presents descriptive statistics for the average LAC airport in our sample and compares it with the average airport in North America, Europe and Asia. Across size categories, airports in LAC have fewer passengers and aircraft movements. Airports in LAC tend to rely heavily on international passengers relative to airports in North America and Asia-Pacific. The most significant difference in output size between the average airport in LAC and that of the other regions is cargo. In terms of capital inputs, airports in LAC have fewer runways and significantly fewer boarding bridges and tend to be smaller (measured by their terminal size).4 Labor inputs, measured by employees directly employed by the airport operators, indicate that LAC airports have higher number of employees in smaller and relatively large airports while they have fewer employees in medium airports (5–8 million passengers per year).The paper first computes a data envelopment analysis (DEA) activity frontier for commercial airports in the LAC region and identifies the peers of each airport (i.e. comparable airports that operate on the efficiency frontier). We then proceed to measure Total Factor Productivity Changes (TFPC) for LAC airports over the period 2000–2007. The methodology used to perform these estimations consists on the computation of a Malmquist quantity index of TFPC based on the non-parametric DEA approach. The paper is organized as follows. Section 2 presents a brief review of the existing related literature. In Section 3 we present calculations of a DEA activity frontier for commercial airports in the LAC region and use these results to identify their peers. Section 4 presents Malmquist quantity indexes of TFPC for LAC airports over the period 2000–2007. Section 5 presents some concluding remarks.

To the best extent of our knowledge, this paper is the first to conduct a comprehensive efficiency calculation of Latin American airports. The methodology used, Data Envelopment Analysis, allows the identification of the most efficient airports (i.e. airports on the technological frontier) but it also identifies for each inefficient airport the set of peer airports that make up the relevant frontier for which it should be compared. To complement the calculation of the productive frontier we calculated a measure of productivity to know understand how the productive efficiency of each airport in the sample evolved in the period 2000–2007. Our results indicate that technical efficiency in Latin American airports shows notable variations: from airports on the frontier (with a value of 1) to airports that have technical efficiency scores close to 0. When variable returns to scale are assumed (which implies that the scale of operation is not entirely under the control of airport managers, a sensible assumption) of the 21 LAC airports in the sample, 12 are on the frontier. Latin America has put in place different schemes to incorporate private sector participation in the management of airport infrastructure. The results obtained in this paper indicate that between the periods 2000–2003 and 2004–2007 private airports outperformed publicly operated airports with Total Factor Productivity growth rates of +2.8% and −0.9% respectively. When analyzed by size, small and middle size airports (less than 8 million passengers per year) experienced higher rates of Total Factor Productivity growth. The results of the paper as well as its elaboration process provide several policy recommendations, being the most important the need to improve the generation of publicly available information and the quality of economic regulation in the LAC airport sector. Higher-quality regulation will call for consistent data collection and analysis, allowing for the generation of a robust and well-grounded benchmark of airport performance that highlights best performers. Better analysis will make it possible to determine whether policies (introduction of private sector participation, expansion of capacity, changes in the level of tariffs) achieve the desired objectives. A strong foundation of information will increase the quality of decision-making, thereby reducing the unpredictability of regulatory decisions and consequently the cost of capital. National efforts to strengthen airport regulation will be most effective if supported by the knowledge and experience of established institutions, such as the Airport Council International (ACI) and the International Civil Aviation Organization (ICAO). A natural extension of the paper would be to study the determinants of the calculated technical efficiency scores. Likely candidates to be the main drivers of technical efficiency include airport characteristics (hub, share of international and connecting passengers, share of aeronautical revenues), socioeconomic environment (GDP per capita and tourism expenditure in the relevant geographic market), institutional framework (type of ownership, existence of independent regulator) and population concentration (population in the cities served by the airport). Further research should explore alternative methodologies to measure efficiency and collect information on the quality of service provided, as this is a major determinant of airports’ costs and a key input for strengthening programs aimed at increasing competitiveness and growth through tourism, industry, and clusters development or high-value-added air cargo trade.