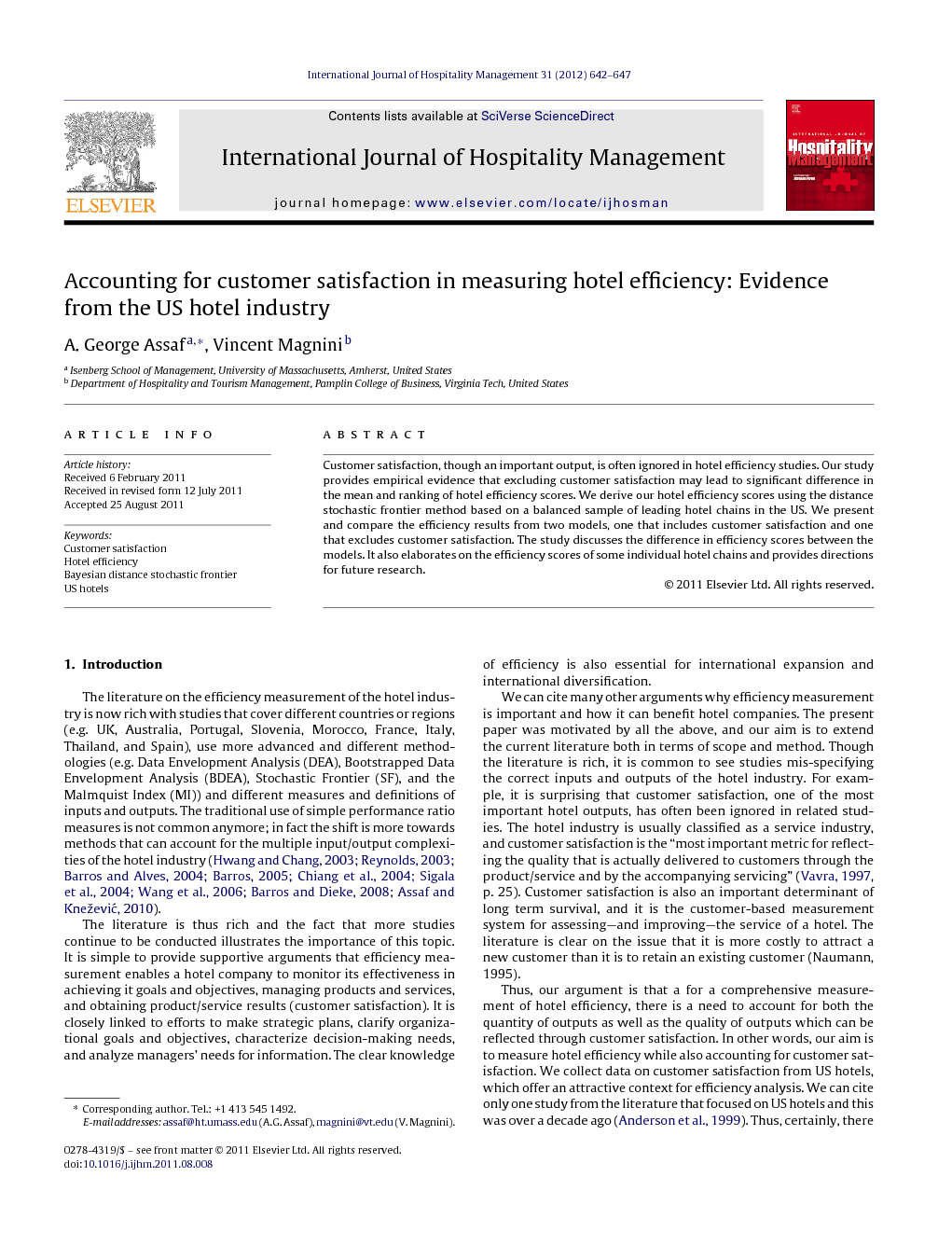 The literature on the efficiency measurement of the hotel industry is now rich with studies that cover different countries or regions (e.g. UK, Australia, Portugal, Slovenia, Morocco, France, Italy, Thailand, and Spain), use more advanced and different methodologies (e.g. Data Envelopment Analysis (DEA), Bootstrapped Data Envelopment Analysis (BDEA), Stochastic Frontier (SF), and the Malmquist Index (MI)) and different measures and definitions of inputs and outputs. The traditional use of simple performance ratio measures is not common anymore; in fact the shift is more towards methods that can account for the multiple input/output complexities of the hotel industry (Hwang and Chang, 2003, Reynolds, 2003, Barros and Alves, 2004, Barros, 2005, Chiang et al., 2004, Sigala et al., 2004, Wang et al., 2006, Barros and Dieke, 2008 and Assaf and Knežević, 2010). The literature is thus rich and the fact that more studies continue to be conducted illustrates the importance of this topic. It is simple to provide supportive arguments that efficiency measurement enables a hotel company to monitor its effectiveness in achieving it goals and objectives, managing products and services, and obtaining product/service results (customer satisfaction). It is closely linked to efforts to make strategic plans, clarify organizational goals and objectives, characterize decision-making needs, and analyze managers’ needs for information. The clear knowledge of efficiency is also essential for international expansion and international diversification. We can cite many other arguments why efficiency measurement is important and how it can benefit hotel companies. The present paper was motivated by all the above, and our aim is to extend the current literature both in terms of scope and method. Though the literature is rich, it is common to see studies mis-specifying the correct inputs and outputs of the hotel industry. For example, it is surprising that customer satisfaction, one of the most important hotel outputs, has often been ignored in related studies. The hotel industry is usually classified as a service industry, and customer satisfaction is the “most important metric for reflecting the quality that is actually delivered to customers through the product/service and by the accompanying servicing” (Vavra, 1997, p. 25). Customer satisfaction is also an important determinant of long term survival, and it is the customer-based measurement system for assessing—and improving—the service of a hotel. The literature is clear on the issue that it is more costly to attract a new customer than it is to retain an existing customer (Naumann, 1995). Thus, our argument is that a for a comprehensive measurement of hotel efficiency, there is a need to account for both the quantity of outputs as well as the quality of outputs which can be reflected through customer satisfaction. In other words, our aim is to measure hotel efficiency while also accounting for customer satisfaction. We collect data on customer satisfaction from US hotels, which offer an attractive context for efficiency analysis. We can cite only one study from the literature that focused on US hotels and this was over a decade ago (Anderson et al., 1999). Thus, certainly, there is room for more studies on this country especially that the US hotel industry has gone through many changes (e.g. economic, political, etc.) over the last 10 years. The US hotel industry is also the largest in the world, and often attracts the attention of academic and local and international industry readers. The study innovates with the methodology adapted to measure hotel efficiency. The available studies are mainly dominated by two techniques: the Data Envelopment Analysis (DEA) and Stochastic Frontier (SF) methodologies. While both these methods have their advantages, there are many more recent versions of these methodologies that proved to provide more robust efficiency estimates. We use here the Bayesian distance stochastic frontier approach which improves on both the DEA and SF methodologies (Koop et al., 1997 and O’Donnell and Coelli, 2005). For instance, the method allows for the inclusion for multiple outputs while also accounting for measurement error. Thus, it combines the advantages of both the DEA and SF methods. The paper proceeds as follows: Section 2 presents the literature review. Section 3 introduces the input/output variables used in the study, and elaborates on the sources of data collection. Section 4 elaborates on the methodology. Section 5 presents and discusses the results, and Section 6 concludes.

This study contributes to the extant literature on hotel efficiency by illustrating the significance of using customer satisfaction as an output variable in modeling. In prior hotel efficiency studies, the most common output measures included revenue (e.g. Anderson et al., 1999 and Hwang and Chang, 2003) and number of rooms sold (Barros, 2005 and Tsaur, 2001). Using publicly available data from the American Customer Satisfaction Index, the current study illustrates that a firm's efficiency ranking among competitors can change depending upon whether or not customer satisfaction is included as an output variable in modeling. In the current study, as depicted in Table 3, the most extreme example of this point is the Wyndham Hotel and Resorts which ranked fourth of eight competitors in an efficiency model that did not incorporate customer satisfaction data, but ranked seventh when the model included satisfaction as an output. The notion that customer satisfaction can have a significant influence in efficiency modeling has strong theoretical anchoring in the marketing literature. That is, satisfaction has a strong linkage with loyalty (Anderson and Sullivan, 1993) which in turn reduces the cost of future transactions (Reichheld and Sasser, 1990); decreases price elasticities (Krishnamurthi, 1991); creates a service failure buffer (Cronin and Taylor, 1994); and spawns [reduces] positive [negative] word-of-mouth (Anderson, 1998). From a managerial perspective, such distance stochastic frontier modeling could prove useful for the purpose of corporate benchmarking. For example, nearly all of the major players in the full service hotel business in the USA receive regular benchmarking reports from Smith Travel Research (STR) which detail items such as the occupancy and REVPAR rates of competitor hotels. While such benchmarking information is managerial useful, certainly coupling these performance measures (outputs) with business inputs would provide another lens through which corporate performance and efficiency can be benchmarked against competitors. In fact, one distinct advantage to the modeling reported in this research over alternate forms is its ability to accommodate multiple outputs. Thus, the key performance measures commonly used in hotel corporate benchmarking can be used in the modeling to assess efficiency relative to competitors. Efficiency ratings through time also provide some pragmatic value. One application could be to compare the efficiency of various brands within a company. Dozens of hotel brands have emerged in the U.S. marketplace in recent decades; therefore, Marriott, for instance, could use the modeling reported here to compare efficiencies of their Courtyard brand versus their Springhill Suites brand. The results could then be used in making branding decisions and in advising potential franchisees regarding their brand selections. In a different application, longitudinal efficiency scores could also be used to assess the performance of territorial or regional management teams. The incorporation of customer satisfaction as an output variable is particularly useful for this application because it is an output measure associated with long-run firm health. Conversely, a regional management team could maximize other outputs such as revenue at the expense of long-run firm health. As to whether efficiency ratings can correlate with stock prices, unfortunately, this question cannot be addressed in the current study because the firms that demonstrated the greatest losses in efficiencies through time are not publicly traded. Conversely, the Marriott Corporation shows an increase in efficiency and an increased share price for the same period, but drawing conclusions from a sample of one is unscientific at best. Future research is warranted which explores potential correlations with more data points. Also on a managerial level, to determine drivers of firm efficiency, hoteliers need only look to model inputs and outputs. In our model, number of outlets, number of full time employees, and operational costs served as inputs; customer satisfaction, revenue, and occupancy rate served as outputs. One of the most efficient firms in our study, Marriott, in 2008 announced a corporate-wide initiative to cross-train more of their associates (www.blogs.marriott.com) (BLOGS, 2008). Such a cross-training initiative could potentially reduce a model input [number of full-time employees] and increase an output variable [customer satisfaction]. This cross-training example is used to illustrate one use of efficiency model analysis at a managerial level because it demonstrates the ability of a firm to establish an initiative (cross-training) that could allow for a lower-level of an input (number of full time employees) and accommodate higher levels of outputs (revenue and occupancy rates). As is the case with any research, the results of this study are not perfect and must be tempered with limitations. While our model was built to reasonably account for the quality and quantity of inputs and outputs, it is prudent to note that for some of the time periods of this study, ACSI scores were not measured for all of the firms; consequently, mean substitutions were used in these cases. Going forward this issue should not be quite as inhibiting for future modeling because all of the included hotel firms are now regularly included in the ACSI index. In addition, our study was limited in that it focused upon the U.S. hotel industry. While the U.S. hotel industry is the largest in the world, and often attracts the attention of academic and local and international industry readers, future modeling in other hotel markets would be an interesting extension of the existing study. While customer satisfaction data would be scarce in some markets, it would be readily available in others such as the case in Sweden.