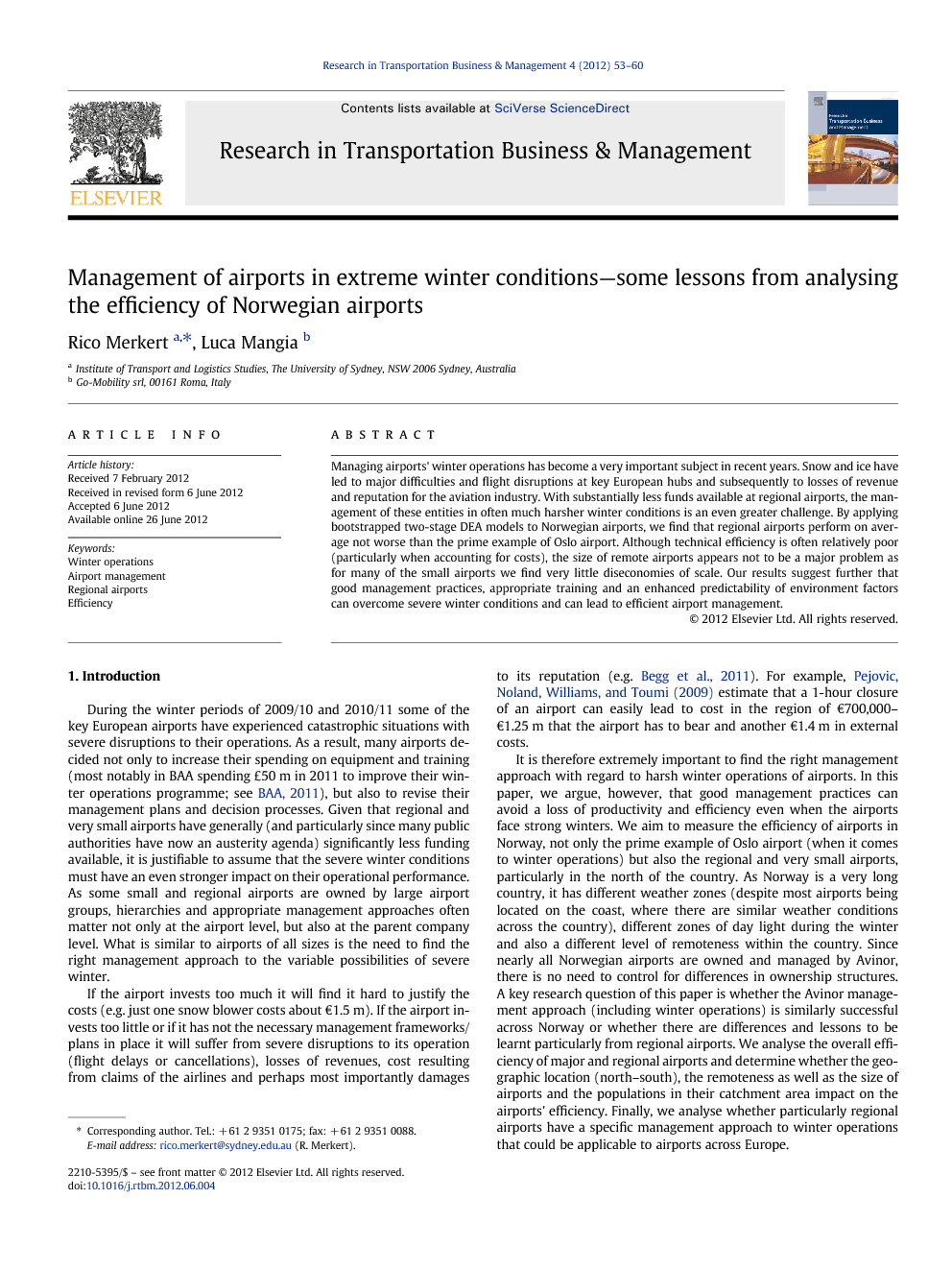 Managing airports' winter operations has become a very important subject in recent years. Snow and ice have led to major difficulties and flight disruptions at key European hubs and subsequently to losses of revenue and reputation for the aviation industry. With substantially less funds available at regional airports, the management of these entities in often much harsher winter conditions is an even greater challenge. By applying bootstrapped two-stage DEA models to Norwegian airports, we find that regional airports perform on average not worse than the prime example of Oslo airport. Although technical efficiency is often relatively poor (particularly when accounting for costs), the size of remote airports appears not to be a major problem as for many of the small airports we find very little diseconomies of scale. Our results suggest further that good management practices, appropriate training and an enhanced predictability of environment factors can overcome severe winter conditions and can lead to efficient airport management.

During the winter periods of 2009/10 and 2010/11 some of the key European airports have experienced catastrophic situations with severe disruptions to their operations. As a result, many airports decided not only to increase their spending on equipment and training (most notably in BAA spending £50 m in 2011 to improve their winter operations programme; see BAA, 2011), but also to revise their management plans and decision processes. Given that regional and very small airports have generally (and particularly since many public authorities have now an austerity agenda) significantly less funding available, it is justifiable to assume that the severe winter conditions must have an even stronger impact on their operational performance. As some small and regional airports are owned by large airport groups, hierarchies and appropriate management approaches often matter not only at the airport level, but also at the parent company level. What is similar to airports of all sizes is the need to find the right management approach to the variable possibilities of severe winter. If the airport invests too much it will find it hard to justify the costs (e.g. just one snow blower costs about €1.5 m). If the airport invests too little or if it has not the necessary management frameworks/plans in place it will suffer from severe disruptions to its operation (flight delays or cancellations), losses of revenues, cost resulting from claims of the airlines and perhaps most importantly damages to its reputation (e.g. Begg et al., 2011). For example, Pejovic, Noland, Williams, and Toumi (2009) estimate that a 1-hour closure of an airport can easily lead to cost in the region of €700,000–€1.25 m that the airport has to bear and another €1.4 m in external costs. It is therefore extremely important to find the right management approach with regard to harsh winter operations of airports. In this paper, we argue, however, that good management practices can avoid a loss of productivity and efficiency even when the airports face strong winters. We aim to measure the efficiency of airports in Norway, not only the prime example of Oslo airport (when it comes to winter operations) but also the regional and very small airports, particularly in the north of the country. As Norway is a very long country, it has different weather zones (despite most airports being located on the coast, where there are similar weather conditions across the country), different zones of day light during the winter and also a different level of remoteness within the country. Since nearly all Norwegian airports are owned and managed by Avinor, there is no need to control for differences in ownership structures. A key research question of this paper is whether the Avinor management approach (including winter operations) is similarly successful across Norway or whether there are differences and lessons to be learnt particularly from regional airports. We analyse the overall efficiency of major and regional airports and determine whether the geographic location (north–south), the remoteness as well as the size of airports and the populations in their catchment area impact on the airports' efficiency. Finally, we analyse whether particularly regional airports have a specific management approach to winter operations that could be applicable to airports across Europe. The paper is structured as follows. Section 2 will briefly discuss some of the existing literature and discussion on the impact of winter operations on European airports. 3 and 4 detail our methodology and the data. Section 5 discusses the results whilst Section 6 derives some scholarly contributions and management implications of our findings.

This paper confirms Merkert et al.'s (2012) theoretical findings, that DEA models are applicable in the small/regional airport context in the sense that these models deliver insightful/meaningful results even when (different to other studies such as Assaf, 2010) very small and major airports are part of the same sample. Our results suggest that the management of severe winter conditions is handled well not only at the internationally well recognised best practice case of Oslo airport but at most Norwegian airports. The harsh winter conditions (particularly with regard to visibility and daylight hours) have much less (if any) negative impact on the overall performance of individual Norwegian airports than expected. In fact, there is no significant impact of the latitudinal location (which is assumed to be related with adverse weather/daylight/visibility conditions) on the physical input/output performance of the analysed airports. The significant negative impact of latitudinal location on technical efficiency, when cost input variables are used in the DEA models, is insofar interesting as population and runway area (and hence airport size) do not have a significant impact on the cost reflecting technical efficiency scores. The not unreasonable assumption that winter conditions become worse the further north one goes (confirmed in the interviews with the local airport managers), therefore indicate, that on average the harsher conditions but also the generally less favourable business environment of northern airports, have a minor impact on their cost reflecting technical efficiency. However, that effect is much smaller than expected and our interview findings confirm that the overall Avinor management approach to winter operations is successfully applied to even the smallest airport in the group. We also find, particularly for the physical input/output relationships, diseconomies of scale at most airports. This suggests that even good management at relatively small and remote airports will always, at least in part, be offset by diseconomies of scale. In terms of management implications, we conclude for that reason that the Avinor ownership and management model is beneficial to the Norwegian case (airports centrally controlled with limited competition between airports). Our recommendation to management to generally try to grow the size of the airport (except from the runway area) would of course have further implications for economic regulation, as many regulators (e.g. UK CAA) prefer to see competition between an as many airport operators as possible compared to one airport parent company (e.g. BAA) dominating entire airport systems (e.g. the airports in and around London). As it is difficult to separate the ownership and competition effects from other impact factors on airport efficiency, we suggest that further research needs to be carried out in this area. In terms of the impact of good management of severe winter conditions, we have shown that airports' overall efficiency is much less affected by their latitudinal location and hence exposure to unfavourable winter conditions (but also size of the airport) than expected. The Avinor management approach to winter operations, which reportedly includes not only good preparation (management plans etc.) and continues investment but also appropriate and regular staff training, does not show any weaknesses across the group in terms of northern airports having a much inferior technical efficiency in comparison to airports such as Oslo or Bergen. This empirical result has been confirmed in the interviews by the airport managers and is our key finding. This group management approach to winter operations could be of interest to major hub airports also, particularly in the UK, as the London Heathrow example has shown. However, it is now widely accepted, that the 2010 snow chaos at Heathrow is partially attributable to the fact that 2010 has been the coldest winter in the UK for some 100 years. The argument is that the Heathrow airport management was surprised and overwhelmed by the amount and the wrong type of snow (e.g. Begg et al., 2011). What followed was a £50 m investment in equipment and improved crisis management plans. While the latter is sensitive, the earlier could be questioned in terms of cost-benefit evaluations. Already the winter 2011 was much milder with almost no snow event and hence one could argue that parts of the £50 m spending in equipment could have been more wisely. What our results suggest is, nevertheless, that good preparation and management plans are useful and that they help Norwegian airports to remain efficient even in unfavourable winter conditions. Particularly in regions where winter conditions are unpredictable it should be, therefore, sensible to ensure that spending is targeted at appropriate crisis/snow management plans, sufficient and training staff resources, systems for command and control and communication between the airport community (including airlines) and passengers (inclusive securing care and support). The latter is important, as disruptions to airport operations will result in revenue losses and also in damages to the airport's brand. What we also found in our interviews is that the success of winter operations at airports is often a supply chain management issue that depends on the management of many individual parts of the value chain. For the mentioned revenue and branding/image reasons it is in the airport's interest to try to manage and control as much risk as possible over as many as possible elements of that airport operation supply chain. Further research is, therefore, needed to obtain a clearer picture of the impact of successful winter supply chain management on the overall performance of airports.