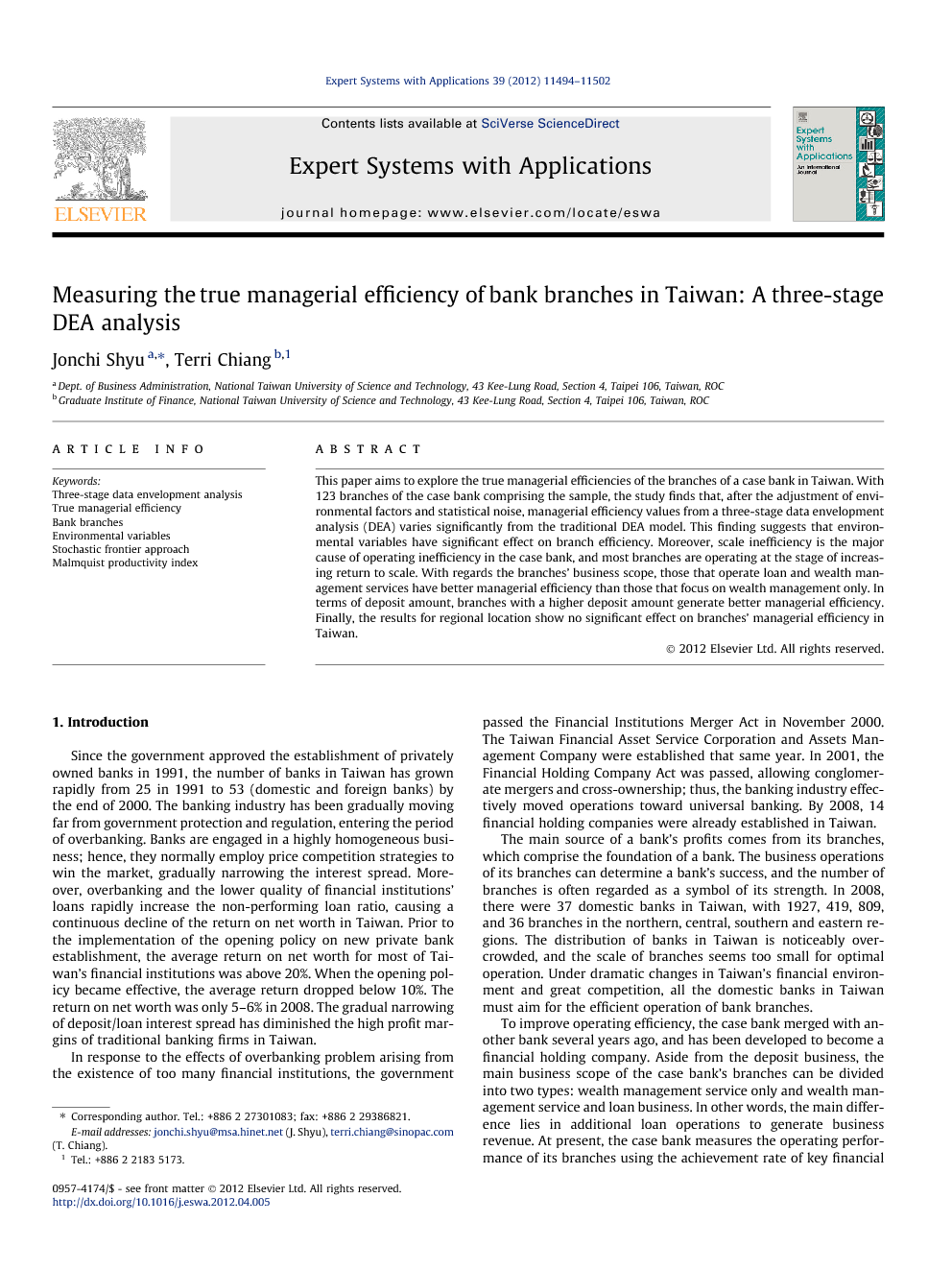 Since the government approved the establishment of privately owned banks in 1991, the number of banks in Taiwan has grown rapidly from 25 in 1991 to 53 (domestic and foreign banks) by the end of 2000. The banking industry has been gradually moving far from government protection and regulation, entering the period of overbanking. Banks are engaged in a highly homogeneous business; hence, they normally employ price competition strategies to win the market, gradually narrowing the interest spread. Moreover, overbanking and the lower quality of financial institutions’ loans rapidly increase the non-performing loan ratio, causing a continuous decline of the return on net worth in Taiwan. Prior to the implementation of the opening policy on new private bank establishment, the average return on net worth for most of Taiwan’s financial institutions was above 20%. When the opening policy became effective, the average return dropped below 10%. The return on net worth was only 5–6% in 2008. The gradual narrowing of deposit/loan interest spread has diminished the high profit margins of traditional banking firms in Taiwan. In response to the effects of overbanking problem arising from the existence of too many financial institutions, the government passed the Financial Institutions Merger Act in November 2000. The Taiwan Financial Asset Service Corporation and Assets Management Company were established that same year. In 2001, the Financial Holding Company Act was passed, allowing conglomerate mergers and cross-ownership; thus, the banking industry effectively moved operations toward universal banking. By 2008, 14 financial holding companies were already established in Taiwan. The main source of a bank’s profits comes from its branches, which comprise the foundation of a bank. The business operations of its branches can determine a bank’s success, and the number of branches is often regarded as a symbol of its strength. In 2008, there were 37 domestic banks in Taiwan, with 1927, 419, 809, and 36 branches in the northern, central, southern and eastern regions. The distribution of banks in Taiwan is noticeably overcrowded, and the scale of branches seems too small for optimal operation. Under dramatic changes in Taiwan’s financial environment and great competition, all the domestic banks in Taiwan must aim for the efficient operation of bank branches. To improve operating efficiency, the case bank merged with another bank several years ago, and has been developed to become a financial holding company. Aside from the deposit business, the main business scope of the case bank’s branches can be divided into two types: wealth management service only and wealth management service and loan business. In other words, the main difference lies in additional loan operations to generate business revenue. At present, the case bank measures the operating performance of its branches using the achievement rate of key financial indicators. Although the calculation is simple and easy, a single indicator provides limited interpretation. Moreover, a cross analysis between different indicators is difficult to conduct. At the same time, the target achievement rate is mainly based on past performance. There is no assessment regarding whether or not the branches can properly utilize existing resources to achieve the desired output or employ technology and innovative capabilities to improve the branch’s performance. In addition to the supervision of the branches in achieving their targets, more importantly, management at headquarter should identify the reasons for failure to achieve future targets. Such reasons include the branch managers’ effective use of input resources to accomplish the desired output, the proper scale of branches, and the management’s facilitation of improvements in branch efficiency. Previous studies on the managerial efficiency of bank branches (Camanho and Dyson, 1999, Hartman et al., 2001 and Lin et al., 2009) have not considered the different characteristics with which bank branches operate (e.g., branch size, years of operation, business type). The above studies assume that the difference in bank branch efficiency mainly comes from management decisions, rather than specific environmental conditions. In fact, bank branches have different characteristics. Hence, their favorable (unfavorable) operating environments or good (bad) luck can call for less (more) input in maintaining output levels. Ignoring these types of circumstances may result in biased efficiency estimates and misleading policy applications (Avkiran & Rowlands, 2008). In addition, without adjustment for the different branches’ characteristics, some good managers are likely to be penalized for low performance scores due to factors beyond the managerial control, whereas poor managers can be rewarded for operating in favorable environments. Hence, the main contribution of this study is the provision of more valuable strategic suggestions for bank branches, including selections for business scope as well as the proper deposit amount and regional location, based on the true managerial efficiency obtained by the three-stage data envelopment analysis (DEA) model with consideration of environmental variables and statistical noise. The findings can help bank branches understand the real causes of poor operating efficiency and make improvements accordingly. At the same time, the Malmquist productivity index (MPI) can also provide explanations for the reasons why some branches underperform and a way by which to improve productivity at different time periods. Therefore, the present study can provide banks with a set of methods to measure the managerial efficiency of bank branches effectively as well as offer management a reference for the assessment of its branches’ true operating efficiencies.

This paper uses the first-stage and third-stage DEA approach to measure the operating efficiencies of 123 branches of the case bank in the first six months of 2007 and 2008. The managerial efficiency of the branch’s operation models based on business scope, deposit amount, and regional location are also investigated. The results from the first-stage DEA indicate that the major cause of operating inefficiency is scale inefficiency, namely, the waste of production resources brought about by not operating at the optimal scale. After the adjustment of environmental variables and statistical noise, the average TE in the third-stage DEA reduced significantly than the first stage. This finding suggests an overestimation of the efficiency value due to better environmental factors for branches. However, the PTE value obtained by the three-stage DEA improved significantly from that in the first stage, indicating the good performance of branch managers in terms of resource allocation and management skills. The major cause of the branches’ operating inefficiency is scale inefficiency. In other words, most branches operated at the increasing return to scale stage. The findings based on business scope and deposit amount suggest that a branch operating both wealth management service and loan business have higher efficiency values than those that operate wealth management service only. Meanwhile, branches with a larger deposit amount have a higher efficiency value. A comprehensive cross-analysis showed that branches in the southern region and those that operate both wealth management services and loan businesses have greater potential. In comparison, branches in the northern region that operate wealth management services only showed relatively poor performance. According to the empirical results, we propose the following suggestions to the management level of the case bank. First, most branches operate at the stage of increasing return to scale, and the relationship between the input and output variables shows that branches with poor performance have relatively inadequate input, thereby limiting their ability to expand. Thus, the management of the case bank should consider the feasibility of merging those branches with others to improve SE. In addition, when establishing new branches, including both loan and wealth management services can help improve the branch’s operating efficiency. Branches that operate wealth management services only should set a target deposit of at least NT$4 billion to ensure an above average performance. Although varied branch efficiency values in terms of regional location are statistically insignificant, the overall productivity in the northern region declined from 2007 to 2008. The existence of approximately 1500 branches in the Great Taipei area has led to the fierce competition in the northern region. The case bank has established nearly 100 branches in the Great Taipei area; thus, the branches may also compete with each other and possibly generate spillover effects. Therefore, head office management should consider relocating some branches in the northern region to the southern region to increase the overall efficiency of the case bank. Due to restrictions in data access, this paper only analyzes the branches of one bank. Future studies can evaluate the efficiency values of the branches of all banks in a certain region to understand the relative competitive position of a branch compared with other bank branches. Alternately, the optimal number of branches in a certain region may be studied for the reference of banks in pursuit of scale economy. Finally, the input and output variables used in the present study come from the operating data of the case bank. In practice, the operating efficiency of a branch is not solely reflected by quantitative variables. Future studies could include qualitative variables, such as customer satisfaction and service quality, in order to achieve more concrete results in determining the managerial efficiency of bank branches.