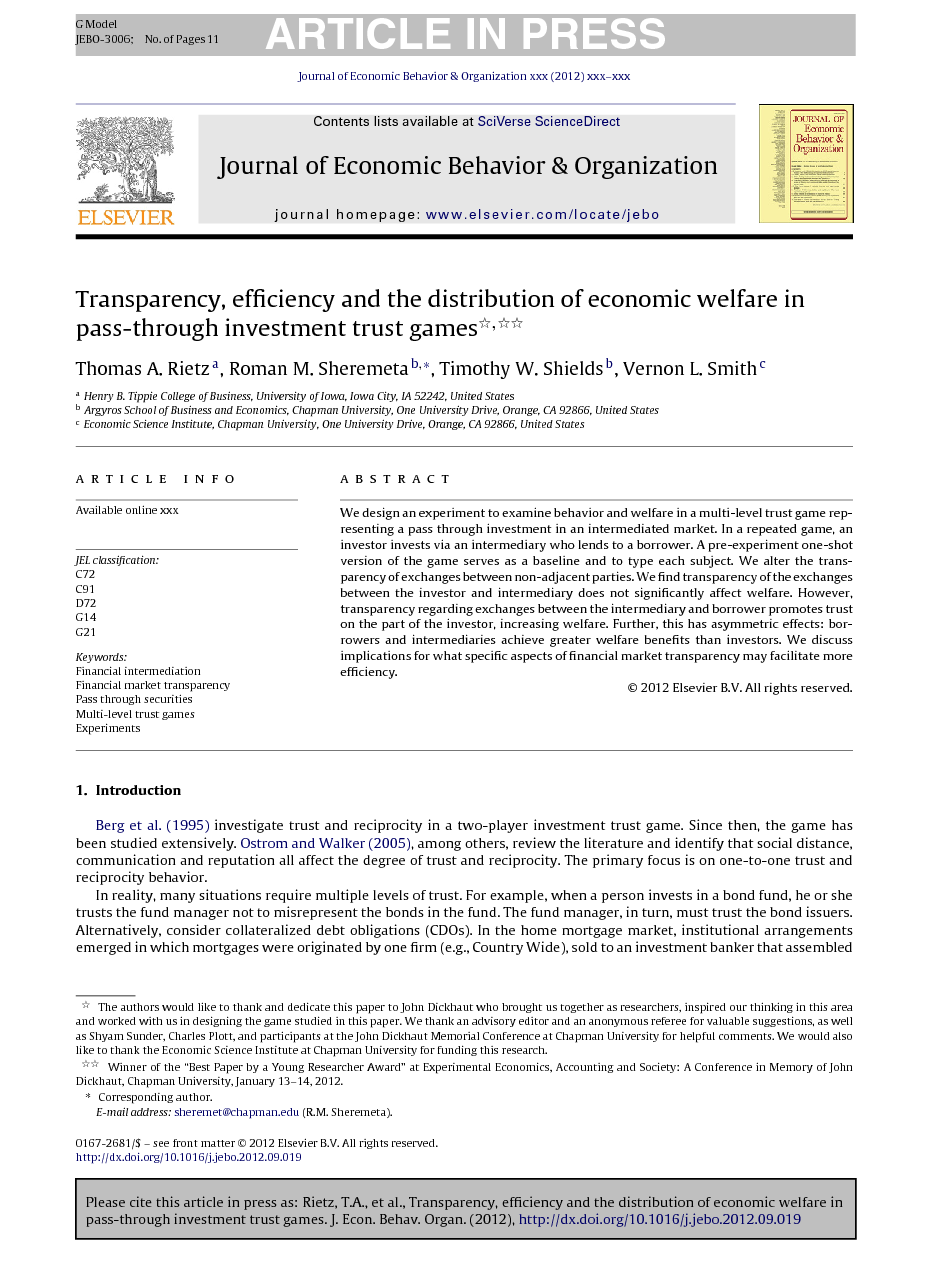 We design an experiment to examine behavior and welfare in a multi-level trust game representing a pass through investment in an intermediated market. In a repeated game, an investor invests via an intermediary who lends to a borrower. A pre-experiment one-shot version of the game serves as a baseline and to type each subject. We alter the transparency of exchanges between non-adjacent parties. We find transparency of the exchanges between the investor and intermediary does not significantly affect welfare. However, transparency regarding exchanges between the intermediary and borrower promotes trust on the part of the investor, increasing welfare. Further, this has asymmetric effects: borrowers and intermediaries achieve greater welfare benefits than investors. We discuss implications for what specific aspects of financial market transparency may facilitate more efficiency.

We design an experiment to examine welfare and behavior in a multi-level investment trust game. In the scenario, an investor invests via an intermediary who lends to a borrower in a repeated game. We alter the transparency of exchanges between non-adjacent parties. We find that transparency does not change aggregate behavior or efficiency in a one-shot multi-level trust game. However, in repeated multi-level trust games, transparency matters. Providing transparency to the investor (i.e., allowing the investor to see the exchange between the intermediary and the borrower) increases efficiency and payoffs to all players, while providing transparency to the borrower (i.e., allowing the borrower to see the exchange between the investor and intermediary) does not change efficiency and payoffs significantly. Providing transparency to the investor also shifts the distribution of payoffs towards intermediaries and borrowers, while providing transparency to the borrower does not change the distribution of payoffs significantly. We introduce and test the ability of a one-shot game to measure the trust characteristics of subjects and to predict trusting behavior in a subsequent repeated version of the same stage game. This procedure may have value in other applications not yet explored. Overall, our findings indicate that, in the multi-level trust game, transparency can matter, improving outcomes in financial markets and economic welfare. On the other hand, only one side of transparency matters. For financial markets this implies that not all forms of transparency are equal in their ability to improve market outcomes. In the analog pass through securities market (the collateralized, home mortgage debt obligation market we discussed in the introduction), the ability to verify the credit worthiness of borrowers would seem to be the most important aspect of transparency. We also document that transparency affects welfare asymmetrically. When transparency matters, it is borrowers and intermediaries who benefit more than investors in relative terms. In our game, this arises because investors invest more, making everyone better off. At the same time, borrowers and intermediaries choose to keep a relatively larger share of the welfare gains. If the policy goal of the government is to make home ownership (and borrowing in general) more accessible, then transparency about borrower's decisions can facilitate this while shifting economic welfare toward the ultimate borrowers. Of course, in a naturally occurring market, there would be a tradeoff between transparency at the retail level and privacy. Further, here, the distribution of surplus depends on the unrestricted choices of the borrowers and intermediaries about how much to return. The distribution of welfare gains in naturally occurring markets may depend on the relative bargaining powers of the agents involved in the transactions. There are several obvious extensions to our research. First, the trust relationship may involve even higher orders and our game would be easy to generalize to three or more levels. We suspect that in situations beyond two layers of trust transparency would matter most to those who are at an informational disadvantage (i.e., investors).14 Second, trust may be circular instead of linear as we have in our game. It would be simple to design a game where either the borrower gave back money both to the investor and intermediary or, alternatively to the investor with the investor paying the intermediary (as in Sheremeta and Zhang, 2009). Second, transparency here is in terms of actions. Transparency with respect to entire strategies may have different effects. Finally, calls for reform often include reporting standards and oversight bodies. One could easily add a monitoring agent to replace direct transparency in our setup. One could also report prior aggregate outcomes (as in the original Berg et al., 1995 paper) or current aggregate information. Of course, all may interact with transparency and help us inform policy with respect to transparency, reporting and oversight in financial markets.