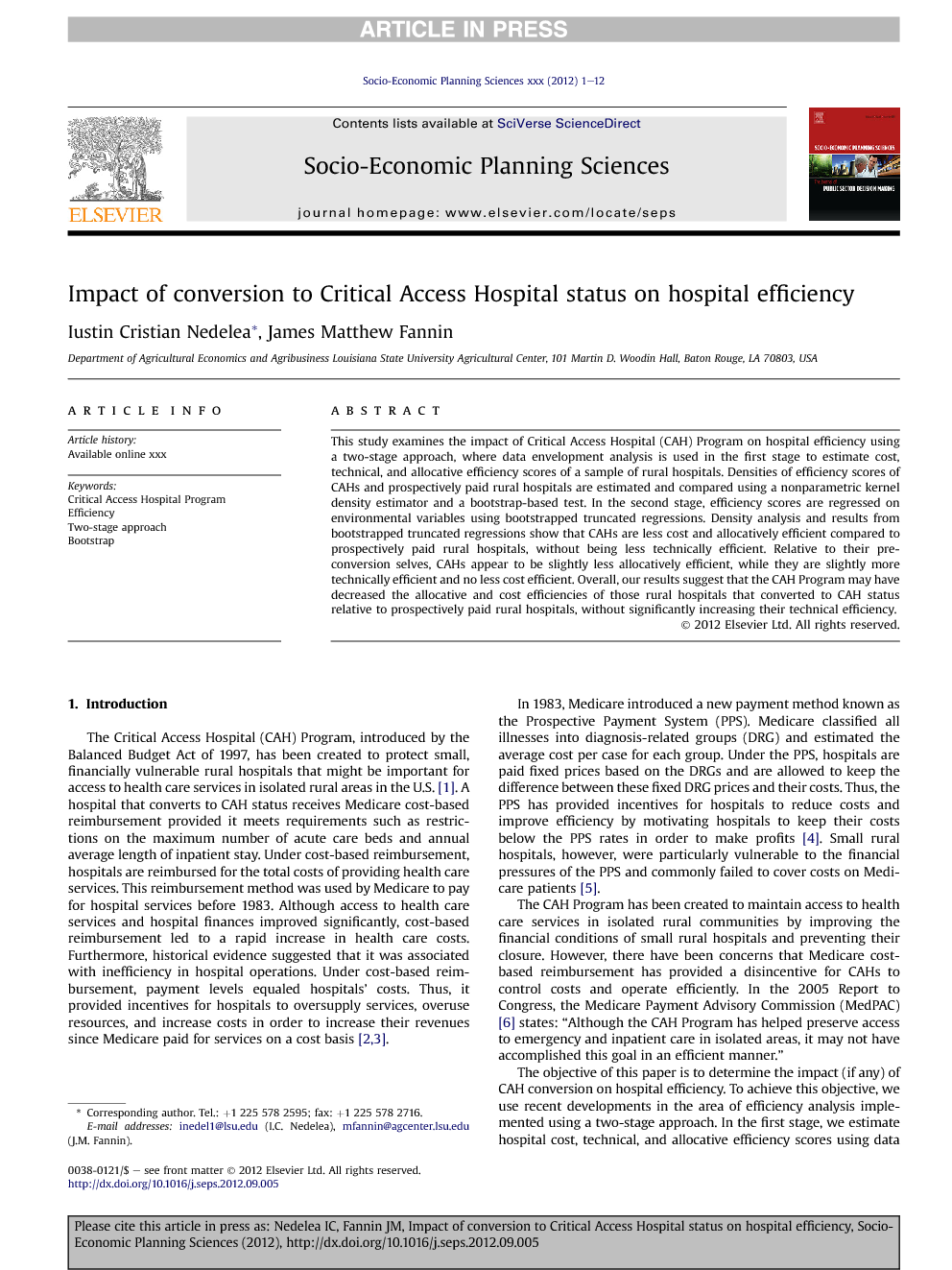 The Critical Access Hospital (CAH) Program, introduced by the Balanced Budget Act of 1997, has been created to protect small, financially vulnerable rural hospitals that might be important for access to health care services in isolated rural areas in the U.S. [1]. A hospital that converts to CAH status receives Medicare cost-based reimbursement provided it meets requirements such as restrictions on the maximum number of acute care beds and annual average length of inpatient stay. Under cost-based reimbursement, hospitals are reimbursed for the total costs of providing health care services. This reimbursement method was used by Medicare to pay for hospital services before 1983. Although access to health care services and hospital finances improved significantly, cost-based reimbursement led to a rapid increase in health care costs. Furthermore, historical evidence suggested that it was associated with inefficiency in hospital operations. Under cost-based reimbursement, payment levels equaled hospitals' costs. Thus, it provided incentives for hospitals to oversupply services, overuse resources, and increase costs in order to increase their revenues since Medicare paid for services on a cost basis [2] and [3]. In 1983, Medicare introduced a new payment method known as the Prospective Payment System (PPS). Medicare classified all illnesses into diagnosis-related groups (DRG) and estimated the average cost per case for each group. Under the PPS, hospitals are paid fixed prices based on the DRGs and are allowed to keep the difference between these fixed DRG prices and their costs. Thus, the PPS has provided incentives for hospitals to reduce costs and improve efficiency by motivating hospitals to keep their costs below the PPS rates in order to make profits [4]. Small rural hospitals, however, were particularly vulnerable to the financial pressures of the PPS and commonly failed to cover costs on Medicare patients [5]. The CAH Program has been created to maintain access to health care services in isolated rural communities by improving the financial conditions of small rural hospitals and preventing their closure. However, there have been concerns that Medicare cost-based reimbursement has provided a disincentive for CAHs to control costs and operate efficiently. In the 2005 Report to Congress, the Medicare Payment Advisory Commission (MedPAC) [6] states: “Although the CAH Program has helped preserve access to emergency and inpatient care in isolated areas, it may not have accomplished this goal in an efficient manner.” The objective of this paper is to determine the impact (if any) of CAH conversion on hospital efficiency. To achieve this objective, we use recent developments in the area of efficiency analysis implemented using a two-stage approach. In the first stage, we estimate hospital cost, technical, and allocative efficiency scores using data envelopment analysis (DEA) [7]. In simple terms, a firm is technically efficient if it uses the minimum quantities of inputs to produce a given level of outputs [8]. For the hospital sector, technical efficiency refers to the relationship between inputs used (i.e., capital and labor) and outputs produced (i.e., outpatient visits, inpatient days, surgeries, etc.). Allocative efficiency reflects the ability of a hospital to produce a given level of outputs using the optimal combination of inputs (i.e., cost-minimizing), given input prices. A hospital is (overall) cost efficient when it is both technically and allocatively efficient. Cost efficiency indicates the extent to which the hospital minimizes the cost of producing a specific level of outputs, given input prices. Further, the densities of efficiency scores of CAHs and PPS (non-CAH) rural hospitals (which include hospitals prior to CAH conversion as well as non-converting, PPS rural hospitals) are estimated and compared using a nonparametric kernel density estimator and a bootstrap-based test proposed by Simar and Zelenyuk [9]. In the second stage, we use truncated regressions with bootstrap suggested by Simar and Wilson [10] to investigate how the conditional mean of efficiency scores is influenced by environmental variables such as CAH status, Medicare and Medicaid reimbursement, hospital ownership, etc. Previous studies analyzed the impact of Medicare reimbursement changes on either cost efficiency [3] and [11] or technical efficiency of health care facilities [4] using standard methods such as DEA or stochastic frontier analysis. To the best of our knowledge, this is the first study that examines differences in all three Farrell [8] type efficiency measures jointly between hospitals operating under different Medicare reimbursement systems, using methodological advancements proposed by Simar and Zelenyuk [9] and Simar and Wilson [10]. We hypothesize that cost-based reimbursed CAHs are more cost inefficient than PPS rural hospitals because of the differences in Medicare reimbursement methods, and thus incentives, facing these two groups of rural hospitals. Additionally, we analyze not only whether CAHs are more cost inefficient than PPS rural hospitals but also whether this cost inefficiency increase comes more from technical inefficiency (i.e., hospitals do not use the minimum input quantities to produce their output levels) or allocative inefficiency (i.e., hospitals do not use the least-cost combination of inputs, given input prices, in producing their outputs). Section 2 of this article presents background information on the CAH Program and Section 3 briefly reviews previous research on the performance of CAHs as well as on the impact of Medicare reimbursement changes on the efficiency of health care facilities. In Section 4, we summarize the methodological approach and the data used in the analysis is described in Section 5. Section 6 presents the results and discusses the principal findings, with conclusions presented in Section 7.

This study analyzed the impact of conversion to CAH status on hospital efficiency using a two-stage approach and recent methodological advancements in efficiency analysis. In the first stage, DEA was used to estimate hospital cost, technical, and allocative efficiency scores. Using a kernel density estimator and a bootstrap-based test, we estimated and compared the distributions of inefficiency scores of CAHs before and after conversion, as well as with those of a comparison group of non-converting, PPS rural hospitals. In the second stage, bootstrapped truncated regressions were estimated in which cost, technical, and allocative inefficiencies were regressed on explanatory variables. The results of Simar–Zelenyuk-adapted-Li test and density analysis showed that CAHs were less cost and allocatively efficient than the comparison group of non-converting, PPS rural hospitals in 2005 and 2006, while they were no less technically efficient. When compared with their pre-conversion selves in 1997 and 1998, CAHs appeared to be slightly less allocatively efficient, while they were slightly more technically efficient and no less cost efficient. The second stage bootstrapped truncated regression results showed that CAHs were less cost and allocatively efficient than PPS rural hospitals, while they were no less technically efficient. A shortcoming of this research is the lack of quality controls. While our results would have been strengthened with the inclusion of quality measures, the approach taken here to study the impact of CAH conversion on hospital efficiency made it impossible to find quality measures for the two years before conversion (1997 and 1998). As new data become available, future research on CAH efficiency should incorporate quality controls in the methodological advancements proposed by Simar and Wilson [10]. The Critical Access Hospital Program has created incentives to maintain inpatient access in remote rural areas of the U.S. at an increased cost. While the results suggest that overall economic (cost) efficiency declined, the inability to quickly substitute to lower cost inputs as input prices change may be the leading driver of that inefficiency. Federal programs should consider strategies that help CAHs reduce labor inputs as their labor costs increase as well as identify lower cost models for providing up-to-date facilities and equipment.