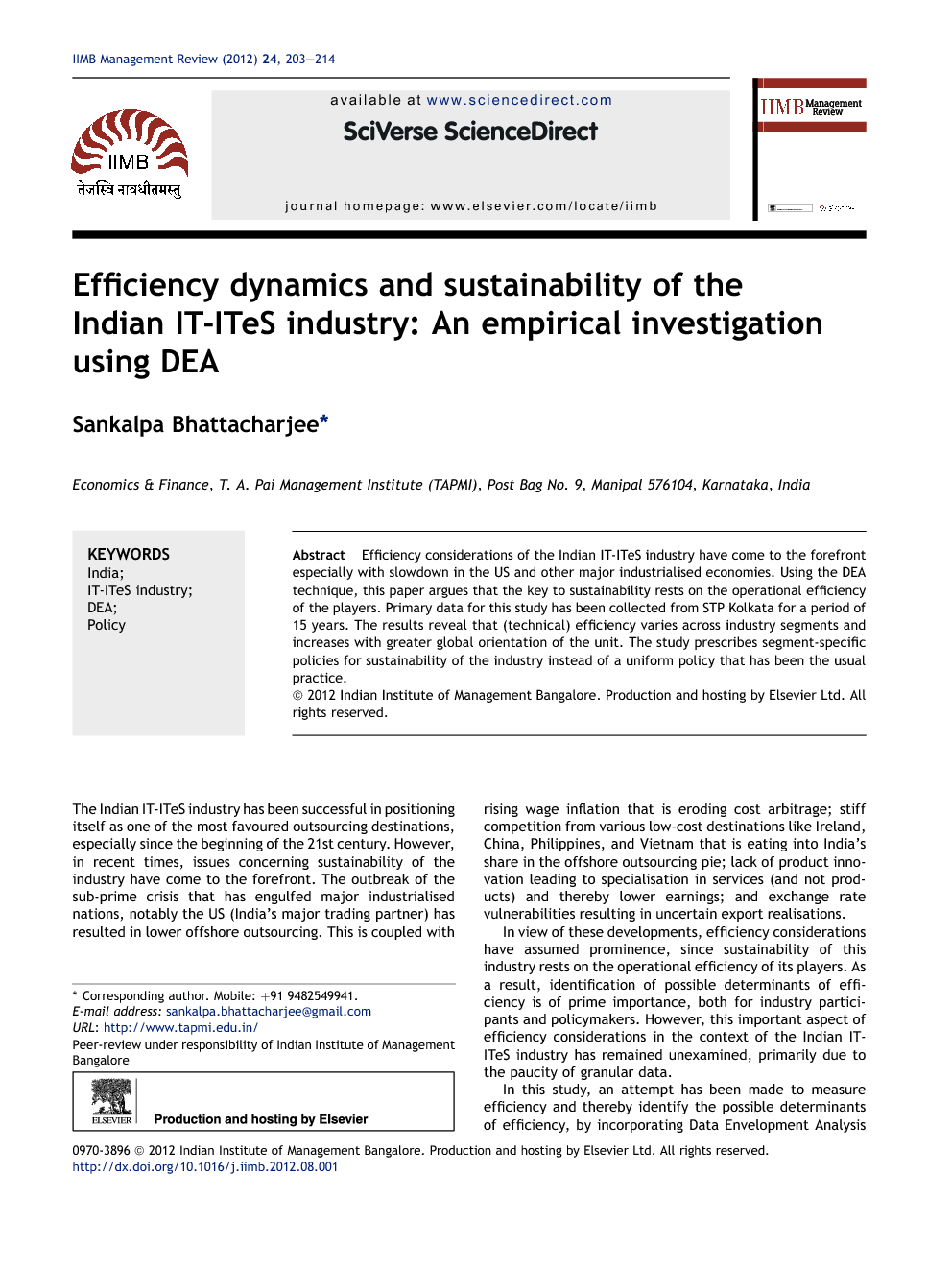 Efficiency considerations of the Indian IT-ITeS industry have come to the forefront especially with slowdown in the US and other major industrialised economies. Using the DEA technique, this paper argues that the key to sustainability rests on the operational efficiency of the players. Primary data for this study has been collected from STP Kolkata for a period of 15 years. The results reveal that (technical) efficiency varies across industry segments and increases with greater global orientation of the unit. The study prescribes segment-specific policies for sustainability of the industry instead of a uniform policy that has been the usual practice.

In its purest form, DEA measures relative efficiencies of decision making units (DMUs) using multiple inputs in order to produce multiple outputs. These DMUs must be homogeneous entities in the sense that they must use the same set of resources for producing their output. For obvious reasons, proper identification of the inputs and outputs is crucial before incorporating DEA. The inputs must take into consideration all the resources that influence the output. On the other hand, the outputs must reflect all the possible outcomes that can be used to assess the efficiency of each DMU (Thanassoulis, 2001). When we talk of relative efficiencies, it implies that these efficiencies are compared with the efficient DMU (or DMUs). In our case, these DMUs are the firms that operate in the industry. The novelty of the DEA technique is that it enables us to measure the efficiencies of the DMUs without any information regarding the product and input prices. This form of efficiency in the terminology of the DEA literature is known as “technical efficiency”. Depending on whether output augmentation or input conservation is more important, two related measures of technical efficiency have been devised, namely technical output efficiency and technical input efficiency. The distinction between the two is illustrated in Fig. 1. It represents the simplest possible case wherein a single output is produced using a single input. The curve OF is the locus of maximum levels of output attainable from the given set of inputs. In other words, OF represents the efficient frontier. Given the frontier, DEA provides an efficiency score between zero and one, with a score of one assigned to those DMUs that are on the frontier. The DMUs that are on the frontier either produce maximum output given the input levels or use minimum inputs to produce given level of output. In the former case, a DMU is said to be “output efficient” and in the latter it is said to be “input efficient”.

This study attempts to estimate the efficiency of the IT-ITeS industry drawing from the firm-level data collected from STP Kolkata with a view to highlight the heterogeneity inherent in the Indian IT-ITeS industry. The validity of the generalisation of the findings of the study of firms at STP Kolkata to the Indian IT-ITeS industry as a whole may be questioned, given the differential sizes and the number of players observed at the two levels. However, in this study, we have attempted such generalisation on account of the similarity in industry dynamics observed at the two levels. The similarity stems from (a) unrivalled export-orientation (b) industry structure which is pyramidal; (c) the service offerings that encompass the entire value-chain of IT; and (d) the dominance of software development units since inception and the birth of the ITeS sector in 1999–2000. From the study the heterogeneity in the industry is apparent on two fronts. On the one hand, there are a few big players and a large number of smaller units. As a result, the industry remains highly concentrated, notwithstanding the entry of new players over the years. The big players are invariably involved in software development and due to the high switching costs involved in software development they tend to enjoy “repeat” clients. Their domination remains unabated since they tend to benefit from economies of scale and scope. On the other hand, the industry comprises a diverse set of firms with significant differences among its various segments. From the data obtained from STP Kolkata, the industry was classified into seven broad segments in accordance with the product or services being offered. From the analysis it appears that all these are different spheres of activities. The heterogeneity among them is such that they could be considered different industries altogether (Coward, 2002). Whereas, the software development (namely, software application, product development and embedded software) units continue to be leading foreign exchange earners, ITeS units like call centres and BPOs seem to provide ample employment opportunities, albeit lower compensation. Hence, there is a trade-off between higher foreign exchange earnings and higher employment generation. However, this inherent heterogeneity in the IT-ITeS industry has not been taken into account by the government or regulatory bodies while devising policies or measures to promote the industry, primarily due to paucity of granular data. The policy initiatives for the Indian IT-ITeS industry followed a structuralist model till the 1970s and a liberalised model thereafter, especially since 1984 with the initiation of the New Computer Policy (Heeks, 1996). Having realised the foreign exchange earning potential of the industry, the government began acting as a facilitator rather than a controller by the beginning of 1990s (Kapur, 2002). To curb infrastructural bottlenecks and enable offshore development of software and services, the government established software technology parks in 1991. Other measures included investing public money into building a high speed national telecommunications infrastructure, spreading the use of IT in government institutions, setting up venture capital funds and increased bank lending provisioning Indian firms to raise debt and equity in global capital markets, provisioning foreign institutional investment in Indian capital markets, increasing depreciation on computers and related accessories, and so on (Coward, 2002, Dutta, 2001, Kapur, 2002, Kapur and Ramamurti, 2001 and Patibandla et al., 2000). The launch of the STP scheme in 1991 was beneficial to the industry as it provided single window clearance for a diverse set of activities (Arora and Bagde, 2010 and Sarma and Krishna, 2010). However, there is no provision in the STP scheme to distinguish between big and small players and grant benefits in accordance with their size20 or to distinguish between a software development unit and a call centre for example, as long as the concerned unit fulfils the minimum export-obligation.21 As a result, the scheme has not been able to address this important (and neglected) issue of heterogeneity in the industry. The Indian ITeS industry has been successful in cementing its footprint in the global market with a plethora of products and services; it is critical for the policymakers to take note of the inherent heterogeneity of the industry and devise suitable policies. This has assumed importance in the present times, given that the slowdown of the US economy in particular and major industrialised economies in general, has led to a reduced volume of outsourcing. Added to this is the industry’s inability to penetrate newer geographies with considerable success, emerging competition from various low-cost destinations, wage inflation hitting the bottom-line growth, and exchange rate vulnerabilities resulting in uncertain export realisations. Segment-specific or size-specific policy is called for as this will instil competition and bring about all round development of the industry.