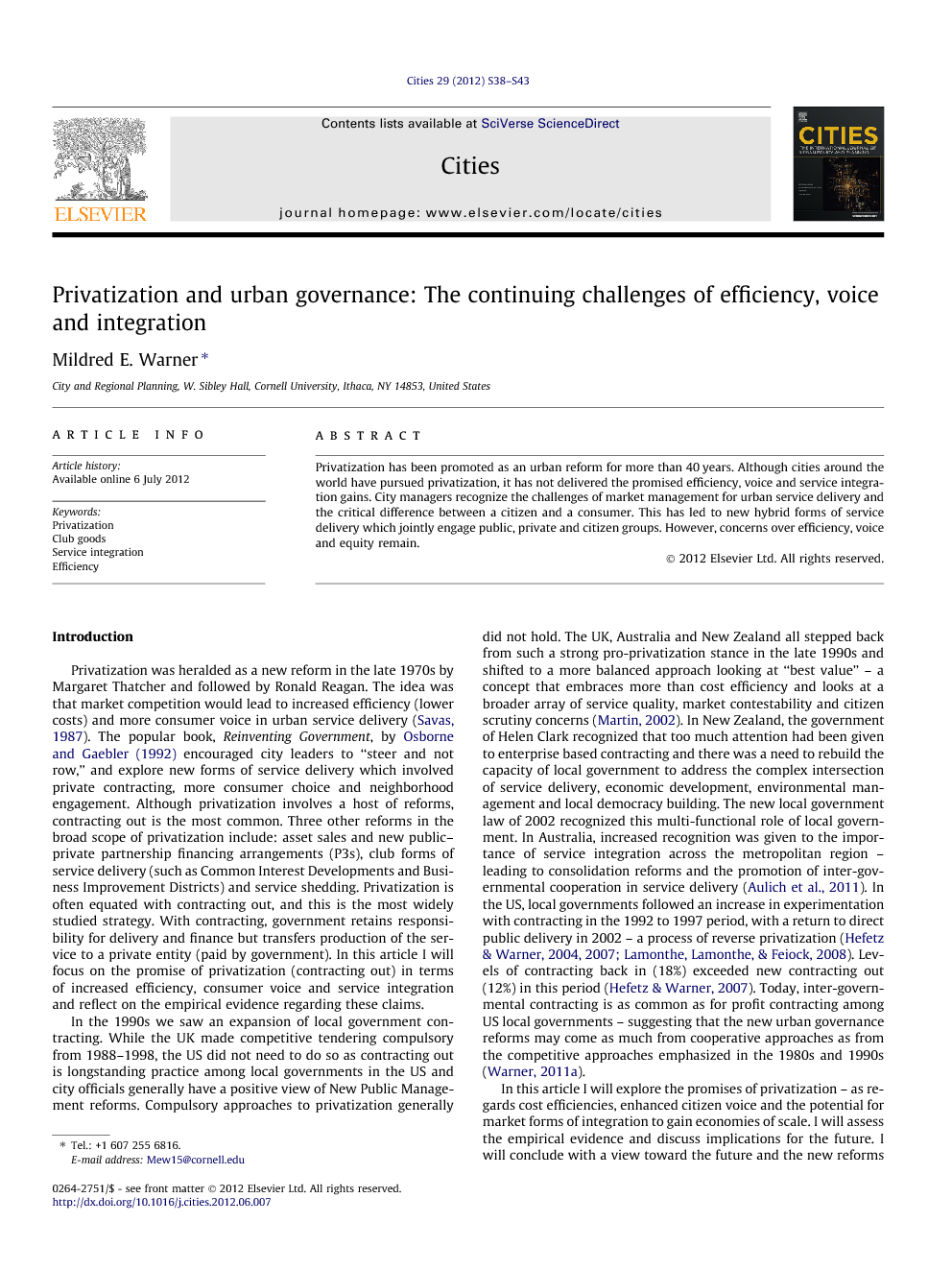 Privatization has been promoted as an urban reform for more than 40 years. Although cities around the world have pursued privatization, it has not delivered the promised efficiency, voice and service integration gains. City managers recognize the challenges of market management for urban service delivery and the critical difference between a citizen and a consumer. This has led to new hybrid forms of service delivery which jointly engage public, private and citizen groups. However, concerns over efficiency, voice and equity remain

Privatization was heralded as a new reform in the late 1970s by Margaret Thatcher and followed by Ronald Reagan. The idea was that market competition would lead to increased efficiency (lower costs) and more consumer voice in urban service delivery (Savas, 1987). The popular book, Reinventing Government, by Osborne and Gaebler (1992) encouraged city leaders to “steer and not row,” and explore new forms of service delivery which involved private contracting, more consumer choice and neighborhood engagement. Although privatization involves a host of reforms, contracting out is the most common. Three other reforms in the broad scope of privatization include: asset sales and new public–private partnership financing arrangements (P3s), club forms of service delivery (such as Common Interest Developments and Business Improvement Districts) and service shedding. Privatization is often equated with contracting out, and this is the most widely studied strategy. With contracting, government retains responsibility for delivery and finance but transfers production of the service to a private entity (paid by government). In this article I will focus on the promise of privatization (contracting out) in terms of increased efficiency, consumer voice and service integration and reflect on the empirical evidence regarding these claims. In the 1990s we saw an expansion of local government contracting. While the UK made competitive tendering compulsory from 1988–1998, the US did not need to do so as contracting out is longstanding practice among local governments in the US and city officials generally have a positive view of New Public Management reforms. Compulsory approaches to privatization generally did not hold. The UK, Australia and New Zealand all stepped back from such a strong pro-privatization stance in the late 1990s and shifted to a more balanced approach looking at “best value” – a concept that embraces more than cost efficiency and looks at a broader array of service quality, market contestability and citizen scrutiny concerns (Martin, 2002). In New Zealand, the government of Helen Clark recognized that too much attention had been given to enterprise based contracting and there was a need to rebuild the capacity of local government to address the complex intersection of service delivery, economic development, environmental management and local democracy building. The new local government law of 2002 recognized this multi-functional role of local government. In Australia, increased recognition was given to the importance of service integration across the metropolitan region – leading to consolidation reforms and the promotion of inter-governmental cooperation in service delivery (Aulich et al., 2011). In the US, local governments followed an increase in experimentation with contracting in the 1992 to 1997 period, with a return to direct public delivery in 2002 – a process of reverse privatization (Hefetz and Warner, 2004, Hefetz and Warner, 2007 and Lamonthe et al., 2008). Levels of contracting back in (18%) exceeded new contracting out (12%) in this period (Hefetz & Warner, 2007). Today, inter-governmental contracting is as common as for profit contracting among US local governments – suggesting that the new urban governance reforms may come as much from cooperative approaches as from the competitive approaches emphasized in the 1980s and 1990s (Warner, 2011a). In this article I will explore the promises of privatization – as regards cost efficiencies, enhanced citizen voice and the potential for market forms of integration to gain economies of scale. I will assess the empirical evidence and discuss implications for the future. I will conclude with a view toward the future and the new reforms – beyond contacting out – which are gaining interest among cities across the world.

This article has addressed recent research in privatization and urban governance. It has shown that the most common form of privatization, contracting out, has not delivered on its promises of cost efficiency. While it has increased the opportunity for consumer voice, there is a critical difference between consumer and citizen voice. Private markets segregate (by wealth, location, preference) whereas urban governments seek to integrate across the diversity of the city to create a more robust metropolitan region. Such efforts are often frustrated by a fragmented urban governance structure. Where this is the case, market approaches such as contracting to private firms or to other local governments, can help address coordination concerns. However government to government contracting appears to have more positive equity and voice effects than government to private sector contracts. This is explained in part by basic market principles - the imperative of private firms to earn a profit, the lack of competition and the broader set of objectives (access, equity, not just efficiency) of public managers. As city managers have experimented with privatization, they have learned about the high transactions costs of contracting, the challenges of market management and the critical difference between citizen and consumer voice. Future urban privatization reforms will bring even greater challenges to urban governance. The entrance of private international finance changes the power dynamics and opens urban infrastructure delivery to private financial interests which have different goals than city managers or private purveyors. The proliferation of private club approaches threatens to further fragment the city. Both trends will lead to more uneven service delivery across the metropolitan landscape. The challenge is to figure out how to harness new private initiative and investment without undermining the universal urban infrastructure ideal.