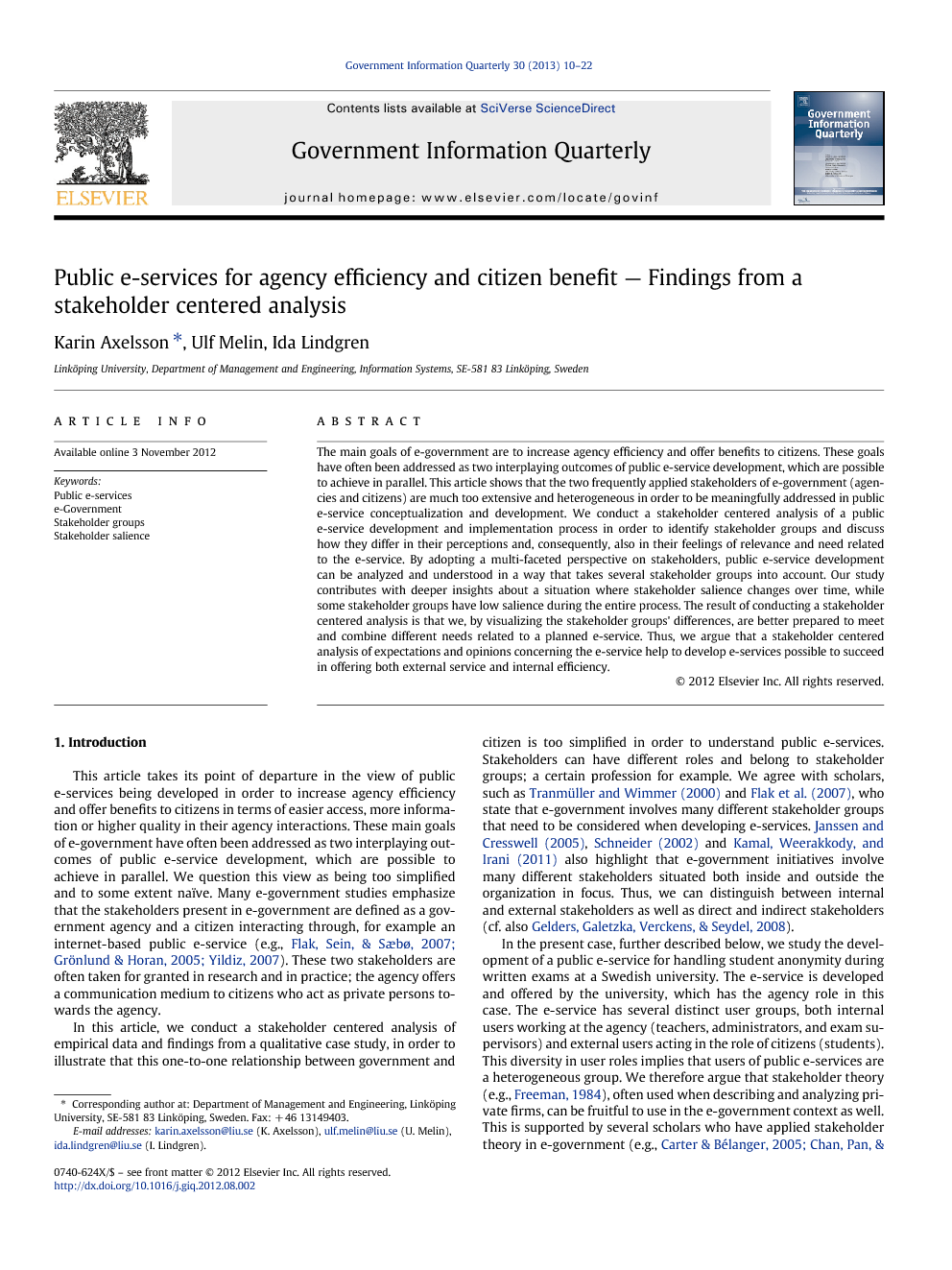 This article takes its point of departure in the view of public e-services being developed in order to increase agency efficiency and offer benefits to citizens in terms of easier access, more information or higher quality in their agency interactions. These main goals of e-government have often been addressed as two interplaying outcomes of public e-service development, which are possible to achieve in parallel. We question this view as being too simplified and to some extent naïve. Many e-government studies emphasize that the stakeholders present in e-government are defined as a government agency and a citizen interacting through, for example an internet-based public e-service (e.g., Flak et al., 2007, Grönlund and Horan, 2005 and Yildiz, 2007). These two stakeholders are often taken for granted in research and in practice; the agency offers a communication medium to citizens who act as private persons towards the agency. In this article, we conduct a stakeholder centered analysis of empirical data and findings from a qualitative case study, in order to illustrate that this one-to-one relationship between government and citizen is too simplified in order to understand public e-services. Stakeholders can have different roles and belong to stakeholder groups; a certain profession for example. We agree with scholars, such as Tranmüller and Wimmer (2000) and Flak et al. (2007), who state that e-government involves many different stakeholder groups that need to be considered when developing e-services. Janssen and Cresswell (2005), Schneider (2002) and Kamal, Weerakkody, and Irani (2011) also highlight that e-government initiatives involve many different stakeholders situated both inside and outside the organization in focus. Thus, we can distinguish between internal and external stakeholders as well as direct and indirect stakeholders (cf. also Gelders, Galetzka, Verckens, & Seydel, 2008). In the present case, further described below, we study the development of a public e-service for handling student anonymity during written exams at a Swedish university. The e-service is developed and offered by the university, which has the agency role in this case. The e-service has several distinct user groups, both internal users working at the agency (teachers, administrators, and exam supervisors) and external users acting in the role of citizens (students). This diversity in user roles implies that users of public e-services are a heterogeneous group. We therefore argue that stakeholder theory (e.g., Freeman, 1984), often used when describing and analyzing private firms, can be fruitful to use in the e-government context as well. This is supported by several scholars who have applied stakeholder theory in e-government (e.g., Carter and Bélanger, 2005, Chan et al., 2003, Flak and Nordheim, 2006, Flak and Rose, 2005, Pardo and Scholl, 2002, Sæbø et al., 2011 and Scholl, 2001). Our analysis is based on two theoretical models. We use the typology by Mitchell, Agle, and Wood (1997), introduced in the next section, which explains how stakeholders' salience depends on their differing degree of power, legitimacy and urgency. By using this typology we are able to analyze e-government stakeholders' salience with our case as a point of departure. Our second theoretical analysis model is a conceptualization of e-government entities by Sæbø et al. (2011), who further developed the entities from Flak et al. (2007). The e-government entities model, introduced in the next section, is proposed as a way to contextualize stakeholders in e-government in a more detailed way than just distinguishing between government and citizens Sæbø et al. (2011). Thus, by applying the e-government entities model we get a more fine-grained conceptualization of e-government stakeholders. Sæbø et al. (2011) have developed the entities from a national government agency perspective. In their article, Sæbø et al. (2011) unpack the concept of stakeholder salience, and we relate to this on-going discussion by elaborating on how this conceptualization informs our case when we apply the concepts on a local level of e-government. We discuss how identified stakeholders differ in opinions and expectations regarding a public e-service, as well as in what way their activities are affected by the e-service, and relate these findings to the notion of stakeholder salience. We argue that this conceptualization can be useful in the future development of more comprehensive and successful e-services. Such e-services might succeed to balance the two main e-government objectives; reaching both agency efficiency and citizen benefits. The research question we focus on in this article is what insights we can gain from identifying involved e-government stakeholders in more detail than just distinguishing between agencies and citizens. We use empirical illustrations from the studied e-service development and implementation process in order to identify stakeholder groups and to discuss how they differ in their perceptions and consequently also in their feelings of relevance and need related to the e-service. Following this line of argument, the purpose of the article is to show that the two most frequently used stakeholders of e-government (agencies and citizens) are much too extensive and heterogeneous to address, in order to reach the commonly anticipated win–win situation, with increased quality for citizens and increased efficiency for agencies. By presenting this diversity in opinions we add further understanding to the notion of e-services as being more or less beneficial for certain stakeholders. By adopting a multi-faceted perspective on stakeholders, public e-service development can be analyzed and understood in a way that takes several stakeholder groups into account. Our approach is supported by studies of Flak and Nordheim (2006) and Sæbø et al. (2011) which indicate that few e-government studies so far have explicitly addressed the stakeholder complexity and its inherent challenges. After this introduction, the article is organized in the following way: in Section 2 we discuss the theoretical concept of stakeholders in e-government. The case is described in Section 3 followed by the research design in Section 4. The empirical findings from our case study are presented in Section 5. In Section 6 the findings are analyzed and discussed. The article is concluded in Section 7, in which we also make some statements about the need for further research efforts in this area.