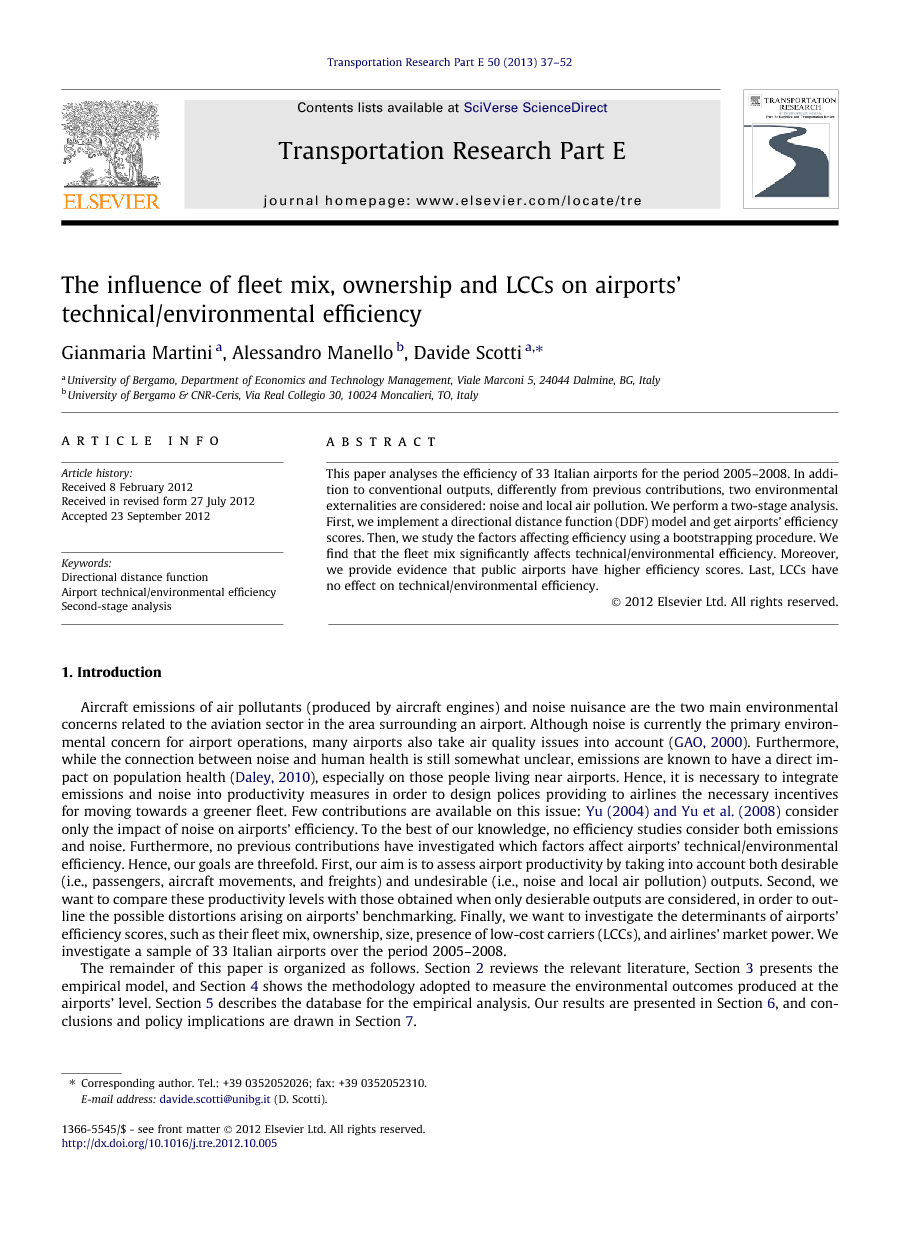 This paper analyses the efficiency of 33 Italian airports for the period 2005–2008. In addition to conventional outputs, differently from previous contributions, two environmental externalities are considered: noise and local air pollution. We perform a two-stage analysis. First, we implement a directional distance function (DDF) model and get airports’ efficiency scores. Then, we study the factors affecting efficiency using a bootstrapping procedure. We find that the fleet mix significantly affects technical/environmental efficiency. Moreover, we provide evidence that public airports have higher efficiency scores. Last, LCCs have no effect on technical/environmental efficiency.

Aircraft emissions of air pollutants (produced by aircraft engines) and noise nuisance are the two main environmental concerns related to the aviation sector in the area surrounding an airport. Although noise is currently the primary environmental concern for airport operations, many airports also take air quality issues into account (GAO, 2000). Furthermore, while the connection between noise and human health is still somewhat unclear, emissions are known to have a direct impact on population health (Daley, 2010), especially on those people living near airports. Hence, it is necessary to integrate emissions and noise into productivity measures in order to design polices providing to airlines the necessary incentives for moving towards a greener fleet. Few contributions are available on this issue: Yu, 2004 and Yu et al., 2008 consider only the impact of noise on airports’ efficiency. To the best of our knowledge, no efficiency studies consider both emissions and noise. Furthermore, no previous contributions have investigated which factors affect airports’ technical/environmental efficiency. Hence, our goals are threefold. First, our aim is to assess airport productivity by taking into account both desirable (i.e., passengers, aircraft movements, and freights) and undesirable (i.e., noise and local air pollution) outputs. Second, we want to compare these productivity levels with those obtained when only desierable outputs are considered, in order to outline the possible distortions arising on airports’ benchmarking. Finally, we want to investigate the determinants of airports’ efficiency scores, such as their fleet mix, ownership, size, presence of low-cost carriers (LCCs), and airlines’ market power. We investigate a sample of 33 Italian airports over the period 2005–2008. The remainder of this paper is organized as follows. Section 2 reviews the relevant literature, Section 3 presents the empirical model, and Section 4 shows the methodology adopted to measure the environmental outcomes produced at the airports’ level. Section 5 describes the database for the empirical analysis. Our results are presented in Section 6, and conclusions and policy implications are drawn in Section 7.

In this paper, a DDF approach for airports’ efficiency assessment considering both desirable and undesirable outputs has been applied to a sample of 33 Italian airports for the period 2005–2008. Undesirable outputs are local air pollution and noise annoyance. Furthermore, we investigate the factors influencing the technical/environmental efficiency using the Simar and Wilson bootstrapping approach in a second-stage analysis. The contributions of this paper to the literature are the following ones. To the best of our knowledge, this is the first paper assessing airport technical/environmental efficiency taking into account both local air pollution and noise. Furthermore, we identify some aeronautical (fleet mix and LCC) and non-aeronautical (airport ownership) determinants of efficiency allowing us to highlight some interesting insights yielding relevant policy implications for air transportation and its impact on environment. First, we provide some empirical evidence that the fleet mix is a key factor for airport technical/environmental efficiency. Specifically, we find that airports are more efficient the lower the percentage of flights operated with narrow-body aircrafts. This suggests that improvements in technical/environmental efficiency might be obtained by inducing airlines to substitute narrow-bodies with regional jets when the route load factors using narrow-bodies are rather low. Under the latter circumstances substitution is possible without increasing the number of aircraft movements. However, even when substitution is not feasible, airlines operating more polluting and empty flights should be penalized for the higher per-passenger damage they produce. As a policy implication, airports should provide incentives for airlines to operate short haul flights with greener aircrafts through airport charges covering both noise and pollution and inversely related to the load factor. Policy makers could alternatively provide an incentive scheme that rewards the greenest airports: such incentives could then be shared between the airport and the airlines that have contributed to the objective. Second, we find that the higher the stake of public local authorities in the airports’ ownership structure, the higher is their technical/environmental efficiency. No previous contributions investigate this issue since they mainly focus on technical efficiency without considering airport externalities. It is not surprising that local authorities may be more sensible to problems related to noise and local air pollution, since they affect their voters. This may be an argument mitigating the privatization of airports. Third, with regard to the influence of airlines on airport efficiency, the presence of low-cost carriers is not significant from the environmental point of view. This result is interesting since it is in contrast with a possible common perception that LCCs, using modern aircraft, are more environmentally friendly than other airlines. However, to best of our knowledge, this is the first contribution showing that low-cost carriers have a positive impact on airports’ technical efficiency as long as they do not get excessive levels of dominance. Our analysis can be extended in several ways. First, in order to identify a technical/environmental frontier, it is possible to explore different directions for improvements in the first-stage analysis, and to see their effects on the estimated scores. Second, further countries may be added to the data set, to investigate whether country effects may be relevant both in assessing efficiency and in the sign and magnitude of its determinants. Last, we have measured the noise and pollution levels produced by airport, and not their effects on the population. These issues are left for future research.