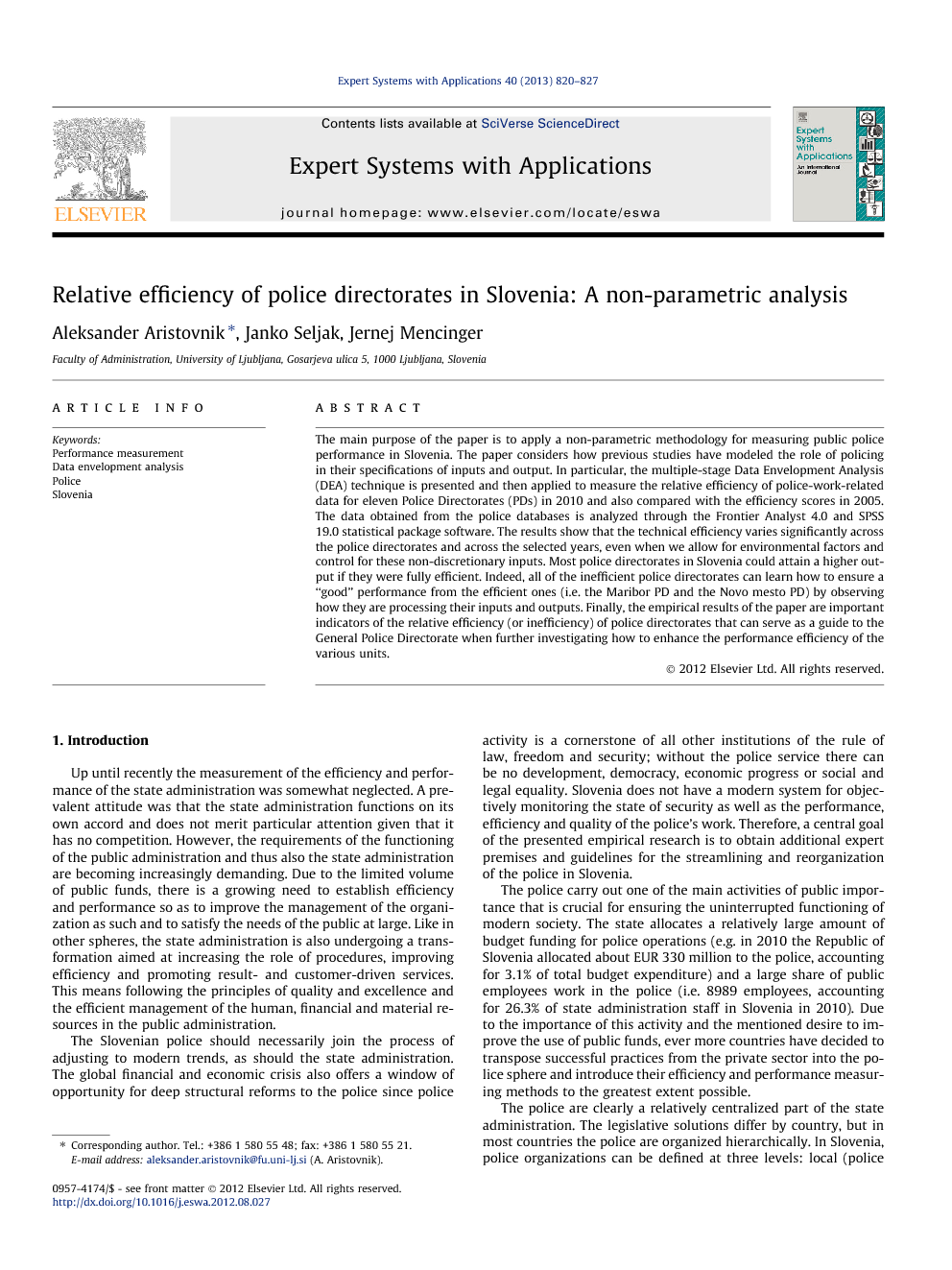 The main purpose of the paper is to apply a non-parametric methodology for measuring public police performance in Slovenia. The paper considers how previous studies have modeled the role of policing in their specifications of inputs and output. In particular, the multiple-stage Data Envelopment Analysis (DEA) technique is presented and then applied to measure the relative efficiency of police-work-related data for eleven Police Directorates (PDs) in 2010 and also compared with the efficiency scores in 2005. The data obtained from the police databases is analyzed through the Frontier Analyst 4.0 and SPSS 19.0 statistical package software. The results show that the technical efficiency varies significantly across the police directorates and across the selected years, even when we allow for environmental factors and control for these non-discretionary inputs. Most police directorates in Slovenia could attain a higher output if they were fully efficient. Indeed, all of the inefficient police directorates can learn how to ensure a “good” performance from the efficient ones (i.e. the Maribor PD and the Novo mesto PD) by observing how they are processing their inputs and outputs. Finally, the empirical results of the paper are important indicators of the relative efficiency (or inefficiency) of police directorates that can serve as a guide to the General Police Directorate when further investigating how to enhance the performance efficiency of the various units.

This paper gave an account of the application of a non-parametric methodology to the assessment of police performance in Slovenia. We employed a three-stage DEA procedure to evaluate the efficiency of Slovenian police directorates in 2010 and compare it with 2005. We found significant differences in the efficiency scores and that most police directorates in Slovenia are technically inefficient. Indeed, the empirical results show that between 6 to 7 police directorates (out of 11) (it depends on the core police activity) are inefficient relative to their peers. This suggests there are opportunities for an output increase by augmenting the observed police outputs. Two police directorates, i.e. the Maribor PD and the Novo mesto PD, are rated the most efficient in terms of technical efficiency for all three selected core police activities in 2010 using police statistical data and can therefore serve as a good benchmark. Further, we also showed that police directorates can be investigated in terms of their relative efficiency according to the time dimension. When comparing 2005 and 2010, the efficiency score rankings reveal relatively wide variations among the considered police directorates and their core activities. For instance, the same police directorate (the Celje PD) reveals a significant efficiency improvement in the area of public order and simultaneously a substantial deterioration in the area of crime prevention, detection and investigation. In general, the biggest increase (decrease) of average efficiency rankings of all three core police activities was noticed in the Krško PD (Celje PD), particularly due to efficiency variations for crime prevention, detection and investigation activities in the period under study. Moreover, our empirical analysis indicates that differences in operating environments and socio-economic factors do have a significant influence on the efficiency of police directorates in Slovenia. Finally, we must point out a few notes of caution. Firstly, our empirical research mainly focuses on quantitative dimensions of outputs and inputs. However, there are additional important qualitative dimensions of outputs that were not taken into account; for example, the quality of police work and police officers. It would be desirable to treat these outputs explicitly in our models. Secondly, the three-stage DEA analysis does not enable a direct comparison of performances in the core police activities. However, the calculated average efficiency scores offer aggregate information on the average performance in all three areas. Further, application of the presented technique is hampered by a lack of suitable data and the precise definition of the inputs and outputs, which may influence the empirical results significantly. Last but not least, it is important to note that our findings are important indicators of relative efficiency (or inefficiency), which can serve as a guide for the General Police Directorate when further investigating how to enhance the performance efficiency of its units.