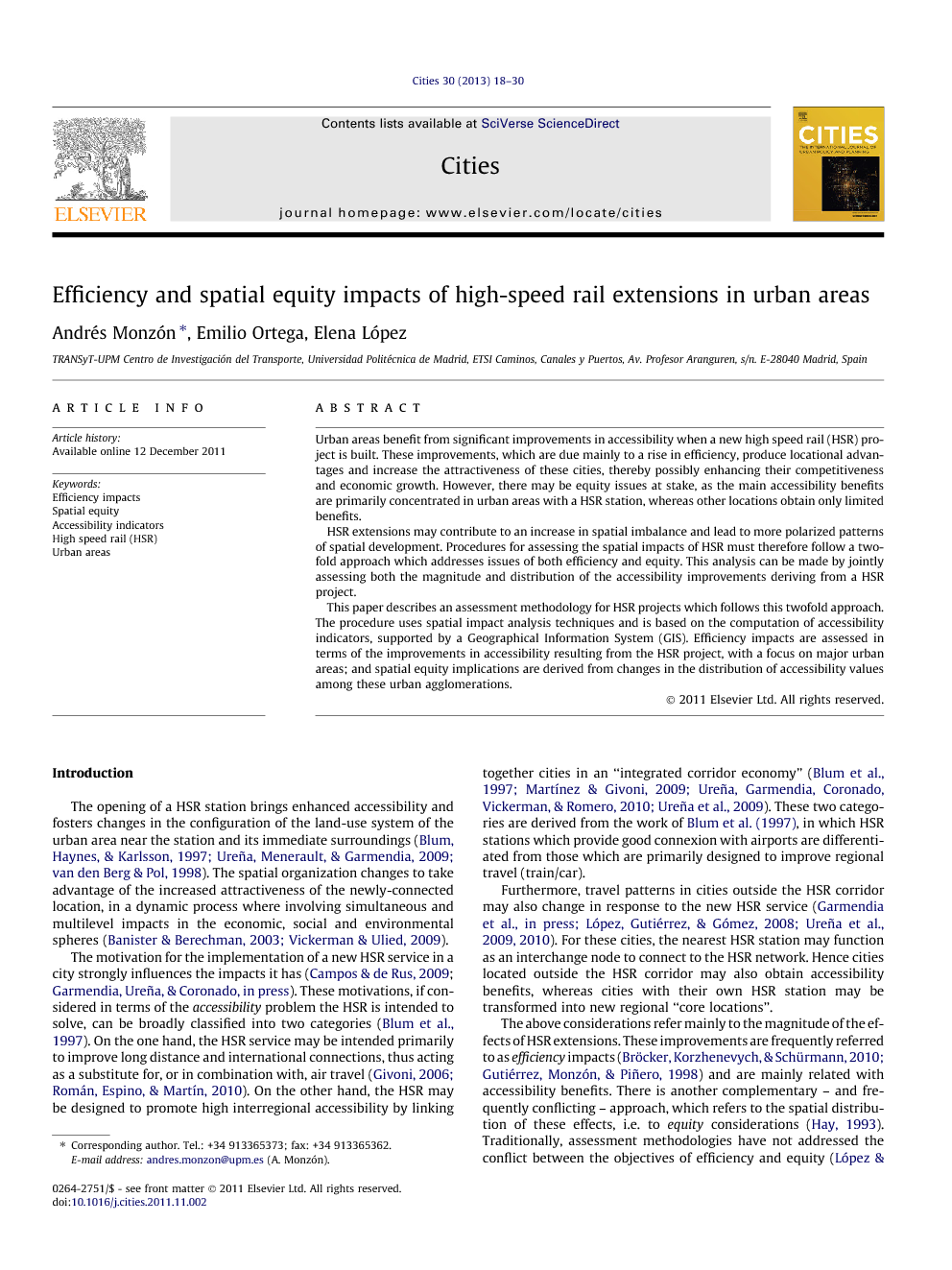 Urban areas benefit from significant improvements in accessibility when a new high speed rail (HSR) project is built. These improvements, which are due mainly to a rise in efficiency, produce locational advantages and increase the attractiveness of these cities, thereby possibly enhancing their competitiveness and economic growth. However, there may be equity issues at stake, as the main accessibility benefits are primarily concentrated in urban areas with a HSR station, whereas other locations obtain only limited benefits. HSR extensions may contribute to an increase in spatial imbalance and lead to more polarized patterns of spatial development. Procedures for assessing the spatial impacts of HSR must therefore follow a twofold approach which addresses issues of both efficiency and equity. This analysis can be made by jointly assessing both the magnitude and distribution of the accessibility improvements deriving from a HSR project. This paper describes an assessment methodology for HSR projects which follows this twofold approach. The procedure uses spatial impact analysis techniques and is based on the computation of accessibility indicators, supported by a Geographical Information System (GIS). Efficiency impacts are assessed in terms of the improvements in accessibility resulting from the HSR project, with a focus on major urban areas; and spatial equity implications are derived from changes in the distribution of accessibility values among these urban agglomerations.

The opening of a HSR station brings enhanced accessibility and fosters changes in the configuration of the land-use system of the urban area near the station and its immediate surroundings (Blum et al., 1997, Ureña et al., 2009 and van den Berg and Pol, 1998). The spatial organization changes to take advantage of the increased attractiveness of the newly-connected location, in a dynamic process where involving simultaneous and multilevel impacts in the economic, social and environmental spheres (Banister and Berechman, 2003 and Vickerman and Ulied, 2009). The motivation for the implementation of a new HSR service in a city strongly influences the impacts it has (Campos & de Rus, 2009; Garmendia, Ureña, & Coronado, in press). These motivations, if considered in terms of the accessibility problem the HSR is intended to solve, can be broadly classified into two categories (Blum et al., 1997). On the one hand, the HSR service may be intended primarily to improve long distance and international connections, thus acting as a substitute for, or in combination with, air travel ( Givoni, 2006 and Román et al., 2010). On the other hand, the HSR may be designed to promote high interregional accessibility by linking together cities in an “integrated corridor economy” ( Blum et al., 1997, Martínez and Givoni, 2009, Ureña et al., 2010 and Ureña et al., 2009). These two categories are derived from the work of Blum et al. (1997), in which HSR stations which provide good connexion with airports are differentiated from those which are primarily designed to improve regional travel (train/car). Furthermore, travel patterns in cities outside the HSR corridor may also change in response to the new HSR service (Garmendia et al., in press, López et al., 2008, Ureña et al., 2009 and Ureña et al., 2010). For these cities, the nearest HSR station may function as an interchange node to connect to the HSR network. Hence cities located outside the HSR corridor may also obtain accessibility benefits, whereas cities with their own HSR station may be transformed into new regional “core locations”. The above considerations refer mainly to the magnitude of the effects of HSR extensions. These improvements are frequently referred to as efficiency impacts ( Bröcker et al., 2010 and Gutiérrez et al., 1998) and are mainly related with accessibility benefits. There is another complementary – and frequently conflicting – approach, which refers to the spatial distribution of these effects, i.e. to equity considerations (Hay, 1993). Traditionally, assessment methodologies have not addressed the conflict between the objectives of efficiency and equity ( López and Monzón, 2010 and Martínez and Givoni, 2009). Efficiency objectives in isolation would lead to a HSR network whose aim is to provide an efficient link between major economic activity centres. However, this strategy would have a negative impact on equity, as it would lead to more polarized patterns of spatial development: richer cities are likely to gain more, while disadvantaged cities would end up in a comparatively worse situation ( Martin, 1997, Martínez and Givoni, 2009 and Puga, 2002). These equity considerations, related with concepts such as cohesion, polycentricity and peripherality, are gaining ground in European transport and regional policy documents (Bröcker et al., 2010, EC, 1999, Peters, 2003 and Vickerman et al., 1999). It is therefore increasingly being claimed that the design of a HSR network may need to be modified to ensure that both an acceptable degree of equity is retained, while maximizing economic growth (Bröcker et al., 2010, Button, 1993 and López and Monzón, 2010). This design will require changes in local and regional secondary transport networks in order to improve the connection of cities without a HSR station to the HSR service (EC, 1999). Accessibility analysis is increasingly being used as a support tool when planning HSR extensions (Bröcker et al., 2010, Gutiérrez, 2001 and Gutiérrez et al., 1996), given its proven capacity to address both efficiency and equity issues (López et al., 2008 and Martín et al., 2004). Accessibility measures are capable of gauging the achievement of efficiency objectives, as they make it possible to assess improvements in network efficiency (Gutiérrez et al., 1998). They can also determine how transport and development impacts are distributed across geographical areas and population groups, thus combining the objectives of compatibility and equity (Talen, 1998 and Talen and Anselin, 1996). In this context, the present paper contributes to the existing literature by proposing a methodology to assess both the equity and efficiency implications of HSR projects. The structure of the paper is as follows: the section after this introduction defines various general concepts of efficiency and equity, and outlines current attempts to measure equity impacts through accessibility analysis. The third section describes the proposed methodology, which is subsequently applied in a fourth section to a case study of a HSR extension in Spain. The fifth and final section contains the discussion and recommendations for future research directions.

The planning process for HSR extensions must include – as crucial elements of the decision-making process – consideration of both network efficiency and spatial equity issues (Bröcker et al., 2010; Puga, 2002). If HSR extensions are prioritized solely according to network efficiency objectives, their design will strongly depend on the extent to which HSR efficiently links major urban agglomerations. This approach implies a serious risk of creating the effect of spatial polarization, i.e. a negative impact on spatial equity (López et al., 2008). The spatial equity approach involves adopting a more strategic view, which addresses both the possible benefits and their spatial distribution. This requires an assessment of the effects not only on the cities in the HSR corridors with a HSR station, but also on other cities outside the corridor, regardless of whether or not they have a HSR station. This paper presents a methodology designed to fill this research gap, based on an accessibility analysis approach. The application of the procedure to the case study of the extension of the Spanish HSR network has provided evidence of both efficiency and spatial equity impacts. The analysis is based on the comparison of the ranking of Spanish cities before and after the extension of the HSR network. The risk of spatial polarization posed by HSR can clearly be seen in the Spanish case study. After the HSR extension, higher accessibility values are concentrated in the surroundings of HSR stations such as Madrid, Valencia and Barcelona (see Fig. 5). The presence of HSR stations causes the existence of “islands” with enhanced levels of accessibility, and shadow areas in isolated locations – i.e. the “tunnel effect” (Plassard, 1991). The size of these “islands” depends on the quality of the transport network from the surrounding cities to the nearest HSR station. In addition, the research reveals that both the accessibility of each city in the initial situation and its geographical position are two important drivers of their potential to gain relative accessibility benefits. On the one hand, the Spanish results show that cities with a poorer initial situation concentrate the highest percentage of accessibility improvements, as is the case of the peripheral cities in the north and south of the peninsula which obtain percentage improvements considerably in excess of 60%, such as Santander (99%), Oviedo (82%), Almería (84%) and Malaga (84%). On the other hand, cities with good railway connections in their initial situation and which are near large population centres obtain limited benefits. This is the case of cities such as Madrid (24%), Valencia (36%) and Alicante (23%), located in corridors connecting large Spanish cities and whose accessibility levels are already acceptable before the HSR extension. Globally, the final situation is ultimately more equitable than before. When a HSR extension is designed to cover the territory homogeneously, it can be expected to lead to a positive effect on spatial equity. This is the case of the Spanish HSR extension, which involves a spatially-balanced distribution of HSR stations throughout the Spanish mainland. Indeed, results show that the HSR extension causes a global rise in territorial equity; the CV value decreases by 23.1%. However, it should be noted that specific inequity effects appear with the HSR extension. This is the case of cities where the difference in their accessibility values increases with regard to the average value, such as Badajoz and Cuenca; or cities whose accessibility value does not come near the average values, such as Madrid. Some of these conclusions are relevant for application to HSR planning procedures. This research work highlights various important factors that must be considered in the planning process, including: the level of accessibility of the city in the initial situation as regards the quality of its railway infrastructures; its geographical position in terms of proximity to major population centres; the existence of a HSR station; and the quality of the transport network from the cities to the nearest HSR station. These factors need to be addressed at the planning stage in order to obtain maximum positive spatial equity impacts. The Spanish HSR Masterplan will unquestionably bring significant benefits to areas all over the Spanish mainland. However its radial structure design does not allow any changes to the accessibility map in relative terms (see Fig. 4 and Fig. 5). If equity had been the main driver of this plan, more transversal connections should have been included. In summary, it is clearly an improvement over the previous situation, but does not alter the existing differences and the dominant positions of certain cities. This paper contributes to this field of research by proposing a methodology that addresses issues of both efficiency and spatial equity using an accessibility approach. We believe the method proposed in this paper represents a valuable instrument for the decision-making process at strategic levels. It is precisely in these large-scale transport projects where the inclusion of efficiency and equity effects are increasingly in demand by policy makers (Bröcker et al., 2010; López & Monzón, 2010). Finally, an interesting research avenue stemming from this paper is the definition of a procedure to integrate these results into a CBA or MCA framework. This could be done by monetarising efficiency and equity effects, or by defining their weight when compared to other criteria.