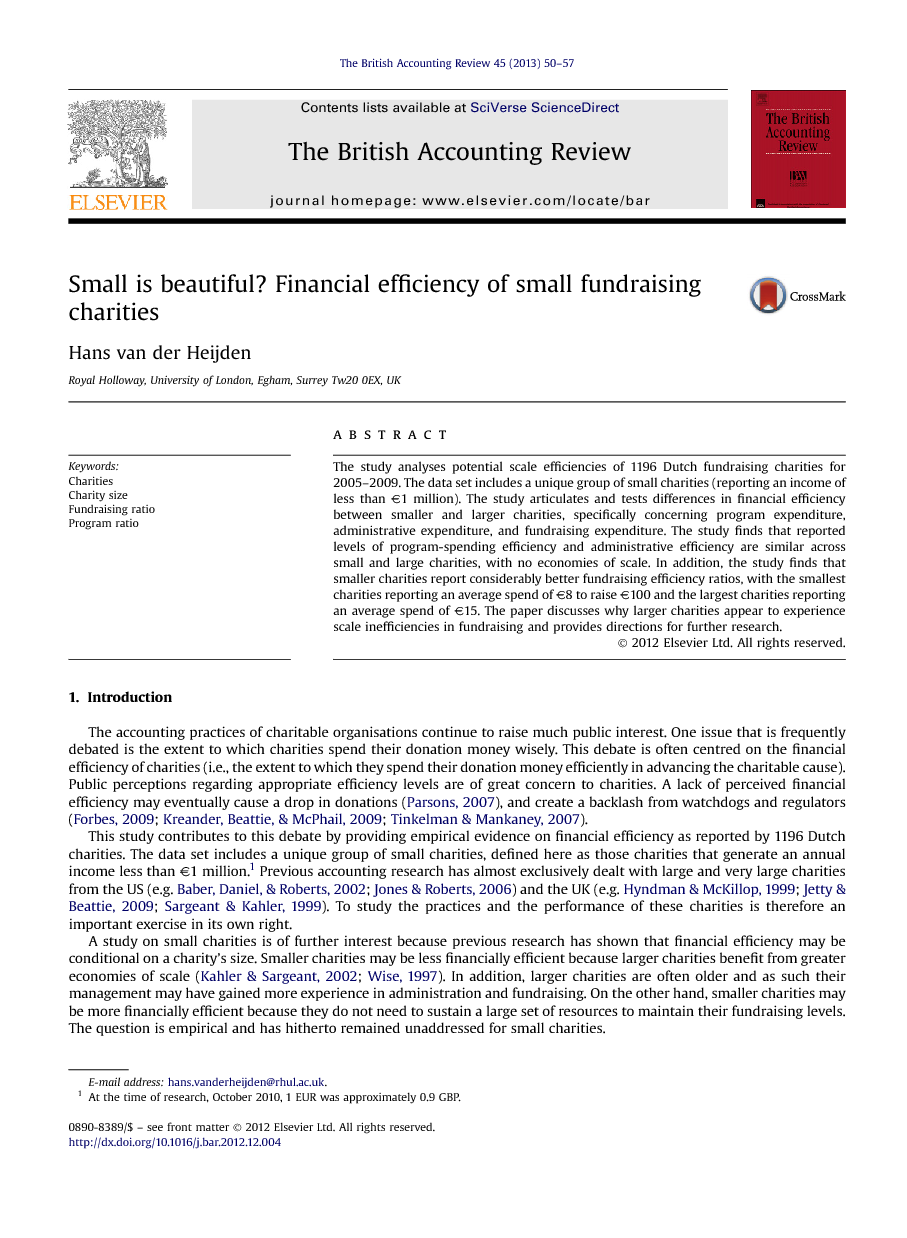 The accounting practices of charitable organisations continue to raise much public interest. One issue that is frequently debated is the extent to which charities spend their donation money wisely. This debate is often centred on the financial efficiency of charities (i.e., the extent to which they spend their donation money efficiently in advancing the charitable cause). Public perceptions regarding appropriate efficiency levels are of great concern to charities. A lack of perceived financial efficiency may eventually cause a drop in donations (Parsons, 2007), and create a backlash from watchdogs and regulators (Forbes, 2009; Kreander, Beattie, & McPhail, 2009; Tinkelman & Mankaney, 2007). This study contributes to this debate by providing empirical evidence on financial efficiency as reported by 1196 Dutch charities. The data set includes a unique group of small charities, defined here as those charities that generate an annual income less than €1 million.1 Previous accounting research has almost exclusively dealt with large and very large charities from the US (e.g. Baber, Daniel, & Roberts, 2002; Jones & Roberts, 2006) and the UK (e.g. Hyndman & McKillop, 1999; Jetty & Beattie, 2009; Sargeant & Kahler, 1999). To study the practices and the performance of these charities is therefore an important exercise in its own right. A study on small charities is of further interest because previous research has shown that financial efficiency may be conditional on a charity's size. Smaller charities may be less financially efficient because larger charities benefit from greater economies of scale (Kahler & Sargeant, 2002; Wise, 1997). In addition, larger charities are often older and as such their management may have gained more experience in administration and fundraising. On the other hand, smaller charities may be more financially efficient because they do not need to sustain a large set of resources to maintain their fundraising levels. The question is empirical and has hitherto remained unaddressed for small charities. To compare the financial efficiency of the different charities, this study examines and compares three sector-specific financial ratios as a function of varying size, using data taken from the charities' annual accounts (an approach in line with e.g. Hyndman & McKillop, 1999). An example of such a ratio is the fundraising ratio: the expenses spent on the generation of funds as a percentage of the amount of funds eventually raised. It must be emphasised, following Hyndman and McKillop (1999) and others, that these ratios are subject to a degree of accounting discretion regarding cost definition and cost classification. In addition, the ratios measure a narrow definition of financial efficiency. Their interpretation should, therefore, not be confused with more liberal interpretations of efficiency, or with judgements regarding the effectiveness of the charity. Efficiency is defined here as the relationship between certain inputs (such as income) and certain outputs (such as expenses). Effectiveness refers to the relationship between those outputs and actual performance. Efficiency is therefore not necessarily connected to the effectiveness of the charity. For example, charities may exhibit very high levels of administrative efficiency, but at the same time suffer from inadequate donor registration or poorly administered fundraising campaigns.2 The study is set against the backdrop of the voluntary sector in the Netherlands, a sector that is relatively large in size in comparison to other countries (see Burger & Veldheer, 2001; for an overview of the origins and growth of the Dutch voluntary sector). The Dutch are active volunteers in charitable activities. In 2009, at least 40% of the population was engaged as a volunteer in unpaid work (Schuyt, Gouwenberg, & Bekkers, 2011). The paper studies scale efficiencies of charities by examining the annual accounts of 1196 Dutch fundraising charities for 2005–2009. These accounts are available to the general public through the website of the Dutch accreditation body for fundraising charities, the Central Bureau for Fundraising (CBF). The paper proceeds as follows. First, a brief review of the financial ratios under study is given, followed by hypothesis development regarding the levels of these ratios for smaller charities. Second, the Method section discusses the data set in more detail. The Results section provides the findings of the study. The paper concludes with a discussion of the results and implications for research and practice.

This study sought to examine the levels of financial efficiency of smaller charities as compared to their larger counterparts, in order to detect scale advantages or disadvantages. The findings with respect to the three hypotheses are as follows. First, there is no statistical difference in the reported level of program spending between smaller charities and larger charities. Hypothesis 1 is therefore rejected. Second, smaller charities are, on average, reporting slightly better levels of administrative efficiency than bigger charities, although the strength of correlation is weak. Hypothesis 2 is therefore also rejected, because the hypothesis stated the relationship in the opposite direction. Third, there is a statistical difference in the efficiency of fundraising activities of charities, with smaller charities reporting better levels of fundraising efficiency. The smallest charities spend on average €8 to raise €100, whereas the largest charities spend on average €15. Hypothesis 3 is therefore supported. A discussion of each of the findings follows. Charity size and program ratio do not appear to be correlated. The program ratio ranges between 82% and 88% and appears to be stable across all charities, irrespective of size or sector. This implies that economies of scale do not appear to materialise, or at least these economies do not show up in this ratio. It is conceivable that a sample self-selection bias plays a role, in the sense that only those charities with favourable program ratios have an incentive to submit their accounts to CBF. It is also worth drawing attention to the higher variability in the ratio for smaller charities, indicating that program ratios of smaller charities fluctuate much more widely around the accreditation benchmark than larger charities. The paper has not taken this increased variability into account and it would appear that further research into its practical significance is required. With respect to the second ratio, ACE, the study found statistical evidence for a weak positive relationship between size and the administrative expenditure. Looking at the modest strength of the relationship, however, it is difficult to justify that the difference is practically significant. The finding accords with some earlier research (Wise, 1997) but not with later research (Kahler & Sargeant, 2002). One explanation for this finding is that a correlation this weak may go undetected in different samples. A second explanation is that the result may only hold for specific types of charities such as churches and museums. Another plausible explanation is that the tests pick up a weak correlation (positive or negative) where in fact there is none. Lastly the study found positive relationships between charity size and the reported fundraising ratio. This result is consistent with Hyndman and McKillop's (1999) study, and implies that there are considerable scale disadvantages in fundraising. These scale disadvantages suggest a law of diminishing returns, where fundraising activities become increasingly more costly as the charity grows. With respect to fundraising costs, scale disadvantages (e.g., a need to purchase services rather than have them donated, a need to spend money to sustain a high profile) appear to trump scale advantages (e.g., increased donation levels due to reputation). The present study contributes to our knowledge in this area because the existence and strength of this relationship can now be extended to a much wider range of charities than was known and studied before. These findings are subject to qualifications regarding the sample studied in this paper. It has already been noted that the sample is not likely to be representative for all charities in the Netherlands, and that the accounts are likely to be of variable quality. The larger charities in the sample are likely to have a higher quality of accounts, due in part to their higher profile, access to qualified accountants, and supervision by external auditors. The smaller charities in the sample do not possess these safeguards and perhaps this generates opportunities for misreporting and misclassifying expenses. This would be consistent with research by Keating et al. (2008), who found that those charities most likely to misreport expenses are those that are smaller, less monitored, and have less accounting sophistication. It is difficult to judge the impact of this qualification on the findings. Further research is encouraged into the accounting practices of very small charities to establish whether some misreporting exists and whether it is widespread. Another interesting avenue for further research is related to the observation that larger fundraising charities select other sources of income as they grow. The findings show that fundraising income is more important for smaller charities than it is for larger charities. Larger charities, as part of their overall fundraising strategy, are more successful in raising funds through joint fundraising, third-party fundraising and government grants. It is possible that they turn to other sources of income as their return on fundraising begins to tail off. Certainly some examples of joint fundraising (for example, national fundraising telethons) are restricted to the larger charities only, especially because they are more likely to operate at the (inter-)national level. Further research is encouraged into the fundraising strategies of larger charities and the extent to which these other sources of income are identified as a response to, or in addition to traditional fundraising efforts. By definition larger charities are able to make larger amounts of funds available towards advancing the charitable cause. It is for this reason that many small charities have legitimate growth aspirations. The broader implication of this study, however, is that, strictly in terms of fundraising efficiency it does not necessarily pay off to be bigger. Abdy and Barclay (2001) provide some examples of the resourcefulness of small charities: local fetes, address list sharing, and joint participation in fundraising campaigns. The research shows how smaller charities use these fundraising opportunities to good effect. As small charities grow larger, many of them must come to terms with lower levels of fundraising efficiency: growth requires a proportionally higher investment in fundraising costs. Whether the general public is also ready to accept this reality remains an open question.