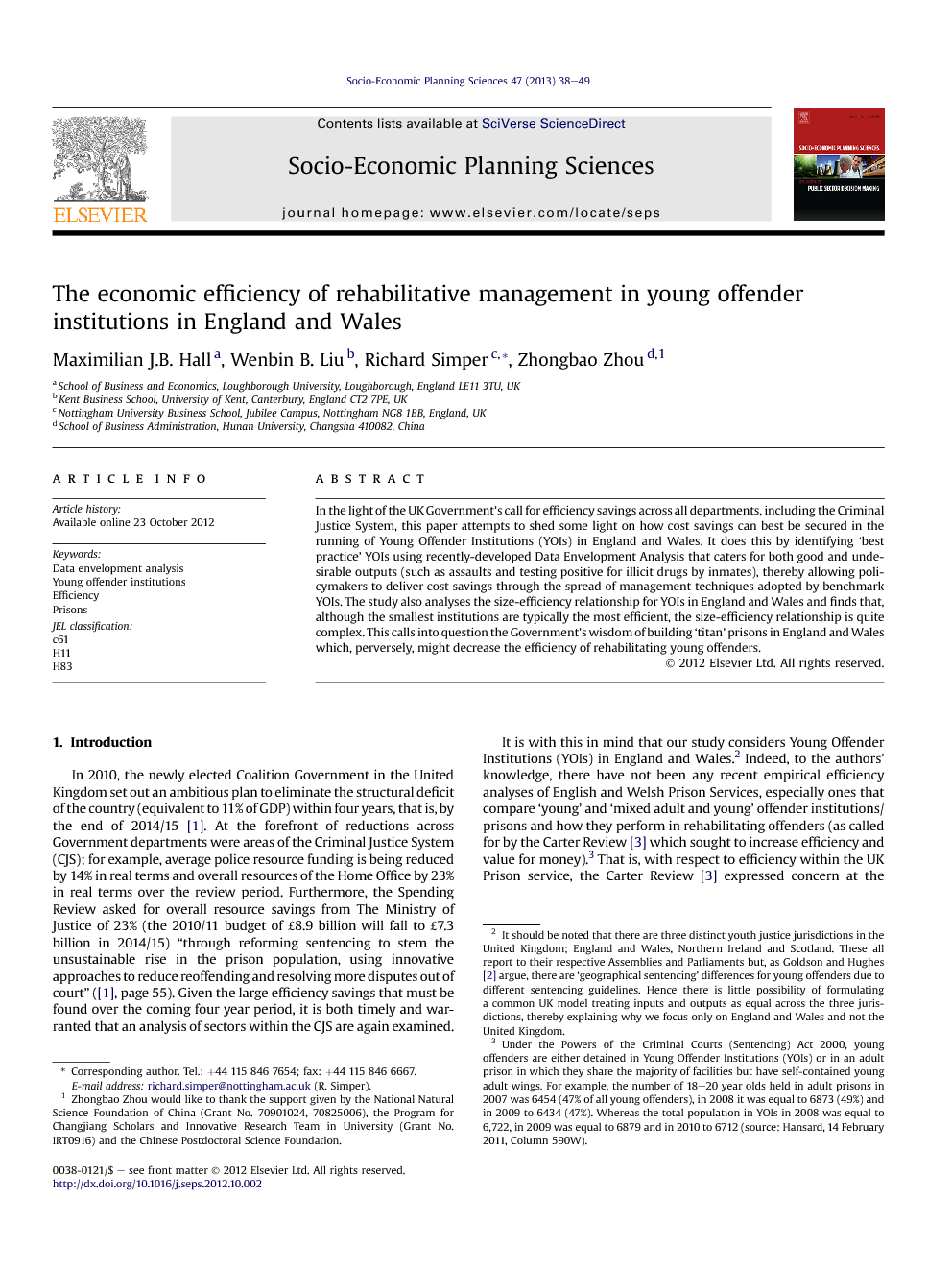 In the light of the UK Government's call for efficiency savings across all departments, including the Criminal Justice System, this paper attempts to shed some light on how cost savings can best be secured in the running of Young Offender Institutions (YOIs) in England and Wales. It does this by identifying ‘best practice’ YOIs using recently-developed Data Envelopment Analysis that caters for both good and undesirable outputs (such as assaults and testing positive for illicit drugs by inmates), thereby allowing policymakers to deliver cost savings through the spread of management techniques adopted by benchmark YOIs. The study also analyses the size-efficiency relationship for YOIs in England and Wales and finds that, although the smallest institutions are typically the most efficient, the size-efficiency relationship is quite complex. This calls into question the Government's wisdom of building ‘titan’ prisons in England and Wales which, perversely, might decrease the efficiency of rehabilitating young offenders.

In 2010, the newly elected Coalition Government in the United Kingdom set out an ambitious plan to eliminate the structural deficit of the country (equivalent to 11% of GDP) within four years, that is, by the end of 2014/15 [1]. At the forefront of reductions across Government departments were areas of the Criminal Justice System (CJS); for example, average police resource funding is being reduced by 14% in real terms and overall resources of the Home Office by 23% in real terms over the review period. Furthermore, the Spending Review asked for overall resource savings from The Ministry of Justice of 23% (the 2010/11 budget of £8.9 billion will fall to £7.3 billion in 2014/15) “through reforming sentencing to stem the unsustainable rise in the prison population, using innovative approaches to reduce reoffending and resolving more disputes out of court” ([1], page 55). Given the large efficiency savings that must be found over the coming four year period, it is both timely and warranted that an analysis of sectors within the CJS are again examined. It is with this in mind that our study considers Young Offender Institutions (YOIs) in England and Wales.2 Indeed, to the authors' knowledge, there have not been any recent empirical efficiency analyses of English and Welsh Prison Services, especially ones that compare ‘young’ and ‘mixed adult and young’ offender institutions/prisons and how they perform in rehabilitating offenders (as called for by the Carter Review [3] which sought to increase efficiency and value for money).3 That is, with respect to efficiency within the UK Prison service, the Carter Review [3] expressed concern at the pressures within the system in relation to prison places (both adult and young offenders), with the 81,000 available places in 2007 failing to match the 100,000 demand for places anticipated in 2014. To alleviate this problem, the Carter Review [3] argued that a process of ‘managerialism’ would need to be implemented. This would allow managers to: determine sentencing in a transparent manner to facilitate forecasting of demand for places; adopt new analyses and approaches to the benchmarking of prison performance to determine which are ‘best value’ prisons; and ‘develop and implement tools to improve efficiency and financial management of public sector prisons’. It also noted that “there is significant scope for increasing the efficiency and value for money of the prison system in the medium and long term, both in respect of the services that are delivered and the way in which they are delivered” (page 16). It is because of the Review that our sample begins in 2007 and ends with the most recent available data, that is, end 2010–11. We hope our study gives policy advisors the ability to determine benchmark institutions and thus help reduce costs to the CJS. The process of introducing efficiency targets and managerialism across suppliers of public services can be found in other areas of the CJS. Economic analysis of this process has covered, for example: policing [4], [5], [6] and [7] (including an official review [8]); prisons [9]; and, more recently published in this journal, the Probation Service [10]. Indeed, Sullivan [11] notes that “managerialism refers to the belief that all state services do better when reconceived and restructured in terms of the business community's values of efficiency and effectiveness” (page 307). Finally [3], noted that even across similar prisons, variations in cost per prisoner could be substantial. For example, in YOIs, in the case of medium-sized institutions (certified normal accommodation between 350 and 500 prisoners), the minimum cost per prisoner per day in 2008/09 was equal to £109 (at Rochester) and the maximum equal to £143 (at Lancaster Farms). The Carter Review concluded that “widespread differences in practice in regime provision, staff rostering, unionisation and the provision of additional accommodation at the prisons are likely to account for these variations in cost” (page 23).4 Hence, an analysis of which YOIs constitute ‘best practice’ or a benchmark organisation can provide information useful in determining which YOIs in England and Wales over the period 2007/08 to 2010/11 constitute value for money institutions, one of the aims of the Carter Review and a necessary process to ensure savings are met, as outlined in the Spending Review [1].5 The paper is structured as follows. In the next section we present a brief review of the structure of English and Welsh YOIs and their relationship with other government organisations. Section 3 reviews Data Envelopment Analysis and presents the modelling strategy used to analyse YOIs using the DEA model proposed by Liu et al. [14] that allows us to include both desirable and undesirable outputs. To the authors' knowledge, this is the first time Liu et al's [14] approach has been applied to a real data set in the first attempt to analyse the socio-economic factors behind rehabilitation in YOIs. Section 4 provides a description of the inputs and outputs used in the estimation of YOI efficiency. The results are analysed and presented in Section 5 along with policy recommendations for the YOIs and government. Finally, we conclude and summarize in Section 6.

Using the DEA program proposed by Liu et al. [14] that allows for the inclusion of both desirable and undesirable outputs, we have analysed the efficiency of English and Welsh Young Offender Institutions (YOIs) over the period 2007–08 to 2010–11. Efficiency scores for each YOI were estimated using the expenditure-based methodology to deliver Overall Efficiency, Technical Efficiency and Scale Efficiency scores. Having identified the ‘best practice’ frontier institutions, we were then in a position to compare the relative performances of different institutions, dividing the sample between male-based and female-based institutions and between split and non-split sites. Our aim is to ensure that YOIs have the ability to reduce re-offending through rehabilitative management and hence succeed in the ‘primary aim of the youth justice system to prevent offending by young children and young persons’ [61]. The size-efficiency relationship of the rehabilitative institutions was also examined. To the authors' knowledge, this is the first real World study using this approach that circumvents problems inherent in modelling bad inputs and outputs in traditional DEA models ([19], [20] and [21]). Further, it is also the first study to analyse prison efficiency with respect to young offenders in the socio-economics literature. Apart from identifying the frontier institutions and the reasons why other YOIs are not on the frontier, the main value of the paper lies in the analysis of the size-efficiency relationship which shows that, although the smallest YOIs are typically the most efficient in rehabilitating young offenders, the relationship is, in fact, quite complicated. This calls into question the wisdom of building ‘titan’ prisons in England and Wales as, although costs might indeed fall, there can be no presumption that efficiency will automatically increase. Policy-makers would be better to spend more time examining the operations of the frontier institutions with a view to spreading ‘best practice’ through the YOI establishment.