عنوان انگلیسی
Limitations of DEA-based approach and alternative methods in the measurement and comparison of social efficiency across firms in different transport modes: An empirical study in Japan
دانلود فوری مقاله + سفارش ترجمه 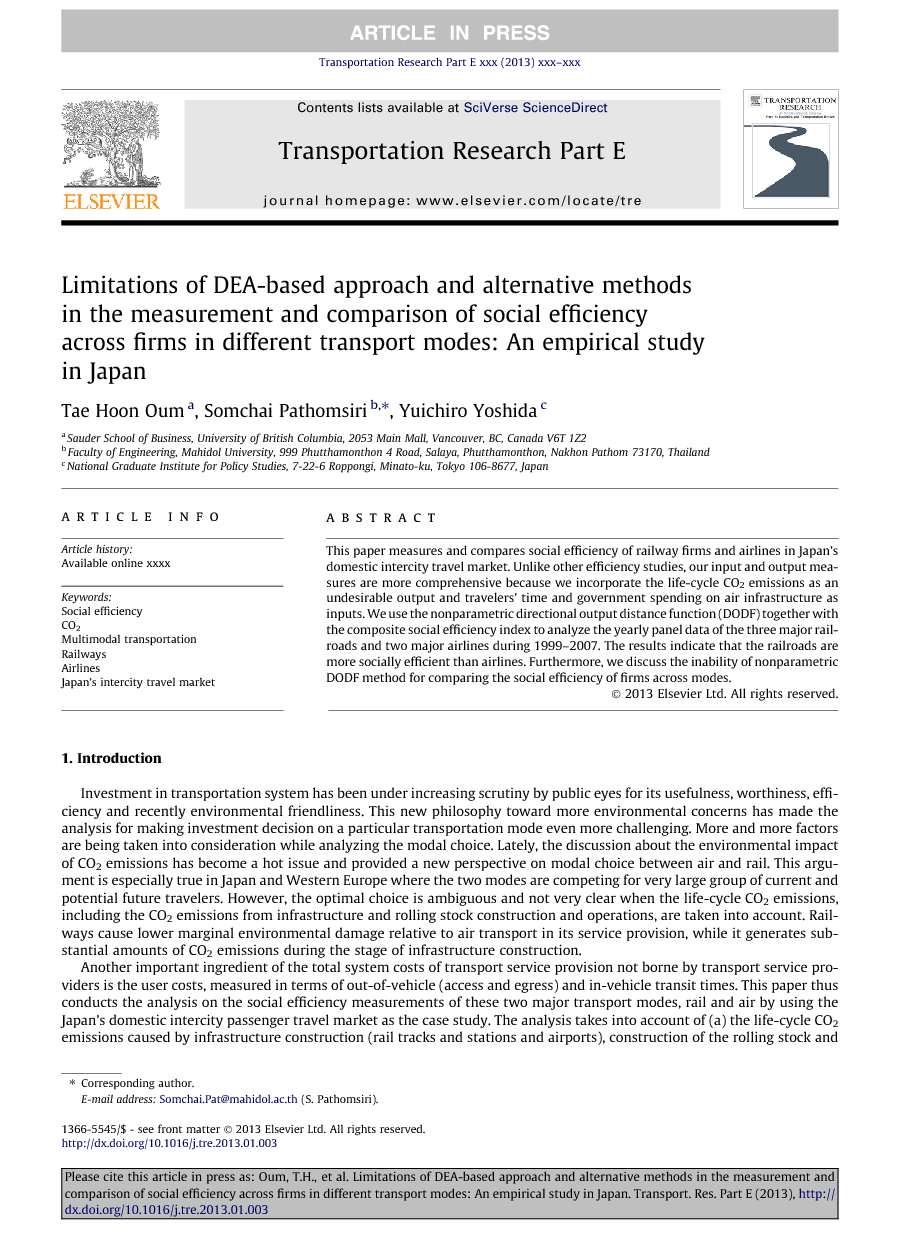 This paper measures and compares social efficiency of railway firms and airlines in Japan’s domestic intercity travel market. Unlike other efficiency studies, our input and output measures are more comprehensive because we incorporate the life-cycle CO2 emissions as an undesirable output and travelers’ time and government spending on air infrastructure as inputs. We use the nonparametric directional output distance function (DODF) together with the composite social efficiency index to analyze the yearly panel data of the three major railroads and two major airlines during 1999–2007. The results indicate that the railroads are more socially efficient than airlines. Furthermore, we discuss the inability of nonparametric DODF method for comparing the social efficiency of firms across modes.

Investment in transportation system has been under increasing scrutiny by public eyes for its usefulness, worthiness, efficiency and recently environmental friendliness. This new philosophy toward more environmental concerns has made the analysis for making investment decision on a particular transportation mode even more challenging. More and more factors are being taken into consideration while analyzing the modal choice. Lately, the discussion about the environmental impact of CO2 emissions has become a hot issue and provided a new perspective on modal choice between air and rail. This argument is especially true in Japan and Western Europe where the two modes are competing for very large group of current and potential future travelers. However, the optimal choice is ambiguous and not very clear when the life-cycle CO2 emissions, including the CO2 emissions from infrastructure and rolling stock construction and operations, are taken into account. Railways cause lower marginal environmental damage relative to air transport in its service provision, while it generates substantial amounts of CO2 emissions during the stage of infrastructure construction. Another important ingredient of the total system costs of transport service provision not borne by transport service providers is the user costs, measured in terms of out-of-vehicle (access and egress) and in-vehicle transit times. This paper thus conducts the analysis on the social efficiency measurements of these two major transport modes, rail and air by using the Japan’s domestic intercity passenger travel market as the case study. The analysis takes into account of (a) the life-cycle CO2 emissions caused by infrastructure construction (rail tracks and stations and airports), construction of the rolling stock and aircraft as well as system operation, (b) cost of airport construction, maintenance and operations, and (c) the time spent by passengers using these two modes. These three points are very important factors and new perspectives for social efficiency measurement and comparison between railway firms and airlines but have not been addressed in the past. New era of railway development in Japan started in 1987 when the Japan National Rail (JNR) authority was privatized. It was separated into six regional JR firms and one freight firm. On the main island of Japan there are three major passenger railway firms; namely, JR East, JR Central (or JR Tokai), and JR West. JR East covers the commercial area of the greater Tokyo as well as the north and north-east bound rail links. JR Central operates Tokaido Shinkansen, a high-speed rail system connecting the densest intercity transport link between Tokyo and Osaka, as well as the conventional train in Nagoya and Shizuoka areas. JR West operates in areas around and to the west of the greater Osaka, including Sanyo Shinkansen, a high-speed rail extending from Osaka to Hakata (Fukuoka). On the air transport side, Japan used to have three major players providing services in the domestic market. They are Japan Airlines (JAL), All Nippon Airways (ANA), and Japan Air System (JAS). In 2002, JAS was merged into JAL. Almost all airports in Japan are owned and operated by either national or regional governments except for the terminal buildings which are owned by private or corporatized government companies. From social point-of-view, costs associated with airports and terminals should be separated and attributed to individual airlines in proportion to their respective traffic volume. In this paper, we conduct social efficiency measurements, first by the nonparametric directional output distance function (DODF) approach. This is a recently proposed Data Envelopment Analysis (DEA) derivative model, where piece-wise linear production possibility frontier is estimated via linear program method. The advantage of this model as compared to the conventional DEA methods is in its ability to incorporate the undesirable output such as CO2. Since the DEA-based methods have difficulty in comparing efficiency of firms (or Decision Making Units – DMUs, in DEA terminology) across different modes or industries, we also use the social total factor productivity (S-TFP) index, and the average social cost (ASC) approach. In fact, we compare the social efficiency rankings obtained by DODF method with the rankings obtained by the composite social efficiency index derived from the average of S-TFP index and the inverse of the ASC index. Section 2 provides the literature review related to the transport efficiency study in general, and the methods for analyzing social efficiency in particular. Section 3 presents the research methods adopted for this research. The description of the data and variable constructions are given in Section 4. Section 5 reports and discusses the empirical results. Section 6 concludes the paper.

In this paper, we measured and compared the social efficiencies of the three major railway firms (JR East, JR Central and JR West) and the two Japanese airlines (ANA and the merged between JAL and JAS) using yearly panel over 1999–2007. We modeled each firm as a production system utilizing four inputs, i.e., labor, capital, (non-labor) variable cost and passengers’ time, and then produce one desirable output in term of equivalent passenger-kilometers and another undesirable output, i.e., the life-cycle CO2 emissions. We applied four nonparametric benchmarking methods consisting of the directional output distance function (DODF), social total factor productivity (S-TFP), average social cost (ASC) and composite social efficiency index for the analysis. The four methods reported compliment and supportive results such that the railway firms are more socially efficient than the airlines. However, the nonparametric DODF encountered the difficulty in comparing the social efficiency across firms not only in different modes, but also between the firms within same mode. This is probably because the dataset is highly heterogeneous, strictly clustered by modes. In addition, the sample size is not large enough for the data to scatter well. Therefore, the chance of a firm being compared across mode is rarely happened. This issue was healed by the results from the other three methods which help us draw the conclusion on the comparative social efficiency of all firms. All three methods confirm that JR Central is by far the most socially efficient followed by JR West, JR East, ANA and the merged between JAL and JAS.