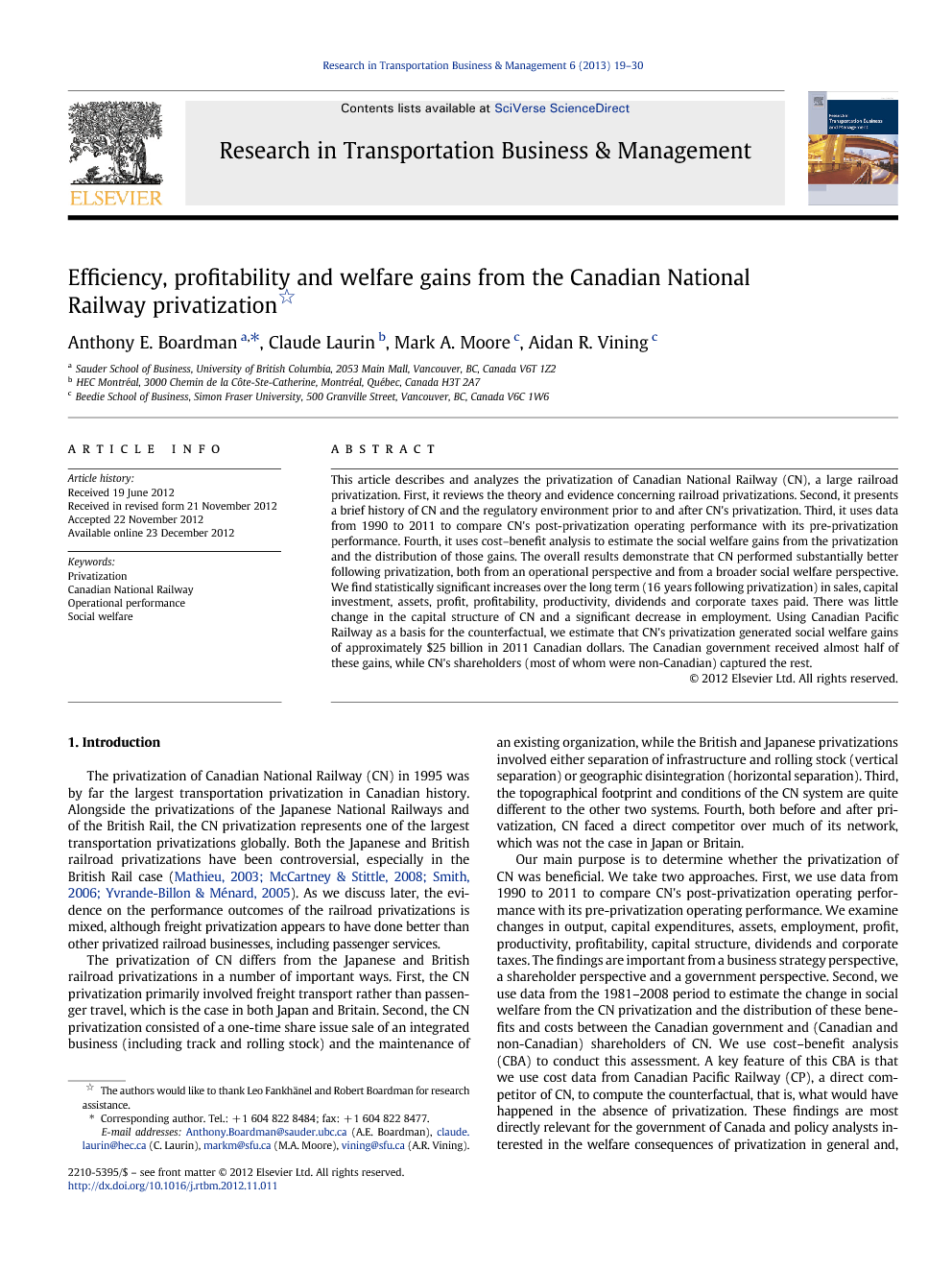 This article describes and analyzes the privatization of Canadian National Railway (CN), a large railroad privatization. First, it reviews the theory and evidence concerning railroad privatizations. Second, it presents a brief history of CN and the regulatory environment prior to and after CN's privatization. Third, it uses data from 1990 to 2011 to compare CN's post-privatization operating performance with its pre-privatization performance. Fourth, it uses cost–benefit analysis to estimate the social welfare gains from the privatization and the distribution of those gains. The overall results demonstrate that CN performed substantially better following privatization, both from an operational perspective and from a broader social welfare perspective. We find statistically significant increases over the long term (16 years following privatization) in sales, capital investment, assets, profit, profitability, productivity, dividends and corporate taxes paid. There was little change in the capital structure of CN and a significant decrease in employment. Using Canadian Pacific Railway as a basis for the counterfactual, we estimate that CN's privatization generated social welfare gains of approximately $25 billion in 2011 Canadian dollars. The Canadian government received almost half of these gains, while CN's shareholders (most of whom were non-Canadian) captured the rest.

The privatization of Canadian National Railway (CN) in 1995 was by far the largest transportation privatization in Canadian history. Alongside the privatizations of the Japanese National Railways and of the British Rail, the CN privatization represents one of the largest transportation privatizations globally. Both the Japanese and British railroad privatizations have been controversial, especially in the British Rail case (Mathieu, 2003, McCartney and Stittle, 2008, Smith, 2006 and Yvrande-Billon and Ménard, 2005). As we discuss later, the evidence on the performance outcomes of the railroad privatizations is mixed, although freight privatization appears to have done better than other privatized railroad businesses, including passenger services. The privatization of CN differs from the Japanese and British railroad privatizations in a number of important ways. First, the CN privatization primarily involved freight transport rather than passenger travel, which is the case in both Japan and Britain. Second, the CN privatization consisted of a one-time share issue sale of an integrated business (including track and rolling stock) and the maintenance of an existing organization, while the British and Japanese privatizations involved either separation of infrastructure and rolling stock (vertical separation) or geographic disintegration (horizontal separation). Third, the topographical footprint and conditions of the CN system are quite different to the other two systems. Fourth, both before and after privatization, CN faced a direct competitor over much of its network, which was not the case in Japan or Britain. Our main purpose is to determine whether the privatization of CN was beneficial. We take two approaches. First, we use data from 1990 to 2011 to compare CN's post-privatization operating performance with its pre-privatization operating performance. We examine changes in output, capital expenditures, assets, employment, profit, productivity, profitability, capital structure, dividends and corporate taxes. The findings are important from a business strategy perspective, a shareholder perspective and a government perspective. Second, we use data from the 1981–2008 period to estimate the change in social welfare from the CN privatization and the distribution of these benefits and costs between the Canadian government and (Canadian and non-Canadian) shareholders of CN. We use cost–benefit analysis (CBA) to conduct this assessment. A key feature of this CBA is that we use cost data from Canadian Pacific Railway (CP), a direct competitor of CN, to compute the counterfactual, that is, what would have happened in the absence of privatization. These findings are most directly relevant for the government of Canada and policy analysts interested in the welfare consequences of privatization in general and, more specifically, of railroad privatization. It also offers lessons to other governments considering railroad privatization or institutional reform. In sum, we find that the privatization of CN was beneficial to shareholders, to the government of Canada and to the overall welfare of Canadians. The most important results can be summarized as follows. In the short run (which we consider to be the 5-year period following privatization), profit (net income), profitability (return on assets and return on sales), and productivity (measured by sales per employee and net income per employee) increased significantly relative to the (5-year) pre-privatization period, employment experienced a statistically significant drop and there was no statistically significant change in sales revenue, capital investment, assets, capital structure, dividends or corporate taxes. In the long run (which we consider to be the 16-year period following privatization), there were statistically significant increases in sales, capital investment, assets, profit, profitability (return on assets and return on sales), and productivity (sales per employee and net income per employee). There were also statistically significant increases in dividends and corporate taxes, demonstrating that the most significant stakeholders in the privatization – government and shareholders – benefited from the privatization. Capital structure (debt-to-assets) did not change substantially. There was, however, a significant reduction in employment, although we argue that employees were not adversely affected. Turning to the welfare results, CN's privatization generated social welfare gains of almost $25 billion in 2011 Canadian dollars (which we use hereafter unless explicitly stated otherwise). The Canadian government received almost half of these gains, while CN shareholders (over half of whom were non-Canadian) captured the rest. The article is organized as follows. Section 2 briefly reviews the theory about privatization and summarizes the academic evidence concerning the outcomes of previous railroad privatizations in Japan, Britain, Australia, New Zealand and Chile. Section 3 presents a brief history of CN and of the regulation of Canadian railroads prior to privatization. It also describes some key events following privatization. Section 4 analyzes both the short-run and the long-run operational performance impacts of privatization. Section 5 presents our estimate of the overall welfare change attributable to the privatization of CN by using cost–benefit analysis, and of the distribution of these changes among different stakeholders. Section 6 summarizes the main results and identifies some of the factors that led to CN's success. It also offers lessons for private sector and government management, and includes some suggestions for future research.

Our main findings are that the privatization of CN improved sales, efficiency, profitability and social welfare. The total social welfare gains amounted to approximately $24.5 billion 2011 Canadian dollars. The increase in government surplus was about $11 billion, and the increase in producer surplus was about $13 billion with just under half of this amount going to Canadian citizens. The considerable size of these estimates demonstrates the potential value of a well-conducted privatization. Factors that contributed to the success in CN's case include the following. First, CN was well prepared for privatization and the privatization was not rushed. Non-core businesses were divested over a number of years prior to privatization. A few years before privatization, a new CEO was appointed with a mandate to improve efficiency and profitability in preparation for an eventual sale. Second, CN focused almost exclusively on freight, and provided no passenger services (although VIA Rail Canada and the Rocky Mountaineer provide some passenger services over parts of the network). Third, it was privatized as a vertically integrated company without separation of ‘wheels and rail’, thereby reducing transaction costs. Fourth, it was privatized through a share-issue privatization, rather than as a direct sale privatization. This ensured that CN was listed on the stock exchange and that ownership was not concentrated in a few hands. (In theory, this aspect could have been either advantageous or disadvantageous.) Fifth, there was a direct competitor. Sixth, there was some inter-modal competition from trucking and shipping, although these alternative modes were not as close substitutes as in many other countries, given the long-haul distances in Canada. This privatization offers some lessons for private sector and government management. This case study shows that company management can matter a great deal. While CN's average total costs were about 6% higher than CP's ATC prior to privatization, they were about 13% lower than CP's 5 years after privatization and thereafter. Tellier and Harrison took CN from underperforming relative to CP to outperforming it. According to Thompson (2003, 331) CN “is currently considered perhaps the best managed railroad in North America.” Management focused clearly on the core business and eliminated non-core assets, such as Wisconsin Central's holdings in a number of smaller railroads. Government managers carefully prepared CN for privatization, as we discussed above. Most importantly, they did not rush the privatization process. Tellier had 3 years to prepare CN for privatization. Another important lesson is that vertical disintegration (unbundling) may not be necessary for successful privatization when there is at least one other vertically integrated competitor. Indeed, Pittman (2005) argues vertically separated freight railroads tend towards bilateral monopoly, which has significant costs and only limited benefits. The Canadian experience suggests that having a vertically integrated duopoly is often a superior arrangement. Of course, these lessons pertain to freight privatization and may not apply to passenger privatization. A single, detailed study such as this one, in conjunction with other research findings, should provide some guidance to government policy makers in helping improve railroad privatization outcomes. There are some areas where additional research would provide further guidance. First, the performance and welfare effects of existing privatizations should be tracked over longer time periods (a large percentage of our estimated welfare gains are due to the assumed perpetual benefits that arise beyond the end of our data period). Second, it would be helpful if the welfare impacts of rail privatization could be further disaggregated by markets. This kind of analysis would shed light on the extent to which any measured gains from privatization flow from the presence of inter-modal or intra-modal competition. It may be that those routes on which CN faced no effective competition did not produce the same cost savings as on those where it had to compete directly against CP or where trucking or shipping were close substitutes. Third, more systematic evidence is needed to determine the conditions under which share issue privatization is superior to direct private sale. Along the same lines, more research is needed to substantiate our tentative conclusion that freight rail privatizations have been more successful than passenger rail privatizations. Finally, in order to control as much as possible for confounding effects, performance and welfare analyses of privatizations should compare actual post-privatization results to those that would have occurred in an explicit counterfactual situation of continued government ownership. Simple before-and-after comparisons cannot truly confirm that a privatization produced better results than state ownership. It is now widely accepted that privatization improves performance in competitive markets in developed countries. But there have been a number of reservations and caveats around this broadly positive conclusion. Do these improvements persist over time? Can these improvements occur in more oligopolistic markets? Although based on a single case study, this analysis suggests a positive answer to both questions.