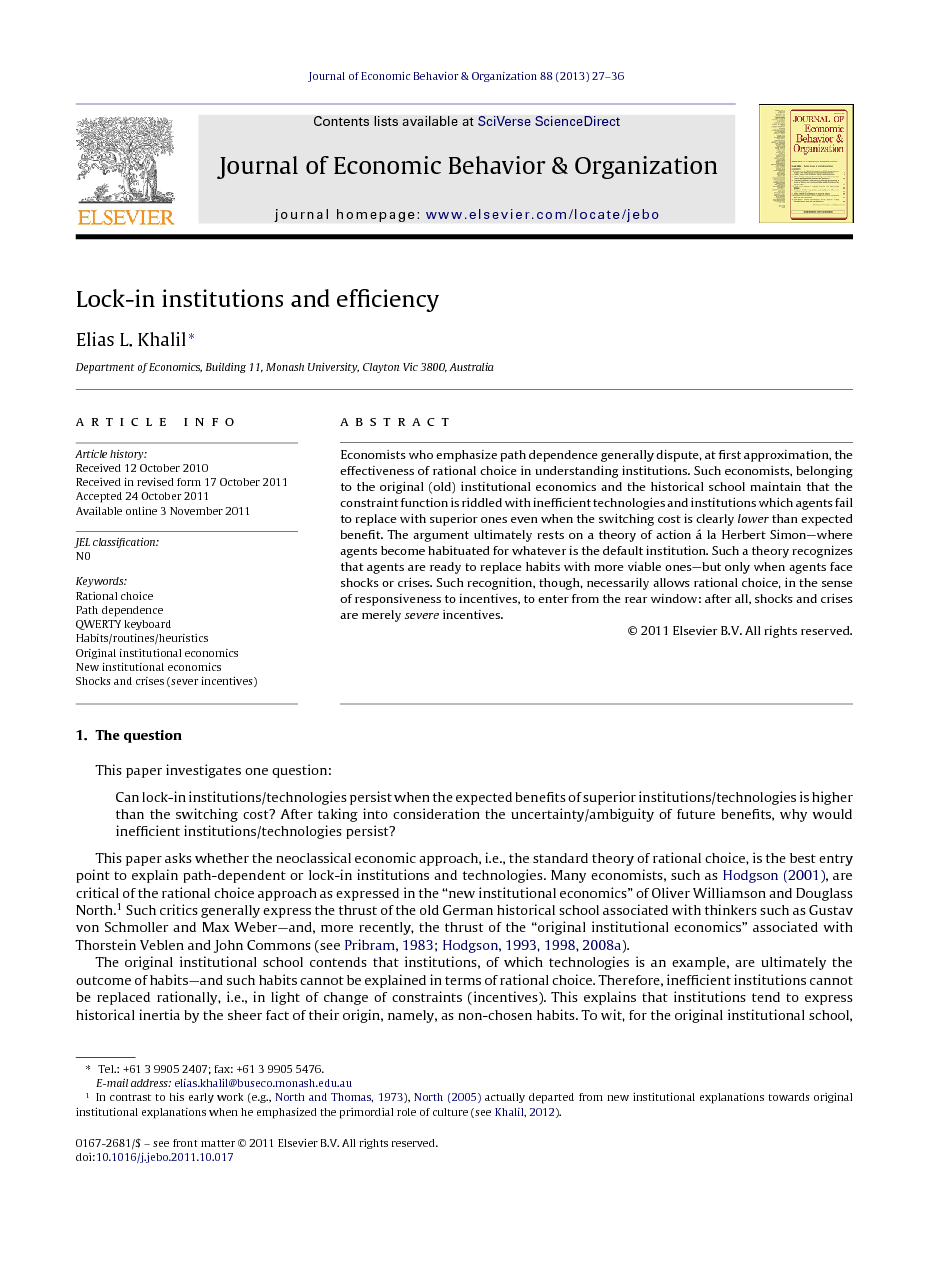 Economists who emphasize path dependence generally dispute, at first approximation, the effectiveness of rational choice in understanding institutions. Such economists, belonging to the original (old) institutional economics and the historical school maintain that the constraint function is riddled with inefficient technologies and institutions which agents fail to replace with superior ones even when the switching cost is clearly lower than expected benefit. The argument ultimately rests on a theory of action á la Herbert Simon—where agents become habituated for whatever is the default institution. Such a theory recognizes that agents are ready to replace habits with more viable ones—but only when agents face shocks or crises. Such recognition, though, necessarily allows rational choice, in the sense of responsiveness to incentives, to enter from the rear window: after all, shocks and crises are merely severe incentives.

This paper investigates one question: Can lock-in institutions/technologies persist when the expected benefits of superior institutions/technologies is higher than the switching cost? After taking into consideration the uncertainty/ambiguity of future benefits, why would inefficient institutions/technologies persist? This paper asks whether the neoclassical economic approach, i.e., the standard theory of rational choice, is the best entry point to explain path-dependent or lock-in institutions and technologies. Many economists, such as Hodgson (2001), are critical of the rational choice approach as expressed in the “new institutional economics” of Oliver Williamson and Douglass North.1 Such critics generally express the thrust of the old German historical school associated with thinkers such as Gustav von Schmoller and Max Weber—and, more recently, the thrust of the “original institutional economics” associated with Thorstein Veblen and John Commons (see Pribram, 1983, Hodgson, 1993, Hodgson, 1998 and Hodgson, 2008a). The original institutional school contends that institutions, of which technologies is an example, are ultimately the outcome of habits—and such habits cannot be explained in terms of rational choice. Therefore, inefficient institutions cannot be replaced rationally, i.e., in light of change of constraints (incentives). This explains that institutions tend to express historical inertia by the sheer fact of their origin, namely, as non-chosen habits. To wit, for the original institutional school, choices are not ultimately the product of calculation of future costs and benefits, but rather are the product of path-dependent institutions: even when better options are available, agents still choose the inefficient technology or routine simply because they became used to them, i.e., became habituated. This paper questions the logic of the argument of the original institutional economics. Therefore, empirical relevance or econometric testing of such argument falls outside the scope of this paper. This paper undertakes the analysis of the logic of the argument in three steps, as expressed in the three succeeding sections: 1. As Section 2 maintains, the fact that existing institutions are not replaced with superior ones does not mean necessarily that existing institutions are inefficient. As Liebowitz and Margolis (1990; see also Lewin, 2002) argue, to replace an existing institution with a superior one might involve costs that are higher than the expected benefits of the superior one. So, if the switching costs do not justify the adoption of the superior institution, the persistence of an inferior institution would be efficient. For the institutions to be inefficient, one must put forward the following thesis: Despite the fact that the switching cost is lower than the expected benefit of the superior institution, agents still fail to adopt the superior institution because of the sheer force of historical inertia or path dependence. Such a thesis, irrespective of its validity as discussed below, would amount to what Liebowitz and Margolis call “third-degree of path dependency.” 2.However, as Section 3 asks, what justifies third-degree of path-dependence – how would the sheer force of historical inertia allow the persistence of inefficient institutions? The only possible justification of third-degree of path dependency is the thesis that agents, to start with, do not choose institutions on the basis of efficiency. They rather accept whatever exists out of habit. So, agents are primed to take the default institution as given—i.e., they do not, at first approximation, assess them vis-à-vis alternatives. Such a theory of habit, as shown in this paper, can be traced back to Herbert Simon's notion of “procedural rationality.” For Simon, agents continue to use the same habits or heuristics irrespective of the change of circumstances. Agents, for Simon, question the default habits only when a crisis or a shock makes such habits non-viable. 3.However, as Section 4 shows, Simon's thesis of habits, which is at the core of the original institutional economics, cannot be sustained. The persistence of habits cannot indicate, contrary to Simon's thesis, that agents do not act rationally. It is part of the definition of habits that agents do not change habits in the face of minute changes of incentives. And the fact, which Simon recognizes, that agents are ready to dispose of their habits in the face of shocks, goes to show that agents do respond ultimately to incentives—but have to be severe incentives in the case of entrenched habits. So, in responding to shocks (severe incentives) agents, in the final analysis, act rationally. As such, Simon's idea of habits cannot provide the foundation for the third-degree of path dependence thesis. This paper ignores the radical school (Marglin, 1974, Gordon et al., 1982, Nelson, 1996 and Ogilvie, 2007; see Khalil, 2010d). While the radical school also questions the fruitfulness of the rationality approach, its advocates start with power relation and ‘exploitative’ exchange as the entry point of theorizing. For the radical school, the relative power among individuals dictates the nature of institutions in such a manner that makes them biased in favor of the more powerful elite or gender in order to sustain rent transfers from the less powerful to the more powerful agents. The radical school argues that, given the supposed exploitation, it is impossible to identify the objective function—i.e., the social welfare function—on the ground that it cannot be feasible when some individuals or segments ‘exploit’ other individuals or segments of the population. So, given the focus of the radical school on the objective function, it is outside the scope of this paper that focuses on institutions that make up the constraint function. This paper also ignores questions concerning institutions with regard to collective action, network externality, or reciprocity. Such institutions could become entrenched—but entrenched for reasons unrelated to habit. They rather become entrenched because of vested interests, political repression, or simply the cost of organizing collective action to move the Nash equilibrium from a suboptimal one to an efficient one.

This paper investigates whether the persistence of institutions or technologies, despite the appearance of superior ones, entails inefficiency or the inadequacy of the rational choice approach. For advocates of the original institutional economics, building on the work of Veblen and Commons, the persistence of institutions greatly demonstrates path dependence which entails inefficiency. This paper takes to task the original institutional school in three steps. First, this paper demonstrates, in Section 2, that when agents do not replace existing institutions with superior ones, this should not entail that persisting institutions are inefficient—a point already made by Liebowitz and Margolis and by Lewin. After all, the switching cost, which includes the uncertainty of costs, may exceed the present value of expected benefits, which includes the ambiguity of such future returns. That is, choices are inherently constrained by institutions that are the product of the historical past. There is no such thing as a “global ideal”—where choices are supposed to take place in a vacuum, i.e., free from constraints inherited from the past. The “global ideal” actually undermines the whole notion of choice: if choice is constraint-free, there is no raison d’être for choice. That is, choice, by definition, entails that each option has its cost. So, the argument that path-dependent institutions are inefficient must mean that agents, when expected benefits exceed switching cost, still choose the existing institutions over the optimal ones. This argument amounts to a strong sense of path dependency, what is called “third-degree of path dependency.” Second, this paper maintains, in Section 3, that the only possible justification of third-degree of path dependency is to replace rational choice theory with a theory of habituation á la Simon's procedural rationality. For Simon, agents do not maximize; they rather behave according to habits in the sense that habits are the entry point of theorizing. Even if agents see an opportunity for improvement, such as when the switching cost of institutions is lower than expected benefits, they would keep existing institutions because they became “habituated” to them. Simon and others recognize that agents may change their habits. But this is only prompted by a sudden shock that makes the old habits non-viable. Third, this paper registers, in Section 4, that the argument of Simon and others concerning the persistence of habits is ultimately non-tenable. When they recognize that agents do not change habits unless prompted by a shock, they have to assume rational choice: shocks are nothing but incentives—severe incentives. And responding to severe incentives, but not to minute incentives, is the whole definition of habits. Habits are designed, using rational choice at a higher level, to insulate the individual from minute changes of incentives in order to allow the individual to concentrate on more important or pressing challenges. As such, as of being rational, agents should respond to incentives only when they become severe, i.e., when they are confronted by shocks. This paper is a defense of the rational choice approach with regards to the persistence of institutions. This should not mean that humans do not actually behave irrationally. The phenomenon of weakness of will in the sense of succumbing to temptations is a great example of irrational behavior. But this phenomenon is better left for another arena.