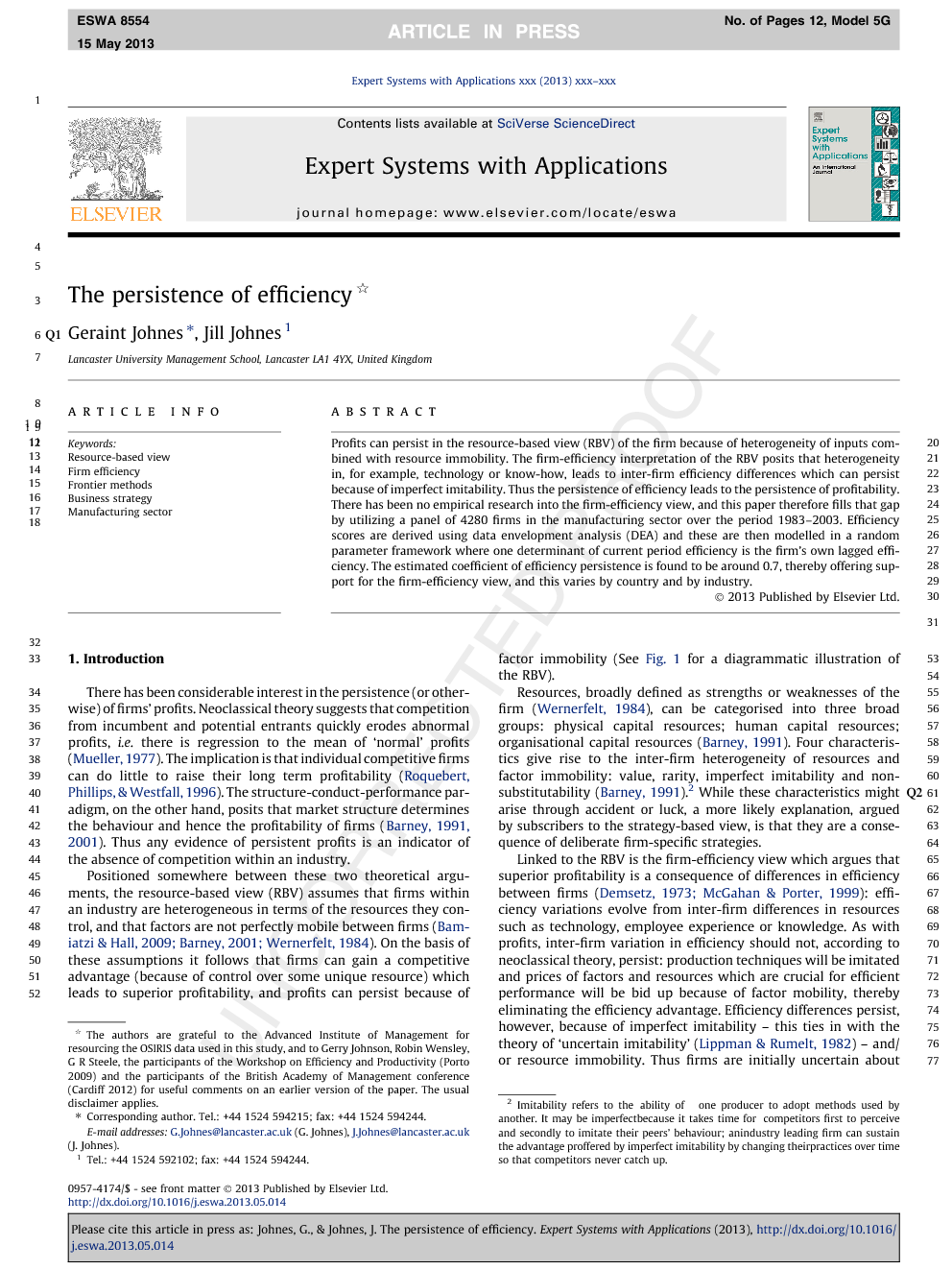 Profits can persist in the resource-based view (RBV) of the firm because of heterogeneity of inputs combined with resource immobility. The firm-efficiency interpretation of the RBV posits that heterogeneity in, for example, technology or know-how, leads to inter-firm efficiency differences which can persist because of imperfect imitability. Thus the persistence of efficiency leads to the persistence of profitability. There has been no empirical research into the firm-efficiency view, and this paper therefore fills that gap by utilizing a panel of 4280 firms in the manufacturing sector over the period 1983–2003. Efficiency scores are derived using data envelopment analysis (DEA) and these are then modelled in a random parameter framework where one determinant of current period efficiency is the firm’s own lagged efficiency. The estimated coefficient of efficiency persistence is found to be around 0.7, thereby offering support for the firm-efficiency view, and this varies by country and by industry.

There has been considerable interest in the persistence (or otherwise) of firms’ profits. Neoclassical theory suggests that competition from incumbent and potential entrants quickly erodes abnormal profits, i.e. there is regression to the mean of ‘normal’ profits (Mueller, 1977). The implication is that individual competitive firms can do little to raise their long term profitability (Roquebert, Phillips, & Westfall, 1996). The structure-conduct-performance paradigm, on the other hand, posits that market structure determines the behaviour and hence the profitability of firms ( Barney, 1991 and Barney, 2001). Thus any evidence of persistent profits is an indicator of the absence of competition within an industry. Positioned somewhere between these two theoretical arguments, the resource-based view (RBV) assumes that firms within an industry are heterogeneous in terms of the resources they control, and that factors are not perfectly mobile between firms (Bamiatzi and Hall, 2009, Barney, 2001 and Wernerfelt, 1984). On the basis of these assumptions it follows that firms can gain a competitive advantage (because of control over some unique resource) which leads to superior profitability, and profits can persist because of factor immobility (See Fig. 1 for a diagrammatic illustration of the RBV).Resources, broadly defined as strengths or weaknesses of the firm (Wernerfelt, 1984), can be categorised into three broad groups: physical capital resources; human capital resources; organisational capital resources (Barney, 1991). Four characteristics give rise to the inter-firm heterogeneity of resources and factor immobility: value, rarity, imperfect imitability and non-substitutability (Barney, 1991).2 While these characteristics might arise through accident or luck, a more likely explanation, argued by subscribers to the strategy-based view, is that they are a consequence of deliberate firm-specific strategies. Linked to the RBV is the firm-efficiency view which argues that superior profitability is a consequence of differences in efficiency between firms (Demsetz, 1973 and McGahan and Porter, 1999): efficiency variations evolve from inter-firm differences in resources such as technology, employee experience or knowledge. As with profits, inter-firm variation in efficiency should not, according to neoclassical theory, persist: production techniques will be imitated and prices of factors and resources which are crucial for efficient performance will be bid up because of factor mobility, thereby eliminating the efficiency advantage. Efficiency differences persist, however, because of imperfect imitability – this ties in with the theory of ‘uncertain imitability’ (Lippman & Rumelt, 1982) – and/or resource immobility. Thus firms are initially uncertain about the way in which inputs are converted into outputs in the context of new production endeavours, and they may find it difficult to imitate production (e.g. because of patents); factor mobility may be imperfect (e.g. because of control over a crucial input); or there may be uncertainty in identifying the crucial inputs (Wernerfelt, 1984). Efficiency differences between incumbent firms can therefore exist even in the context of a market structure with a large number of firms and in the absence of scale economies, and these can lead to the existence and persistence of inter-firm differences in profitability. Other observed industry characteristics can also be explained by inter-firm efficiency differences: the greater the inter-firm efficiency differences, the greater is the variance in market shares within that industry, and the higher the market concentration and industry profit (Schmalensee, 1985). Evidence from the USA supports the view that inter-firm product quality and efficiency differences determine both market share and profitability (Mueller, 1990). There has been considerable empirical analysis of the persistence of profits and investigation into its determinants, and particularly into the relative importance of industry and firm characteristics (Bou and Satorra, 2007, Cubbin and Geroski, 1987, Goddard and Wilson, 1990, Hawawini et al., 2003, Jacobson and Hansen, 2001, Mauri and Michaels, 1998, McGahan and Porter, 1997, McGahan and Porter, 1999, McGahan and Porter, 2003, Roquebert et al., 1996, Ruefli and Wiggins, 2003, Rumelt, 1991 and Schmalensee, 1985). In contrast, very little work has been undertaken into the persistence of efficiency. The purpose of this paper is to investigate the persistence of efficiency (rather than the persistence of profits) and thereby fill an obvious gap in the literature. Empirical evidence that inter-firm efficiency differences persist would offer support for the firm-efficiency explanation of the RBV. To our knowledge, this is the first exploration of that topic. The paper is in five parts of which this is the first. Section 2 provides a review of the literature after which follows a methodological outline and presentation of the data in Section 3. The results of the empirical analysis are reported in Section 4 and conclusions are drawn in Section 5.

There has been considerable debate over whether empirical evidence regarding the persistence of profits supports the neoclassical theory or the structure-conduct-performance paradigm. There has been far less research into the resource-based view and underlying differences in inputs and input usage which can lead to persistent profits. This study therefore examines persistence of efficiency in an attempt to find whether there is any evidence to support the firm-efficiency interpretation of the resource-based view. The analysis makes a number of other original contributions to the literature. First, in contrast to studies of persistence of profits, which largely utilize data on firms which survive the whole period of the analysis, this study includes all firms over the period: survivors, new entrants and firms exiting. Second, rather than concentrating on the largest firms in the sector as is the case with the majority of studies of the persistence of profits, this study includes firms of all sizes in the analysis. Third, this study includes firms across 12 different developed countries. The main finding is that there is evidence that efficiency persists (the mean persistence parameter is significantly different from zero) and dissipates, on average, at a rate of just under 30% per annum. This offers support for the uncertain imitability hypothesis. Moreover, there is evidence that persistence in efficiency varies across industries, countries and over time. Thus firms either differ in terms of luck (providing them with a production process which is difficult for other firms to imitate), or they differ in terms of their strategic success at maintaining an efficient production process.