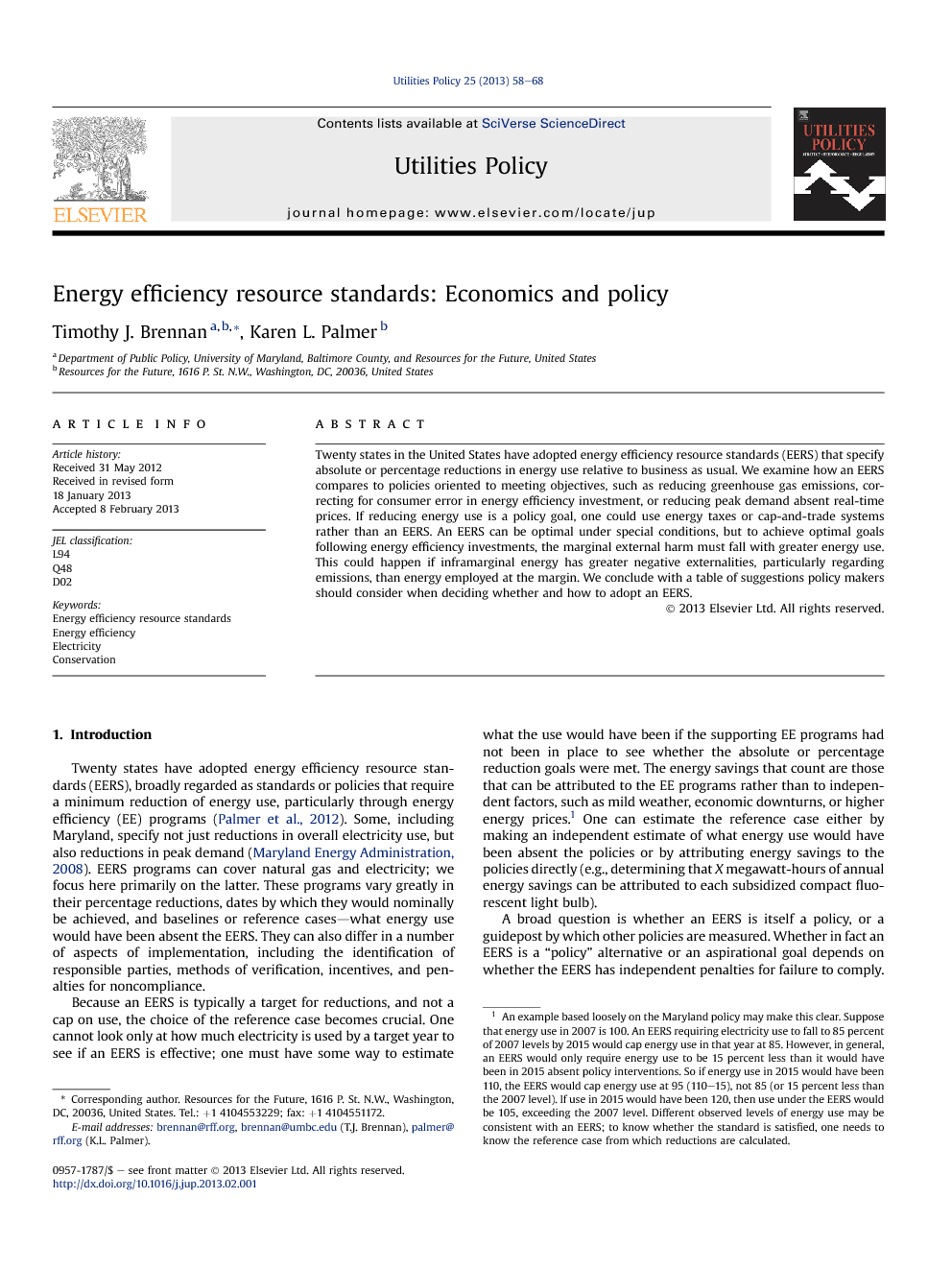 Twenty states in the United States have adopted energy efficiency resource standards (EERS) that specify absolute or percentage reductions in energy use relative to business as usual. We examine how an EERS compares to policies oriented to meeting objectives, such as reducing greenhouse gas emissions, correcting for consumer error in energy efficiency investment, or reducing peak demand absent real-time prices. If reducing energy use is a policy goal, one could use energy taxes or cap-and-trade systems rather than an EERS. An EERS can be optimal under special conditions, but to achieve optimal goals following energy efficiency investments, the marginal external harm must fall with greater energy use. This could happen if inframarginal energy has greater negative externalities, particularly regarding emissions, than energy employed at the margin. We conclude with a table of suggestions policy makers should consider when deciding whether and how to adopt an EERS.

Twenty states have adopted energy efficiency resource standards (EERS), broadly regarded as standards or policies that require a minimum reduction of energy use, particularly through energy efficiency (EE) programs (Palmer et al., 2012). Some, including Maryland, specify not just reductions in overall electricity use, but also reductions in peak demand (Maryland Energy Administration, 2008). EERS programs can cover natural gas and electricity; we focus here primarily on the latter. These programs vary greatly in their percentage reductions, dates by which they would nominally be achieved, and baselines or reference cases—what energy use would have been absent the EERS. They can also differ in a number of aspects of implementation, including the identification of responsible parties, methods of verification, incentives, and penalties for noncompliance. Because an EERS is typically a target for reductions, and not a cap on use, the choice of the reference case becomes crucial. One cannot look only at how much electricity is used by a target year to see if an EERS is effective; one must have some way to estimate what the use would have been if the supporting EE programs had not been in place to see whether the absolute or percentage reduction goals were met. The energy savings that count are those that can be attributed to the EE programs rather than to independent factors, such as mild weather, economic downturns, or higher energy prices.1 One can estimate the reference case either by making an independent estimate of what energy use would have been absent the policies or by attributing energy savings to the policies directly (e.g., determining that X megawatt-hours of annual energy savings can be attributed to each subsidized compact fluorescent light bulb). A broad question is whether an EERS is itself a policy, or a guidepost by which other policies are measured. Whether in fact an EERS is a “policy” alternative or an aspirational goal depends on whether the EERS has independent penalties for failure to comply. If it does, those charged with compliance will treat the EERS as a policy in and of itself; if it is a goal, then the primary focus should be on the policies that an EERS engenders, rather than the EERS itself. One way to understand this “policy or goal” question is to consider whether an EERS is a substitute for, or a complement to, alternative policies. If it is a substitute, this implies that the EERS is a policy unto itself that takes the place of other policies. For example, were a cap-and-trade program in place, states might be less likely to adopt an EERS, believing that the goals of the EERS are being addressed in another way. An EERS is a goal, rather than a policy, if other policies are complements in that having an EERS in place increases the demand for them. For example, if having an EERS makes it more likely that a utility, state agency, or other entity will adopt policies, such as energy efficiency equipment subsidies or cap-and-trade mechanisms, to meet the EERS, then the EERS is a complement to those policies, not a substitute for them. Viewed in this light, an EERS would appear to be more of an aspirational goal for direct policy interventions to meet, rather than a policy itself. Justifications for EERS programs usually appeal to factors beyond energy use directly; these include mitigating emissions and reducing electricity use during expensive peak demand periods. States may also institute EERS programs to encourage energy efficiency investments when the benefits from reduced spending on energy exceed their up-front costs, but consumers nevertheless fail to take advantage of them. Other rationales include promoting economic development and employment (“green jobs”) and addressing energy security (Palmer et al., 2012). We begin by examining how an EERS compares to policies designed to address those specific justifications. We then turn to how an EERS would be designed if energy use reductions were the objective, to reach the level of energy use where its marginal value—willingness to pay less marginal cost—equals its marginal external harm. Using that framework, we identify conditions under which an EERS, specified by an absolute amount of energy reductions or an amount based on a percentage of business-as-usual (BAU) use, could lead to an optimal amount of energy use reductions as the underlying demand for energy changes. When the change in underlying demand is the result of increased investments in energy efficiency, the resulting reduction in the elasticity of demand for energy implies that an EERS leads to an optimal outcome only if the marginal external harm falls the more energy is used. This may well be the case when, for example, marginal megawatt-hours of electricity are generated using natural gas, which pollutes less than using coal to generate inframarginal megawatt-hours. We conclude with a table with suggestions for policy makers in considering whether and how to adopt an EERS, including consideration of justifications, alternative policies, energy savings measurement, the role of utilities, and structure of the program.

As noted at the outset, twenty U.S. states have adopted EERS programs to reduce energy use. Three countries in the European Union have tradable white certificate programs, in which those who can exceed energy-reduction targets at low cost can sell certificates to others who find energy reductions more expensive. States that have implemented EERS programs have offered a number of rationales, but each of those rationales might be addressed more effectively and at lower cost by policies specifically targeted to address them rather than by focusing on gross percentage electricity use reductions. If energy policy makers believe that energy use reductions should be the objective, they could address those through direct policies such as energy use taxes or permit programs. To the extent that an EERS is employed, it need not produce optimal energy use reductions, with varying demand for energy, except under special conditions related to the slopes of the marginal harm curve, marginal value of energy, and how the latter may change in response to factors affecting how much users are willing to pay for electricity or the marginal cost of generating it. If the shift in the marginal value of energy results from energy efficiency investment, these conditions are satisfied only if inframarginal units of energy are more harmful than marginal units, although policies directed at emissions rather than electricity use will be able to target inframarginal electricity sources and lead to a more economically efficient outcome. Decreasing marginal damages from generation can happen if marginal units of electricity are produced with less emissions-intensive fuels and technologies, but it raises a possibility that the optimal EERS would be to have none at all if it excludes only less-polluting energy sources. It may be useful to summarize lessons for policy makers, particularly at the state level. Continuing our focus on electricity, Table 1 summarizes these lessons in five categories: justifications, alternatives to an EERS, savings measurement, utility involvement, and structuring the EERS.The cost-effectiveness of an EERS policy at achieving a particular goal, whether environmental or related to energy use, will depend on how the policy is designed. One way to maximize cost-effectiveness might be to allow trading as well as banking and borrowing of energy savings credits among utilities and others who have obligations to demonstrate energy savings under the EERS policy. Experience in Europe suggests that trading of energy saving credits can work; however, experience is limited and the size of the gains from credit trading and the main factors that influence those gains are unclear. Credit trading and banking also require the development of standard protocols for measuring energy savings attributable to the EERS and for how those approaches would evolve over time. Future research is needed to understand how best to design cost-effective EERS policies that take advantage of cost-effective opportunities for trading, banking, and borrowing.