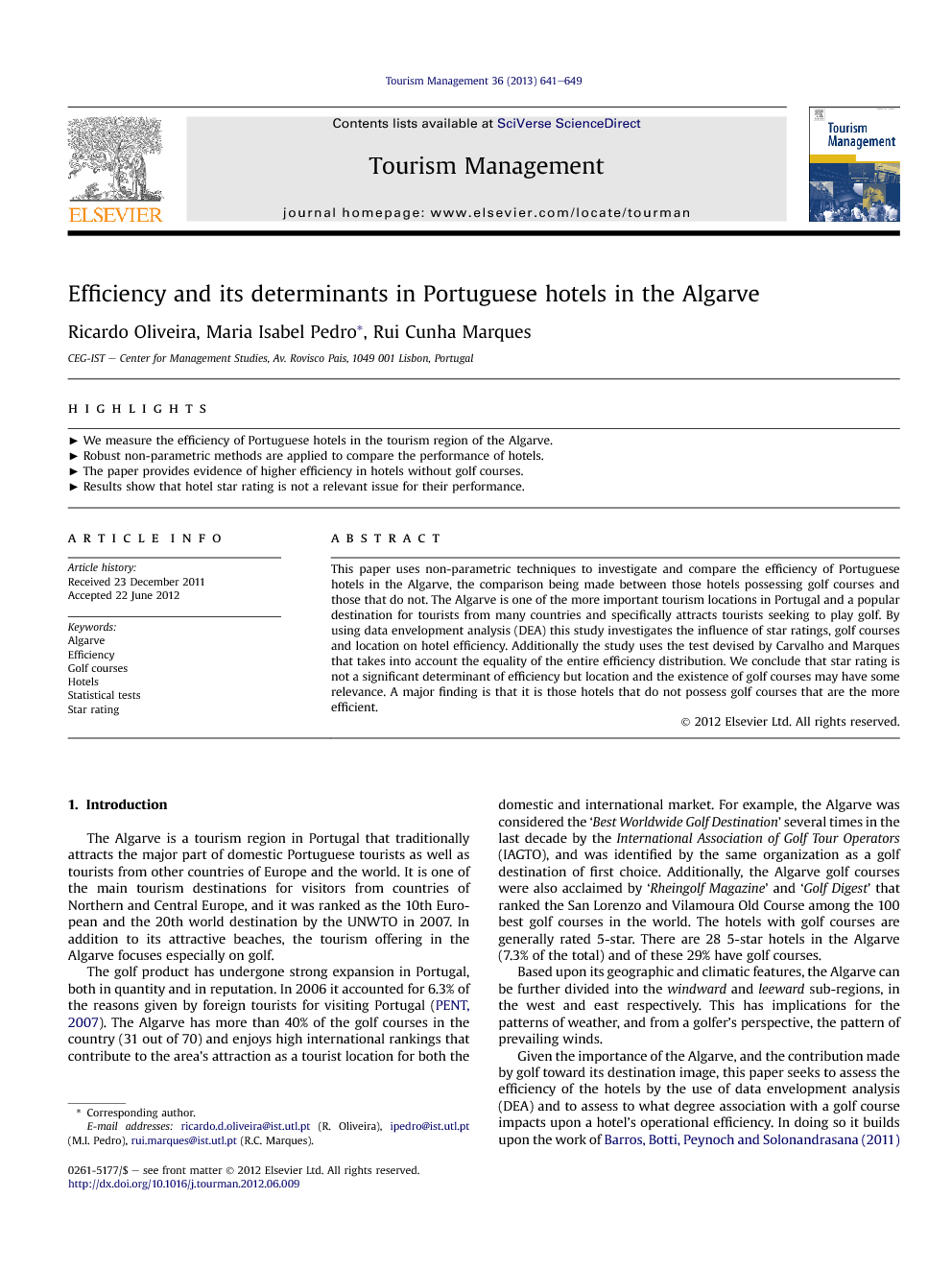 This paper uses non-parametric techniques to investigate and compare the efficiency of Portuguese hotels in the Algarve, the comparison being made between those hotels possessing golf courses and those that do not. The Algarve is one of the more important tourism locations in Portugal and a popular destination for tourists from many countries and specifically attracts tourists seeking to play golf. By using data envelopment analysis (DEA) this study investigates the influence of star ratings, golf courses and location on hotel efficiency. Additionally the study uses the test devised by Carvalho and Marques that takes into account the equality of the entire efficiency distribution. We conclude that star rating is not a significant determinant of efficiency but location and the existence of golf courses may have some relevance. A major finding is that it is those hotels that do not possess golf courses that are the more efficient.

The Algarve is a tourism region in Portugal that traditionally attracts the major part of domestic Portuguese tourists as well as tourists from other countries of Europe and the world. It is one of the main tourism destinations for visitors from countries of Northern and Central Europe, and it was ranked as the 10th European and the 20th world destination by the UNWTO in 2007. In addition to its attractive beaches, the tourism offering in the Algarve focuses especially on golf. The golf product has undergone strong expansion in Portugal, both in quantity and in reputation. In 2006 it accounted for 6.3% of the reasons given by foreign tourists for visiting Portugal (PENT, 2007). The Algarve has more than 40% of the golf courses in the country (31 out of 70) and enjoys high international rankings that contribute to the area's attraction as a tourist location for both the domestic and international market. For example, the Algarve was considered the ‘Best Worldwide Golf Destination’ several times in the last decade by the International Association of Golf Tour Operators (IAGTO), and was identified by the same organization as a golf destination of first choice. Additionally, the Algarve golf courses were also acclaimed by ‘Rheingolf Magazine’ and ‘Golf Digest’ that ranked the San Lorenzo and Vilamoura Old Course among the 100 best golf courses in the world. The hotels with golf courses are generally rated 5-star. There are 28 5-star hotels in the Algarve (7.3% of the total) and of these 29% have golf courses. Based upon its geographic and climatic features, the Algarve can be further divided into the windward and leeward sub-regions, in the west and east respectively. This has implications for the patterns of weather, and from a golfer's perspective, the pattern of prevailing winds. Given the importance of the Algarve, and the contribution made by golf toward its destination image, this paper seeks to assess the efficiency of the hotels by the use of data envelopment analysis (DEA) and to assess to what degree association with a golf course impacts upon a hotel's operational efficiency. In doing so it builds upon the work of Barros, Botti, Peynoch and Solonandrasana (2011) and their study of Portuguese hotels, by comparing the efficiency of 4-star and 5-star hotels and also those with and without golf courses. Furthermore, the efficiency of the hotels of the two sub-regions is also compared. DEA has numerous advantages over other (parametric) methods (e.g. stochastic frontier analysis – SFA) since it does not require any a priori assumption of a function to represent the production or cost frontier, neither does require as many data assumptions as parametric methods with, for example, respect to normality of distribution, independence of variables or assumptions relating to error terms (Kumbhakar & Lovell, 2000). A sample of 84 hotels for the years 2005–2007 is used in this investigation. This paper makes several contributions to the literature. The first concerns the novelty of investigating the determinants of efficiency using non-parametric methods, particularly the influence of star ratings and the existence of golf courses. Second, robust methods are used to compare the statistical distributions of efficiency and a new statistical test is applied. Finally, it is the first time that the efficiency of hotels specific to the Algarve has been analyzed and this still remains (thus far) as one of the few studies of this nature in Portugal. The remainder of the paper is organized as follows. Section 2 presents a literature review on hotel efficiency. Section 3 introduces the methodologies adopted and proposed for this research. Section 4 describes the case study on efficiency estimation and its determinants, comprising 84 Portuguese hotels in the Algarve and, finally, and Section 5 presents the concluding remarks.

This paper measures the performance of a sample of hotels in the Portuguese region of the Algarve. It was noted that the Algarve is one of the more important European tourism regions, one reason being its reputation for high quality golf courses. By applying the non-parametric technique of DEA, we estimated the efficiency of a sample of 84 hotels considering different models (CRS and VRS) and orientations (input and output). Differing levels of inefficiency were identified under differing assumptions under models that, unlike previous studies, incorporated variables such as the star rating of a hotel and whether it was lined with a golf course. An additional variable was the importance of location since the region studied (Algarve) has two distinct and well-defined areas (windward and leeward). Additionally the testing included the testing suggested by Carvalho and Marques (2011), a procedure that bootstraps data to compare the distributions of efficiencies. It was found that, under certain circumstances, that star ratings do not matter as far as efficiency is concerned but that location and the existence of golf courses might be relevant. However, it is to be noted that differences in test results emerged whether one was using CRS or VRS, and the results are complicated by the possibility of some bias in the sample. Nonetheless one clear result does emerge, and that is that hotels without golf courses are more efficient. Given a past policy to encourage golf based tourism this finding poses some problems for future public policies, as there is little doubt that the high reputation of the Algarve for golf is a factor in its tourism industry. It raises issues that go beyond the data discussed and analyzed in this paper, which is the relationship between the policies and concerns of the public sector with its wish and responsibilities for developing regional income and employment, and the concerns of a private sector that requires a return on investment and equally a return for private sector shareholders. This is not a debate unique to hotels on the Algarve, but it does raise a further issue in the application of DEA, and that is to what degree might the technique be applied to the intangibles inherent in other measures of company efficiency and policy that are inherent in corporate socially responsible policies.