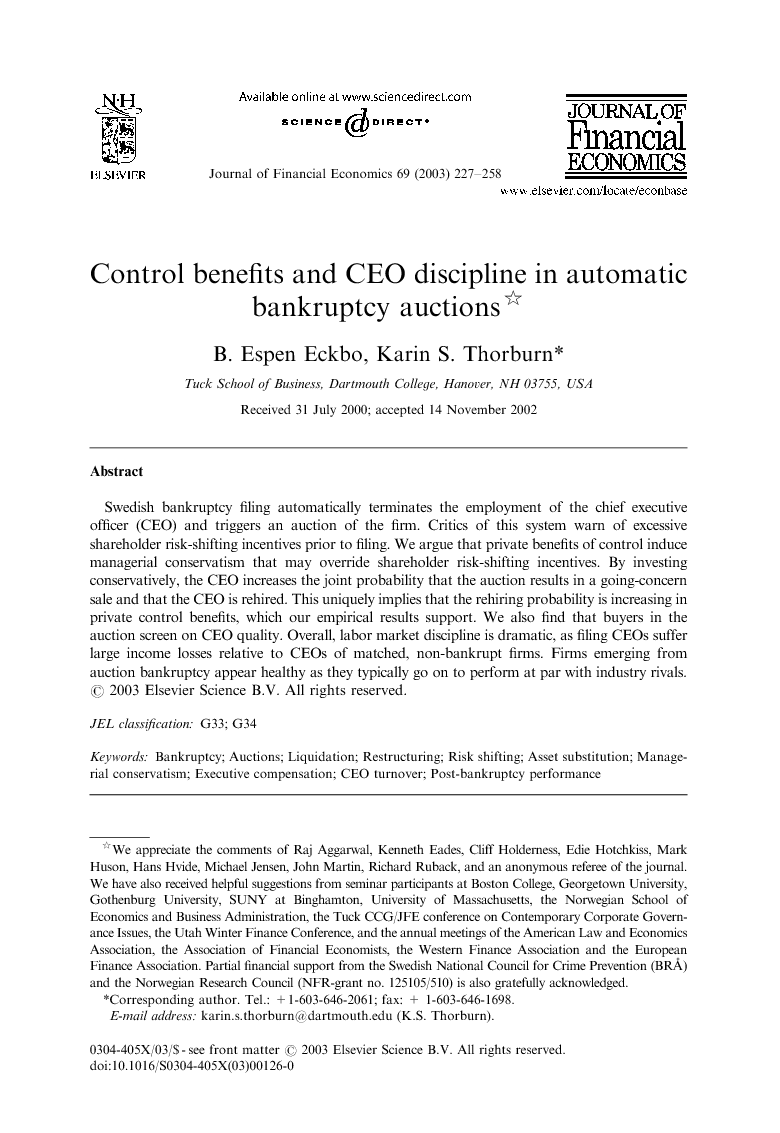 Swedish bankruptcy filing automatically terminates the employment of the chief executive officer (CEO) and triggers an auction of the firm. Critics of this system warn of excessive shareholder risk-shifting incentives prior to filing. We argue that private benefits of control induce managerial conservatism that may override shareholder risk-shifting incentives. By investing conservatively, the CEO increases the joint probability that the auction results in a going-concern sale and that the CEO is rehired. This uniquely implies that the rehiring probability is increasing in private control benefits, which our empirical results support. We also find that buyers in the auction screen on CEO quality. Overall, labor market discipline is dramatic, as filing CEOs suffer large income losses relative to CEOs of matched, non-bankrupt firms. Firms emerging from auction bankruptcy appear healthy as they typically go on to perform at par with industry rivals

Jensen and Meckling (1976) observe that the limited-liability feature of equity provides an incentive for shareholders to substitute high-risk for low-risk projects during financial distress. In this paper, we focus on the risk-shifting incentives of managers, not just of shareholders. Risk shifting requires active participation of the chief executive officer (CEO), and we argue that the CEO may actually prefer to invest conservatively in order to protect her private benefits of control. We explore this argument in the context of bankruptcy filings in Sweden, where a filing summarily terminates managerial employment contracts and places the firm in an open auction. The hard constraint on management in this automatic auction system has caused several authors, including Aghion et al. (1992), White (1996), and Hart (2000), to warn of excessive risk shifting prior to filing. However, our empirical analysis, which explores the notion of managerial conservatism, suggests that this warning is premature. While risk shifting may be close to a free option for shareholders of an insolvent firm, “going for broke” increases the chance that the CEO loses her job. Our key argument is that, when the CEO derives private benefits from control, she has an incentive to invest conservatively to hedge against unfavorable bankruptcy outcomes. These unfavorable outcomes include outright company liquidation, where the CEO position is eliminated, or reorganization as a going concern with another CEO at the helm. Conversely, by investing conservatively, the CEO increases the chance of firm survival and, hence, of being rehired by the buyer in the auction. Thus, we argue that the existence of private control benefits creates a manager–shareholder conflict of interest during severe distress, which counteracts risk shifting. Moreover, we show that this conflict arises even if the manager owns a large equity stake in the firm. Our focus on private benefits of control and the implication for managerial conservatism complements the traditional analysis of contractual arrangements designed to regulate risk-shifting incentives. As documented in Smith and Warner (1979), contractual arrangements include debt covenants prohibiting certain forms of asset dispositions, such as merger, sale-leaseback, and asset collateralization. Risk-shifting incentives are also reduced by the use of convertible debt in the firm's capital structure [e.g., Green (1984)]. Moreover, in countries such as Sweden and the United States, the legal code to some extent requires company directors to shift their fiduciary responsibility towards bondholders when approaching bankruptcy [e.g., Gilson (1990)]. The notion that managerial incentives can produce a conservative investment policy is not new. A substantial theoretical literature shows that managerial concern with reputational capital can induce conservatism.1 Our contribution is to associate conservatism with the existence of managerial private benefits of control, and to empirically examine incentive effects of control benefits in a setting where they are likely to be highly relevant for the firm's investment choices. Our argument is made interesting by the fact that, while reputational capital is specific to the individual CEO, private benefits of control are largely firm-specific. Furthermore, private benefits are generally non-contractible and thus nontransferrable, except through the outright purchase of corporate control. For example, a potentially important private benefit is the power to hide incompetence and low work effort. Other examples of non-contractible private benefits are community prestige, perquisite consumption, and various forms of wealth expropriation. In general, the incentive effect of such control benefits differs from that of managerial reputational capital, which leads us to target both in the empirical analysis below. A key prediction of the managerial conservatism hypothesis is that the probability of the CEO being rehired to run the restructured firm increases in her control benefits. Our empirical analysis distinguishes between inside and outside buyers in the auction, where the former represents a saleback to the old owner. Controlling for managerial quality, the key prediction is supported for inside buyers. For outside buyers, we find that the rehiring probability is increasing in managerial quality and is independent of CEO control benefits. The finding that buyers screen on CEO quality suggests that building a reputation for quality increases the expected value of the CEO's control benefits. If CEO quality and control benefits are in fact complementary, this incentive structure counteracts a tendency for private control benefits to induce value-reducing managerial entrenchment. We also find that bankruptcy filing results in a severe labor market disciplining of the CEO. Using tax return information, which reflects income from all sources (not just wage), we show a large decline in CEO income. The median income loss is −47% after controlling for the contemporaneous income change of CEOs of nonbankrupt industry rival firms of similar size. For outside buyers, and controlling for CEO quality, the income decline increases in CEO control benefits, possibly reflecting a concern with entrenchment. Our evidence of a large ex post settling-up effect in the CEO's wage is consistent with the argument of Fama (1980) that the CEO will tend toward firm-value maximization ex ante.2 Finally, we estimate post-bankruptcy performance of the auctioned firms. A high-risk strategy of “going for broke” arguably results in a stripped-down firm if it fails. The firm may have lost key employees and assets. Given that none of the sample firms is publicly traded, we use operating profitability and bankruptcy refiling rates to indicate the economic health of the firm's operations. The firms sold as going-concerns appear healthy as they typically perform at par with their industry rivals in the post-bankruptcy period.3 We also show that the bankruptcy refiling probability decreases with CEO control benefits and quality. Overall, our performance evidence indicates that buyers in the auction successfully screen on CEO quality, and it fails to support the risk-shifting hypothesis. The rest of the paper is organized as follows. In Section 2, we model CEO investment incentives during periods of severe financial distress and analyze the conditions under which control benefits induce managerial conservatism. This section also develops the paper's main testable hypotheses. Data sources and sample characteristics are described in Section 3. Section 4 presents our empirical analysis, and Section 5 concludes the paper.

We present a simple model demonstrating that CEO private benefits of control complement managerial reputation, compensation schemes, and financial contracts in counteracting costly shareholder risk-shifting incentives during financial distress. The implied managerial conservatism in project selection attenuates agency costs of debt and benefits shareholders ex ante. We take this model to a sample of bankruptcy filings in Sweden, where a filing summarily terminates managerial employment contracts and automatically puts the firm up for auction. The hard constraint on management makes this an ideal laboratory for examining the opposing theories of risk shifting and managerial conservatism prior to filing. While we do not have data on specific prefiling project choices or asset substitutions, the theory predicts that managerial concern with maintaining private benefits of control will manifest itself in the buyer's decision to rehire the CEO, the CEO income loss from filing, and the post-bankruptcy performance of the restructured firm. Our empirical analysis employs two factors representing private benefits of control and CEO quality reputation. The factors, which are constructed using a set of characteristics that are observable to the buyer in the bankruptcy auction, turn out to significantly determine the CEO rehiring probability, as predicted. Greater levels of control benefits increase the probability of a saleback of the firm to the old owner-manager. Moreover, we find that the probability that an external buyer will rehire the manager increases with the manager's quality reputation. Thus, the greater the managerial quality, the greater the expected value of her private control benefits. This incentive structure tends to alleviate concerns that private control benefits also promote managerial entrenchment. Using personal tax returns (publicly available in Sweden), we also are able to track the CEO's income after she leaves the firm. We find that a bankruptcy filing is a costly event: The median CEO income change around bankruptcy is −47% in excess of the contemporaneous income change for a control sample of CEOs of nonbankrupt firms matched on industry and firm size. The income loss of a filing CEO does not vary with our CEO quality factor. Thus, it does not appear that high-quality CEOs avoid the wrath of the labor market following bankruptcy filing. Conditional on CEO quality, the CEO income loss increases with the factor measuring private benefits of control provided the buyer is a company outsider. Thus, outside buyers tend to screen CEOs using estimates of both CEO quality and private control benefits. We also find that the firms emerging from the bankruptcy auction perform well. Post-bankruptcy operating profitability is at par with (healthy) industry rivals in every year over a five-year period following the auction. The firms’ growth rates in sales and total assets and in capital expenditures are at par or above that of industry rivals. We also find that the post-bankruptcy operating performance increases in our CEO quality factor. Greater control benefits and CEO quality reduces the probability that the firm will refile for bankruptcy over the years following the initial filing, suggesting reduced prefiling risk shifting. Overall, our results indicate that a bankruptcy filing in the Swedish automatic auction system is costly for the filing CEO and that the probability of the CEO maintaining her position depends on publicly available information about control benefits and quality. We conclude that the ex ante incentive effects of the managerial labor market transaction caused by bankruptcy filing help explain why the firms emerging from the bankruptcy auctions as going concerns are economically healthy. There is no empirical support for the alternative hypothesis that CEOs systematically run down distressed firms by means of costly risk-shifting and asset-stripping strategies to stay out of bankruptcy.