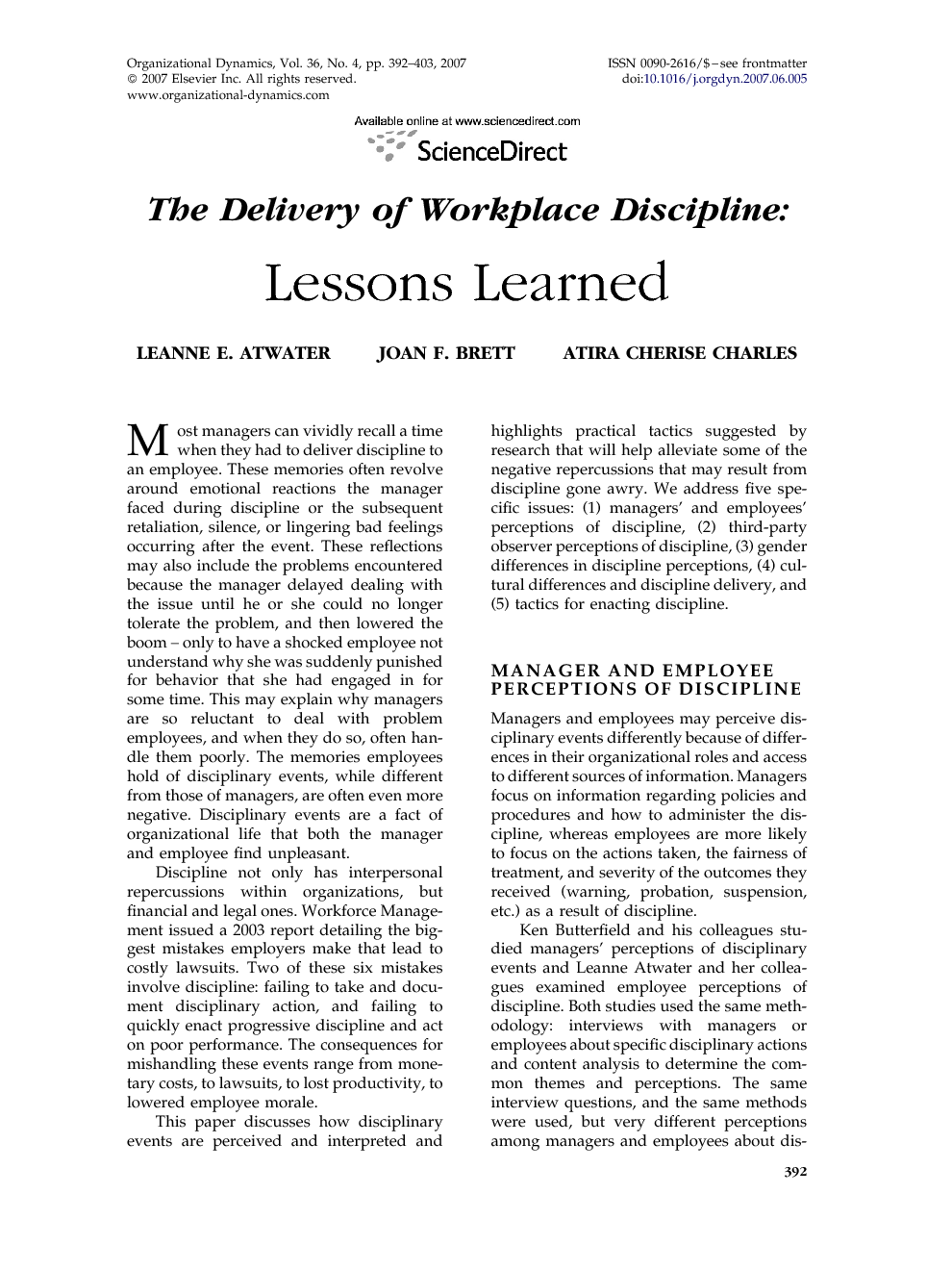 Most managers can vividly recall a time when they had to deliver discipline to an employee. These memories often revolve around emotional reactions the manager faced during discipline or the subsequent retaliation, silence, or lingering bad feelings occurring after the event. These reflections may also include the problems encountered because the manager delayed dealing with the issue until he or she could no longer tolerate the problem, and then lowered the boom – only to have a shocked employee not understand why she was suddenly punished for behavior that she had engaged in for some time. This may explain why managers are so reluctant to deal with problem employees, and when they do so, often handle them poorly. The memories employees hold of disciplinary events, while different from those of managers, are often even more negative. Disciplinary events are a fact of organizational life that both the manager and employee find unpleasant.

Discipline not only has interpersonal repercussions within organizations, but financial and legal ones. Workforce Management issued a 2003 report detailing the biggest mistakes employers make that lead to costly lawsuits. Two of these six mistakes involve discipline: failing to take and document disciplinary action, and failing to quickly enact progressive discipline and act on poor performance. The consequences for mishandling these events range from monetary costs, to lawsuits, to lost productivity, to lowered employee morale. This paper discusses how disciplinary events are perceived and interpreted and highlights practical tactics suggested by research that will help alleviate some of the negative repercussions that may result from discipline gone awry. We address five specific issues: (1) managers’ and employees’ perceptions of discipline, (2) third-party observer perceptions of discipline, (3) gender differences in discipline perceptions, (4) cultural differences and discipline delivery, and (5) tactics for enacting discipline. Manager and employee perceptions of discipline Managers and employees may perceive disciplinary events differently because of differences in their organizational roles and access to different sources of information. Managers focus on information regarding policies and procedures and how to administer the discipline, whereas employees are more likely to focus on the actions taken, the fairness of treatment, and severity of the outcomes they received (warning, probation, suspension, etc.) as a result of discipline. Ken Butterfield and his colleagues studied managers’ perceptions of disciplinary events and Leanne Atwater and her colleagues examined employee perceptions of discipline. Both studies used the same methodology: interviews with managers or employees about specific disciplinary actions and content analysis to determine the common themes and perceptions. The same interview questions, and the same methods were used, but very different perceptions among managers and employees about discipline events emerged. These two studies confirmed that while both managers and employees are participants in the disciplinary event, they have different cognitions and emotions that in turn influence their attitudes and behaviors. How Do Managers’ and Employees’ Perceptions Differ? Managers were much more likely to believe the punishment worked to change behavior and significantly less likely to report negative outcomes associated with the discipline. In contrast, over 90 percent of employees reported at least one negative outcome associated with the discipline. Even when employees reported that the discipline worked and their behavior improved or they corrected the problem, they also discussed negative outcomes from the discipline session, such as bad feelings toward their supervisor, job or organization. Consider the comments of a customer service representative who was reprimanded because he put himself at the end of an incoming call queue, which meant he answered fewer calls than his peers. “The discipline scared a lot of us into not doing it anymore. The negative outcomes were that there was a lot of anger built up towards the manager, and that is something that a lot of us will never forget, and someday down the road I just want to get her back and make her pay for it.” Even though the employee acknowledged his behavior was wrong and that he shouldn’t be taking shortcuts, he was still angry with the manager for taking disciplinary action. Managers were more likely to see the positive side of discipline, reporting that the employees’ behavior changed. They didn’t always recognize the negative effects that may accompany the disciplinary events and were unaware of the extent to which employees perceived the discipline to be unfair. When the interviews were coded, not a single manager reported that the recipient believed the discipline was unfair, while over half of recipients discussed unfairness of the discipline. A restaurant employee, suspended for three days for fighting on the job with a coworker, when asked if his behavior changed or improved after the discipline reported: “It changed, it didn’t improve. I felt during work that I just didn’t care no more. I didn’t care if I broke something. I didn’t care about anything. I just wanted to get through the day.” [until I could quit.] Another employee was told that her performance was below standard and she would not be getting an annual increase. When asked if her behavior changed she reported: “Yes, my behavior changed. I became very bitter because I felt I was treated unfairly. The negative outcome was that I did not want to work as hard for that person.”

Discipline is a fact of organizational life; the findings discussed here suggest tactics for making it a less painful one. • Managers and employees often perceive the discipline events differently. We suggest the manager follow up with the recipient to assess attitudes and motivation, offer reassurance that the problem can be solved, and express confidence in the employee that he or she can make the changes necessary. • Male and female supervisors are perceived differently in the delivery of discipline. Be sensitive to the need for female leaders to balance gender role expectations of nurturer with the leadership role expectations of discipliner. Use two-way communication in the discipline process, especially if you are a female manager. • The type of explanation provided for the same discipline consequence can play a role in how it is perceived and reacted to. An apology for the consequences on the individual can lessen anger and perceptions of unfairness as well as decrease negative perceptions of the manager. • Recognize that refusing to discuss the discipline will result in the greatest perceptions of unfairness and negative perceptions of the manager. • Deliver discipline in a way that makes it clear that the purpose is to help the employee in the long run. Venting or taking frustrations out on the employee will only lead to more negative consequences. • Managers may perceive positive results of a discipline event because they see the recipient's behavior change. Be aware of negative outcomes lurking beneath the surface and work to repair negative relationships. • Be aware that the Internet and new forms of electronic media provide a vehicle for employees to vent their perceptions of unfairness. These outlets emphasize the importance of fairness and emotional control. • Use caution in how discipline or termination events are handled in front of others. Actions that cast aspersions on the employee's character could lead to lawsuits. • Disciplining in private is important for managers to maintain respect. The message a manager intends to send to others by public discipline may not be the one they receive. • Be sensitive to cultural and individual differences. The same approach will not be equally effective with all individuals. Clearly, discipline is often called for in work settings and is unpleasant for both the deliverer and recipient. However, we have learned some interesting facts about the discipline process that may help managers increase the effectiveness of the process. We hope our observations and conclusions make this unpleasant but necessary task more effective.