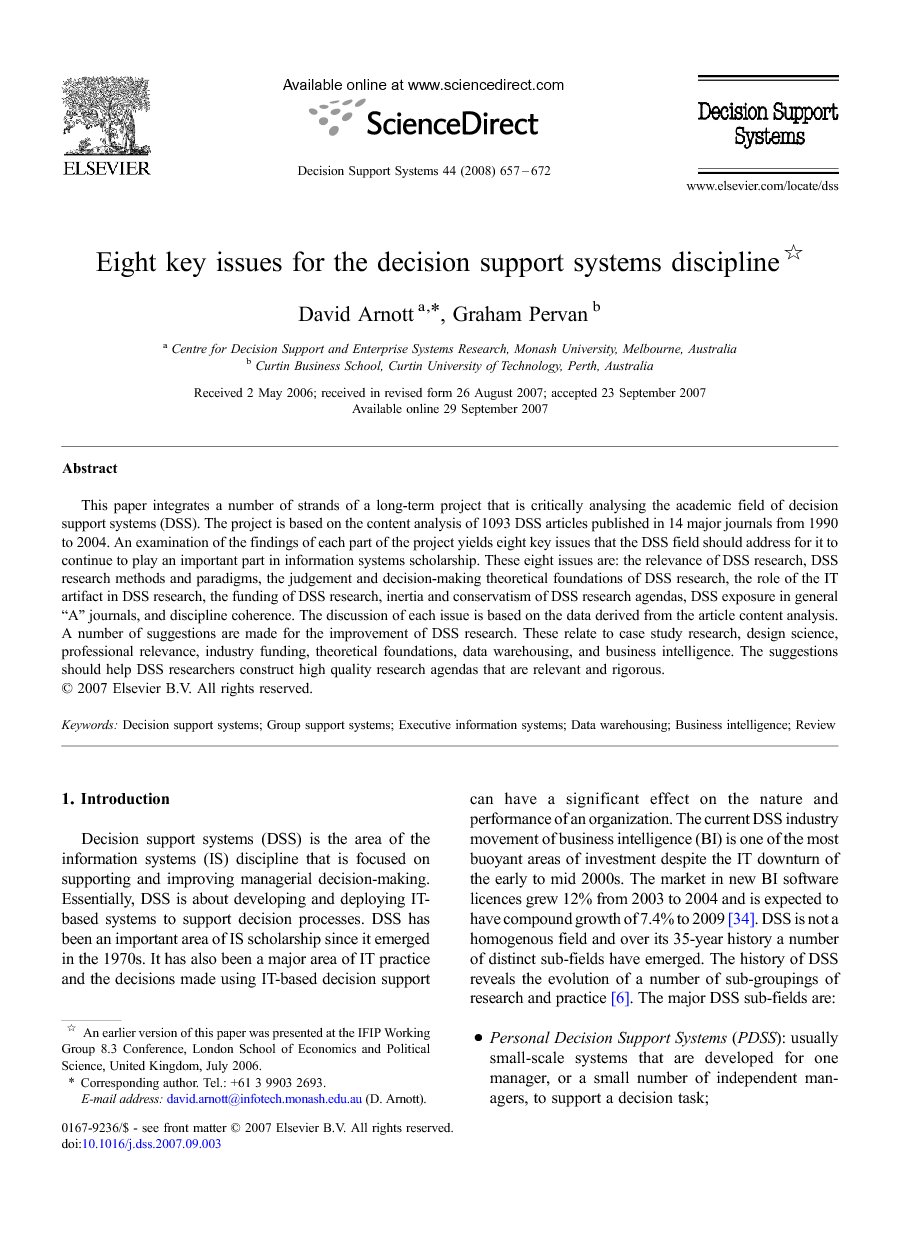 This paper integrates a number of strands of a long-term project that is critically analysing the academic field of decision support systems (DSS). The project is based on the content analysis of 1093 DSS articles published in 14 major journals from 1990 to 2004. An examination of the findings of each part of the project yields eight key issues that the DSS field should address for it to continue to play an important part in information systems scholarship. These eight issues are: the relevance of DSS research, DSS research methods and paradigms, the judgement and decision-making theoretical foundations of DSS research, the role of the IT artifact in DSS research, the funding of DSS research, inertia and conservatism of DSS research agendas, DSS exposure in general “A” journals, and discipline coherence. The discussion of each issue is based on the data derived from the article content analysis. A number of suggestions are made for the improvement of DSS research. These relate to case study research, design science, professional relevance, industry funding, theoretical foundations, data warehousing, and business intelligence. The suggestions should help DSS researchers construct high quality research agendas that are relevant and rigorous.

Decision support systems (DSS) is the area of the information systems (IS) discipline that is focused on supporting and improving managerial decision-making. Essentially, DSS is about developing and deploying IT-based systems to support decision processes. DSS has been an important area of IS scholarship since it emerged in the 1970s. It has also been a major area of IT practice and the decisions made using IT-based decision support can have a significant effect on the nature and performance of an organization. The current DSS industry movement of business intelligence (BI) is one of the most buoyant areas of investment despite the IT downturn of the early to mid 2000s. The market in new BI software licences grew 12% from 2003 to 2004 and is expected to have compound growth of 7.4% to 2009 [34]. DSS is not a homogenous field and over its 35-year history a number of distinct sub-fields have emerged. The history of DSS reveals the evolution of a number of sub-groupings of research and practice [6]. The major DSS sub-fields are: • Personal Decision Support Systems (PDSS): usually small-scale systems that are developed for one manager, or a small number of independent managers, to support a decision task; • Group Support Systems (GSS): the use of a combination of communication and DSS technologies to facilitate the effective working of groups; • Negotiation Support Systems (NSS): DSS where the primary focus of the group work is negotiation between opposing parties; • Intelligent Decision Support Systems (IDSS): the application of artificial intelligence techniques to decision support; • Knowledge Management-Based DSS (KMDSS): systems that support decision making by aiding knowledge storage, retrieval, transfer and application by supporting individual and organizational memory and inter-group knowledge access; • Data Warehousing (DW): systems that provide the large-scale data infrastructure for decision support; • Enterprise Reporting and Analysis Systems: enterprise focussed DSS including executive information systems (EIS), business intelligence (BI), and more recently, corporate performance management systems (CPM). BI tools access and analyze data warehouse information using predefined reporting software, query tools, and analysis tools [63]. Of these sub-fields, PDSS, Enterprise Reporting and Analysis Systems, and DW have had the most presence in practice. This paper integrates a number of strands of a long-term project that is critically analysing the academic field of DSS. The foundation of the project is the content analysis of 1093 DSS articles published in 14 major journals from 1990 to 2004. The first, descriptive, results were presented in Arnott, Pervan and Dodson [8]. Pervan, Arnott, and Dodson [72] presented a critical analysis of group support research from 1990 to 2003, while Arnott, Pervan and Dodson [7] analysed the funding of all types of DSS research. Pervan and Arnott [71] examined data warehousing and business intelligence research and Dodson, Arnott and Pervan [22] analysed the role of the system's client and user in DSS research. The major publication from the project to date, Arnott and Pervan [6], analysed published research in a number of dimensions including journal publishing patterns, research paradigms and methods, decision support focuses, professional relevance, and judgement and decision-making foundations. The aim of this paper is to integrate the findings of the strands of the project into a set of key issues that can assist DSS researchers in the development of research agendas that are important for both theory and practice. This paper is structured as follows: first, the project's research method and design is described. This is followed by the identification of the key issues that have emerged from the various strands of the project. Each key issue is discussed in turn, following which suggestions for the improvement of DSS research are made, the limitations of the research outlined, and the future directions of the project are discussed.