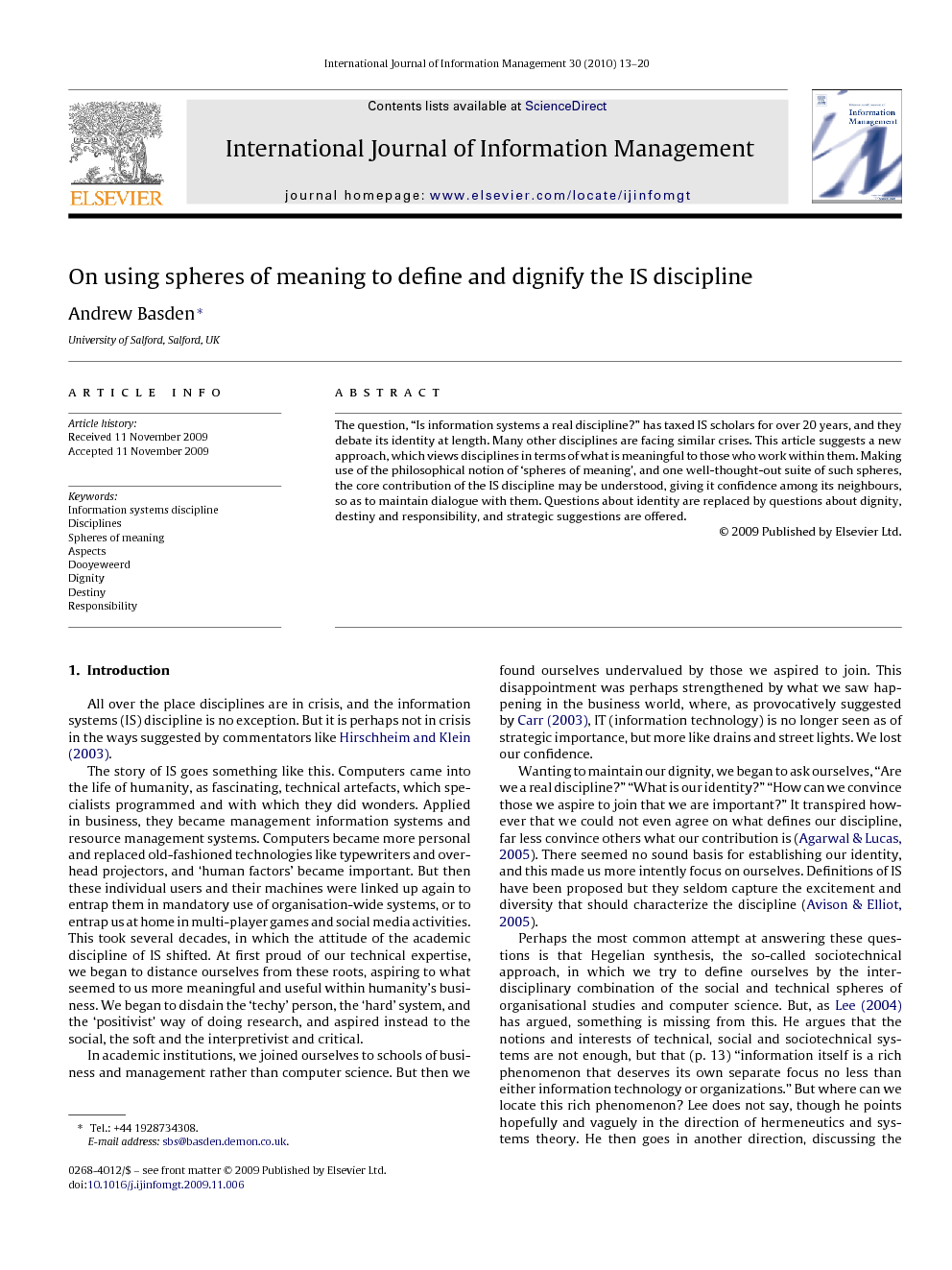 The question, “Is information systems a real discipline?” has taxed IS scholars for over 20 years, and they debate its identity at length. Many other disciplines are facing similar crises. This article suggests a new approach, which views disciplines in terms of what is meaningful to those who work within them. Making use of the philosophical notion of ‘spheres of meaning’, and one well-thought-out suite of such spheres, the core contribution of the IS discipline may be understood, giving it confidence among its neighbours, so as to maintain dialogue with them. Questions about identity are replaced by questions about dignity, destiny and responsibility, and strategic suggestions are offered.

All over the place disciplines are in crisis, and the information systems (IS) discipline is no exception. But it is perhaps not in crisis in the ways suggested by commentators like Hirschheim and Klein (2003). The story of IS goes something like this. Computers came into the life of humanity, as fascinating, technical artefacts, which specialists programmed and with which they did wonders. Applied in business, they became management information systems and resource management systems. Computers became more personal and replaced old-fashioned technologies like typewriters and overhead projectors, and ‘human factors’ became important. But then these individual users and their machines were linked up again to entrap them in mandatory use of organisation-wide systems, or to entrap us at home in multi-player games and social media activities. This took several decades, in which the attitude of the academic discipline of IS shifted. At first proud of our technical expertise, we began to distance ourselves from these roots, aspiring to what seemed to us more meaningful and useful within humanity's business. We began to disdain the ‘techy’ person, the ‘hard’ system, and the ‘positivist’ way of doing research, and aspired instead to the social, the soft and the interpretivist and critical. In academic institutions, we joined ourselves to schools of business and management rather than computer science. But then we found ourselves undervalued by those we aspired to join. This disappointment was perhaps strengthened by what we saw happening in the business world, where, as provocatively suggested by Carr (2003), IT (information technology) is no longer seen as of strategic importance, but more like drains and street lights. We lost our confidence. Wanting to maintain our dignity, we began to ask ourselves, “Are we a real discipline?” “What is our identity?” “How can we convince those we aspire to join that we are important?” It transpired however that we could not even agree on what defines our discipline, far less convince others what our contribution is (Agarwal & Lucas, 2005). There seemed no sound basis for establishing our identity, and this made us more intently focus on ourselves. Definitions of IS have been proposed but they seldom capture the excitement and diversity that should characterize the discipline (Avison & Elliot, 2005). Perhaps the most common attempt at answering these questions is that Hegelian synthesis, the so-called sociotechnical approach, in which we try to define ourselves by the interdisciplinary combination of the social and technical spheres of organisational studies and computer science. But, as Lee (2004) has argued, something is missing from this. He argues that the notions and interests of technical, social and sociotechnical systems are not enough, but that (p. 13) “information itself is a rich phenomenon that deserves its own separate focus no less than either information technology or organizations.” But where can we locate this rich phenomenon? Lee does not say, though he points hopefully and vaguely in the direction of hermeneutics and systems theory. He then goes in another direction, discussing the prevalence of inductive positivism in IS, which offers little help to us. We might do well to try to understand what is this ‘rich phenomenon’. Various ways have been attempted, involving empirical studies of IS literature or activity, and analysis of the core of the discipline. The discussion of these is brief and illustrative rather than exhaustive, because its aim is merely to situate the rather different approach which is introduced for the first time here. A fuller comparison must wait for another time. This approach proposed here employs philosophy, but does not delve too deeply into philosophy itself. It makes use of the ‘everyday’ philosophical notion of spheres of meaning to suggest how we might find a central focus that provides both dignity and destiny, and suggests how the IS discipline can relate to other disciplines by way of responsible application, foundation and anticipation. A concern with dignity, destiny and responsibility replaces concern with identity, though an identity may be forged by reference to these. This paper does not assume that IS currently is a discipline, but rather discusses what direction we need to take if IS were to be a discipline. The concepts of science, discipline and field will be used as follows. Both science and discipline involve specialised knowledge, but whereas science is concerned with abstracting from everyday life in order to formulate generic knowledge, a discipline employs the knowledge in the service of everyday life in an orderly manner and with some normative direction. A discipline involves both research and practice. ‘Field’ here is used to indicate an area of study or practice that is somewhat smaller and narrower than a discipline. The link with everyday experience is important (‘everyday’ can include work as well as non-work life) because it implies that any attempt to understand a discipline must take a pre-theoretical rather than theoretical attitude in so doing. A theoretical attitude approaches with a lens that abstracts certain aspects (Clouser, 2005), focusing attention solely on these, and as a consequence filters out many others. A pre-theoretical attitude, by contrast, is open to the diversity of aspects that are meaningful in the discipline, while also recognising something of its unity. ‘We’ in this paper refers to researchers and practitioners in the IS discipline. But the principles discussed could be extended to any other discipline.