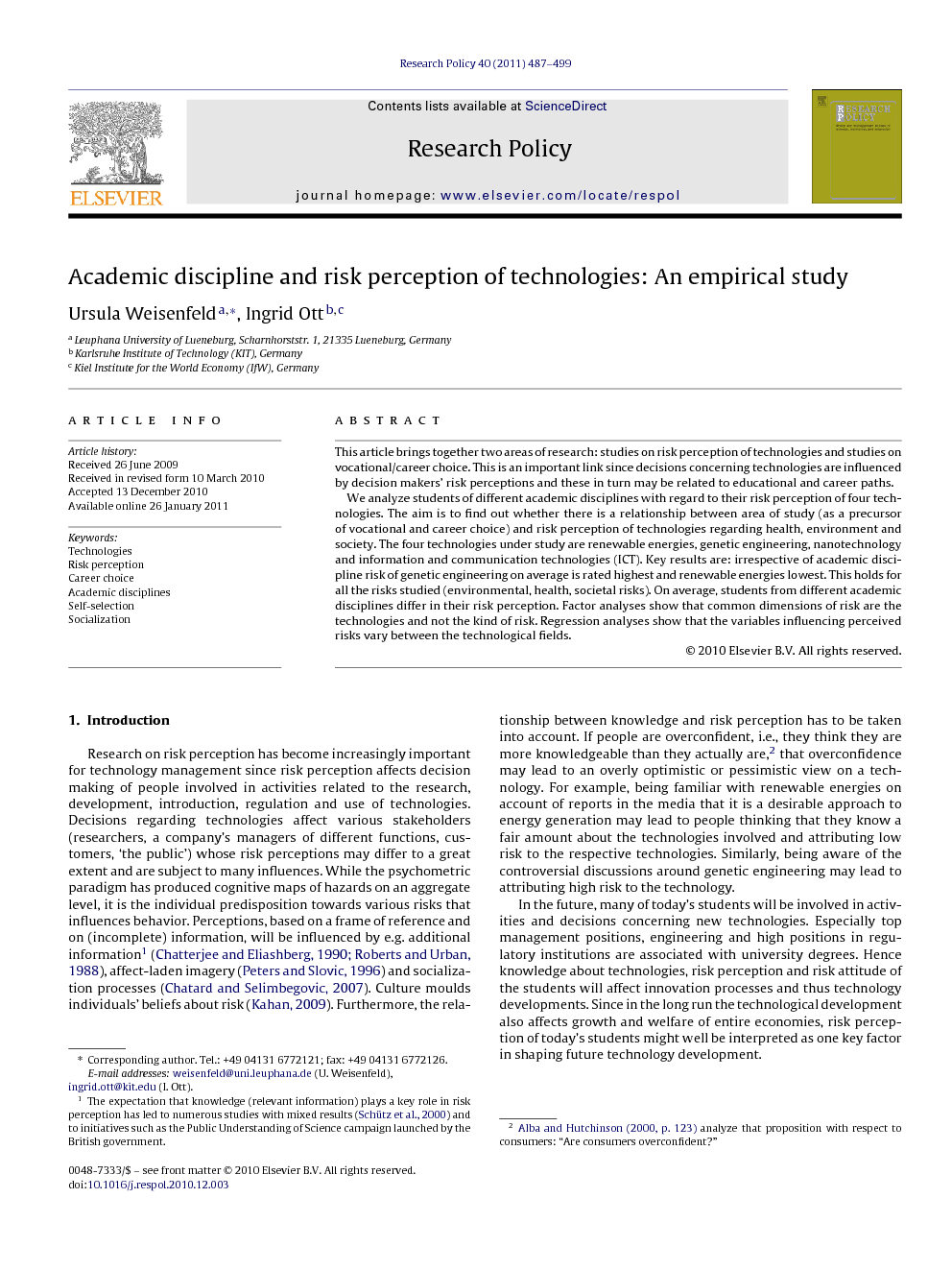 This article brings together two areas of research: studies on risk perception of technologies and studies on vocational/career choice. This is an important link since decisions concerning technologies are influenced by decision makers’ risk perceptions and these in turn may be related to educational and career paths. We analyze students of different academic disciplines with regard to their risk perception of four technologies. The aim is to find out whether there is a relationship between area of study (as a precursor of vocational and career choice) and risk perception of technologies regarding health, environment and society. The four technologies under study are renewable energies, genetic engineering, nanotechnology and information and communication technologies (ICT). Key results are: irrespective of academic discipline risk of genetic engineering on average is rated highest and renewable energies lowest. This holds for all the risks studied (environmental, health, societal risks). On average, students from different academic disciplines differ in their risk perception. Factor analyses show that common dimensions of risk are the technologies and not the kind of risk. Regression analyses show that the variables influencing perceived risks vary between the technological fields.

Research on risk perception has become increasingly important for technology management since risk perception affects decision making of people involved in activities related to the research, development, introduction, regulation and use of technologies. Decisions regarding technologies affect various stakeholders (researchers, a company's managers of different functions, customers, ‘the public’) whose risk perceptions may differ to a great extent and are subject to many influences. While the psychometric paradigm has produced cognitive maps of hazards on an aggregate level, it is the individual predisposition towards various risks that influences behavior. Perceptions, based on a frame of reference and on (incomplete) information, will be influenced by e.g. additional information1 (Chatterjee and Eliashberg, 1990 and Roberts and Urban, 1988), affect-laden imagery (Peters and Slovic, 1996) and socialization processes (Chatard and Selimbegovic, 2007). Culture moulds individuals’ beliefs about risk (Kahan, 2009). Furthermore, the relationship between knowledge and risk perception has to be taken into account. If people are overconfident, i.e., they think they are more knowledgeable than they actually are,2 that overconfidence may lead to an overly optimistic or pessimistic view on a technology. For example, being familiar with renewable energies on account of reports in the media that it is a desirable approach to energy generation may lead to people thinking that they know a fair amount about the technologies involved and attributing low risk to the respective technologies. Similarly, being aware of the controversial discussions around genetic engineering may lead to attributing high risk to the technology. In the future, many of today's students will be involved in activities and decisions concerning new technologies. Especially top management positions, engineering and high positions in regulatory institutions are associated with university degrees. Hence knowledge about technologies, risk perception and risk attitude of the students will affect innovation processes and thus technology developments. Since in the long run the technological development also affects growth and welfare of entire economies, risk perception of today's students might well be interpreted as one key factor in shaping future technology development. Earlier studies have shown that students in various academic disciplines differ regarding motives, career expectations and cognitive abilities (Windolf, 1995), socio-political attitudes (Haley and Sidanius, 2005) or (political) worldviews (Kemmelmeier et al., 2005). We propose that those expectations and worldviews may relate to risk perceptions and thus, students choosing different topics at a university will differ with regard to their perceptions and attitudes of technologies (self-selection) and that within an area of study, risk perception will be different between beginners and advanced students (socialization). This article addresses antecedents of potential actors’ and stakeholders’ behavior by analyzing the effects of self-selection into an academic discipline and subsequent socialization on the perceived risks of four important new technologies: renewable energies, genetic engineering, nanotechnologies, and ICT. These technologies are part of the so-called high technologies sector. They are key change drivers and possible convergence of them is expected to “bring about tremendous improvements in transformative tools, generate new products and services, enable opportunities to meet and enhance human potential and social achievements, and in time reshape societal relationships” (Roco, 2007, see also Lipsey et al., 1998). For each technology we distinguish between risks in three areas: health, environment, and society. The analysis focuses on student groups in Germany. They all have acquired a certain educational degree (usually ‘Abitur’ or ‘Fachabitur’, a prerequisite to enrol at university or polytechnic) that makes them a more homogeneous group regarding knowledge compared to the general public, thereby providing the opportunity to look for other influencing factors on risk perception. The analysis differentiates between students in several academic disciplines (i.e. with different majors), namely Cultural Sciences, Business Administration and Economics, Social Work, Environmental Sciences, Teaching, and Technical Studies (engineering), on the one hand, as well as between first term students (beginners) and advanced students, on the other hand. The remainder of the paper is as follows. Section 2 summarizes key findings in the area of risk perception and Section 3 describes vocational or career choice and the associated processes of self-selection and socialization as potentially important factors in the explanation of attitudes and behaviours. Section 4 gives a short description of the four technologies investigated here. Section 5 presents the empirical study and Section 6 provides a discussion of results. Section 7 draws conclusions.

In our study we considered and combined elements of inter-hazard, inter-group and inter-individual variation of risk perception. Analyzing technologies that differ on the dimensions ‘dread’ and ‘familiarity’, we expected to find differences between the technologies. Results of both factor analysis and regression analyses support this. Analysis of risk perception variables resulted in four ‘technology factors’ each representing one technology (rather than ‘health’, ‘environment’ and ‘society’ factors), and regression analyses showed that the independent variables not only vary in their level of influence but in the structure of influence on risk perception, depending on the technology investigated. Instead of assessing worldviews and risk perceptions in one questionnaire (thereby risking inflated coefficients), we used pre-defined groups and compared risk perceptions amongst academic disciplines. Results support our proposition that this kind of self-selection (and associated type of personality) is partly reflected in perceptions concerning risks. People are exposed to information and fit this into their frame of mind, they select and interpret additional information and may develop a view on how well informed they are. These inter-individual differences of self-assessed knowledge and factual knowledge may contribute to differences in risk perception. In our study, the influence of knowledge on risk perception varies between technologies: in the case of nanotechnology, factual knowledge is negatively related to risk perception, in the case of genetic engineering, self-assessed knowledge is positively related to risk perception. Thus, the relationship between knowledge and technological development is not straightforward. Participating in the creation of technological paths, people's intentions, strategies and actions are partly influenced by how chances and risks of the technology are perceived: risk perception plays a crucial role in technology development. It is not only “science and mathematics” but equally an understanding of risks and chances and the way perceptions develop that could “bring science and technology closer to certain categories of people who are less exposed to the scientific field, and who therefore have a more skeptic perception of science and technology” (Eurobarometer, 2005, p. 125). Students select themselves into an ongoing learning process and choose a field of study. This self-selection partly will reflect attitudes towards science, preferences for topics and career expectations. Going to university, the teaching and learning of subjects become less uniform. Each discipline has its own culture and its ways for producing and using knowledge. Socialization processes may contribute to the development of ‘typical’ perceptions, however, it seems that self-selection effects are key to attitudes and that socialization only plays a minor role. In an organization people take on roles and tasks: a financial controller, a researcher and a marketing manager differ in their screening and evaluation of innovations and in their level and type of information. In general, scientists and developers may be better informed about technical aspects, marketing managers may be better informed about user needs and usage patterns. Homophily (Lazarsfeld and Merton, 1954) between members of a group (or a department in an organization) may strengthen attitudes and confirm perceptions. This may affect intra-organizational interaction between managers of different departments as well as inter-organizational interaction. For example, Kim and Higgins (2007, p. 510) propose that “the prominence of members’ prior careers influenced the rate at which companies form alliances”. It is this kind of knowledge about selection and socialization processes that could further the understanding of cooperation partners’ perceptions as well as the ability to deal with differences in perceptions. Future research could involve investigating the link between academic discipline and world view and a panel study to monitor socialization effects on an intra-individual level.