عنوان انگلیسی
Whose rights? Professional discipline and the incorporation of a (human) rights framework: The case of ICAS
دانلود فوری مقاله + سفارش ترجمه 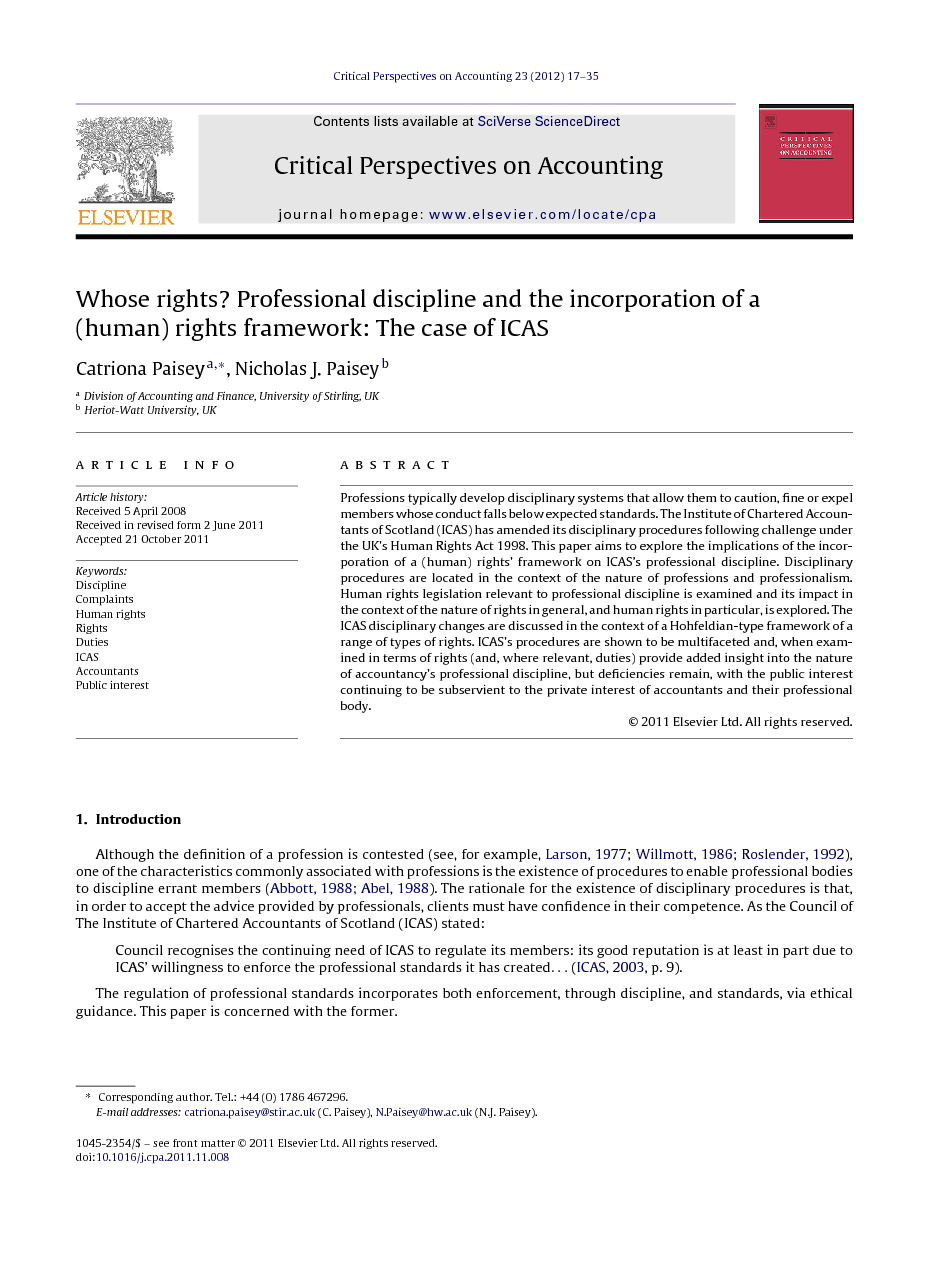 Professions typically develop disciplinary systems that allow them to caution, fine or expel members whose conduct falls below expected standards. The Institute of Chartered Accountants of Scotland (ICAS) has amended its disciplinary procedures following challenge under the UK's Human Rights Act 1998. This paper aims to explore the implications of the incorporation of a (human) rights’ framework on ICAS's professional discipline. Disciplinary procedures are located in the context of the nature of professions and professionalism. Human rights legislation relevant to professional discipline is examined and its impact in the context of the nature of rights in general, and human rights in particular, is explored. The ICAS disciplinary changes are discussed in the context of a Hohfeldian-type framework of a range of types of rights. ICAS's procedures are shown to be multifaceted and, when examined in terms of rights (and, where relevant, duties) provide added insight into the nature of accountancy's professional discipline, but deficiencies remain, with the public interest continuing to be subservient to the private interest of accountants and their professional body.

Although the definition of a profession is contested (see, for example, Larson, 1977, Willmott, 1986 and Roslender, 1992), one of the characteristics commonly associated with professions is the existence of procedures to enable professional bodies to discipline errant members (Abbott, 1988 and Abel, 1988). The rationale for the existence of disciplinary procedures is that, in order to accept the advice provided by professionals, clients must have confidence in their competence. As the Council of The Institute of Chartered Accountants of Scotland (ICAS) stated: Council recognises the continuing need of ICAS to regulate its members: its good reputation is at least in part due to ICAS’ willingness to enforce the professional standards it has created… (ICAS, 2003, p. 9). The regulation of professional standards incorporates both enforcement, through discipline, and standards, via ethical guidance. This paper is concerned with the former. In the UK, the professions have historically regulated themselves1 although current developments in medicine2 and law3 show that the concept of self-regulation has been altered by the imposition of a statutory framework designed to offer a more independent procedure to encourage public confidence. The UK's accountancy profession has historically been self-regulating although this has recently been modified by the development of a statutory framework (provided through the Companies Acts 1985, 1989 and 2006, the Financial Services Act 1986 and the Insolvency Act 1986) which imposes new legal duties upon the profession. Given the trend towards increasing scrutiny of the professions, self-regulatory regimes that operate in camera, with a majority of members of the professional body judging the work of fellow members, look increasingly incestuous and potentially raise human rights concerns. Within the accounting literature, disciplinary procedures have been criticised for being more effective in protecting the private interests of individual accountants and their professional bodies than the interests of their clients and the wider public (see, for example, Briloff, 1978, Canning and O’Dwyer, 2001, Canning and O’Dwyer, 2003, Canning and O’Dwyer, 2006, Sikka, 2001 and Mitchell and Sikka, 2004). The disciplinary procedures of ICAS were modified in 2004 following challenge under the Human Rights Act 1998 (HRA 1998). As shall be discussed later, a small number of members, who had been the subject of recent complaint, claimed that the old ICAS disciplinary procedures system breached their right to a fair trial enshrined in the HRA 1998 because they were not independent and did not offer the opportunity for hearings to be held in public4. The ICAS rule changes are important because they were motivated, at least in part, by a desire to protect ICAS against future claims on human rights grounds. This paper aims to contribute to the literature on the accountancy profession's disciplinary procedures by exploring the implications of the incorporation of a human rights framework on professional discipline, with specific reference to the disciplinary procedures of ICAS. The paper is organised as follows. First, the accounting literature on professional regulation and discipline is examined in order to provide a context for the ensuing discussion. Second, in order to provide a theoretical framework for the paper, the implications of a human rights framework are discussed. This paper locates the discussion of human rights within a more general discussion of rights, viewing human rights as a specific subset of rights. Third, the UK accountancy profession's disciplinary procedures are discussed, distinguishing between the unified procedure used for public interest cases and the individual procedures adopted by the various professional bodies, such as ICAS, for non-public interest cases. The ICAS review includes examination of the ICAS procedures that existed prior to 2004, the reasons for change and the new procedures. Fourth, drawing on the first three sections, the implications of the incorporation of a rights, including human rights, framework on the disciplinary procedures of ICAS are explored. The Hohfeldian model is commonly used in legal studies but has not been discussed within the accounting literature on professional discipline. This paper aims to add to the accounting literature by drawing on ideas from legal studies in order to explore the rights of the various stakeholders in the accounting relationship. To conclude, the paper assesses the extent to which the amended ICAS disciplinary procedures have addressed the concerns expressed in the research literature regarding professional regulation.