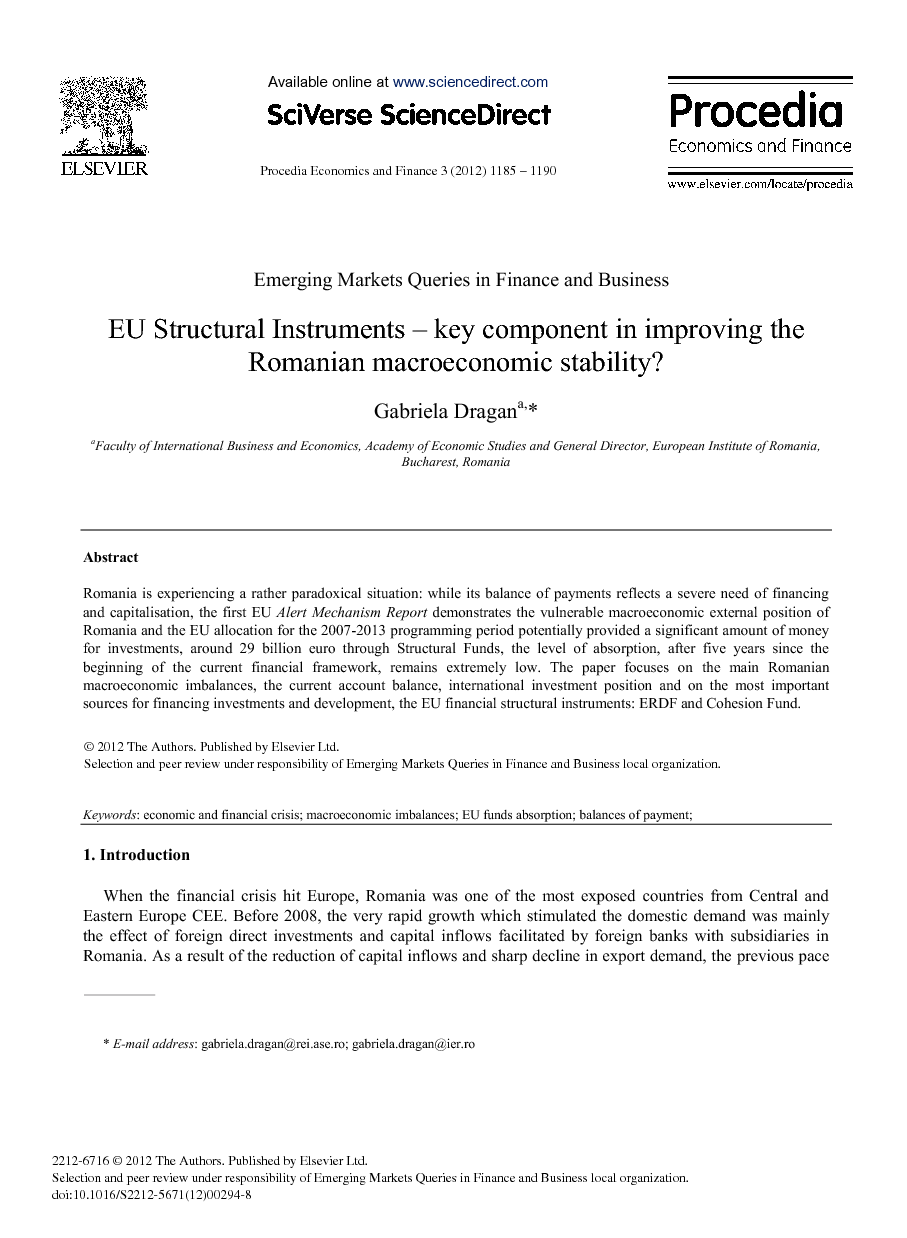 Romania is experiencing a rather paradoxical situation: while its balance of payments reflects a severe need of financing and capitalisation, the first EU Alert Mechanism Report demonstrates the vulnerable macroeconomic external position of Romania and the EU allocation for the 2007-2013 programming period potentially provided a significant amount of money for investments, around 29 billion euro through Structural Funds, the level of absorption, after five years since the beginning of the current financial framework, remains extremely low. The paper focuses on the main Romanian macroeconomic imbalances, the current account balance, international investment position and on the most important sources for financing investments and development, the EU financial structural instruments: ERDF and Cohesion Fund.

When the financial crisis hit Europe, Romania was one of the most exposed countries from Central and Eastern Europe CEE. Before 2008, the very rapid growth which stimulated the domestic demand was mainly the effect of foreign direct investments and capital inflows facilitated by foreign banks with subsidiaries in Romania. As a result of the reduction of capital inflows and sharp decline in export demand, the previous paceof growth has proved unsustainable and a very severe recession hit Romanian economy in the late of 2008 Dragan,G., 2011. In order to avoid a possible banking sector collapses in CEE, the EU, the IMF and other International Financial Institutions EBRD, EIB and the World Bank Group created a new financial facility called EU Balance of Payment Facility BOPF. Consequently, Romania, Hungary and Latvia, all of them noneuro EU member-states facing problems resulting from unusual combination of external shocks and domestic policy mistakes , received a common financial support package of billion. Romania signed its first agreement of multilateral financial assistance in May 2009 for an overall amount of 20 billion euro and an additional one in May 2011, for around 5 billion euro. The first Alert Mechanism Report on macroeconomic imbalances in the EU member states, published by the European Commission in February 2012, demonstrates the vulnerable macroeconomic external position of Romania, which surpasses the indicative threshold in three out of ten indicators, all of them from the area of external imbalances and competitiveness. However, although the FDI inflows in Romania have decreased due to prolonged economic recession of Western Europe, the EU funds allocated to our country for the 2007-2013 financial period should have had a visible impact on the Romanian BoP, offsetting this drop and supporting the external sustainability of the country. Unfortunately, the contracted and payment ratio are still very low in Romania comparing with the CEE average. Romania poor absorption of EU funds represents a multifaceted reality, the causes ranging from a weak administrative capacity, managing structures and rules too complicated, inefficient procedures, institutions, etc., to the lack of co-financing, respectively of guaranteeing the national contribution, as a result of an acute shortage of financial resources both for public and private co-financing investments.

Dealing with severe internal structural problems nefficient institutions and economy, demographic decline, etc. and a poor crisis management one of the most debated measure during the first stateges of the crises, the cut of salaries for the public sector, has mainly determined a sharp reduction of purchasing power and living standards of the population, reduction of internal demand and, finally, deepening of the crisis, the time is now for Romania to rediscover the utility of the EU Structural Funds.