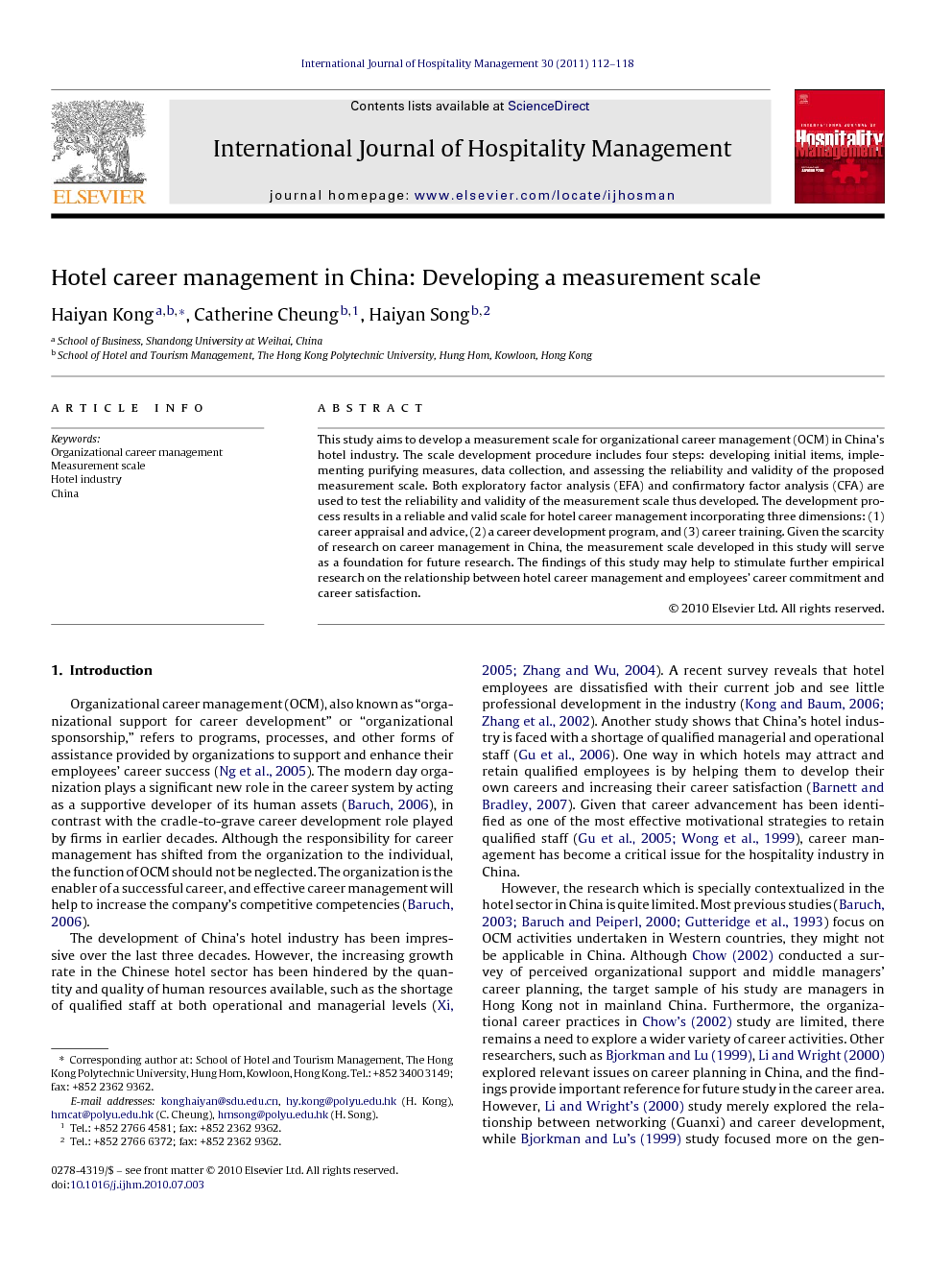 Organizational career management (OCM), also known as “organizational support for career development” or “organizational sponsorship,” refers to programs, processes, and other forms of assistance provided by organizations to support and enhance their employees’ career success (Ng et al., 2005). The modern day organization plays a significant new role in the career system by acting as a supportive developer of its human assets (Baruch, 2006), in contrast with the cradle-to-grave career development role played by firms in earlier decades. Although the responsibility for career management has shifted from the organization to the individual, the function of OCM should not be neglected. The organization is the enabler of a successful career, and effective career management will help to increase the company's competitive competencies (Baruch, 2006). The development of China's hotel industry has been impressive over the last three decades. However, the increasing growth rate in the Chinese hotel sector has been hindered by the quantity and quality of human resources available, such as the shortage of qualified staff at both operational and managerial levels (Xi, 2005 and Zhang and Wu, 2004). A recent survey reveals that hotel employees are dissatisfied with their current job and see little professional development in the industry (Kong and Baum, 2006 and Zhang et al., 2002). Another study shows that China's hotel industry is faced with a shortage of qualified managerial and operational staff (Gu et al., 2006). One way in which hotels may attract and retain qualified employees is by helping them to develop their own careers and increasing their career satisfaction (Barnett and Bradley, 2007). Given that career advancement has been identified as one of the most effective motivational strategies to retain qualified staff (Gu et al., 2005 and Wong et al., 1999), career management has become a critical issue for the hospitality industry in China. However, the research which is specially contextualized in the hotel sector in China is quite limited. Most previous studies (Baruch, 2003, Baruch and Peiperl, 2000 and Gutteridge et al., 1993) focus on OCM activities undertaken in Western countries, they might not be applicable in China. Although Chow (2002) conducted a survey of perceived organizational support and middle managers’ career planning, the target sample of his study are managers in Hong Kong not in mainland China. Furthermore, the organizational career practices in Chow's (2002) study are limited, there remains a need to explore a wider variety of career activities. Other researchers, such as Bjorkman and Lu (1999), Li and Wright (2000) explored relevant issues on career planning in China, and the findings provide important reference for future study in the career area. However, Li and Wright's (2000) study merely explored the relationship between networking (Guanxi) and career development, while Bjorkman and Lu's (1999) study focused more on the general human resources management rather than the specific career management. China's hotel industry displays characteristics of fierce competition, and multiform ownership and management systems (Pine, 2002). The hotel industry in China was characterized by diverse ownerships, namely state-owned, collective, private, alliance, stock, foreign-invested and Hong Kong, Macao, and Taiwan-invested hotels (CNTA, 2007). Of all the ownership types, state-owned hotels are by far still the dominant force, consisting of more than 42.7% of the total hotels in China. Although the hotels in China, such as state-owned hotels have successfully developed and innovated their management practices by combining international management skills with Chinese culture (Cai et al., 2000), it still takes time for them to practice comprehensive career management activities as the hotel management system in China is still immature. Furthermore, although hotels in China may adopt career management practices from western country, it remains difficult to implement effective career management strategies in the Chinese context due to the lack of professional trainers and special cultural influences (Bjorkman and Lu, 1999). For example, the role of ‘face’ and harmony are significant aspects of social life in China (Bond, 1991). As most Chinese managers tended to minimize the loss of face and preserve harmonious relationships, the issue of face may complicate the process of employees’ performance appraisal. During the interviews of this study, it is also found that written personal career planning has not been implemented in China. This is because Chinese manager do not prefer to write everything clear in black and white. It is therefore necessary to explore how career management is handled in the Chinese hotel sector and develop a new scale that captures hotel career management in China.

In this paper, we sought to develop a three-dimensional measurement scale for OCM activities in China's hotel industry following the accepted scale development procedure (see Fig. 1). A total of 13 items were identified and their reliability and validity were tested. All alpha coefficients for the data exceeded the minimum standard for reliability, suggesting a high level of internal consistency for each construct. Both convergent validity and discriminate validity were satisfactory, suggesting that all measurement items closely represent conceptually meaningful constructs. Our findings show that the proposed measurement scale for hotel career management activities in China is both reliable and valid. The results of this study may provide both theoretical and practical implications. Theoretically, this study provides a comprehensive view of career activities in China, and develops a measurement of OCM in the Chinese setting, an important emerging market. Given the scarcity of relevant information on career management, and distinct characteristics of HRM in the hotel industry in China, the measurement developed in the current study will then serve as a platform for future studies. The findings of this study will also work as a reference for researches relating to OCM. Modern organizations play an important role in the career system by acting as supportive developers of their human assets (Baruch, 2006). It is therefore important to explore the function of hotel career management in enhancing employees’ career competencies. This study may help to stimulate further empirical research on the relationship between hotel career management and employees’ career competencies and career satisfaction. Hence, the clearly defined construct and resulting scale in this study will provide useful reference for future researchers’ investigations on this important topic of career management. Practically, the findings of this study provide sufficient information to hotel operators and decision makers on hotel career management. Given the rapid development of the hospitality industry in China, career management should be an important issue in strategic human resources management. For hotel HR managers in particular, an application of the scale can provide them with detailed information on career activities to meet the employees’ career need and expectation. Furthermore, with the rapid development of the hotel industry in China, many international and multinational companies have opened hotels in China and will compete for scare managerial resources in the market. The development of a valid and reliable tool of career management can assist both Chinese and multinational stakeholders to better understand the reality of career planning and to develop effective strategies to attract and retain qualified talents. In the three dimensions identified, career training is an important factor of OCM. Based on the means of the factors, training programs are found to be the most commonly practiced OCM activity, followed by career appraisal and development programs. The findings are consistent with those of previous research (Kong et al., 2010) and further highlight the importance of career training in the hotel industry in China (Baum, 2007, Dewald and Self, 2008 and Kong and Baum, 2006). Employees are eager to be educated and empowered with further training. Hence, it is critical for hotel managers to conduct various kinds of training programs in addition to pre-job and on-the-job training. As career training plays an important role in career development, it should be offered together with other career development activities to address the long-term career aspirations of employees. Career appraisal system is commonly considered to be a dimension of OCM. Gutteridge et al. (1993) propose six OCM factors, among which two are related to career appraisal (assessment). This is because career appraisal or assessment centers have been found to be a reliable and valid tool for career management (Baruch, 2003). In this study, a high correlation is found between career appraisal and career development. This is because hotels in China have relatively comprehensive appraisal systems and use performance appraisal as a basis for employees’ career planning and further promotion. For example, most hotels conduct 360° appraisal, which includes the appraisals given by the direct manager, peers, assessment committee, or a combination of several sources, and upward appraisal (Baruch, 2003). As career counseling by managers and mentoring are also positively related to skill development among employees (Chao et al., 1992 and Williams et al., 2009), these activities should be considered to further evaluate the potential of present or future managers. Career development programs are a well-recognized dimension of OCM (Gutteridge, 1986 and Gutteridge et al., 1993). In this study, job postings are ranked the highest among all development activities. This indicates that most hotels in China favor internal promotion over recruitment from outside the company. Information on job vacancies is published on the Internet, newsletters, or hotel notice boards. Compared with other career development activities, dual ladders are less common. As career development is one of the greatest motivators among hotel employees (Wong et al., 1999), a regular career appraisal program, development system, and training activities could help hotels in China to attract and retain qualified hotel staff. The limitation of this study is that the data were collected based on convenience sampling. This means participants are selected according to their convenient accessibility, which indicates there is likely bias in the sample. However, as participants are from hotels in different parts of China, they may reflect a reasonable broad of representatives.