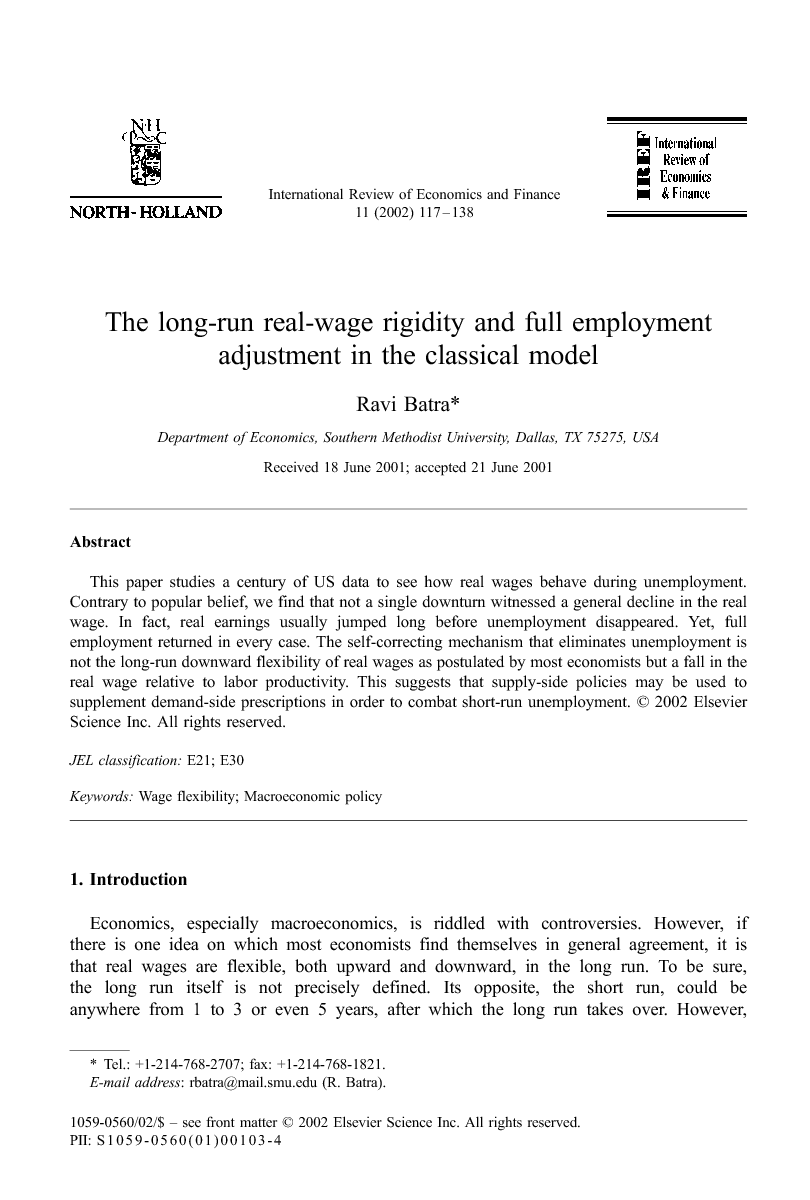 This paper studies a century of US data to see how real wages behave during unemployment. Contrary to popular belief, we find that not a single downturn witnessed a general decline in the real wage. In fact, real earnings usually jumped long before unemployment disappeared. Yet, full employment returned in every case. The self-correcting mechanism that eliminates unemployment is not the long-run downward flexibility of real wages as postulated by most economists but a fall in the real wage relative to labor productivity. This suggests that supply-side policies may be used to supplement demand-side prescriptions in order to combat short-run unemployment.

Economics, especially macroeconomics, is riddled with controversies. However, if there is one idea on which most economists find themselves in general agreement, it is that real wages are flexible, both upward and downward, in the long run. To be sure, the long run itself is not precisely defined. Its opposite, the short run, could be anywhere from 1 to 3 or even 5 years, after which the long run takes over. However, few question the notion that real wages are perfectly flexible once we cross the realm of the short period. Broadly speaking, there are two schools of thought in macroeconomics—Keynesians (the activists) and classicals (the nonactivists). The two differ in their views about the short run, but as Abel and Bernanke (1995) remark in emphatic italics, Keynesians and classicals both agree that in the long run prices and wages fully adjust to achieve equilibrium in the markets for goods, assets, and labor. In other words, “Complete flexibility of wages and prices in the long run is not controversial” (p. 22). Wage-price flexibility is also commonly identified as the automatic or self-correcting mechanism that preserves full employment of labor in an economy. Ruffin and Gregory (1993) echo the Abel–Bernanke sentiment in their words about activists and nonactivists: Both believe that the self-correcting mechanism works in the long run (p. 375). Another confirmation of this viewpoint comes from Landsburg and Feinstone (1997): The most fundamental source of conflict among macroeconomists is their variety of beliefs about the stickiness of wages and prices. It is relatively uncontroversial to say that prices are flexible in the long run and sticky in the short run (p. 535). The purpose of this paper is to question this long and widely held view. We will show that over 100 years of US history from 1890 to 1994, there was not a single period, short or long, when real wages fell systematically to eliminate unemployment. In fact, real wages rose, time and again, even after unemployment had soared and endured over several years. The paper does not dispute that prices are fully flexible in asset and goods markets, only that they are not so in the labor market. Nor do we question the upward flexibility of the real wage in the wake of excess demand for workers. Only the idea of downward flexibility in the presence of persistent excess supply of labor is challenged by this paper. The notion of downward real-wage flexibility underlies much of modern macroeconomics. In fact, it is at the base of almost all the major branches of economics today, including, macro, international, growth, public finance, among others. Even the Keynesians adhere to this view in their long-run studies. However, if real wages are in fact rigid regardless of the time dimension, how do labor markets clear in the wake of excess supply? There is no doubt that once the time dimension extends to decades instead of years, the US economy has traveled along the path of full employment. Recessions and depressions, even when durable, do vanish eventually. How then has the US economy always returned to the course of full employment in spite of the long-run rigidity of real wages? In other words, what is the true self-correcting mechanism that ultimately restores full employment? This is the second question explored by this paper. We analyze the simple classical model of the labor market because that is where the entire wage-price debate originated. We also show that under realistic conditions, full employment equilibrium occurs in this framework even if real wages are inflexible in the long run.1 Specifically, we demonstrate that it is the ratio of real wage/labor productivity, not the real wage itself, that has fallen time and again to eliminate or mitigate unemployment in the US economy. In general, when the labor market is tight, real wages grow faster than labor productivity. In contrast, in the presence of unemployment, real wages trail labor productivity. However, they seldom fall. This finding suggests that under certain circumstances, supply-side policy prescriptions may be more effective than Keynesian remedies to combat cyclical unemployment.

This paper studied a century of economic data to see how real wages behave during episodes of high unemployment. Contrary to popular belief, we found that not a single depression or protracted recession witnessed a general decline in the average real wage. In fact, real earnings jumped time and again long before unemployment vanished completely and approached the natural rate. Yet, full employment returned in every case. The self-correcting mechanism that eliminates cyclical unemployment then is not the long-run downward flexibility of real wages as postulated by most economists but the long-run downward flexibility of the wage/productivity ratio. Specifically, the real wage fell relative to labor productivity in every episode of unemployment in the US. Thus, supply-side policies may be more effective than demand-side prescriptions to combat unemployment, especially where the falling price level sharply raises the real wage. Of course, real wages are always flexible upward during times of excess demand for labor. This suggests that different processes are at work during periods of labor-market disequilibrium, that is, real wages rise in the case of excess demand for labor but fail to decline in the case of excess supply to restore equilibrium. What repercussions all this has for conventional theories of aggregate supply is something that needs to be further explored.