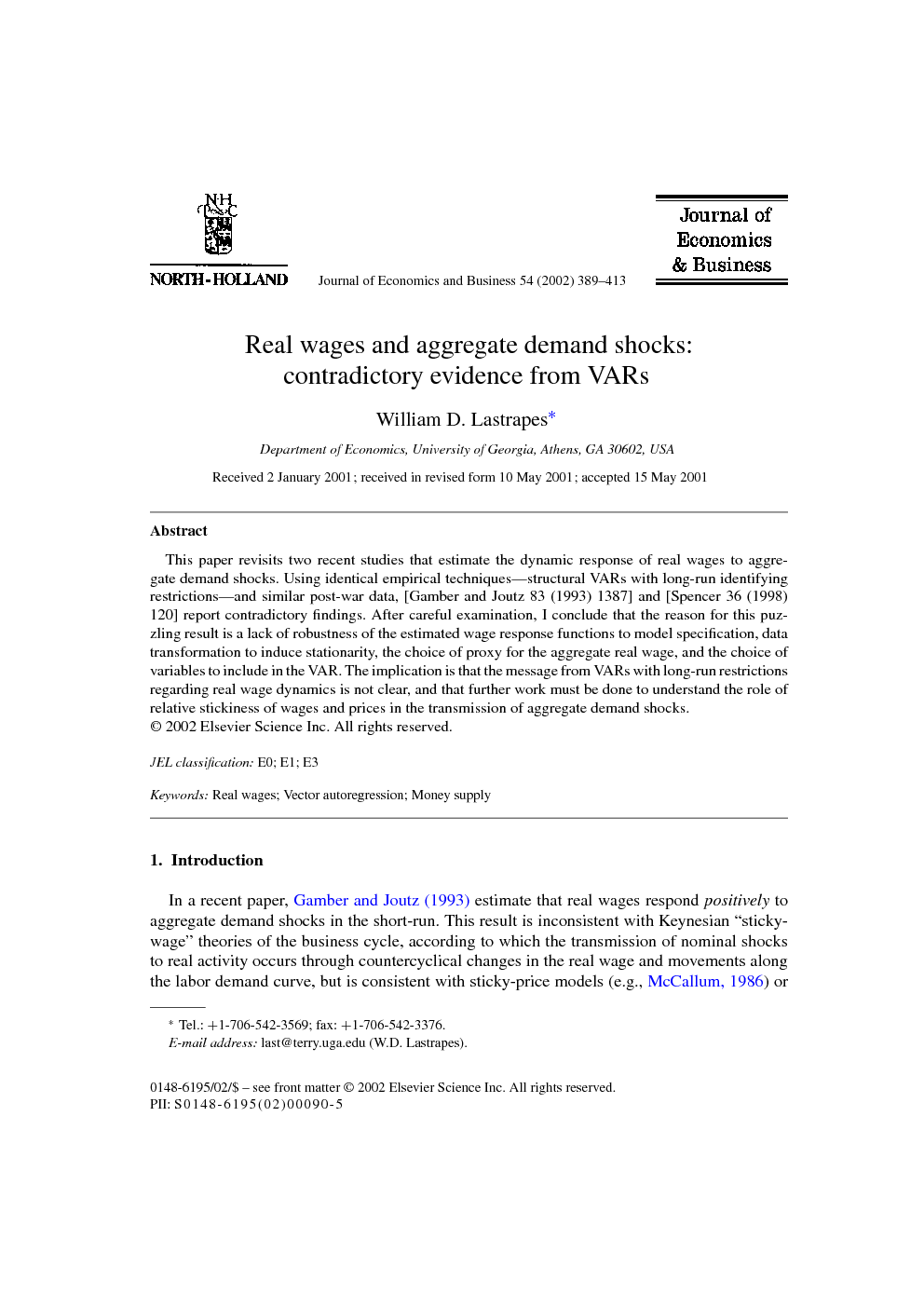 This paper revisits two recent studies that estimate the dynamic response of real wages to aggregate demand shocks. Using identical empirical techniques—structural VARs with long-run identifying restrictions—and similar post-war data, [Gamber and Joutz 83 (1993) 1387] and [Spencer 36 (1998) 120] report contradictory findings. After careful examination, I conclude that the reason for this puzzling result is a lack of robustness of the estimated wage response functions to model specification, data transformation to induce stationarity, the choice of proxy for the aggregate real wage, and the choice of variables to include in the VAR. The implication is that the message from VARs with long-run restrictions regarding real wage dynamics is not clear, and that further work must be done to understand the role of relative stickiness of wages and prices in the transmission of aggregate demand shocks.

In a recent paper, Gamber and Joutz (1993) estimate that real wages respond positively to aggregate demand shocks in the short-run. This result is inconsistent with Keynesian “sticky-wage” theories of the business cycle, according to which the transmission of nominal shocks to real activity occurs through countercyclical changes in the real wage and movements along the labor demand curve, but is consistent with sticky-price models (e.g., McCallum, 1986) or real-business-cycle “limited participation” models of money (e.g., Christiano, Eichenbaum, & Evans, 1997). However, in a more recent study, Spencer (1998) directly contradicts these findings—his estimates suggest that the real wage response to such shocks is strongly and robustly negative, thus supporting the sticky-wage view. Surprisingly, the empirical methods used by these studies are almost identical: each is a time-series study that estimates a three-variable vector autoregression (VAR) including a measure of the real wage, a measure of aggregate real economic activity, and the unemployment rate; each uses aggregate, quarterly, post-war US data; and each identifies the dynamic response of the aggregate real wage to aggregate demand shocks by imposing the plausible restriction that such shocks are neutral (have no effect on real variables) in the long-run. Readers are thus left to wonder both why the findings for real wages differ so dramatically across the studies, and which set of findings best characterizes the actual response of the real wage to aggregate demand shocks.1 The aim of this analysis is to determine the extent to which model specification and choice of empirical proxy for the aggregate variables used in the VAR can explain the variation in such key results across these studies, holding the identification strategy and sample period constant. Clearly, this is an important task (a) theoretically, in light of the significance of real wage dynamics in distinguishing between alternative theories of the transmission mechanism, and (b) econometrically, in light of the critique of long-run restrictions by Faust and Leeper (1997). They point out that the use of long-run identifying restrictions in finite samples inherently lacks robustness; in particular, identified impulse response functions can be very sensitive to specification of the statistical model used. At issue, then, is what we can learn about the dynamic behavior of aggregate real wages from VARs that are identified by infinite-horizon restrictions. My strategy is to vary model specification and empirical proxy along crucial dimensions and to compare the resulting dynamic response functions of real wages, real activity, and unemployment or nominal output, over a common sample period. I find a remarkable degree of robustness for real activity and unemployment/nominal output. However, I am also able to replicate the different results of Gamber and Joutz (1993) and Spencer (1998) for wages, and show that the dynamic response of the real wage is much less robust than as suggested by each of these studies. In particular, the estimated real wage responses are sensitive to lag length in the VAR, data transformation to induce stationarity, and choice of empirical proxies both for the real wage and for the nominal variables used to drive the identification of aggregate demand shocks. The upshot is that (a) aggregate demand shocks and dynamic responses can be confidently identified with long-run restrictions, given the robust findings for some variables in the system (so that the Faust and Leeper critique is not necessarily always a practical concern); but that (b) we learn little about the transmission mechanism of aggregate demand shocks through labor markets, in particular how real wages respond to such shocks, from long-run restrictions in trivariate VARs. This exercise cannot definitively answer the second question above (How do wages really respond to demand shocks?), but it suggests how to go about getting an answer.

In this paper, I have shown that the use of long-run restrictions in the context of trivariate VARs, a strategy taken by Gamber and Joutz (1993) and Spencer (1998), does not provide definitive answers regarding the response of aggregate real wages to aggregate demand shocks, despite their claims to the contrary. The contradictory findings of these studies can be explained by differences in: (a) data transformation used to achieve stationarity, especially with regards to unemployment; (b) the choice of empirical proxy for the economic variables, especially the real wage and the variable used to identify aggregate demand shocks (unemployment or nominal GDP); and (c) the lag length used to specify the VAR. Depending on the reader’s priors regarding these modeling choices, he or she can find support in the data for a positive response, a negative response, or no response of real wages to aggregate demand shocks. Without further guidance about the proper statistical specification or the appropriate economic proxies, the message about real wage dynamics from VARs with long-run restrictions is unclear.21 Note that my results do not imply that structural VARs with long-run restrictions are inherently unreliable due to the technical problems laid out by Faust and Leeper (1997). Although the sensitivity of the real wage response to alternative statistical specifications seems to be a manifestation of these problems, the responses of output, employment and unemployment are highly robust and plausible. My findings do, though, emphasize the importance of the well-known lesson that careful checks on the robustness of estimated coefficients are essential. This seems especially true when long-run restrictions are exploited, and when the data possibly need to be detrended to achieve stationarity. Also, as forcefully pointed out by Canova (1998), how such detrending is achieved can matter. The lack of robustness found here can potentially be due to the inability of the simple trivariate VAR to account for the actual (complex) economic behavior of the labor market. For example, Ramey and Shapiro (1998) show that compositional (sector-specific) effects can lead to quite different wage responses to government spending shocks (a specific type of aggregate demand), depending on how real wages are measured and deflated. This is consistent with the theoretical model developed in their paper, but such subtleties are ruled out in the models considered here. In other words, empirical work on the effects of demand shocks on real wages should be better guided by theory in determining how real wages are to be measured. It also suggests the potential gain from more precisely identifying different sources of aggregate demand shocks (such as shocks to money supply). Finally, the work of Cooley and Dwyer (1998) suggests that better attention to economic theory in determining the statistical specification (given the choice of proxies) can yield more robust estimates of real wage dynamics. Further analysis along these lines will contribute to our understanding of the transmission of aggregate demand shocks.