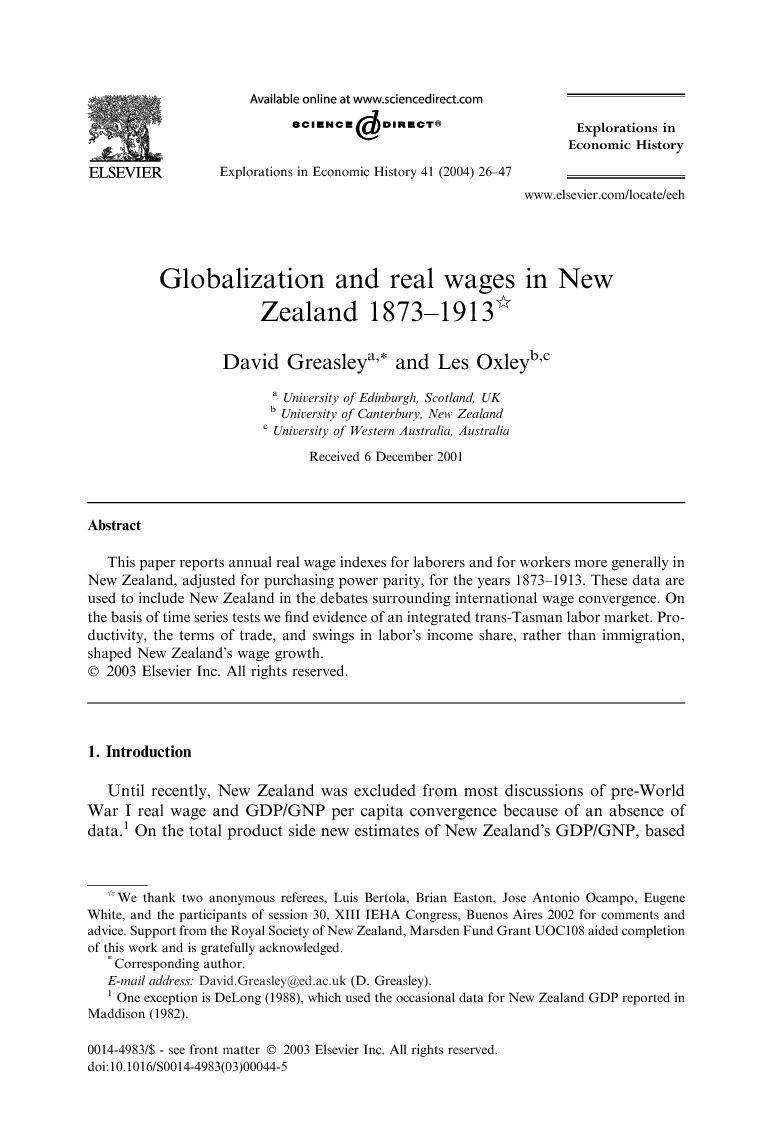 This paper reports annual real wage indexes for laborers and for workers more generally in New Zealand, adjusted for purchasing power parity, for the years 1873–1913. These data are used to include New Zealand in the debates surrounding international wage convergence. On the basis of time series tests we find evidence of an integrated trans-Tasman labor market. Productivity, the terms of trade, and swings in labor’s income share, rather than immigration, shaped New Zealand’s wage growth.

Until recently, New Zealand was excluded from most discussions of pre-World War I real wage and GDP/GNP per capita convergence because of an absence of data.1 On the total product side new estimates of New Zealand’s GDP/GNP, based upon monetary data, by Rankin (1992) and by Greasley and Oxley (2000a) have been deployed by Bertola and Porcile (2000) and Greasley and Oxley, 1999 and Greasley and Oxley, 2000b to investigate New Zealand’s comparative experience. Less progress has been made in relation to real wages. New Zealand wage estimates are not included in Williamson’s (1995) data set for unskilled urban workers, and thus his discussion of international wage convergence does not consider New Zealand. Nor does Allen’s (1994) investigation of real wages in various cities in the English-speaking world for the years prior to 1914 include New Zealand. This article reports new wage data for New Zealand, permitting New Zealand’s inclusion in the globalization debates. Annual data for New Zealand general (non-farm common) laborers’ real wages for the years 1873–1913 have been constructed so as to be compatible with Williamson’s series for urban unskilled workers. While focusing on one specific group of workers has some advantages for international comparisons, a composite real wage index, akin to Pope and Withers’ (1994) index for Australia, is also reported. Together, these data are used to consider how the forces of international trade, migration, and productivity influenced wages in New Zealand and to investigate the existence wage convergence with her near neighbor across the Tasman Sea, Australia. Different interpretations of Australia’s wage experience prior to 1914 have been proposed. Pope and Withers (1994), and Greasley et al. (2000) findings show that real wages increased slightly with immigration, in Australia. Addison and Worswick (2002) also deny that migrants had adverse effects on the real wages of native Australians. Hatton and Williamson (1998) take a different view and argue that the late nineteenth century mass migrations decreased real wages generally in the New World, including in Australia. Adding New Zealand to these debates will show the extent to which Australasian wage experience was atypical among the migrant-receiving economies. New Zealand’s exclusion from the historiography of international wage convergence is surprising, given the mass of wage data collected by the Dominion’s governments prior to 1914. Arnold (1982a) surveys the available sources and makes particular use of the data published every year in Statistics of New Zealand beginning in 1873. A variety of consumer price data are also available, and these have been reviewed by Nesbit-Savage (1993). Inclusion of New Zealand in international real wage comparisons also requires the calculation of a purchasing power parity adjusted real wage benchmark for the Dominion. Allen (1994) compared real wages adjusted for purchasing power in Australia, Canada, and the USA with those in Great Britain in 1896, and his findings were adopted in Williamson’s wider study. Here, we add to the literature by comparing wages adjusted for purchasing power in New Zealand and Great Britain in 1896, which facilitates the inclusion of New Zealand in Williamson’s wider compilations, and thus in the debates surrounding globalization. The new data are used initially to consider possible wage convergence between Australia and New Zealand on the basis of time series tests. Our findings reject the existence of trans-Tasman Sea wage convergence for general (non-farm common) laborers, but not the existence of a common stochastic trend, which implies that common shocks influenced laborers’ wages in both countries. For all workers generally, the composite index of New Zealand wages is compared with Pope and Withers’s index for Australia, and trans-Tasman wage convergence is not rejected. Investigating the influences of migration, the terms of trade, and productivity on laborers’ real wages in New Zealand within both modern time series and accounting identity frameworks (Greasley et al., 2000), we find that in contrast to the experience of Australia immigration reduced real wages in New Zealand, but that the effects of productivity and the terms of trade were positive.

Recent analyses of New Zealand’s economic development measured by GDP per capita have highlighted the idiosyncrasies of the Dominion’s growth experience and argued that she grew apart from Australia. Investigation of real wages adjusted for purchasing power parity tempers this perspective. On the basis of a newly constructed composite wage index for New Zealand workers, and time series tests, we find evidence of wage convergence with Australia. Convergence was not found in the case of laborers, but common forces are shown to have shaped laborers’ real wages on both sides of the Tasman Sea. Laborers real wage growth was faster in New Zealand, and the large trans-Tasman wage gaps for laborers’ of the 1870s had largely disappeared by the First World War. Over the period 1873–1913 New Zealand real wage growth, for laborers and workers generally, exceeded the rise in New Zealand’s GDP per capita. Immigration tended to depress real wages in New Zealand. This result contrasts qualitatively with Australian experience, where migration increased real wages, but in both cases the quantitative impact of migration on real wages was meager. Improvements in the terms of trade were more important, and increased real wages in New Zealand, especially during the years of higher real wage growth to 1890. The accounting results show a marked slowdown in New Zealand real wage growth after 1890. Somewhat paradoxically, real wage growth was less fast in the years of higher New Zealand’s GDP per capita/labor growth. The real wage retardation is partly explained by the near stagnation New Zealand’s terms of trade between 1890 and 1913, but other forces were also at work. Labor’s share of income rose sharply to 1890, but fell afterwards. One possible explanation is that technological progress, specifically refrigeration, had powerful effects on the wage-land rental value ratio. Refrigeration made possible the almost complete re-orientation of New Zealand agriculture to the British market after 1890. Gauging how the augmented export market opportunities impinged on relative factor prices in the Dominion, and thus whether or not technological progress favored property over wage income in New Zealand during the quarter century to 1914, remain important desiderata.