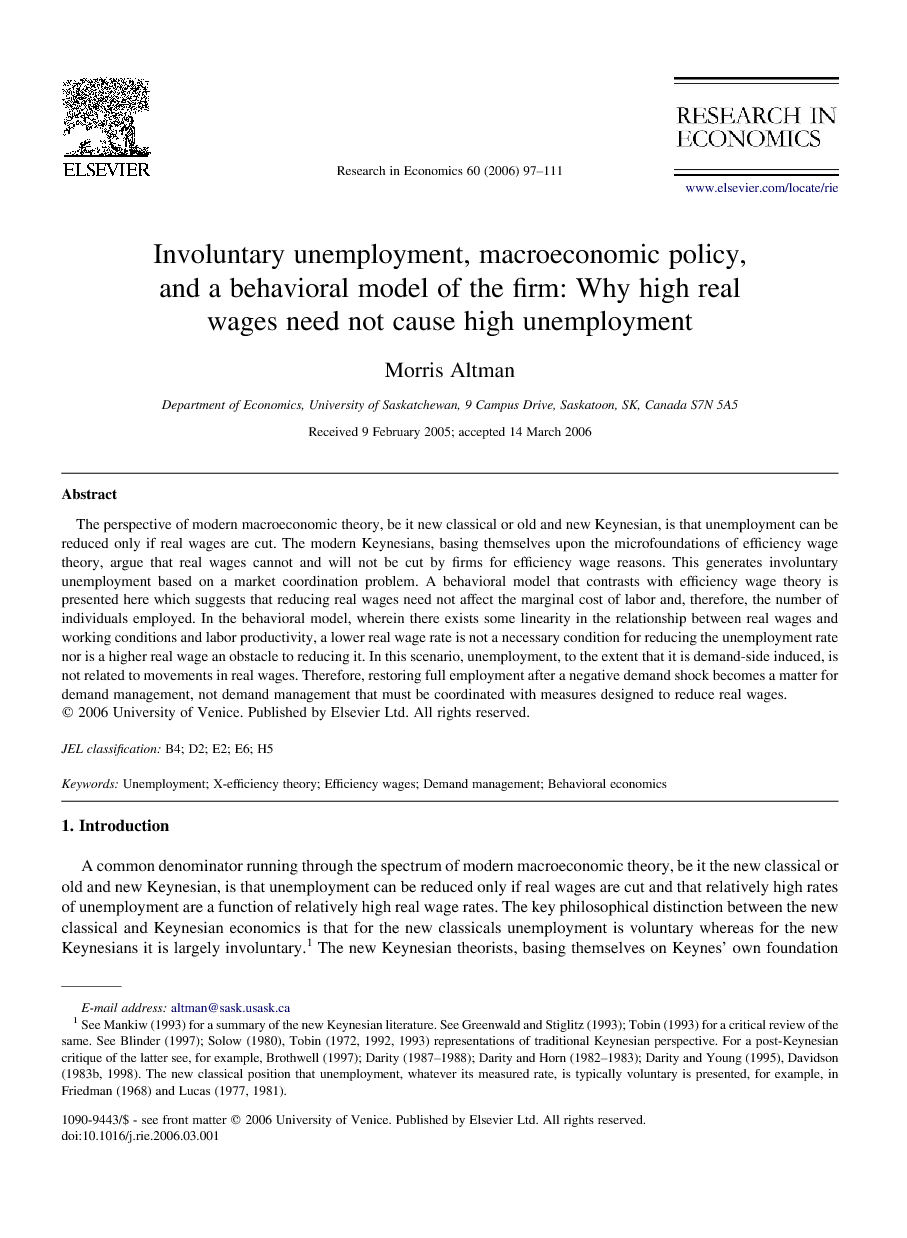 The perspective of modern macroeconomic theory, be it new classical or old and new Keynesian, is that unemployment can be reduced only if real wages are cut. The modern Keynesians, basing themselves upon the microfoundations of efficiency wage theory, argue that real wages cannot and will not be cut by firms for efficiency wage reasons. This generates involuntary unemployment based on a market coordination problem. A behavioral model that contrasts with efficiency wage theory is presented here which suggests that reducing real wages need not affect the marginal cost of labor and, therefore, the number of individuals employed. In the behavioral model, wherein there exists some linearity in the relationship between real wages and working conditions and labor productivity, a lower real wage rate is not a necessary condition for reducing the unemployment rate nor is a higher real wage an obstacle to reducing it. In this scenario, unemployment, to the extent that it is demand-side induced, is not related to movements in real wages. Therefore, restoring full employment after a negative demand shock becomes a matter for demand management, not demand management that must be coordinated with measures designed to reduce real wages.

A common denominator running through the spectrum of modern macroeconomic theory, be it the new classical or old and new Keynesian, is that unemployment can be reduced only if real wages are cut and that relatively high rates of unemployment are a function of relatively high real wage rates. The key philosophical distinction between the new classical and Keynesian economics is that for the new classicals unemployment is voluntary whereas for the new Keynesians it is largely involuntary.1 The new Keynesian theorists, basing themselves on Keynes' own foundation contribution to the literature, argue that real wages must be cut in the short run (plant size and technology are held constant) for unemployment to fall. A reduction in real wages is a necessary condition for increasing the level of employment and, thereby, the rate of unemployment. This can be done most efficaciously through a mild inflationary process and such cuts would be acceptable to workers at large in a world where prices are sticky downwards (Akerlof, 2002, Akerlof et al., 1996, Akerlof et al., 2000 and Fortin, 2001). Thus, for the new Keynesians, a key explanatory variable to persistent high rates of unemployment and to increasing unemployment rates, is the downward stickiness of real wages. The post Keynesians, on the other hand, focus on increasing aggregate demand, implicitly assuming that real wages will fall, as need be, in the process of demand-side expansion—the dynamics of necessary real wage adjustments are largely ignored in this discourse. The new classical economists reject the assumption that workers would accept any such real wage cuts, thereby maintaining, voluntarily, the prevailing macroeconomic rate of unemployment. A behavioral model presented in this article suggests that changing real wages need not affect the marginal cost of output over a range of wage rates through its effect upon effort inputs and, in the longer term, upon technical change. The behavioral model, therefore, suggests that the production function is not determined independent of real wages or working conditions in the firm, as it is in its traditional rendering. In this scenario, reducing real wages is not a necessary condition for increasing employment. Nor need increasing real wages be a supply side obstacle to increasing employment. In this scenario, unemployment, to the extent that it is demand-side driven, need not be related to movements in real wages. Therefore, restoring full employment after a negative demand shock becomes a matter for demand management, not demand management that must be coordinated with measures designed to reduce real wages. Moreover, in this scenario, maintaining an adequate level of aggregate demand becomes a necessary condition for maintaining low levels of unemployment. Demand management is also modeled as a corollary to increasing the efficiency of labor. In other words, a dynamic dialectical relationship is established between increasing and high real wages, increasing and high levels of economic efficiency, demand management and the rate of unemployment. From this perspective, on the supply side, more attention need be placed on increasing the level of economic efficiency as opposed to reducing real wages. On the other hand, increasing efficiency, without corresponding increases in aggregate demand will generate increasing rates of unemployment.2 Which economic theory is used to design macroeconomic policy is critically important. Measured unemployment remains high and is, indeed, now much higher than it was on average in the first decades following the Second World War. Table 1 presents unemployment rate estimates for 20 advanced market economies for the 1950–2003 time-frame. Average unemployment has increased from 3% in the 1950–1973 period (pre-oil shock), to 5.5% in the 1974–1983 period, to 8% in the 1984–1993 time-frame. At least for the first few years of the new millennium the unemployment rate was 6.2%. From the mid-1970s, governments in these economies by and large pursued relatively tight macroeconomic policy being largely concerned in the post-1973 period with inflationary pressures as opposed to unemployment, with the underlying belief that real wage inflexibility played and continues to play a pre-eminent role in maintaining the relatively high rates of unemployment (Eatwell, 1997, Lombard, 2000, Maddison, 1984, Michie and Wilkinson, 1994 and Tarling and Wilkinson, 1997). The gist of this paper is to improves the standard modeling of the causes of involuntary unemployment by introducing alternative assumptions contained in a behavior model presented here, that wages and working conditions impact upon the production function. The framework for this discussion is the macroeconomic demand model contained in the standard IS-LM framework and in the post-Keynesian rendition of Keynes' work and the macroeconomic supply model contained in the neoclassical production function parlayed into the labor market. Particular attention is paid to the importance of supply side factors in these models, specifically real wages, as a constraint to demand side efforts to reduce the rate of unemployment.

Keynes argued that in monetized market economies unemployment rates can reach high levels and get stuck at these high levels without active government macroeconomic intervention. However, he believed that although the key to achieving low rates of unemployment is demand management he argued, basing himself on the conventional wisdom on the microfoundations of economic theory, that increasing demand must be and would be accompanied by a reduction in the real wage rate even if one assumes ‘rational’ economic agents. This perspective is echoed in the contemporary macroeconomic literature where persistent high rates of unemployment are typically attributed to the downward rigidity of real wages. The behavioral model presented here suggests that higher real wage rates or the downward stickiness of real wages may have little to do with either generating or maintaining relatively high rates of unemployment if such wage rates positively affect labor productivity. Moreover, lower real wage rates might have the effect of reducing the maximum level of achievable employment by reducing labor productivity. Therefore, the existence of relatively high real wage rates and the downward inflexibility of real wage rates need not signify labor market obstacles to the realization of sustainable lower unemployment rates. In this scenario, the culprit responsible for high rates of unemployment might very well be restrictive and inadequately expansive macroeconomic policy. Efforts to make labor markets more flexible by weakening the bargaining power of labor so as to reduce the unemployment rate might be both unnecessary and counterproductive. The behavioral model therefore suggests that more research effort be expended to better understand the relationship between wage rates and working conditions, and labor productivity, and how this relationship relates to demand-side policy. Simply assuming that labor productivity is determined independent of the wage rate and working conditions and that given diminishing returns real wages must be made flexible downward can very well generate economic policy that needlessly reduces the absolute or relative level of material wellbeing of workers while doing little to bring employment to the currently involuntarily unemployed.