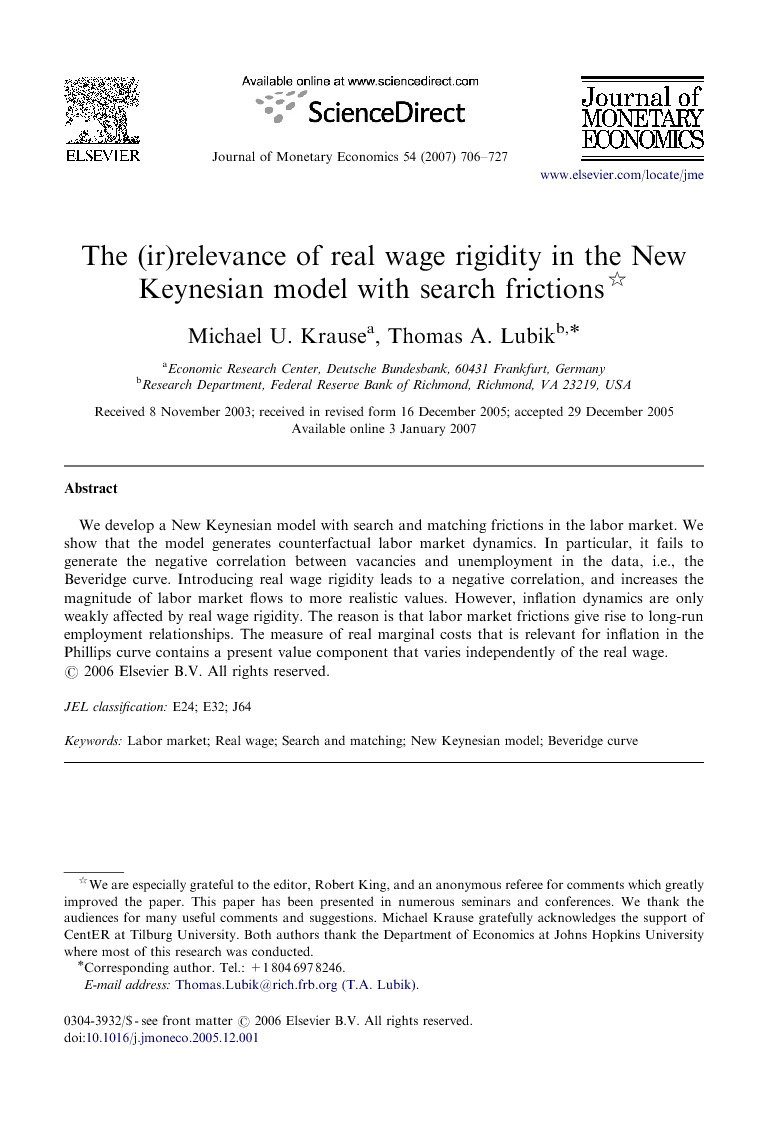 We develop a New Keynesian model with search and matching frictions in the labor market. We show that the model generates counterfactual labor market dynamics. In particular, it fails to generate the negative correlation between vacancies and unemployment in the data, i.e., the Beveridge curve. Introducing real wage rigidity leads to a negative correlation, and increases the magnitude of labor market flows to more realistic values. However, inflation dynamics are only weakly affected by real wage rigidity. The reason is that labor market frictions give rise to long-run employment relationships. The measure of real marginal costs that is relevant for inflation in the Phillips curve contains a present value component that varies independently of the real wage.

It is widely recognized that the New Keynesian business cycle model cannot explain the dynamics of inflation and persistent effects of monetary shocks unless a sufficient degree of real marginal cost rigidity is present.1 A potential source are rigid real wages. When firms set prices as a markup over marginal costs, the cyclicality of the real wage affects the dynamics of inflation. However, the standard New Keynesian model features a neoclassical labor market, which implies that the real wage is in fact strongly procyclical unless an implausibly high degree of individual labor supply elasticity is imposed. This suggests an important role of labor market imperfections in explaining the behavior of inflation. Of these, search and matching frictions along the lines of Mortensen and Pissarides (1994) figure prominently in current research.2 This type of friction makes the search of workers and firms for a suitable match time consuming, which can serve as an internal propagation mechanism for business cycle shocks. In this paper, we develop a New Keynesian model with sticky prices and employment adjustment in a frictional labor market with endogenous job destruction. We find that search and matching frictions per se do not improve the ability of the model to explain persistent effects of monetary shocks. Neither does the addition of a monetary side help explain labor market dynamics, such as the high volatility and the negative correlation of vacancies and unemployment. Fig. 1 shows the behavior of these variables in the U.S. over the period from 1951 to 2003.3 The inverse relationship between vacancies and unemployment is referred to as the Beveridge curve. Moreover, both variables are several times more volatile than GDP (see Table 2). So is labor market tightness, as measured by the vacancy-unemployment ratio. It is these patterns that the baseline model fails to replicate. Introducing real wage rigidity improves the behavior of the labor market, as the volatility of vacancies and unemployment is amplified and the Beveridge curve can be replicated. This confirms for the sticky price model the point made by Hall (2005) and Shimer (2005) in the context of real labor market models. However, we also show that real wage rigidity does not reduce the cyclicality of real marginal costs, and therefore cannot generally help explain persistent effects of monetary shocks. Real wage rigidity barely affects the dynamics of inflation, neither qualitatively nor quantitatively. The explanation for this seemingly counterintuitive finding lies in the effect of real wage rigidity on the volatility of the costs of hiring and creating jobs. In the standard search and matching model, wages are perfectly flexible as they are set according to the Nash bargaining solution. Worker and firm share the surplus from their match; wages thus depend monotonically on the ratio of vacancies to unemployment. An increase in labor market tightness reduces the incentives for firms to post new vacancies because one component of costs, wages, rises. This keeps the overall response of vacancies and unemployment muted. A rigid real wage, on the other hand, strongly increases the incentive to create jobs in a boom, since firms share less of the benefit with their workers. However, as vacancies rise and unemployment falls, there is a substantial increase in the cost of hiring workers which are a component of firms’ real marginal costs. Thus, while one component becomes more rigid, the other becomes more volatile. For this reason, inflation dynamics are barely affected as the overall degree of real rigidity in the economy remains essentially unchanged. Our model is largely standard in its description of product and labor markets with search frictions. A detail of interest is that we embed the price setting and employment adjustment decisions within a single, representative firm. This differs from the literature, which typically separates the economy into two sectors: a monopolistically competitive sector that produces differentiated goods; and an intermediate input sector that hires workers from the frictional labor market. Our unified approach makes the interaction between price setting and employment adjustment explicit. It also clarifies the nature of real marginal costs. They differ from the real wage because labor market frictions generate long-run attachments between workers and firms. The relevant marginal cost concept therefore includes the marginal contribution of a newly hired worker to the entire present value of the firm which need not move with the current real wage. Most importantly, even if real wages were entirely rigid, real marginal costs could vary substantially.4 Therefore, using measures of labor costs such as the labor share can be a misleading shortcut in the estimation of the New Keynesian Phillips curve. Two other recent papers incorporate search and matching frictions and endogenous job destruction into New Keynesian models. Walsh (2005) builds on den Haan et al. (2000) in his formulation of the labor market and focuses on how labor market frictions affect the response of the economy to monetary shocks. However, his macroeconomic structure features a cost channel of monetary policy transmission and habit formation which we abstract from to highlight the effects of real wage rigidity. Trigari (2004) follows Cooley and Quadrini (1999) in her description of the labor market, but focuses on the implications of labor market search for inflation and the ability to explain employment fluctuations at the intensive and extensive margins. Her model also differs from the baseline New Keynesian framework in that it assumes habit formation in consumption. Even though this improves the quantitative performance of the model, the precise role of frictions and real wage rigidity becomes difficult to assess. The paper proceeds as follows. Section 2 develops the model, emphasizing the interaction between price setting and the frictional labor market. In Section 3, we describe the calibration of the model, while Section 4 reports and discusses the main findings of the baseline specification. In Section 5, we explore the role of real wage rigidity, while we show the robustness of the results to alternative calibrations in Section 6. Section 7 concludes.

In a baseline New Keynesian model, labor market frictions render real wage rigidity potentially irrelevant for the dynamics of inflation. The reason is the importance of wage rigidity for the dynamics of the labor market. A rigid real wage generates a Beveridge curve and cyclicality of vacancies and unemployment that is consistent with the data. But the resulting volatility of labor market tightness affects real marginal costs and thus inflation dynamics through the New Keynesian Phillips curve. As one component of real marginal costs, wages, becomes less volatile, the other component, hiring and job creation costs, becomes more volatile. The mechanism emphasized by Hall (2005) and Shimer (2005) that helps the search and matching model fit the facts, appears to have a neutralizing effect in sticky price models. One of the insights of this paper is that in the presence of labor market frictions the relevant measure of marginal cost is explicitly dynamic. It represents the marginal contribution of an additional unit of labor to the present discounted value of profits which is distinctly different from current real wages. This suggests that empirical studies of the Phillips curve that use simple marginal cost measures or the labor share are misspecified. An alternative approach would either use system-based methods along the lines of Lubik and Schorfheide (2004), or use direct measures of workers’ and firms’ match asset values as suggested by Merz and Yashiv (2004). A second research direction should attempt to derive wage rigidity endogenously. A step in this direction is Krause and Lubik (2004) who introduce on-the-job search in an otherwise standard business cycle model with search and matching features. They show that this results in much less volatile wages compared to the standard model since the relevant measure of labor market tightness includes employed searchers as well as the unemployed. Other things being equal, on-the-job search increases competition for open vacancies to the effect that wages are kept lower and less volatile as the outside option of each worker declines. While wage rigidity does help generate a Beveridge curve, a shortcoming remains. Job creation and destruction in our model are positively correlated. This is due to the excess sensitivity of job destruction to desired changes in employment. There are two factors at work. One is that job destruction is costless, while job creation is not. The other is that vacancy creation only leads to an inflow of new workers one period hence, while job destruction is instantaneous. This suggests introducing a mechanism that makes job destruction a costly margin relative to job creation, either directly in terms of firing costs, or indirectly via some form of heterogeneity. As an example for the latter, new and old jobs could be different, in which case it is beneficial to increase employment by hiring new workers on new jobs, rather than preserving more of the unproductive, old jobs. Introducing heterogeneity potentially generates more sluggish employment adjustment and hence contributes to the persistence of output and inflation. We leave this to future research.