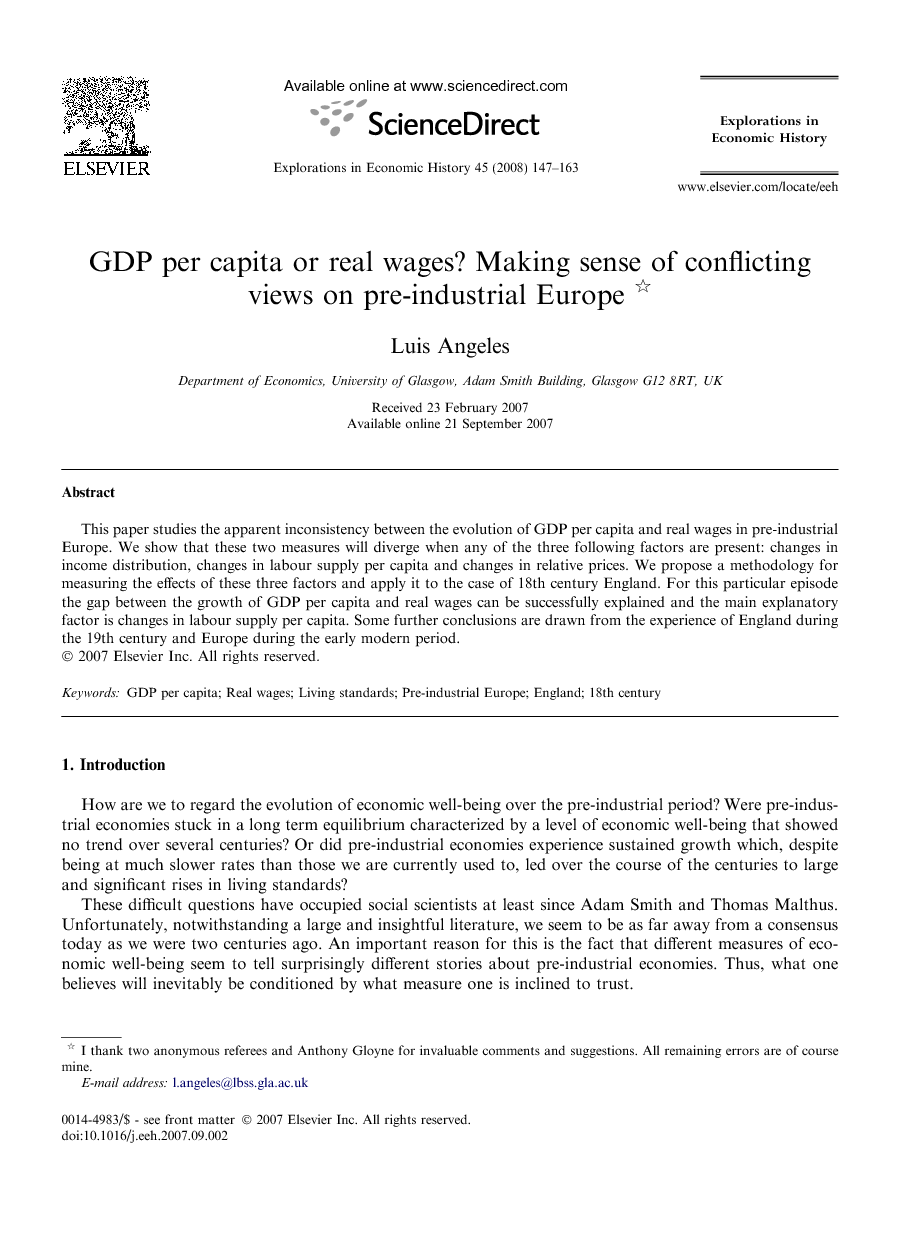 This paper studies the apparent inconsistency between the evolution of GDP per capita and real wages in pre-industrial Europe. We show that these two measures will diverge when any of the three following factors are present: changes in income distribution, changes in labour supply per capita and changes in relative prices. We propose a methodology for measuring the effects of these three factors and apply it to the case of 18th century England. For this particular episode the gap between the growth of GDP per capita and real wages can be successfully explained and the main explanatory factor is changes in labour supply per capita. Some further conclusions are drawn from the experience of England during the 19th century and Europe during the early modern period.

The evolution of living standards and economic well-being over the pre-industrial period is a huge research area where our questions easily outnumber our answers. This paper addresses one of such questions: why are estimates of GDP per capita and real wages over the pre-industrial period seemingly contradicting each other? We hope to have contributed to the literature on two different levels. On a theoretical level, we have offered an accounting framework that decomposes the difference between GDP per capita and real wages into three components: changes in income distribution, labour supply per capita and relative prices. We believe that this framework can help shed light on this question and illustrate how GDP per capita and real wages will perform differently if the economy experiences these types of changes. The attention of the researcher can then be focused on looking for evidence of these changes. On an empirical level we have applied our framework to England during the 18th and 19th centuries. We show that the contrasting experiences of these two centuries can be understood as the consequence of changes in income distribution and labour supply per capita. The next step on the empirical side would be to try to reconcile the evolution of GDP per capita and real wages in the rest of Europe. This is a major challenge, as the figures in Table 6 reveal. Here we compare GDP per capita growth estimates from Van Zanden (2001) with real wage growth estimates from Allen (2001) for six European countries for the period 1500–1820 (real wage estimates refer to a major city within each country). The general picture is clear: real wages grew much slower (or decreased much faster) than GDP per capita in all countries. This pan-European real wage underperformance during the early modern period is puzzling and an explanation for it should be high on the researchers’ agendas. Is it possible that a common force was sweeping throughout Europe during this period and causing the systematic pattern we see in Table 6? An interesting possibility would be the existence of an “industrious revolution” taking place not just in England but in several parts of the continent, though to different degrees. This factor was the dominant one in our analysis of 18th century England, and we might speculate that the English experience had some points in common with other European countries. If the working year was progressively lengthening all over Europe between 1500 and 1820, we would expect the phenomenon to be most pronounced in North-Western Europe for at least two reasons. First, the lengthening of the working year was achieved mostly by increasing the number of days worked through the progressive elimination of religious holidays and “St. Monday”. This was more likely to take place in protestant countries, as exposed by Max Weber’s famous thesis on the protestant ethic (Weber, 1930). Second, the period between the Renaissance and the Industrial Revolution saw a shift in the balance of economic power towards North-Western Europe and markets became a more pervasive feature of the economic landscape there. Our reading of Jan de Vries’ work is that one of the main driving forces behind the “industrious revolution” in England was the increased presence of the market as a buyer of labour and a seller of consumption goods. The argument would then be that the more developed markets of North-Western Europe would have had a larger effect on workers there; “pushing” them to supply more labour and consume more goods. If, as we suggest, the increase in labour supply per capita was more marked in North-Western Europe our framework would predict ceteris paribus a larger wedge between the growth rates of GDP per capita and real wages in those countries. It is certainly too soon to make strong claims in this area, but one cannot but help remarking that this is precisely the case in the data presented in Table 6. The difference between growth rates is greatest in North-Western European countries (108% in the UK, 74% in the Netherlands and 52% in Belgium) and falls as we move towards the European “periphery” (38% in Italy, 39% in Spain, 15% in Poland). It is as if the “work ethic” of protestant countries was cruelly rewarded with a larger deficit of real wages with respect to GDP per capita. The above discussion is to be regarded as highly speculative as there is considerable uncertainty surrounding the estimates of GDP per capita for this period. The first task of future research should be to extend the work in this area: we need to consolidate the estimates for the countries that are present in Table 6 and construct estimates for those that aren’t. France and Germany, in particular, are two important missing countries whose GDP per capita estimates could be readily compared with real wage estimates for French and German cities calculated by Allen (2001). Regarding real wages, estimates for countries other than England are relatively rare and one would like to see Allen’s calculations confirmed by other researchers. Once we feel more secure of the patterns of these two measures over the pre-industrial period we can look for explanations of their eventual divergence. Changes in income distribution and changes in labour supply per capita offer the most research “bang for the buck” since their effects can be applied without the need for detailed sectorial information. If the pattern we identified in Table 6 is confirmed by future research then an explanation based on increased working effort throughout Europe—but specially in North-Western Europe—could gain acceptance and improve our understanding of this challenging episode of economic history.