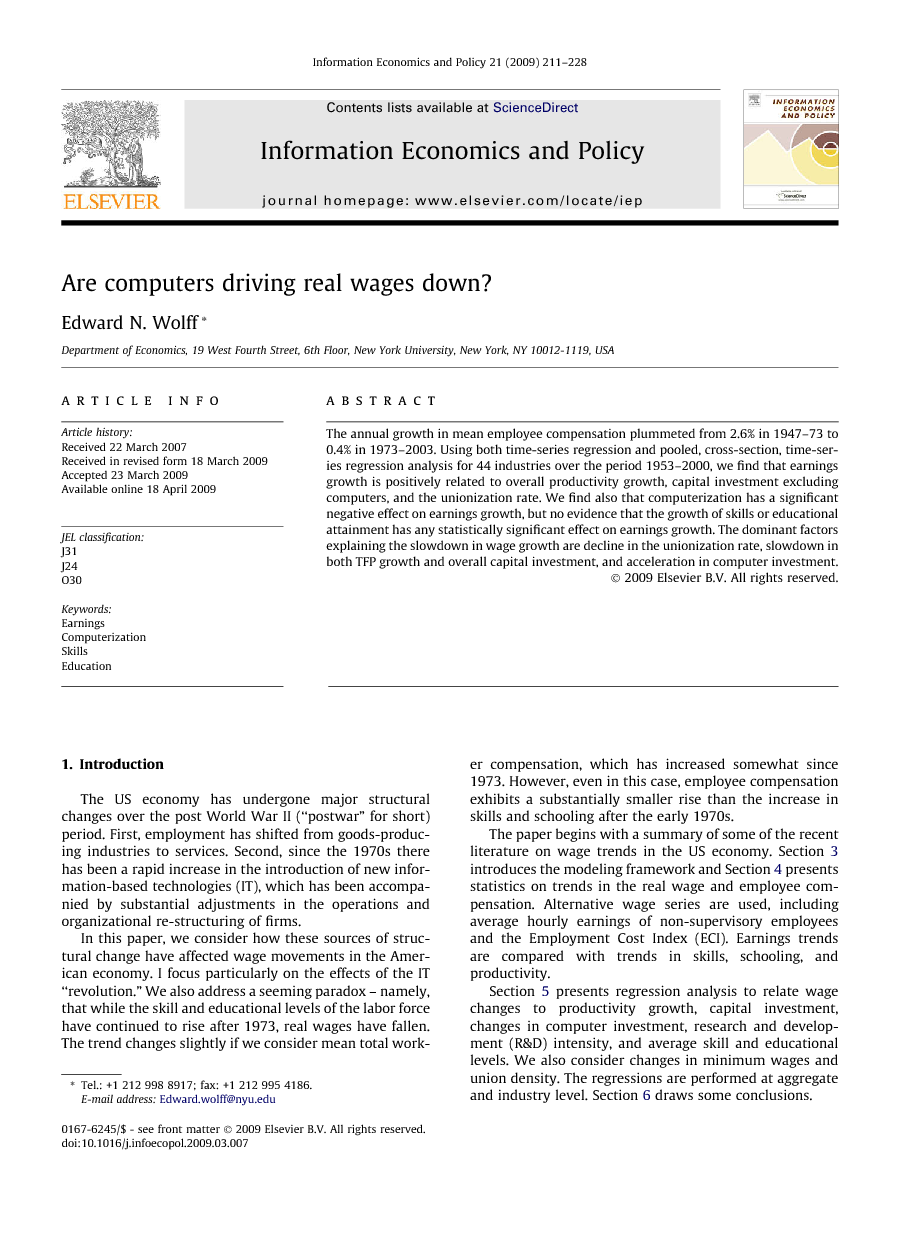 The annual growth in mean employee compensation plummeted from 2.6% in 1947–73 to 0.4% in 1973–2003. Using both time-series regression and pooled, cross-section, time-series regression analysis for 44 industries over the period 1953–2000, we find that earnings growth is positively related to overall productivity growth, capital investment excluding computers, and the unionization rate. We find also that computerization has a significant negative effect on earnings growth, but no evidence that the growth of skills or educational attainment has any statistically significant effect on earnings growth. The dominant factors explaining the slowdown in wage growth are decline in the unionization rate, slowdown in both TFP growth and overall capital investment, and acceleration in computer investment.

The US economy has undergone major structural changes over the post World War II (“postwar” for short) period. First, employment has shifted from goods-producing industries to services. Second, since the 1970s there has been a rapid increase in the introduction of new information-based technologies (IT), which has been accompanied by substantial adjustments in the operations and organizational re-structuring of firms. In this paper, we consider how these sources of structural change have affected wage movements in the American economy. I focus particularly on the effects of the IT “revolution.” We also address a seeming paradox – namely, that while the skill and educational levels of the labor force have continued to rise after 1973, real wages have fallen. The trend changes slightly if we consider mean total worker compensation, which has increased somewhat since 1973. However, even in this case, employee compensation exhibits a substantially smaller rise than the increase in skills and schooling after the early 1970s. The paper begins with a summary of some of the recent literature on wage trends in the US economy. Section 3 introduces the modeling framework and Section 4 presents statistics on trends in the real wage and employee compensation. Alternative wage series are used, including average hourly earnings of non-supervisory employees and the Employment Cost Index (ECI). Earnings trends are compared with trends in skills, schooling, and productivity. Section 5 presents regression analysis to relate wage changes to productivity growth, capital investment, changes in computer investment, research and development (R&D) intensity, and average skill and educational levels. We also consider changes in minimum wages and union density. The regressions are performed at aggregate and industry level. Section 6 draws some conclusions.

Annual growth in employee compensation plummeted from 2.6% in 1947–73 to 0.4% in 1973–2000. The results are similar for measures of wages and salaries. We attempted here to uncover the factors behind these results. Perhaps the most provocative finding from this study is the negative effect of computerization on earnings growth. The result holds in both the time-series and the pooled time-series, cross-sectional analyses. It is not inconsistent with the model developed in Section 3, which, on the basis of some parameter values, shows a negative effect of computerization on overall wage growth. Our results suggest that IT capital-skill complementarity overall is fairly weak. On the basis of the growth accounting decomposition from the time-series regression results, the rapid growth of IT accounts for about 20% of the slowdown in earnings growth before and after 1973. Our empirical findings are not consistent with those in Allen (2001) that industry wage premia are correlated with the use of high-tech capital, or with Dunne and Schmitz’s (1992) findings that workers earn more working in more technology intensive plants, or with those of Dunne et al. (2000) that plant-level wages are positively associated with computer intensity. Our results also contrast with those of Krueger, 1993 and Autor et al., 1998, who found an earnings premium of 15% or more for IT workers relative to workers that do not use computers, on the basis of cross-sectional data on individuals. However, the present results are not necessarily inconsistent with these last two studies since the focus was on skill premia (or relative wage levels), not average wage growth. One justification for this finding lies in Nelson and Phelps’s (1966) argument and Greenwood and Yorokoglu’s (1997) claim that skilled workers enjoy a comparative advantage in implementing and adopting new technologies. As a result, technological change may be followed by a transition period during which a growing proportion of skilled workers is assigned to “new” tasks comprising experimenting, developing and implementing routines to order to utilize these new technologies. This transition period is likely to be characterized by accelerated demand for skilled workers and a rapidly growing skill premium, but a slowdown in labor productivity, which, in turn, may be associated with a slowdown in growth of real earnings. Unionization rate is found to be positively related to earnings growth in both sets of regressions, although the coefficient is significant only in the time-series analysis. However, the drop in the unionization rate after 1973 accounts for about 40% of the slowdown in earnings growth on the basis of the growth accounting decomposition. These results are as robust as those reported in Freeman, 1993 and Ferguson, 1996, or Gordon (1996). Growth in total capital less OCA per worker, is positively related also to earnings growth (though the coefficient is significant only in the pooled regressions), and fall-off in capital investment accounts for about 20% of the slowdown in earnings growth. Davis and Haltiwanger (1991) find that plant-level wages are positively associated with capital intensity. In annual time-series regressions, TFP growth is a positive and highly significant (at the 1% level) determinant of earnings growth. In contrast, in the pooled time-series, cross-industry regressions, the coefficient of TFP growth is negative and significant. This latter result is not so surprising since low productivity growth sectors, such as finance, insurance, real estate, and business services, enjoyed higher wage increases than high productivity growth manufacturing industries in the postwar period. This result is also not inconsistent with the findings of Bartel and Sicherman (1999) that industry wage premia are not correlated with industry rates of technological change, although it does appear to conflict with the Allen’s (2001) finding that industry wage differentials are correlated with industry TFP growth.18 The results of the growth accounting exercise, however, indicate that the slowdown in TFP growth after 1973 accounts for between 23% and 25% of the decline in wage growth between the two periods. These results imply first that industry earnings are influenced primarily by productivity growth economy wide, not in the particular industry. Leslie (1985) reports a similar result on the basis of regression analysis for labor productivity growth on 20 two-digit manufacturing industries over the period 1948–1976, which is logical since labor market forces tend to equalize wages across industries unless there are barriers, such as imposed by union membership, to cross-industry labor mobility.19 R&D investment is found to have a positive effect on earnings growth in both the time-series and the cross-industry regressions, but in neither case are the coefficients of R&D investment statistically significant.20 R&D investment also played an unimportant role in slowing wage growth, beginning in the early 1970s, based on our growth accounting exercise. Growth in skills and educational attainment does not have a statistically significant effect on earnings growth. As noted above, while earnings and education grew in parallel after the end of World War II to the early 1970s, the relation appeared to end then. And after 1973, while earnings stagnated (or declined, in the case of BLS average hourly and weekly earnings) educational attainment continued to grow. The time-series regressions do not show a significant (or even a positive) coefficient of change (or growth rate) in average schooling levels. Pooled time-series, cross-industry regressions show a small but positive effect of changes (and growth) in average educational attainment among workers within an industry on the change in average industry earnings but the coefficients are not statistically significant. The growth accounting analysis indicates that changes in educational attainment are not important quantitatively in accounting for earnings changes. As in the case of educational attainment, cognitive skills continued to growth after 1973 at about the same pace as pre-1973, while earnings flattened or declined. Thus, annual time-series regressions and pooled time-series, cross-industry regressions do not demonstrate any significant relation between gains in earnings and changes in skill levels. Moreover, as with schooling, in the growth accounting analysis skill changes are not quantitatively important in accounting for wage changes.21 The aggregate time-series results provide some, although relatively weak evidence to support the view that the falling minimum wage in the US has contributed to wage stagnation. Quantitatively, the minimum wage plays only a small role in explaining the decline in wage growth after 1973.