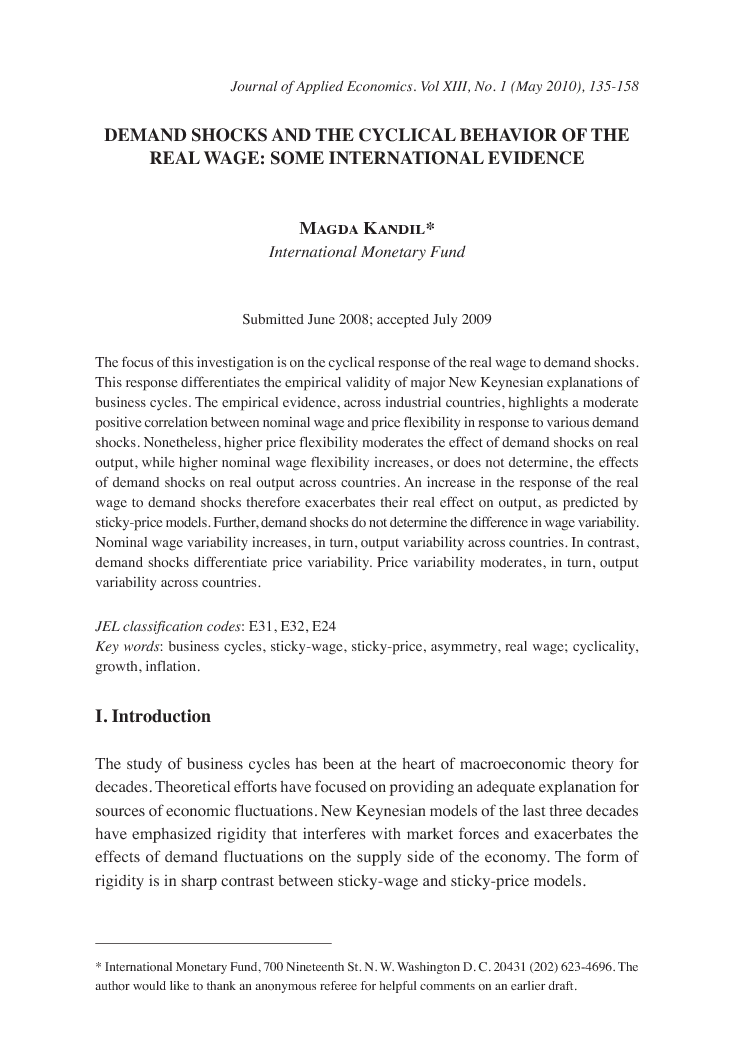 The study of business cycles has been at the heart of macroeconomic theory for decades. Theoretical efforts have focused on providing an adequate explanation for sources of economic fluctuations. New Keynesian models of the last three decades have emphasized rigidity that interferes with market forces and exacerbates the effects of demand fluctuations on the supply side of the economy. The form of rigidity is in sharp contrast between sticky-wage and sticky-price models. Sticky-wage models of the seventies and eighties emphasize the role of contractual agreements in the labor market.1 Given the cost of negotiating contracts, agents opt to change nominal wages at specific intervals. Nominal wage rigidity exacerbates cyclical fluctuations in the face of demand shocks. Specifically, a positive disturbance to aggregate demand decreases the real wage, causing output to rise above its natural (full-equilibrium) level. Accordingly, nominal wage rigidity exacerbates the countercyclical response of the real wage, increasing output fluctuations in the face of demand shocks. Sticky-price models of the eighties emphasize the speed of price adjustment in the product market to explain economic fluctuations.2 Given the cost of adjusting prices, firms opt to change prices at specific intervals. Price rigidity exacerbates cyclical fluctuations in the face of demand shocks. Specifically, constraints on price adjustment prompt producers to expand the output produced in the face of positive demand shocks. Accordingly, price rigidity exacerbates the procyclical response of the real wage, increasing output fluctuations in the face of demand shocks. Researchers have tested these theories. These studies have focused on cyclical fluctuations of the real wage.3 The evidence appears conflicting and, therefore, does not lend support to a given explanation.4 More recent developments in theoretical and empirical studies of New Keynesian macro economics have employed stochastic general equilibrium models (see, e.g., Christiano, Eichenbaum, and Evans 2005, Erceg, Henderson, and Levin 2000, and Smets and Wouters 2003). This paper studies the cyclical behavior of the real wage in response to aggregate demand shocks. The objective is to study the cyclical behavior of the real wage and the relative flexibility of the nominal wage and price. The data under investigation are for nineteen industrial countries. The analysis tests the effect of nominal price and wage rigidities on real magnitudes. In the first step, empirical time-series models are specified and estimated, and the results are compared to theoretical implications. The main upshot is that in a majority of the countries (as well as on average), price flexibility exceeds nominal wage flexibility. In a second step, cross-country differences in the output response to nominal demand shocks are related to differences in estimated measures of stickiness. The overall conclusion is that a high price flexibility relative to nominal wage flexibility contributes to smaller output fluctuations. In a third step of the empirical investigation, the variability of the real wage is broken into a price part and a nominal wage part. The overall evidence across countries indicates that price flexibility to demand shocks, in contrast to wage flexibility, is a major determinant of real wage fluctuations. Accordingly, a high price variability, relative to nominal wage variability, contributes to a smaller output variability. Overall, the combined evidence presents the following conclusion. Nominal wage flexibility in response to demand shocks is pronouncedly less significant compared to price flexibility in determining the variability of the real wage and output across countries. That is, a high price responsiveness to demand shocks tends to be crucial to dampen output fluctuations in a cross-country comparison.