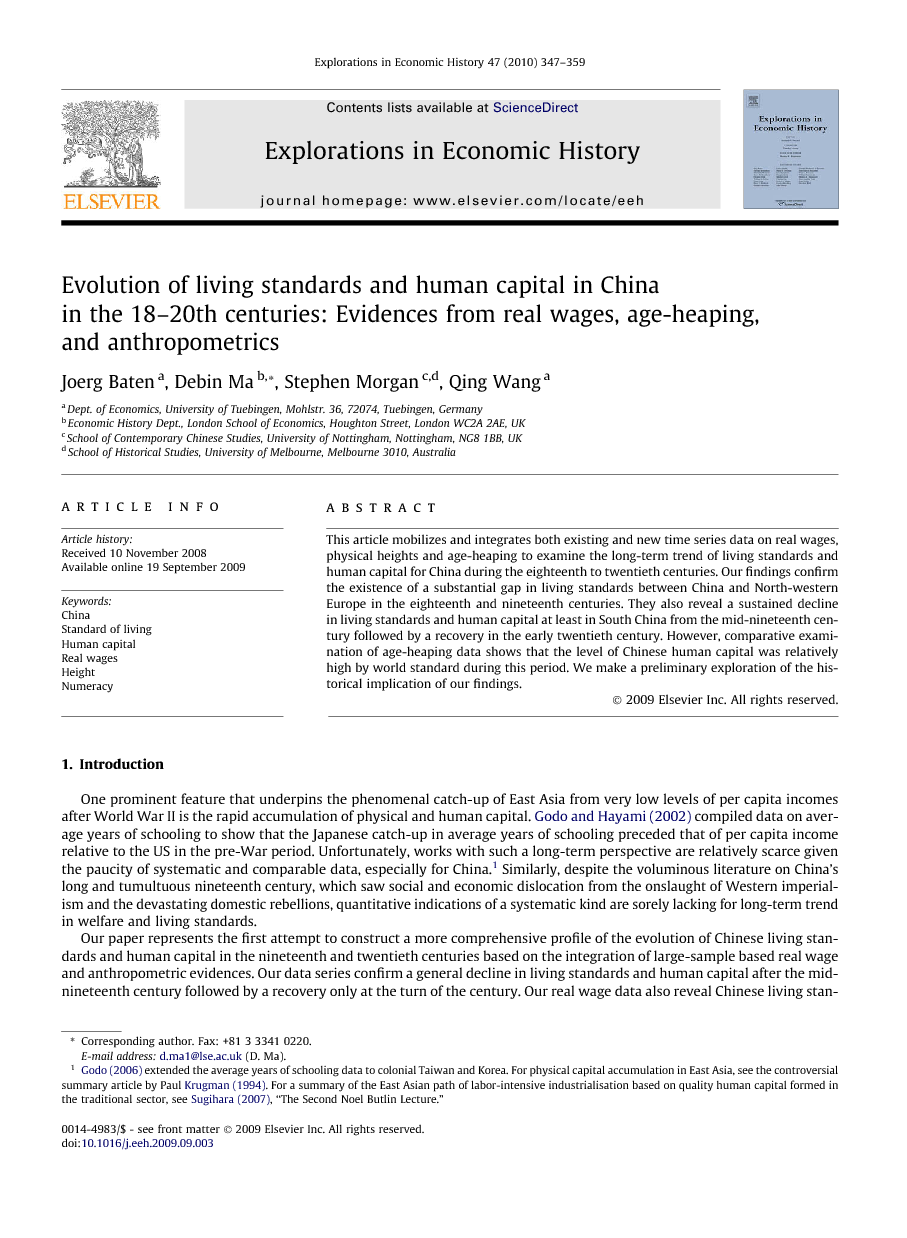 This article mobilizes and integrates both existing and new time series data on real wages, physical heights and age-heaping to examine the long-term trend of living standards and human capital for China during the eighteenth to twentieth centuries. Our findings confirm the existence of a substantial gap in living standards between China and North-western Europe in the eighteenth and nineteenth centuries. They also reveal a sustained decline in living standards and human capital at least in South China from the mid-nineteenth century followed by a recovery in the early twentieth century. However, comparative examination of age-heaping data shows that the level of Chinese human capital was relatively high by world standard during this period. We make a preliminary exploration of the historical implication of our findings.

One prominent feature that underpins the phenomenal catch-up of East Asia from very low levels of per capita incomes after World War II is the rapid accumulation of physical and human capital. Godo and Hayami (2002) compiled data on average years of schooling to show that the Japanese catch-up in average years of schooling preceded that of per capita income relative to the US in the pre-War period. Unfortunately, works with such a long-term perspective are relatively scarce given the paucity of systematic and comparable data, especially for China.1 Similarly, despite the voluminous literature on China’s long and tumultuous nineteenth century, which saw social and economic dislocation from the onslaught of Western imperialism and the devastating domestic rebellions, quantitative indications of a systematic kind are sorely lacking for long-term trend in welfare and living standards. Our paper represents the first attempt to construct a more comprehensive profile of the evolution of Chinese living standards and human capital in the nineteenth and twentieth centuries based on the integration of large-sample based real wage and anthropometric evidences. Our data series confirm a general decline in living standards and human capital after the mid-nineteenth century followed by a recovery only at the turn of the century. Our real wage data also reveal Chinese living standards were probably closer to the relatively backward parts of Europe but lower than North-western Europe in the eighteenth and nineteenth centuries. So contrary to recent revisionism (Pomeranz, 2000 and Lee and Wang, 1999), our studies confirm the traditional view that the divergence in living standards and per capita incomes between Europe and China already existed before the industrial revolution and only widened from the nineteenth century and afterward. However, in contrast to the findings based on real wages and heights, our age-heaping index – a measure of Chinese numerical abilities – reveals a relatively high level of Chinese human capital, which was closer to that of North-western Europe for eighteenth and nineteenth centuries than countries with a comparable low level of living standards. We explore the historical implication of this intriguing combination of relatively low living standards but high human capital in China at the time. The concluding section makes some preliminary discussion on the unique institutional features in traditional China, such as the Civil-Service Examination, a unified character-based language and a precocious government bureaucracy, as factors that contributed to relatively higher level of literacy and numeracy without necessarily generating sustained economic growth to support a higher living standard in the early modern era. We posit that this large reservoir of human capital in early modern China and East Asia formed important strategic factors to underpin the region’s rapid economic catch-up in the modern era once the institutional and ideological changes were accomplished. The rest of the paper is divided into three sections to discuss the findings derived from real wage, heights and age-heaping, followed by a concluding section.

By placing our new time series data in an international context, our article reveals a rather intriguing combination of relatively low living standards with high human capital in traditional China. While our finding of a relatively low standard of living counters the argument of recent revisionism, the case for a relatively high level of human capital seems to echo other historical studies. For example, Ronald P. Dore’s landmark study in 1965 offered a remarkably optimistic reassessment of Japanese education in the Tokugawa period (1603–1868). The school enrolment data in 1868 led him to conclude something like 43% literacy rate for male and 19% for girls, a remarkably high level by early modern standards (Hayami and Kito, 2004). Other studies have also pointed to the existence of a dynamic book publishing industry and book rental market as well as near ubiquitous presence of book-keeping and accounting practise among business and domestic households, and the widespread use of farm manuals (Hayami and Kito, 2004 and Smith, 1988). Evelyn Rawski’s 1979 study in many ways echoed the Japanese assessment for the case of China. Based on admittedly fragmentary and circumstantial evidence, Rawski put the basic literacy level of Chinese males at 30–45 percent and females at 2–10 percent for China as a whole (Rawski, 1979, p. 22–23). According to her, both opportunities for education and schooling had expanded during the Ming (1368–1644) and Qing (1644–1911) period. More importantly, education went way beyond the elites in preparation for the prestigious civil-service examinations and spilled over to a wide spectrum of the society to fulfill demand for commerce, local administration or even agricultural production (Rawski, 1979, chapter 1, Li, 2004). In comparison with Japan, Rawski argued that “if a stratified, status-fixed society such as Japan’s experienced this great demand for basic skills in reading, writing, and arithmetic among townsmen and farmers (in the Tokugawa period), a relatively open society such as China’s, where education was the key to upward social mobility, should have stimulated a similar if not greater effective demand for literacy” (p. 5). In other studies, both Rawski (1985) and Li (2004) detailed the development of a thriving private and commercial publishing industry to satisfy the demand of a large reading public forged by the homogeneity of the Chinese written character. Book publishing was highly differentiated, from scholarly encyclopedias, histories and philosophical treatises to morality plays, romance novels, Buddhist sutra and primers for all sorts of trades. In addition, cities and towns “had an abundance of posted regulations, shops signs, advertisements, and other material to read for profit and amusement” (Naquin and Rawski, 1987, pp. 58–59) and publishing was further aided by the relatively low cost of paper and Chinese style of woodblock printing (Rawski, 1985). Commercial publishing in the Yangzi region, for example, catered not only for the literate elite, but also for merchants, artisans and other non-elite readers (Li, 2001).31 Besides literacy, scholars have also presented direct historical evidence of numeracy. Li (2004), in particular, noted the widespread diffusion of popular arithmetic textbooks, the spread of abacus, and the adoption of various special numerals for book-keeping and accounting during the late Ming and Qing. A series of new research have now begun to utilize long-ignored surviving account books, which meticulously recorded transactions and various summary accounts with sophisticated traditional accounting techniques (Guo, 1982, Guo, 1988 and Gardella, 1992, for China; Jun and Lewis, 2006, for Korea). The important role of a lunar calendar in daily lives and in fact, the numerology and number-mysticism, for whatever its dubious claim to prediction, predisposed Chinese thinking to a numerical framework for scientific inquiry (Ronan and Needham, 1978). In fact, the combination of high human capital and low income level is not merely a historical phenomenon. Drawing on the results of standardized international tests, Hanushek and Woessmann (2008) show that the average test scores of Chinese students today ranked among the top end of those from OECD countries whose per capita income are several fold higher than in China. Further research should explore the possible historical root of this relatively high level of human capital accumulation, in particular its linkage with long-lasting institutions in traditional China, such as a relatively open Civil-Service Examination, a unified written character and a precocious government bureaucracy. The rise of an independent small-holding peasantry under this institutional framework turned each household into a self-contained producing and marketing unit in direct interaction with both the market and state (for taxation). It is important to note that these institutional features in traditional China had been largely designed for social control and discipline for an agrarian empire. But its unintended legacy – a relatively large reservoir of human capital in early modern China and East Asia – may have facilitated their rapid economic catch-up of in the modern era once required institutional and ideological changes were accomplished. In fact, the lags and differential pace of economic catch-up within East Asia over the past two centuries may well be an outcome of the differential timing of the institutional and ideological change. This intricate relationship between human capital and institutions for China and East Asia is a confirmation of recent theoretical and empirical insights as expounded in Glaeser et al. (2004). It serves as a fresh reminder that by focusing exclusively on the comparison of national income per capita, we may be missing the most crucial and essential factor that accounts for both the early modern great divergence and the recent convergence between the two ends of Eurasia.