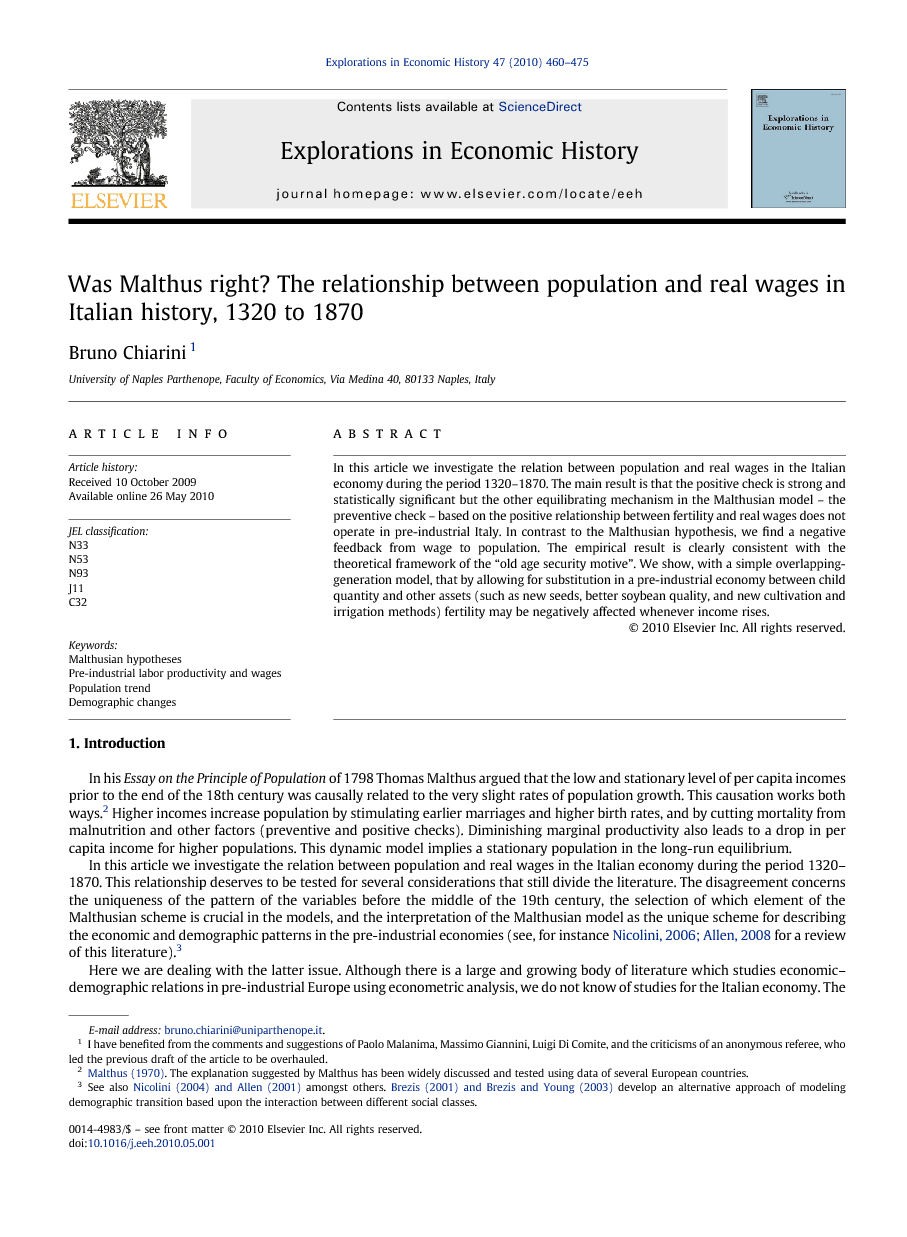 In this article we investigate the relation between population and real wages in the Italian economy during the period 1320–1870. The main result is that the positive check is strong and statistically significant but the other equilibrating mechanism in the Malthusian model – the preventive check – based on the positive relationship between fertility and real wages does not operate in pre-industrial Italy. In contrast to the Malthusian hypothesis, we find a negative feedback from wage to population. The empirical result is clearly consistent with the theoretical framework of the “old age security motive”. We show, with a simple overlapping-generation model, that by allowing for substitution in a pre-industrial economy between child quantity and other assets (such as new seeds, better soybean quality, and new cultivation and irrigation methods) fertility may be negatively affected whenever income rises.

In his Essay on the Principle of Population of 1798 Thomas Malthus argued that the low and stationary level of per capita incomes prior to the end of the 18th century was causally related to the very slight rates of population growth. This causation works both ways.2 Higher incomes increase population by stimulating earlier marriages and higher birth rates, and by cutting mortality from malnutrition and other factors (preventive and positive checks). Diminishing marginal productivity also leads to a drop in per capita income for higher populations. This dynamic model implies a stationary population in the long-run equilibrium. In this article we investigate the relation between population and real wages in the Italian economy during the period 1320–1870. This relationship deserves to be tested for several considerations that still divide the literature. The disagreement concerns the uniqueness of the pattern of the variables before the middle of the 19th century, the selection of which element of the Malthusian scheme is crucial in the models, and the interpretation of the Malthusian model as the unique scheme for describing the economic and demographic patterns in the pre-industrial economies (see, for instance Nicolini, 2006 and Allen, 2008 for a review of this literature).3 Here we are dealing with the latter issue. Although there is a large and growing body of literature which studies economic–demographic relations in pre-industrial Europe using econometric analysis, we do not know of studies for the Italian economy. The object of this article is to test, with aggregate time series, whether Malthusian positive and preventive checks operate in the pre-industrial Italian economy.4 In modern data, the relationship between income per capita and population growth is negative, which is the opposite of what the Malthus model assumes. Several authors have developed theories to explain growth takeoff where a decline in fertility is interpreted as substitution of child quantity by child quality (parents invest in education or human capital). In this case, an increase in income per capita (via investment in child quality) lowers fertility.5 In this paper we address the following two questions: is the observation of a negative relationship between wages and population a necessary and sufficient condition for a growth takeoff? We seek to answer this empirical question by using Italian data for the pre-industrial epoch to show a negative relationship between wages and population. The second question, concerning a theoretical model which supports our findings, is the following: would substitution in the pre-industrial economies between child quantity (number of children) and other assets be possible and able to affect fertility negatively? To support this interpretation we use a very simple overlapping-generation economy to emend the Malthusian model of Ashraf and Galor (2008) with the old wage security motive assumption. We show that the rise in income per capita may not generate an increase in population. With regard to the empirical analysis, starting from preliminary statistical analysis based upon the decennial frequencies data set provided by Malanima, 2002, Malanima, 2003, Malanima, 2005 and Federico and Malanima, 2004, we perform a time series analysis to test whether this hypothesis fits the observed patterns in wages and population in pre-industrial Italy. In particular, we estimate and simulate a vector autoregressive (VAR) model. This approach was introduced into historical-demographic research by Eckstein et al. (1986) and is particularly useful in testing the Malthusian hypotheses, since both historical reconstructions and empirical estimates often explicitly impose exogeneity of population in their description of the model. In the Malthusian context, imposing this causal ordering entails ambiguity in the relationships between wages and demographic variables, and simple regressions between the two variables would provide misleading results. In VAR models all variables are treated as being a priori endogenous, and allowance is made for rich dynamics. Among the main results of the article we find that a better standard of living (measured as an increase in rural real wages) does negatively affect population: one of the key elements to restore the equilibrium in the Malthusian scheme did not operate in Italy in the epoch considered. At least in the pre-industrial age in Italy, and in contrast to the Malthusian hypotheses, a negative relationship between wages and population does not seem to be a necessary and sufficient condition for growth takeoff. The article is organized as follows. Section 2 reviews a selected literature on Malthus's assumptions, pointing out the causal ordering that many works impose in reading facts and estimating models. Section 3 reports the theoretical model. Section 4 discusses the data set and analyses the dynamics of population and real wages in agriculture. In this section we study the statistical characteristics of the available time series. Section 5 reports estimates and simulations of the real wage–population relationship using a VAR cointegrated model. A summary of the main results and implications ends the article.

In the Introduction we addressed two questions concerning the observation of a negative relationship between wages and population in pre-industrial Italy and the theoretical framework used to explain this result. We presented a simple model whereby substitution between child quantity (number of children) and other assets was allowed, and found that it is able to affect fertility negatively when income rises. We answered the empirical question by estimating and simulating a vector error correction model (VECM), showing a negative relationship between real wages and population for pre-industrial epoch in Italy. This does not confirm earlier findings for several European countries although our econometric analysis is a novelty for Italy. Clearly, this result may have implications for the Malthusian income-population feedback (the standard explanation for economic stagnation in the pre-industrial era): living standard and population growth were not positively related. For the empirical analysis we used a VECM model, which is particularly suitable for describing the data generation process (the mechanism underlying the observable phenomena of interest) of a small set of time series variables when these are driven by a common stochastic trend. This method brings the nature of the observed data to centre stage, and restrictions are usually imposed with statistical techniques instead of prior beliefs based on theoretical considerations. Our VECM estimates show two important features of the long-run relationship between income and population. First, the long-run elasticity of population size with respect to the real wage is − 0.335 whereas the estimated stationary relation implies that an increase in population reduces, in the long run, real wages by almost 3 per cent. Although these “elasticities” are only indicative and impulse response analysis, taking into account the full system, may provide a more reliable conclusion, the results show a wage which is much more sensitive to changes in population than what emerges from other estimates, and a population which reacts negatively to change in wages. Second, the VECM allows us to have information on the speed of adjustment of the variables to the stationary (equilibrium) relation. Our estimates indicate that the speed of the adjustment of wages is slow: 17% of the disequilibrium is removed in a decade. The speed of the adjustment of population is even slower: only 11% of the disequilibrium is removed after a decade. If a transitory shock impinges upon the determinant of the birth and mortality curves, changing the population equilibrium, ceteris paribus, it would take the population roughly nine decades to restore the equilibrium, whereas it would require less than six decades of changing real wages. The negative feedback loop, whereby in the absence of changes in technology the size of the population will be self-equilibrating, is quite slow. At least in pre-industrial Italy, and in contrast to the Malthusian hypothesis, a negative relationship between wages and population does not appear to be a necessary and sufficient condition for growth takeoff. This is a stylized fact also shown by modern data in many less developed regions.42 A number of extensions of this analysis are called for. Instead of dealing with aggregate variables, fertility and mortality rates should be modeled. Moreover, other relevant variables would improve the relationship between demography and rural wages, such as the degree of urbanization and urban wages. We leave these further steps to future research.