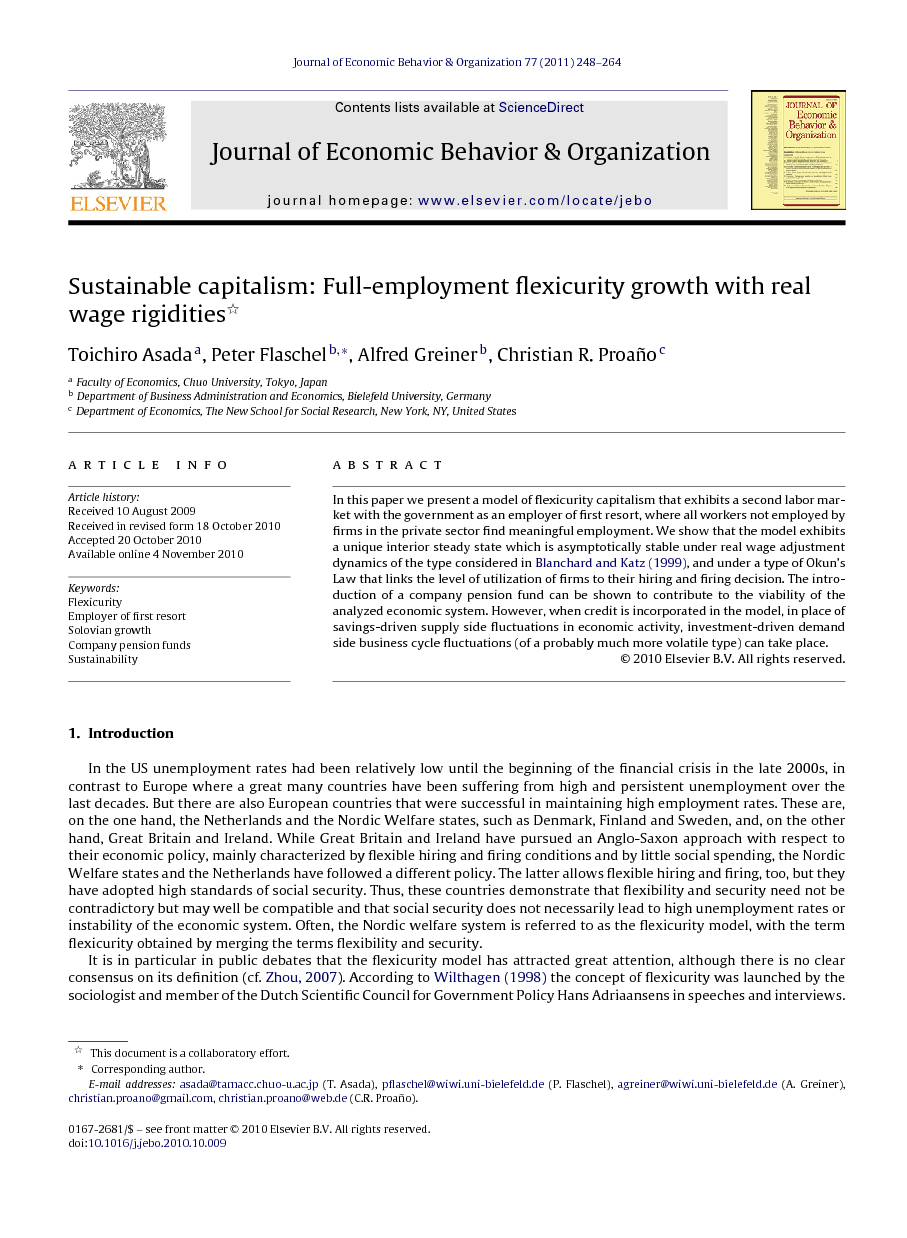 In this paper we present a model of flexicurity capitalism that exhibits a second labor market with the government as an employer of first resort, where all workers not employed by firms in the private sector find meaningful employment. We show that the model exhibits a unique interior steady state which is asymptotically stable under real wage adjustment dynamics of the type considered in Blanchard and Katz (1999), and under a type of Okun’s Law that links the level of utilization of firms to their hiring and firing decision. The introduction of a company pension fund can be shown to contribute to the viability of the analyzed economic system. However, when credit is incorporated in the model, in place of savings-driven supply side fluctuations in economic activity, investment-driven demand side business cycle fluctuations (of a probably much more volatile type) can take place.

We have shown in this paper that a model of flexicurity capitalism can be formulated, exhibiting a second labor market (and an employer of first resort) where all workers not employed by private firms find meaningful employment. This economy is characterized by viable and attracting balanced reproduction schemes. Hence, we have been able to demonstrate that a capitalistic system which is characterized by both flexibility and social security is a stable and, thus, sustainable system. Social security in our model means that retired workers get pensions from a pay-as-you-go system and from firms that administer a pension fund that is built up through savings of active workers. In addition, workers not employed by firms receive solidarity payments and meaningful occupation from the government. This shows that our social security system is rather complex but, nevertheless, allows convergence to a steady state. In case of a sufficiently flexible labor market the convergence is even monotonic implying that transitory business cycle fluctuations can be avoided. In technical terms, the model exhibits a unique interior steady state which is globally asymptotically stable. We could show this by concentrating on the private sector of the economy, the dynamics of which are characterized by insider real wage adjustment dynamics of the type considered in Blanchard and Katz (1999),9 and on a type of Okun’s Law that linked the level of utilization of the insiders of firms to their hiring and firing decision. Since both of these laws of motion refer only to the first labor market and, thus, only to a part of the whole workforce, the fundamental equation of the Solow (1956) growth model has appeared only as an appendix to this core dynamics, describing the evolution of the total labor supply per unit of capital in addition. A further fundamental law concerning the viability of the economy was the law of motion of company pension funds per unit of capital which was shown to lead to a viable steady state level of it when the labor-supply capital ratio is bounded by above in an appropriate way. The existence of such pension funds allows in principle to add credit (out of these funds) to the considered flexicurity model which, when such credits are delivered in physical form, would not question the supply side orientation of the model; see Flaschel et al. (2008b) for details. This, however, changes when paper credit is added to the model implying that investment demand can now depart from the supply of savings in which case we get an IS-equilibrium on the market for goods that generally differs from the supply of goods through profit-maximizing firms. In place of savings-driven supply side fluctuations in economic activity we then have investment driven demand side business cycle fluctuations of a probably much more volatile type. This situation is modeled and analyzed in Flaschel et al. (2008a). It represents one litmus test for the proper working of flexicurity capitalism, since supply side growth may be too stable a situation in order to really test the strength of economies that are designed on the basis of the flexicurity approach. In such a situation it has to be tested in detail, also numerically (since the resulting 5D dynamics are of a fully interdependent type), how the hiring and firing parameter βe influences the performance of the economy. In addition, prudent fiscal and monetary policy may then be needed in order to preserve the stability features we have shown to exist for our supply side version of flexicurity growth in this paper. The investigation of such topics must be left for future research however.