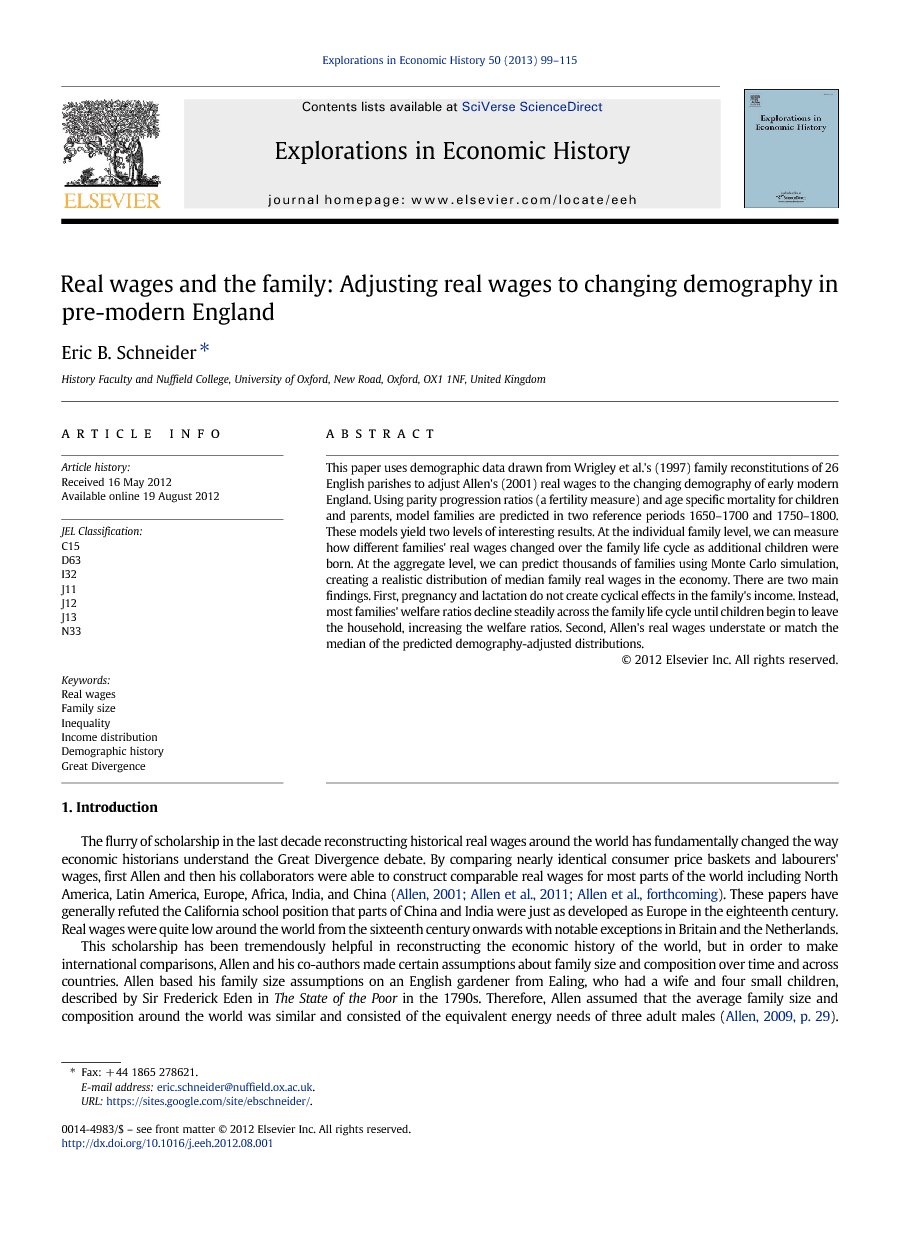 This paper uses demographic data drawn from Wrigley et al.'s (1997) family reconstitutions of 26 English parishes to adjust Allen's (2001) real wages to the changing demography of early modern England. Using parity progression ratios (a fertility measure) and age specific mortality for children and parents, model families are predicted in two reference periods 1650–1700 and 1750–1800. These models yield two levels of interesting results. At the individual family level, we can measure how different families' real wages changed over the family life cycle as additional children were born. At the aggregate level, we can predict thousands of families using Monte Carlo simulation, creating a realistic distribution of median family real wages in the economy. There are two main findings. First, pregnancy and lactation do not create cyclical effects in the family's income. Instead, most families' welfare ratios decline steadily across the family life cycle until children begin to leave the household, increasing the welfare ratios. Second, Allen's real wages understate or match the median of the predicted demography-adjusted distributions.

The flurry of scholarship in the last decade reconstructing historical real wages around the world has fundamentally changed the way economic historians understand the Great Divergence debate. By comparing nearly identical consumer price baskets and labourers' wages, first Allen and then his collaborators were able to construct comparable real wages for most parts of the world including North America, Latin America, Europe, Africa, India, and China (Allen, 2001, Allen et al., 2011 and Allen et al., forthcoming). These papers have generally refuted the California school position that parts of China and India were just as developed as Europe in the eighteenth century. Real wages were quite low around the world from the sixteenth century onwards with notable exceptions in Britain and the Netherlands. This scholarship has been tremendously helpful in reconstructing the economic history of the world, but in order to make international comparisons, Allen and his co-authors made certain assumptions about family size and composition over time and across countries. Allen based his family size assumptions on an English gardener from Ealing, who had a wife and four small children, described by Sir Frederick Eden in The State of the Poor in the 1790s. Therefore, Allen assumed that the average family size and composition around the world was similar and consisted of the equivalent energy needs of three adult males (Allen, 2009, p. 29). Humphries has recently criticized Allen's constant family size as being too low for England, thus making his English real wage estimates too high. There is therefore room in the literature for a careful reworking of the relationship between family size and real wages. In general Allen's family size assumption may be justifiable because of the paucity of detailed demographic information that would allow historians to precisely vary family size over time for many countries. Family size is also difficult to proxy with other demographic variables because it depends not only on fertility measures but also on the mortality of children. However, there is good demographic data for England from which we can attempt to understand how changing family size influenced real wages over time. This paper will use demographic data drawn from Wrigley et al.'s (1997) family reconstitutions of 26 English parishes to adjust Allen's real wages to the changing demography of early modern England. Using parity progression ratios (a fertility measure explained later) and age specific mortality for children and parents, model families are predicted for two reference periods, 1650–1700 and 1750–1800. We can then study how the changing size and composition of an individual family affected its ‘welfare ratio’1 over the family life cycle. The welfare ratio is the wage earned by the father divided by the consumption requirements of the family in any given year. In addition, Monte Carlo simulation can be employed to predict thousands of families in each reference period, providing a realistic distribution of welfare ratios based on the different families possible. These distributions can then be compared with Allen's original figures to measure the influence of changing family size and structure on real wages.