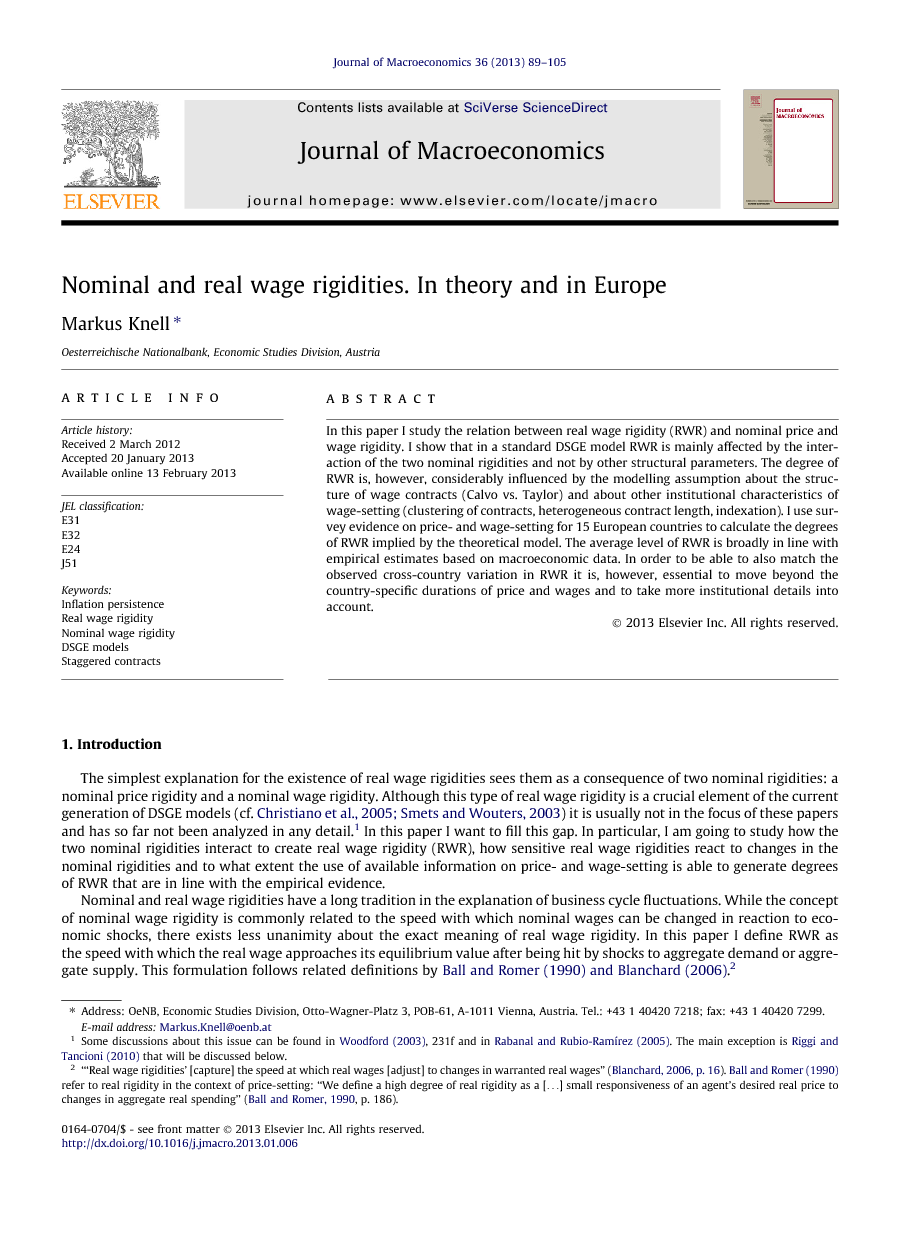 In this paper I study the relation between real wage rigidity (RWR) and nominal price and wage rigidity. I show that in a standard DSGE model RWR is mainly affected by the interaction of the two nominal rigidities and not by other structural parameters. The degree of RWR is, however, considerably influenced by the modelling assumption about the structure of wage contracts (Calvo vs. Taylor) and about other institutional characteristics of wage-setting (clustering of contracts, heterogeneous contract length, indexation). I use survey evidence on price- and wage-setting for 15 European countries to calculate the degrees of RWR implied by the theoretical model. The average level of RWR is broadly in line with empirical estimates based on macroeconomic data. In order to be able to also match the observed cross-country variation in RWR it is, however, essential to move beyond the country-specific durations of price and wages and to take more institutional details into account.

In this paper I have used a standard DSGE model to show that the synchronous presence of a nominal price and a nominal wage rigidity leads to real wage rigidity. I found that the institutional details of wage determination can have a considerable impact on the extent of RWR. If wages are assumed to be set for a fixed length of time (Taylor wage contracts) then the resulting real wages are less rigid than in the case of Calvo wage contracts with an identical average frequency of changes. Furthermore, RWR is lower if wage-setting is clustered in particular months, if the share of flexible wages is higher and if there is less wage indexation. I have used recent survey evidence on price- and wage-setting practices for 15 European countries in order to study whether the predictions of the parsimonious theoretical model are in line with empirical estimates. The calibrated EHL model based on the survey data for the average frequency of price and wage changes implies a quarterly RWR between 0.6 and 0.8. These values are in line with empirical estimations and also with the assumptions that are typically made in models with short-cut formulations for RWR. The model with Calvo contracts and with standard Taylor contracts are, however, unable to match the observed cross-country variations of RWR. This follows from the fact that the average price and wage durations are rather similar across countries. In order to get a better agreement with the cross-country variation one has to take additional institutional characteristics of wage-setting into account. The survey data document, e.g., that European countries show larger differences with respect to clustering, contract length heterogeneity and indexation. The inclusion of these dimensions increases the cross-country variation (as measured by the standard deviation), although it is still somewhat below the empirically observed extent of variation. This shortfall is likely to be due to further institutional differences from which this paper abstracts. First, I have captured the heterogeneity of contract length by the percentage of flexible wages. In reality, however, one can also observe country-specific shares of long-term wage contracts (⩾2 years) and this could lead to more cross-country variation in the implied degrees of RWR. Second, wage-setting is also influenced by the structure of industrial relations. There are important differences in European countries with respect to coordination and centralization of wage bargaining. Knell and Stiglbauer (2012), e.g., have shown that the institution of wage leadership (that can be observed in Germany, Austria and some Scandinavian countries) implies a lower degree of inflation persistence and will—pari passu—also be associated with a lower degree of RWR. Finally, cross-country differences in employment protection and the unemployment benefit system and also in the degree of openness and in the structure of financial intermediation are likely to have an effect on the transmission mechanism and on real wage rigidity. The incorporation of these and related institutional details into standard DSGE models is a promising area for future research.