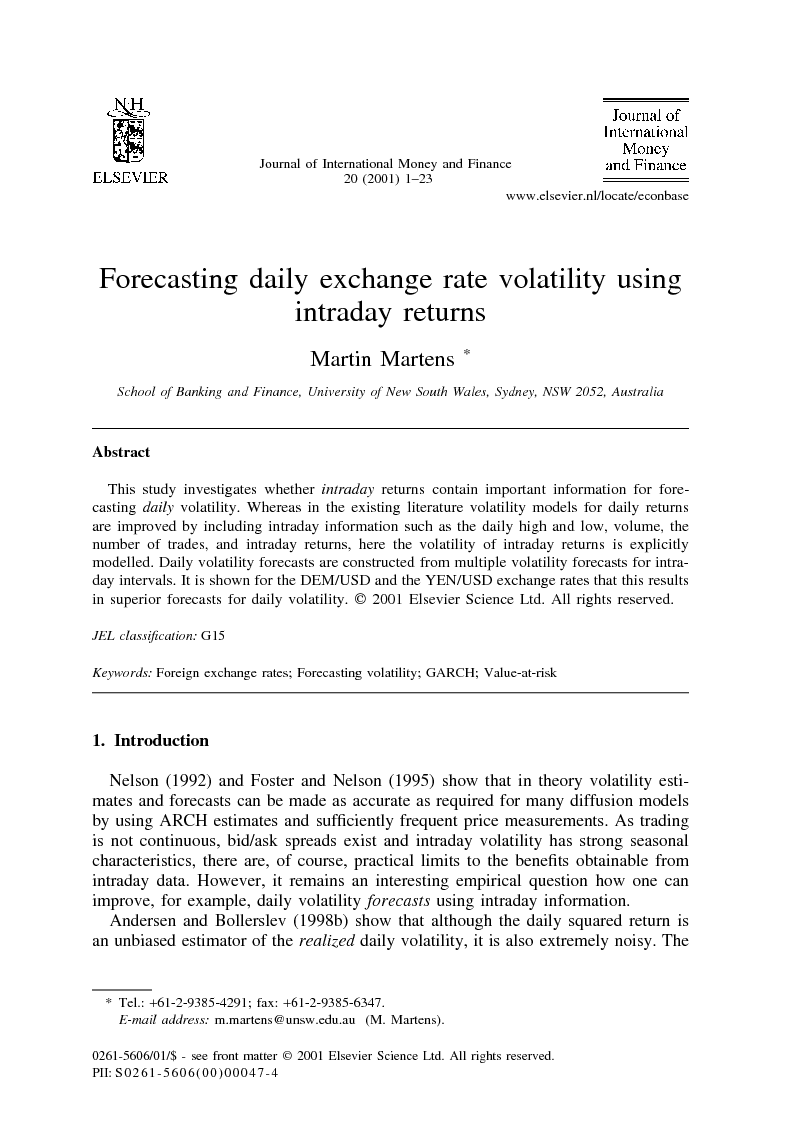 Nelson (1992) and Foster and Nelson (1995) show that in theory volatility estimates and forecasts can be made as accurate as required for many diffusion models by using ARCH estimates and sufficiently frequent price measurements. As trading is not continuous, bid/ask spreads exist and intraday volatility has strong seasonal characteristics, there are, of course, practical limits to the benefits obtainable from intraday data. However, it remains an interesting empirical question how one can improve, for example, daily volatility forecasts using intraday information. Andersen and Bollerslev (1998b) show that although the daily squared return is an unbiased estimator of the realized daily volatility, it is also extremely noisy. The sum of squared intraday returns substantially reduces the noise and should therefore be used for realized volatility. This argument should equally apply to forecasting. For example in the popular GARCH(1,1) model applied to daily returns, the conditional variance is a function of both the conditional variance and the squared (mean-adjusted) return from the previous trading day. If on the previous trading day the return was zero, but within the day prices fluctuated heavily, the lagged squared return (equal to zero) is misleading information. Other measures are then needed to capture the information that the previous trading day was actually quite volatile. This provides a partial explanation for the success of applying the daily high and low ( Parkinson, 1980, Garman and Klass, 1980, Beckers, 1983 and Taylor, 1987, among others), daily volume (Bessembinder and Seguin, 1993), number of price changes (Laux and Ng, 1993) and the standard deviation of intraday returns (Taylor and Xu, 1997). Including the standard deviation of intraday returns is very similar to replacing the daily squared return with the sum of squared intraday returns for the realized daily volatility as in Andersen and Bollerslev. Whereas in the above studies the daily model is extended by including the additional intraday information, here it is investigated whether modelling the intraday returns directly provides better out-of-sample forecasts of daily volatility. Multiple period forecasts from intraday volatility models are compared with forecasts from daily volatility models, with or without additional intraday information. These forecasts are evaluated using the new realized volatility measure of Andersen and Bollerslev. First a simulation experiment is carried out for a continuous time GARCH diffusion process including an intraday seasonal volatility pattern. The results from this experiment show that within this framework the use of higher return frequencies results in superior out-of-sample daily volatility forecasts. This is to be expected since the Data Generating Process (DGP) will be more closely approximated for higher return frequencies. It is also shown that ignoring the seasonal volatility pattern only leads to a marginal loss in efficiency. Extending the daily model with the difference between the daily high and low also improves out-of-sample forecasting, but not as much as the improvement obtained by modelling the highest return frequencies directly. Extending the daily model with the sum of intraday squared returns leads to a similar improvement as modelling the intraday returns directly. Second, empirical results are obtained from intraday GARCH models for the DEM/USD and YEN/USD exchange rates. The daily GARCH(1,1) model is estimated and subsequently the parameters for the intraday GARCH models are derived using the aggregation results of Drost and Nijman (1993). The results indicate that modelling1 intraday returns and volatility improves the out-of-sample forecasting of daily volatility.2 Given the close relation between GARCH(1,1) and exponentially weighted historical volatility, and the fact that the latter is advocated by J.P. Morgan's Riskmetrics™ to calculate both daily and monthly Value-at-risk (see J.P. Morgan, 1995 and J.P. Morgan, 1996), these results have direct implications for Value-at-risk. Two alternative Riskmetrics™ volatility estimators are proposed and the empirical results show these estimators are superior to the one currently used in Riskmetrics™. The remainder of this paper is organized as follows. Section 2 describes the data and the construction of the return series. Section 3 describes the simulation experiment and discusses the different volatility models as well as the performance measures for out-of-sample forecasting. Section 4 presents the results from the Monte Carlo simulation as well as the empirical results for the GARCH models for various return frequencies. Section 5 describes the empirical results for two alternative estimators for exponentially weighted historical volatility. Section 6 presents conclusions.